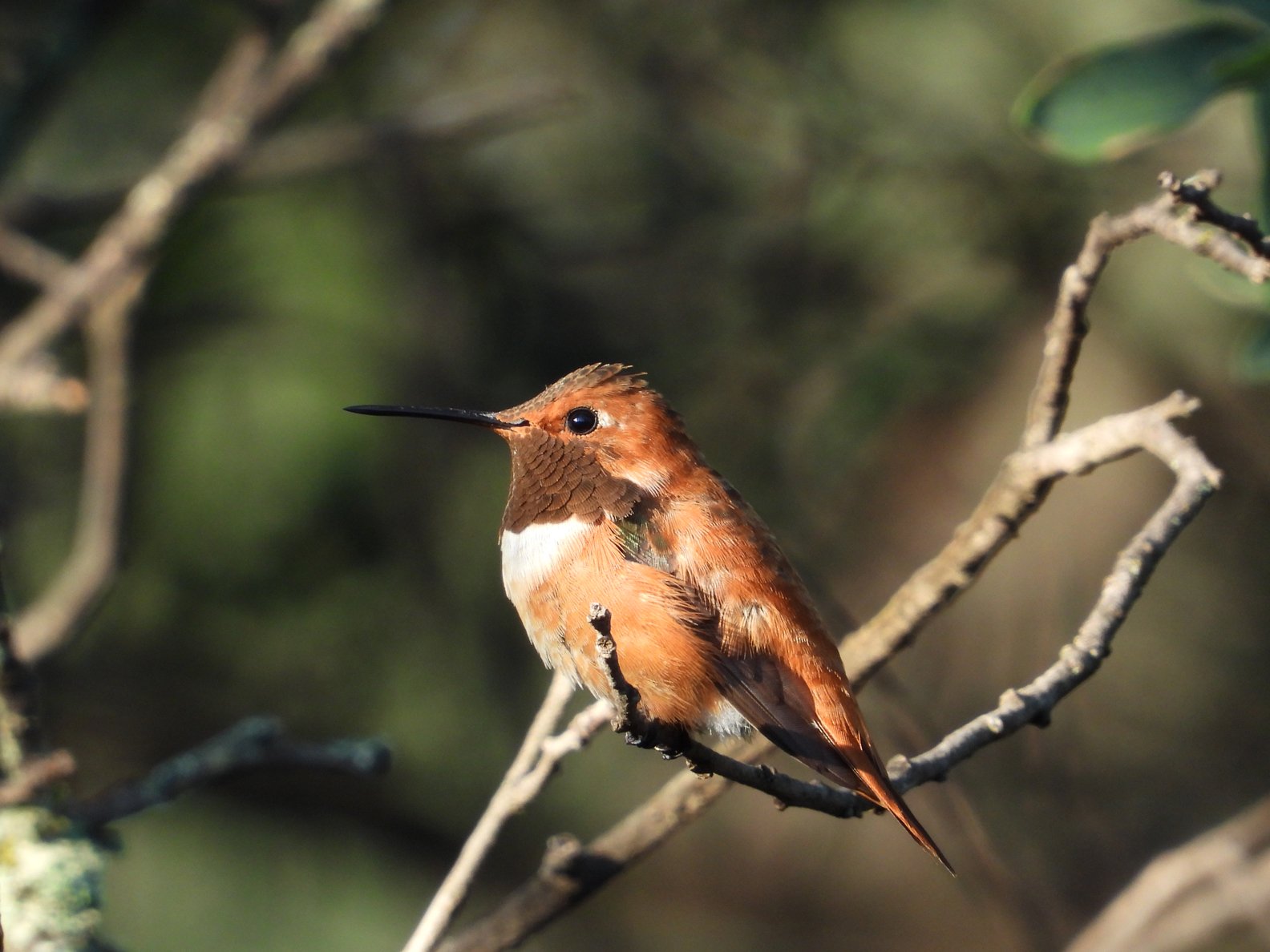 A rufous hummingbird perches on a branch in the tri-county area. Rufous hummingbirds breed farther north than any other hummingbird species and travel long distances — nearly 4,000 miles — from breeding grounds in Alaska and Canada into Mexico during fall migration. Photo courtesy Matthew Walter.
Subscribe

TRI-COUNTY — During the months of September and October, which mark the peak fall migration season for birds traveling south through Texas for the winter, residents of the Big Bend region are poised to witness uncommon transient species and, according to some experts, may even help birds on their journeys by providing vital resources.

“They rely on the habitat that we provide as a stopover habitat. They have this arduous journey of thousands of miles and they have to have food, water and shelter — those three basic requirements — on their way, so that’s why it’s important that we provide that,” said Linda Hedges, a board member of the Trans Pecos Bird Conservation organization, which puts on the popular biannual hummingbird celebration in Fort Davis.

The push to supply additional food, water and habitat for both resident and visiting bird species comes at a time where North American bird populations are known to have declined 29% since 1970, according to a Science journal published in September 2019. Grassland bird species in particular have experienced serious loss in population of more than 700 million birds. Habitat loss, collisions with manmade infrastructure, light pollution and domestic and feral cats are some of the known causes of bird population decline.

Madge Lindsay, vice president of Trans Pecos Bird Conservation, said during this time of year it is important for people to completely turn off outdoor lights at night or, at the least, turn them downward to the ground and not have them facing the sky. In addition to helping birds, which can be attracted to lights and become disoriented, shutting off nonessential outdoor lights also helps promote the area’s Dark Skies.

Another key component traveling birds require is water, said Lindsay. By setting up simple water features for birds to drink from, individuals can help them survive their journeys or better exist in their home landscapes during drought. A free online book titled, “Water for Wild Birds: Tools for Arid Landscapes,” a partnership between Trans Pecos Bird Conservation and The Borderlands Research Institute, offers solutions for how to provide sustainable water sources for birds.

Something as simple as a hose lightly dripping onto a trash can lid can be a life saving resource for migrating birds, said Lindsay, and there are techniques to employ to ensure water is being used efficiently.

“We’re not trying to encourage wasting water,” said Lindsay. “We also try to put water back into the water table just from our yards and this book tells how to do that too.”

Suet feeders, which are common and can be found inexpensively at local hardware stores, also provide a valuable food source for birds passing through, she said. At Lindsay’s home in Fort Davis she recently witnessed a barn swallow nesting in her porch fledge about five baby birds, spotted a migratory orchard oriole, and has seen many vultures, ravens and hawks kettling, a behavior where birds of prey migrate as a group. Many birds are embarking on the same migratory paths they have taken for thousands of years, said Lindsay, which makes this an interesting time of year for bird enthusiasts.

“It’s pretty exciting to know that birds have the instincts built within them to go back to their wintering grounds,” said Lindsay.

Many birds traveling south for the winter, explained Hedges, are insect-eating birds who overwinter in Mexico and Central and South America — regions where bugs can still be found. Some seed-eating species will travel to and stay in the Big Bend region. Notable birds to be on the lookout for, said Hedges, include warblers, sparrows and buntings, many of which appear this time of year. Another draw for birders right now are the migrating hummingbirds, said Hedges, who has recorded seven different hummingbird species at her feeders since mid-July.

In addition to keeping domestic cats indoors when possible and not using pesticides to ensure there are adequate bug populations for birds, Hedges said planting a garden with native plants is a holistic solution and can help provide a long term solution for our area’s resident and visiting bird populations.

“Planting native plants is useful because they tend to harbor insects; brush piles can provide good habitat,” said Hedges. “Not keeping a necessarily manicured lawn but planting plants that birds can use for perches, for shelter, as a support system for native insects and that kind of thing.”

The Big Bend Conservation Alliance, in partnership with Marfa Public Library, has also distributed free “bird care packages” for residents to area libraries in Alpine, Fort Davis, Presidio, Marathon and Marfa as well as schools in Terlingua and Valentine. In addition to covering tips for fall migration season the packages also include wildflower seeds, cosmos, which are meant to be planted in the fall in order to help migratory birds find their way home this coming spring.

To learn more about a particular migratory bird, visit allaboutbirds.org/.

To purchase native plants for your yard, reach out to Karen Little at the Sul Ross Greenhouse, (432) 837-8242 or email [email protected] or contact Patty Manning of Twin Sisters Natives in Alpine at (432) 940-1124 or [email protected]