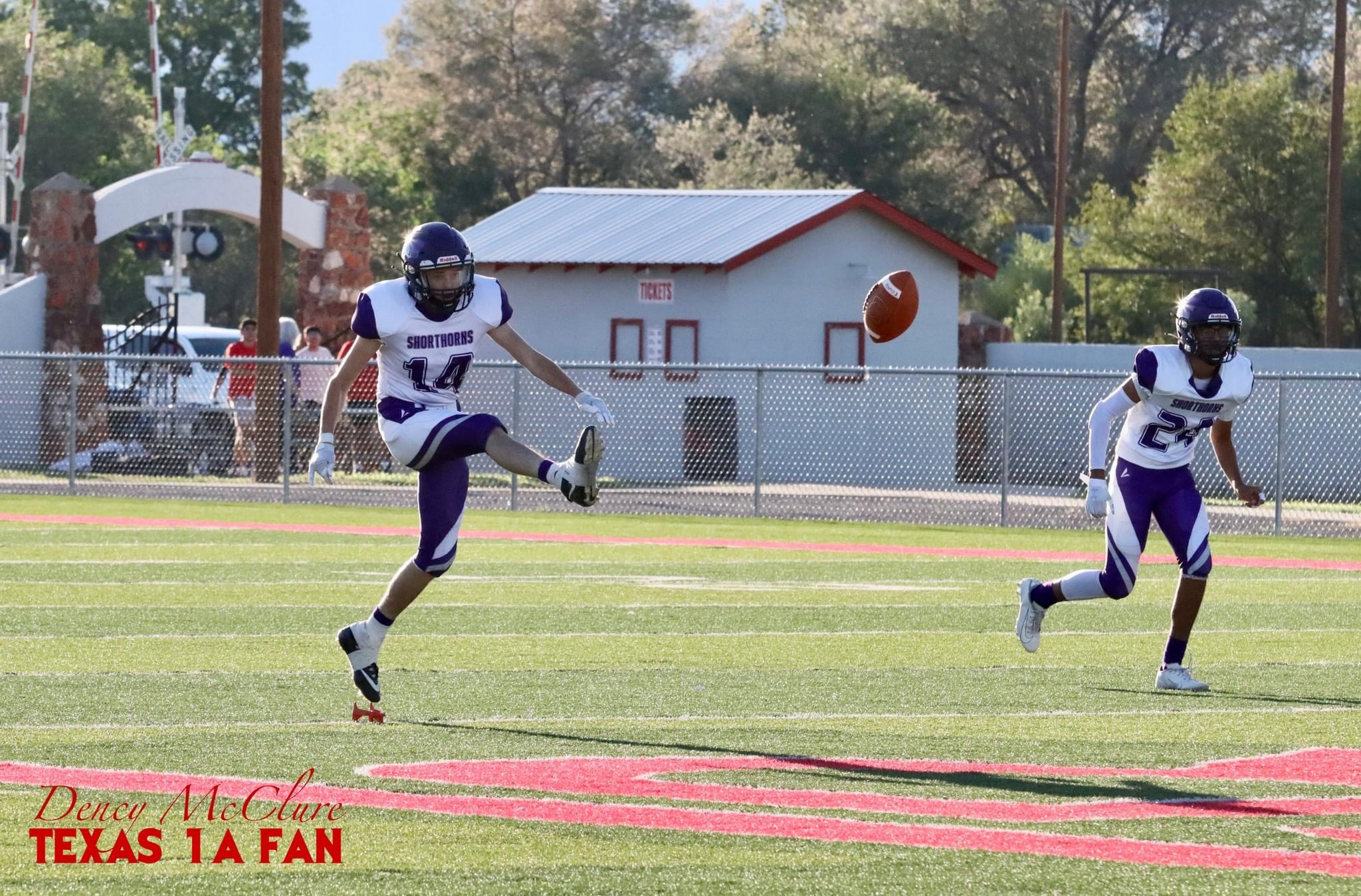 The Shorthorns walked onto Mustang Field Friday evening and swept the home team under the mosquito-filled night, bringing home a middle school and varsity victory. The junior Horns, under the guidance of Coach Arron Luna, wasted no time putting points on the scoreboard as Ayden Alvarez, Asael Zubia and Terrence Resendiz scored quickly and often to start off the first half and gave the Horns a strong offensive start. Defensively, the team held the Mustangs to one score behind defensive standouts, CJ Garcia (1 interception), Alvarez and Zubia, who recovered an onside kick on special teams initiated by kicker Aiden Gonzales. The junior Horns were victorious via mercy rule and will now host the Balmorhea Bears’ junior squad at home, Thursday at 5 p.m. at Martin Field.

As the sun set and the Friday night lights lit the night sky, the varsity Shorthorns took the field and set the tone of the game from the initial kickoff. The Horns’ lone senior, Nathan Pena, broke the goal line two times with power runs up the middle inside the 5-yard line to give Marfa the edge early on in the game. After the Shorthorns’ freshman QB went down with an injury before halftime, the team’s veteran players rallied together to put forth an incredible performance to stop the Mustangs in the final seconds of the game in order to preserve the victory.

Dustin Martinez gave Marfa a boost defensively by snagging an interception to set up the Horns’ offense on a short field that allowed Jaden Nunez to break through the end zone with a 7-yard score. Derrick Campos, the team’s leader in rushing yards, rushed for two touchdowns on a 1-toss sweep and returned a kickoff all the way home to propel the Horns past the Mustangs heading into the final seconds of the game. With five seconds remaining in the game, Fort Hancock had the ball for one final play and a chance to win, but Marfa’s defense was ready. Duo Marco Ruiz (junior) and Manny Dominguez (freshman) snuffed out the Mustang attack, bull rushing their strongest and fastest offensive threat and forcing him into an errant pass to end the game. The win brings Marfa to a 1-2 record, and the team now heads to Balmorhea this week to take on the Bears on a 7:30 p.m. kickoff.

The Marfa volleyball squad rode a four game winning streak into last Friday’s match after defeating McCamey, Presidio, Kermit and Marathon in the two weeks prior. The team is beginning to gel into the vision Head Coach Priscila Serrano had planned on early in the season, and Serrano stated that with four weeks left until the start of the district season, the Lady Horns still have to fine tune a few more things in order to have a chance at the program’s first district championship since 2019. Marfa’s outing Friday night in Fort Hancock started off rocky as the team battled self-inflicted errors and fell 0-2 to start the match. Heading into the third set, seniors Lesly Torres and Alexis Gonzales went on an offensive fury, firing off multiple kills via sets by Emily Hernandez and Ava Flores, with Torres leading the charge with four consecutive kills in the third set. The Lady Horns climbed all the way back into the match to force a fifth set against the Mustangs, but were unable to overcome the deficit and dropped the match 2 sets to 3. After making quick work of Balmorhea on Tuesday night (3 sets to 0), Marfa now looks ahead to Saturday’s game with Iraan at 12 p.m. on the road.

The Lady Shorthorns cross-country team competed at Wink Saturday and brought home a third-place finish to give them two consecutive meets with a top 3 finish. Ummi Chanez and Aundrea Garcia had a top 10 finish with a sixth- and ninth-place medal, while Ava Flores, Lesly Torres, Emily Hernandez and Liani Salcido placed within the top 29 spots. The team now heads to Lubbock Saturday for a “who’s who” in West Texas cross-country, where the team hopes to gauge what the regional competition is looking like before October arrives.

The future of Marfa’s volleyball program was on full display this past Wednesday at the Marfa Shorthorn Gym as the classes of 2030 to 2032 embarked on a new opportunity to gain more volleyball knowledge through skills and drills and have a little fun along the way. Being the first of its kind in several decades of Shorthorn volleyball, the league seeks to teach young players basic volleyball skills and give them an opportunity to showcase their skills weekly in front of their family, friends, teachers and the Marfa community. The league has 17 total players, three teams, and two volunteer coaches in Samantha Salgado and Trisha Salgado, who have spearheaded several recreational sports leagues recently to encourage youth participation in team sports.