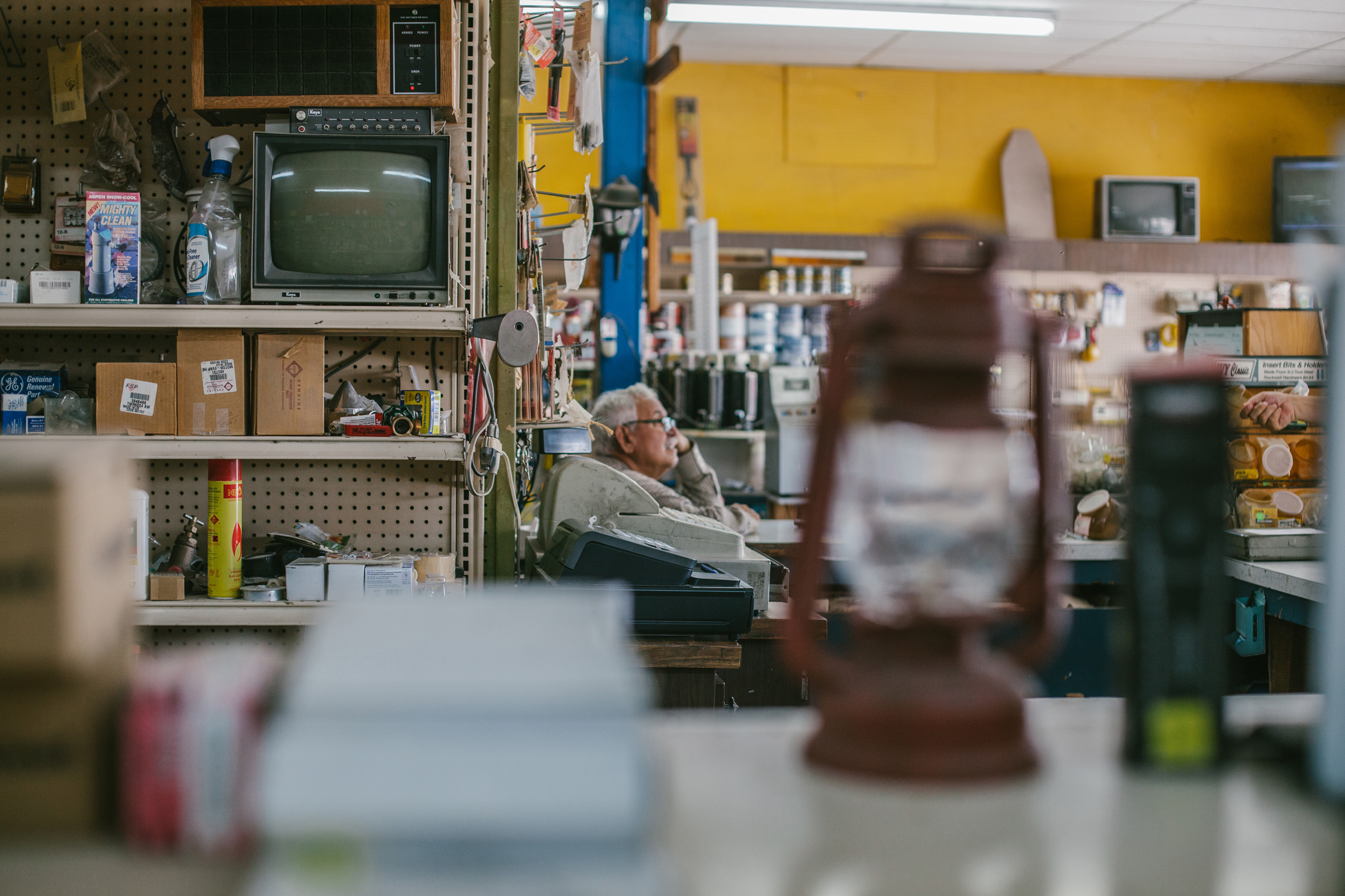 Luis Armendariz, owner of The Presidio Lumberyard, sits behind the counter where he often is found greeting incoming customers. Photo by Hannah Gentiles.
Subscribe

I first stumbled into the Lumber Yard, one of three hardware stores in Presidio, about a year ago, looking for house painting supplies. Luis Armendariz greeted me from behind the counter, where he had been sitting chatting with a friend while perched in front of a fan. While directing me to the correct aisle, he was instantly curious about my story –– asking where I was from, suspecting that I was not from the area. He was surprised when I said that I had just moved to Presidio from Marfa. Before I explained that my fiancé grew up in Presidio, he assumed that I was a Border Patrol agent. Which was a logical guess, as it is one of the very few things that brings new people to this area. As he searched for a connection to my fiancé, Ubaldo, it became clear how deep his roots to the area were. He spoke very freely, excited to share his story with a new person. He combined historical facts with outrageous things, saying them in a deadpan tone aimed at getting a reaction. When I would laugh at his comments, he would say, “Don’t laugh!” with a sassy grin. This reminded me of my own witty grandfather who passed away many years ago.

I returned many times to the store, less to find hardware supplies and more to search the aisles for treasures and have the always delightful interactions with Luis. Luis is now 78 years young, and while he often doesn’t remember my last visit or my name –– frequently still asking where I’m from –– he continues to be charming and welcoming.

The store is vast and contains many items that, Luis explained, have likely been on the shelves for a decade or more. My treasures have included vintage drawer/cabinet pulls, light fixtures and a gold bathroom soap holder, all still with their original ‘60s-era packaging and advertising displays. All of the displays are original from when the store opened in 1962 (or ‘64, he can’t remember for sure). A friend who came down from Marfa to visit scored a genuine Red Ryder BB gun that I had never seen in my trips prior and was very likely the last one.

In my handful of visits with Luis at the Lumber Yard in Presidio, I have learned much about not only his family history but the history of the area as well. Each visit, he generously digs through his office to find old photos and archives to help better illustrate his tales. He proudly showed me his high school yearbook as he spoke about the boys’ Catholic school that he and his twin brother, Carlos, were sent to in New Jersey. Both would go on to college in New Mexico, then transfer to San Antonio, where he studied accounting because he loved math and numbers. In the same year that Luis’ dad opened what remains as The Presidio Lumber Yard, both he and Carlos were drafted into the Army. They were separated into different units and sent to the Vietnam War at different times. This was the first time the twins were ever apart. He explained, “You can’t have two members of the same family in the warzone.”

They both returned home to Presidio within six months of each other. Luis found his way to Fort Leaton in the Big Bend State Park, first helping with its restoration and later as the park’s supervisor after it expanded. Luis showed me a book of photos of various events, folk dancing and art shows held at the fort, images of the flood in 1978, and my favorite: images of the late (great) Governor Ann Richards releasing a golden eagle from the peak point on River Road in the state park, known as The Big Hill.

As someone who is not originally from the area but has come to love it, it is such a treat to hear about early days in Presidio; most notably tales of his childhood in the 1940s and ‘50s. He laughed as he shared that as a boy one of his main familial roles was to sell the asadero cheese and milk made by his mother door to door. Often referred to as the “Asadero Boys” by classmates, Luis and Carlos would duck out of embarrassment when spotted by girls their age. He spoke of the nervousness he felt visiting anywhere outside of Presidio, often encountering much prejudice –– most notably, some experiences in Marfa with white ranchers where he was only treated with ease once he shared who his family was. He added, “It was ignorance; they feared anyone or thing different from them.”

He thanked me at one point for asking him to re-tell these bits of his story, following with, “If you don’t speak it you lose it,” and noting that his memory has become thinner and thinner with age. I often wish I knew more of the area’s history to understand better the references he’s making, but I am glad knowing that it serves as a pleasure for both of us. Once, Luis told me before I left the shop, “The only thing I don’t like about you, is that you’re not wearing boots — because I am full of it, and I really like to spreeeead it out,” referencing his whimsical tendency to embellish his tales from time to time. I’d argue it’s a necessary trait for most good story tellers such as himself.