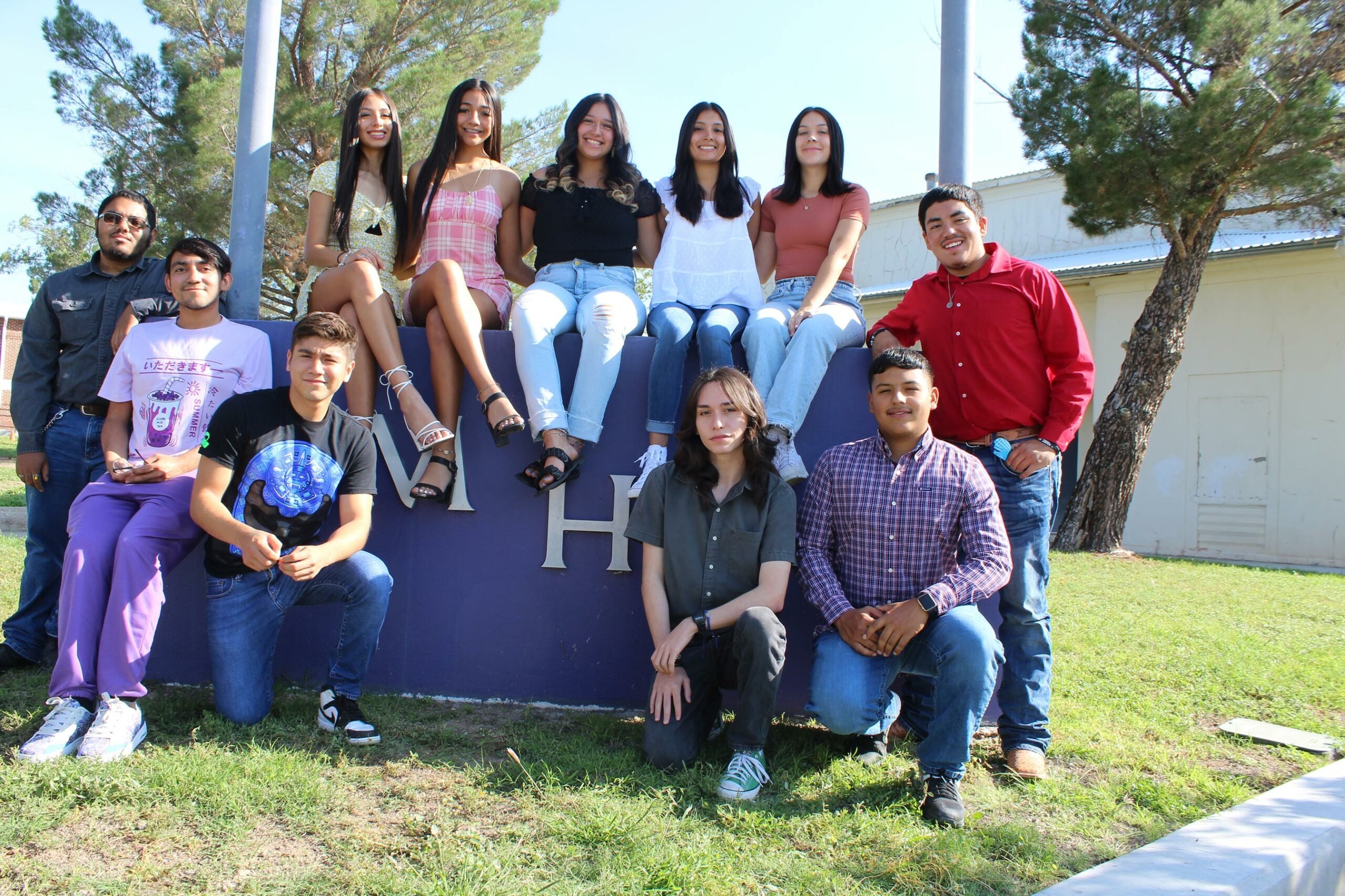 MARFA — Friday night’s football game will see the ceremonial crowning of this year’s homecoming king and queen followed by a match up between the Shorthorns and Sierra Blanca Vaqueros.

The junior high game will begin at Martin Field at 5:30 p.m. followed by the homecoming court awards at 7 p.m. and varsity football game kick off at 7:30 p.m. Ticket prices will be $2 for children and students and $3 for adults. Junior and High School Principal Luane Porter said for the seniors, as well as the underclassman, homecoming celebrations are important traditions everyone can look forward to participating in.

“It’s one of those memories that throughout the high school years, they kind of look forward to, and then especially if they get to serve on the court, it’s an additional honor,” said Porter. “It’s about building memories and a connection to the school.”

Presidio ISD will lend their marching band for Friday night’s festivities, and plan to play the Marfa school song and alma mater. There will be no homecoming dance this year, according to Porter, due to a lack of interest among students and because the sophomore class, which is in charge of fundraising for homecoming, didn’t have adequate time from the beginning of the school year to the present to raise enough funds.

But school spirit won’t be in short supply with pre-game activities: a homecoming parade will proceed down Highland Avenue at 6 p.m. Thursday evening and a pep rally will follow at 7 p.m. at the football field, where students will cheer and view a senior skit as well as the burning of the “M.”

Samuel Estrada is the grandson of Brenda Garcia and the son of Thomas Estrada. He plans on participating in powerlifting and golf.

Kayla Angelina Vasquez is the daughter of Sarah and Grady Vasquez. She participates in volleyball and Ballet Folklorico and plans on participating in basketball, softball and golf this year. 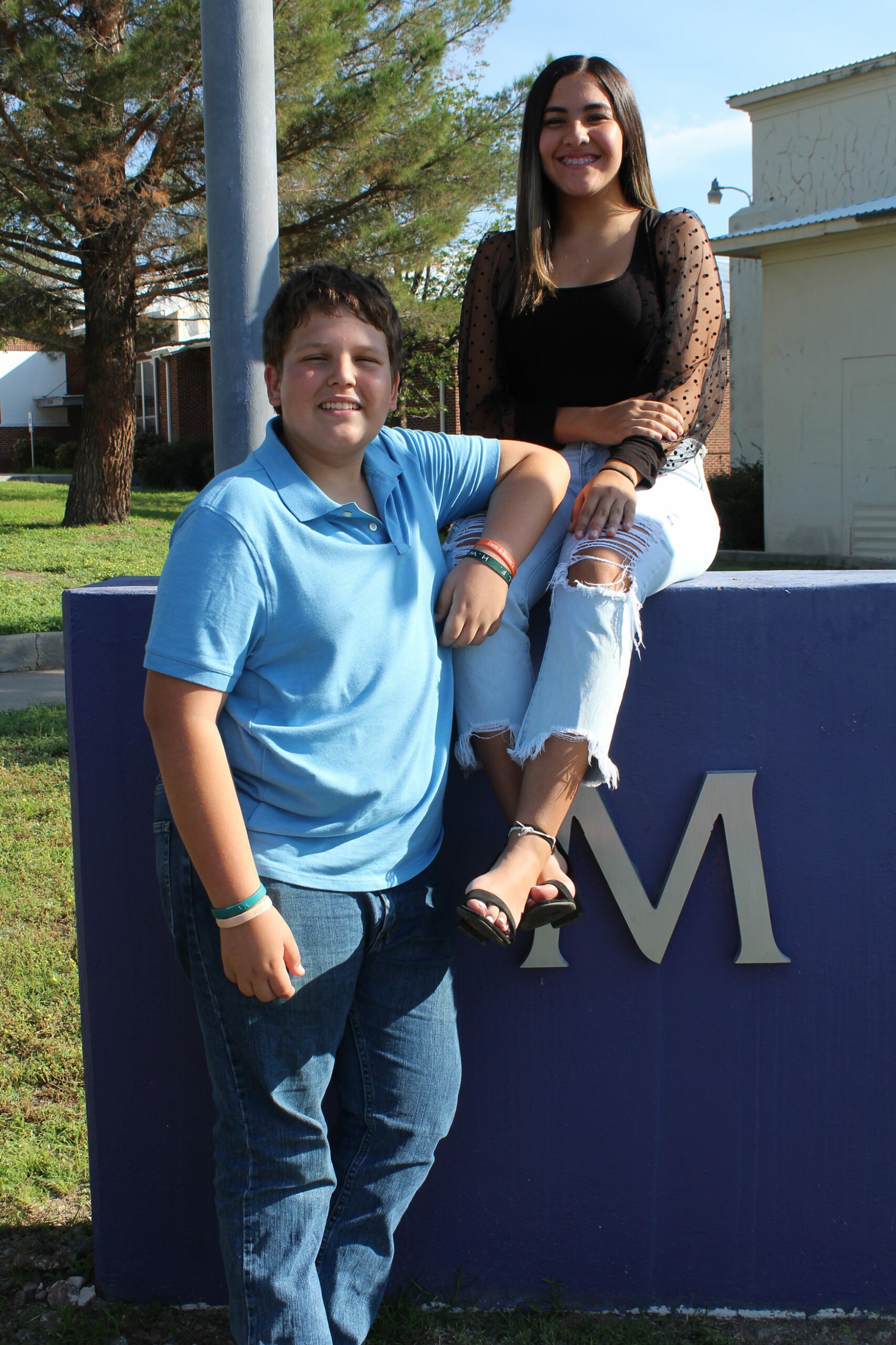 Andres Solis is the son of Mayra Del Bosque. He participates in UIL One Act Play and welding.

Maryfer Martinez is the daughter of Sandra Karina Martinez and Eric Martinez Rosas. She has been a member of the volleyball, basketball and track teams and UIL One Act Play. 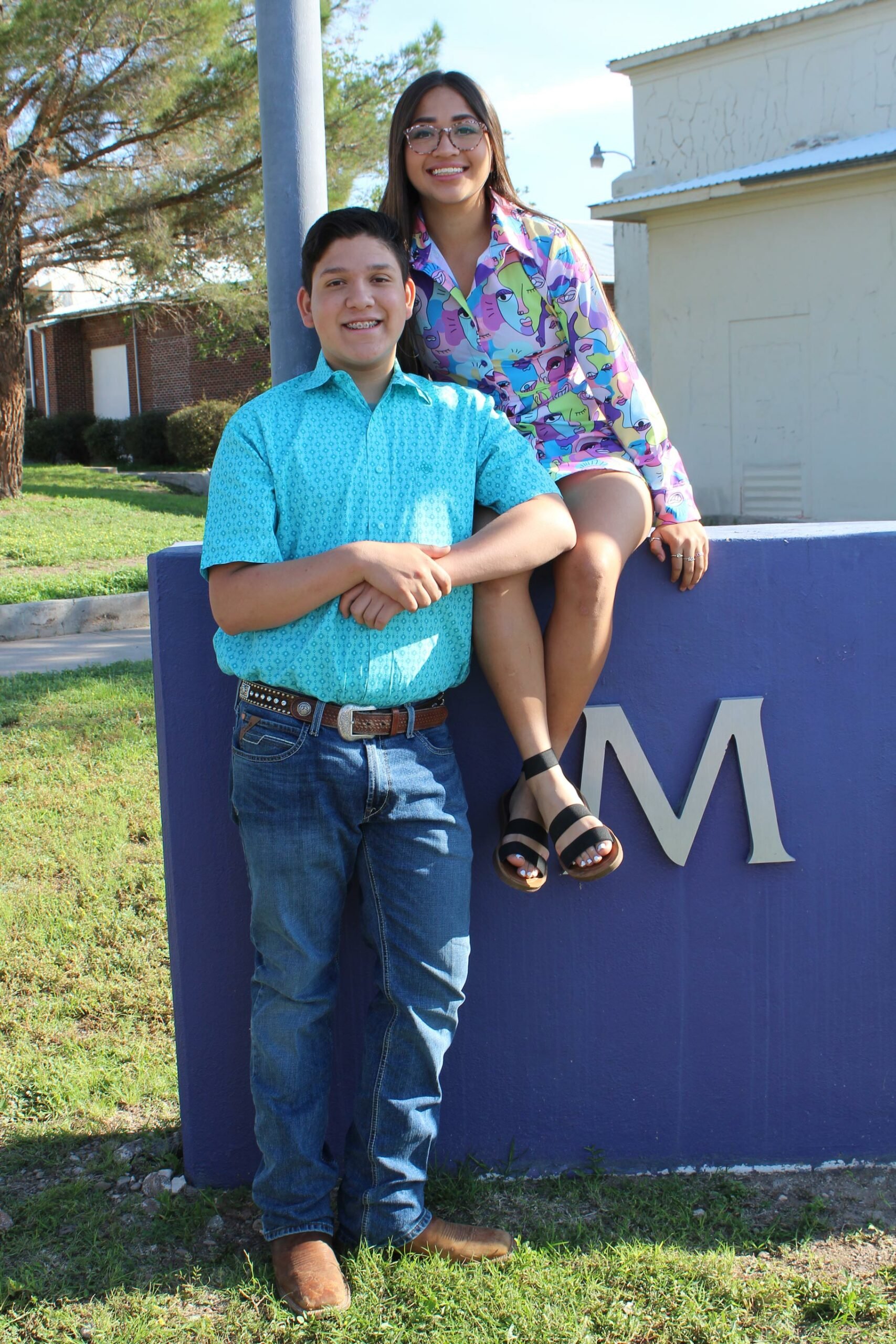 Esdras Flores is the son of Javier Flores and Yaneli Arias. In his spare time he works construction with his father’s company, KORA.

Fernanda Rivera is the daughter of Fernando Rivera and Mayra Lujan. Her sophomore year she participated in basketball, softball and welding. Her junior year she plans on participating in basketball and softball. 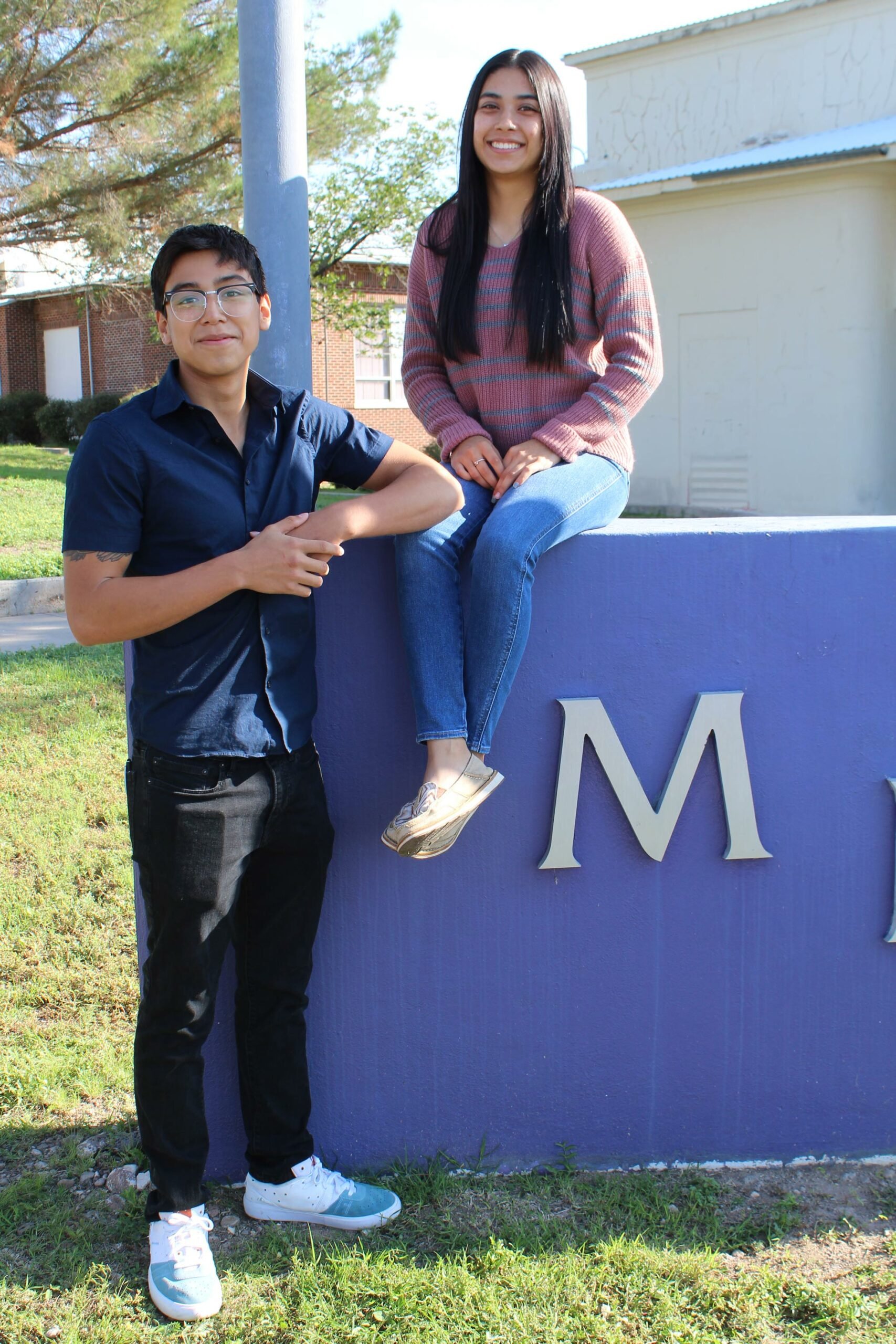 Juan Bautista is the grandson of Rosalinda and Nieves Gutierrez. He has participated in cheerleading for two years and will be on the basketball team his senior year. Juan was also crowned duke in the homecoming court his junior year. Juan worked as a lifeguard last summer, and has worked as a cashier at Porter’s after school for a year. After graduation, Juan hopes to go to the University of Texas or another state university to pursue a degree in digital art and mathematics. Juan would like to say thank you to his family and friends for being there for him. He won’t forget the memories he has with everyone. And he wishes everyone a good future and a safe and healthy 2022-2023 school year.

Nayar Flores is the son of Javier Flores and Yanelli Arias. Nayar participated in football his freshman and sophomore years. Nayar has worked in construction throughout his high school career, first for Silla and then alongside his father in the family business, KORA Construction. When he graduates, Nayar plans to continue working in construction or begin training to become an electrician and start his apprenticeship in Abilene.

Alex Luna is the son of Ari Luna and Laura Boyd. Throughout Alex’s high school career he has participated in art, yearbook, journalism and One Act Play. After graduating, Alex plans to attend college at Texas State University to pursue a career in graphic design and digital media. He remains grateful to his friends and family and is wishing everyone the best of luck for his fellow senior classmates.

Samuel Salgado Martinez is the son of Jose Raul Salgado and Norma Alicia Martinez. Throughout Samuel’s high school career he has participated in band, welding, robotics, unmanned aerial vehicles, an Architectural Foundation of San Francisco architecture course, and UIL. Samuel is an active member of YoungLife. After graduating, Samuel plans to attend college at Texas A&M Kingsville to pursue a career in mechanical engineering.

Nathan Pena is the son of Jessie and Anabel Pena. Throughout Nathan’s high school career he has been in football, track, powerlifting and One Act Play. He is also an active member of YoungLife. Nathan has worked at the City of Marfa during the summers and even started his own snow-cone stand. After graduating, Nathan plans to get his EMT basics in El Paso and hopes to join the U.S. Air Force to become an aircraft rescue firefighter.

Dimetrey Stewart is the son of Elijah Stewart and Monica Lara and the grandson of Jimmy and Rammona Lara. Throughout Dimetrey’s high school career he has participated in welding, band and UIL. After graduating, Dimetrey plans to attend Western Tech, or to pursue a career in AEP.

Aubrie Aguilar is the daughter of Tiffany and Freddy Aguilar. She designed the yearbook cover and participated in VASE her freshman year, illustrated a coloring book for the Blackwell School her sophomore year, and made it to state semifinals in the UIL Digital Animation category and advanced to the International Science & Engineering Fair her junior year. Aubrie is an active member of National Honor Society and is currently employed at the Marfa Public Library and is an intern at Ballroom Marfa. After graduating, Aubrie would like to attend a state college in Texas, where she plans to further her education in art and finance. She is very grateful to her teachers, friends, and most of all, her family for their support throughout her high school career. She hopes to make everyone proud and create many lasting memories her senior year.

Ummi Chanez is the daughter of Elizabeth Gutierrez. Throughout Ummi’s high school career she has participated in volleyball, cross-country, basketball, softball, track and Ballet Folklorico for all four years. She has also participated in cheer and One Act Play. Ummi is an active member of Marfa High School National Honor Society and Younglife. In addition to her many extracurricular and curricular pursuits, Ummi has placed in the top 20 in the state cross-country meet in Austin for three consecutive years, placing 5th her junior year, and is hoping to place in the top three at state this year. Ummi has also been a part of the all-state XC team all throughout high school, and a part of the all-star team her junior year. She has also received recognitions in volleyball for outstanding hitter of the year and second team all district, and second team all district in basketball. After graduating, Ummi plans to attend college at the University of Texas at Austin or UT San Antonio to study business and pursue a career in real estate.

Alexis Gonzales is the daughter of Rene Gonzales and Roxanne Lujan. Throughout her high school career she has participated in volleyball, basketball, track, golf and softball for all four years. She has also participated in cross-country, cheer, and One Act Play. Alexis is an active member in the National Honor Society, student council, and Younglife. In addition to her many extracurricular and curricular pursuits, Alexis received many recognitions throughout the years for her athletic involvements, advanced to state in golf, and advanced to nationals in the International Science Fair in Atlanta, Georgia. Alexis has worked at the Waterstop and has helped with building projects in Marfa. After graduating, she plans to go into the workforce to join Border Patrol, AEP, or pursue a degree in criminal justice.

Emily Hernandez is the daughter of Jimmy Hernandez and Amber Serrano. For all four years of Emily’s high school career she has participated in volleyball, basketball and softball. She has also participated in cross-country, track and cheer. Emily is an active member in the National Honor Society, One Act Play and Younglife. In addition to her many extracurricular and curricular pursuits, Emily received many recognitions throughout the years for her athletic involvements, including first team all-district for volleyball and second team all-district for softball. Emily worked at the Waterstop her sophomore year, and plans on getting another after-school job when she completes her softball and track seasons. After graduating, Emily plans to attend college to study engineering in order to become a mechanical engineer.

Maribel Meraz is the daughter of Oscar Meraz and Arlene Acosta, and granddaughter of Luis Alverez and Nora Lujan. During Maribel’s high school career she participated in basketball her freshman year and plans on playing again her senior year, as well as participating in track and softball her senior year. Maribel is also an active member of YoungLife. After graduating, Maribel plans on attending The University of Texas at El Paso to pursue a pre-med degree before continuing onto a doctorate in medicine in hopes of one day becoming a cardiologist.

Lesly Torres is the daughter of Julio and Elida Torres. Throughout Lesly’s high school career, she has participated in volleyball, basketball, cross-country, cheerleading, track, golf, softball, One Act Play and Ballet Folklorico. Lesly is an active member of NHS, student council and YoungLife. After graduating, Lesly plans to attend the University of Texas at El Paso to study kinesiology. She has also been invited to try out for the Universal Cheerleaders Association to help coach younger people that want to follow their dreams and become cheerleaders, and plans to pursue that upon graduation.

MISD homecoming
Stay in touch with The Sentinel
Related