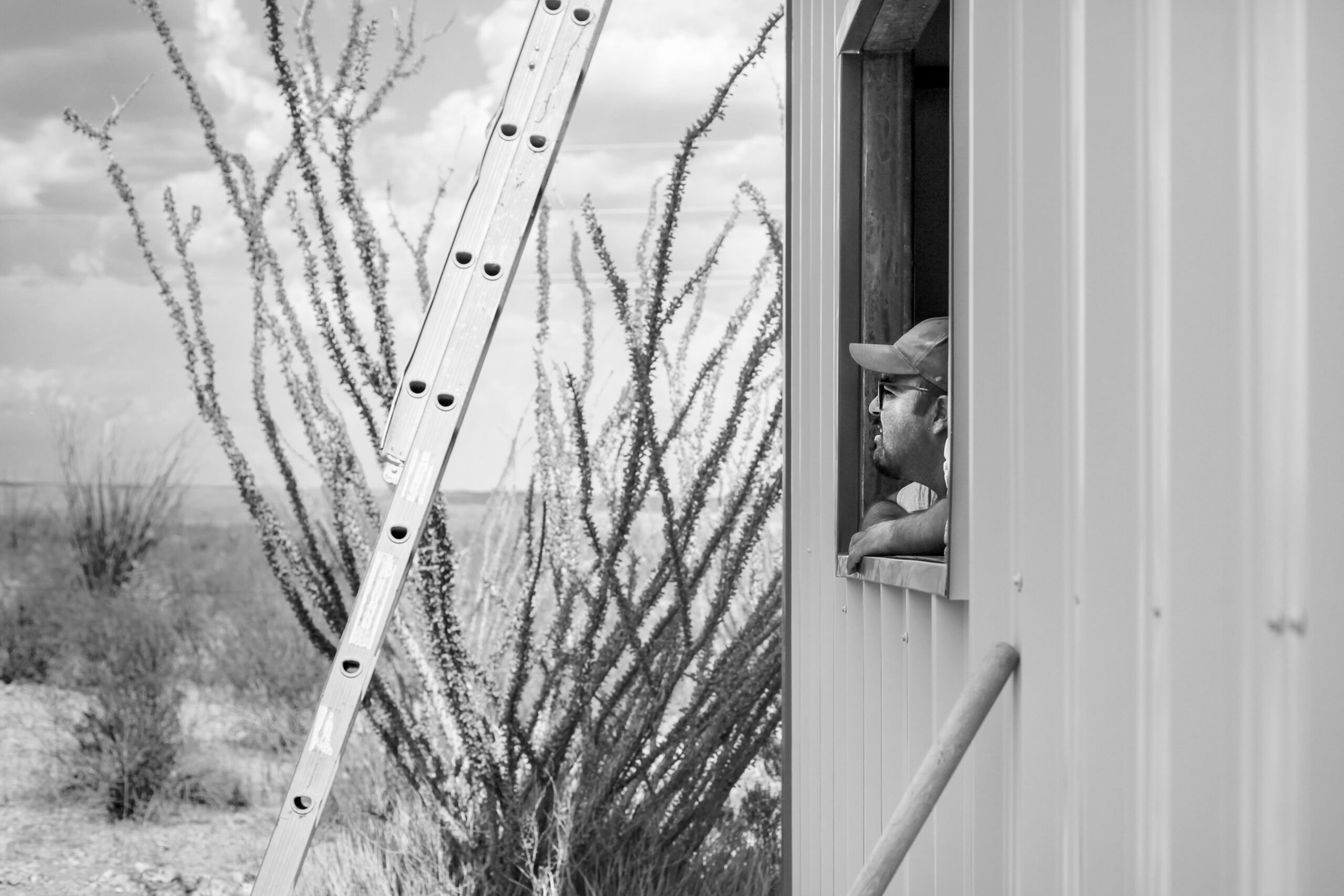 Ramon Deanda looks out the window at the printmaking studio he is building on his open land just outside of Presidio, Texas. Photo by Hannah Gentiles.
Subscribe

In early August, Ramon met me in his tractor at the intersection of Hwy 67 and the dirt road that leads to his studio. He doesn’t technically have an address yet, and the dropped pin via Google maps led me down a wrong dirt path, so I was relieved to see his bright orange tractor waiting off the main road to guide me in. Ramon’s property is several miles outside of Presidio. He had long dreamt of finding land in/near his hometown of Presidio/Ojinaga with hopes to create studio space among the surrounding desert landscape. His dream came to fruition several years ago when he was offered a great deal through a family friend. Though it lacked access to water/electricity, he was not deterred. Only recently, he’s gotten the green light to start building, and with his dad’s help, they hit the ground running. He taught art in New Mexico prior to returning to Presidio to spend some quality time building the studio and work on various other projects on the “ranch.”

He has many visions for his land. Most recently, he’s begun dreaming of creating a space that invites fellow artists to retreat and work on their projects. Finding inspiration in the surrounding landscape is not hard to imagine –– it’s beautiful. While an artist retreat has become commonplace in Marfa, Presidio has yet to offer anything of the sort. In addition to an artist retreat he would focus on creating community printmaking space, with dreams of local art classes and artists coming to the studio to learn and practice their own art.

I arrived at his studio just after a very brief rainstorm, on my 10-minute drive up from Presidio. (In the vastness of Far West Texas, it is not uncommon to get hit by something like this, usually lasting all of a few minutes before a return to sweltering temperatures.) Looking out the back, Ramon pointed towards the Chinati Mountains, where more rainstorms were approaching. He noted that while at the ranch he learned the directional patterns of such storms as he pointed to a different storm slightly to the east that would likely reach us.

While outside, he showed me the various projects he’s working on: the new yucca trees he’d just put in the ground, the ladder up to the solar panels he’d installed on the roof, the gazebo Ramon and his dad had built, the stone tiles on the floor of the studio he laid, and of course, the tractor he guided me in on that has made all projects easier. When I hear of folks navigating home projects like these, on their own, I always feel inspired to try some of my own. Moving out to West Texas was the first I’d ever seen quite so many people taking on such extensive home projects for themselves. It seems to be one of the many survival skills you learn when living in such remote places; you just learn to do it yourself.

With the winds picking up, we retreated inside while continuing our chat about Presidio; discussing both the frustrations we’ve felt as well as the extensive potential we see and our hopes for positive growth. We brainstormed ideas and shared our personal stories that connect us to the area. Ramon impressively serves on both the Presidio Convention and Visitor Bureau as well as the Consejo Cultural Ciudadano de Ojinaga; he is actively a part of helping to bring new opportunities and activities to both sides of the border.

Ever since I began dating my fiancé seven years ago and started making the hour drive south from Marfa to visit him, it has felt like a distinct privilege to be a part of this unique community. One that, while vastly different from the one I grew up in, has been endlessly welcoming. I have always felt the differences and similarities between the north and south of the county results in an ideal balance, continuously creating space for clarity and inspiration and perspective. Conversations like this one contribute to that feeling.

The storm approached us, as predicted. Initially, it was simply strong winds. But then the rain began to fall, and in no time we were moving from the right side of the building where we sat chatting, to the left, which already had windows to block the incoming weather. We teetered between continuing conversation and disbelief at how strong the storm continued to be. This had only been the second or third storm he’d seen come through this year. And frankly, I’d never witnessed a storm of this length and intensity. At one point rain was blowing horizontally through the building’s windowless/doorless openings. This would arguably be a sign of the extreme rain that would soon come to the area a couple weeks later, flooding the Rio Grande.

I later learned that this unique weather event was a “microburst,” which can be the equivalent of an F1 tornado, and that’s exactly what it felt like. After the storm we walked around the property assessing any damage, crossing the newly formed arroyo only feet from the building. He’d never seen it flow like this and excitedly sent videos to his parents in town, who hadn’t received nearly the same amount of rain. Rain is a rare occasion out here. At one point during the storm, Ramon commented, “This is like a rock concert to us, high entertainment.” We worried I wouldn’t make it out over the new arroyo, but thankfully, I did.

I look forward to watching as Ramon’s studio continues to morph and come to fruition, and the ways that this bold endeavor will contribute to create new opportunities and conversations in Presidio. Find him on Instagram at @ramonchis_07 to follow along with the creation of this new project and all of his work. Ramon has a handful of murals in Presidio — most strikingly, an homage to Presidio found on the side of the Don Jose Panaderia on Erma Avenue; he also created their hand-painted sign above the bakery’s entrance. I highly recommend grabbing some fresh tortillas and pastries among other mighty fine treats while you’re there.

When I followed up with him a few days later, I asked Ramon what inspires his work, particularly his newest project to create a print shop and studio space. This was his response:

“I grew up with limited access to art. Even Marfa seemed far away, out of reach, as it seemed like only the elite could be part of that. It is my dream to create a space where anyone who is genuinely passionate about art feels welcome. I want to be able to create a bridge between artists and people of all ages who want to at least learn, to learn from each other –– create a place that Presidio doesn’t have.”

The Blackwell School: The scholarship of Dr. Aurelio Saldaña sheds light on the school’s histor