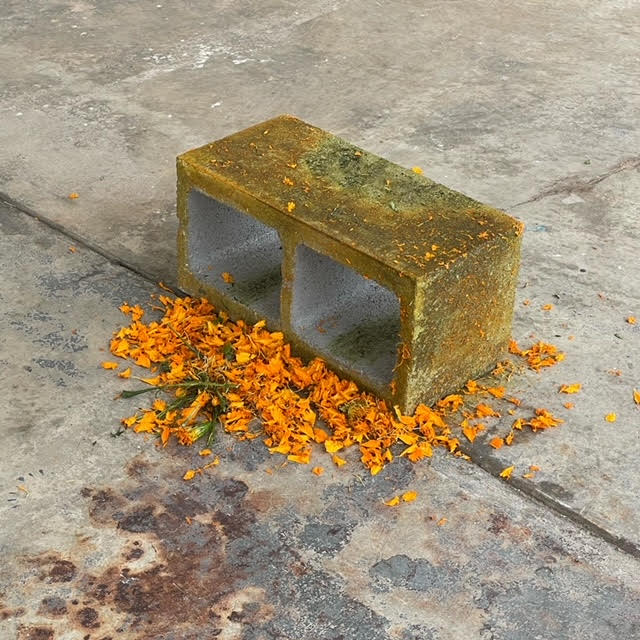 MARFA — On Friday, Chinati Weekend visitors will be invited view the work of Chinati Artist in Residence Jesus Benavente, a self-described “performance artist who does a bunch of other things” — those things, in this case, include intentionally destroyed protest signs, a submersive “sad party” accompanied by the sound of police sirens, a massive painting of the Virgin of Guadalupe, and cinder blocks stained with crushed flower petals.

It’s all part of a body of work that aims to complicate our experience of banal realities and commonly-seen objects — in this case, protest signs — with a sense of humor and an appreciation for the miraculous, while also complicating the artist’s own experience of making art.

The colorful paintings, evoking protest signs, that line the walls of the Locker Plant in downtown Marfa have been rendered onto paper-thin galvanized sheet metal and then blasted with a water hose. For Benavente, this intentional destruction of his own work was the answer to two conundrums — firstly, what he views as the inherently commercial nature of painting, more than any other medium. With the foundational knowledge of art school alone, an artist can learn how to churn out work that could attract a buyer, he said.

“So how do you undo that?” he asked. “How do you make something without that pre-made formula for success?”

Then there is the matter of protest art, which he felt fails to reflect the danger of the act. “The problem is, protest art tends to be really cute and clever and never really gets to the heart of protest,” he said.

“So I was like, how do I solve these two problems and smash them together?”

He solved both problems by spraying down his paintings, causing the colors to muddle together and the words — declarations like “You Live Here Now” — to run.

“I destroy the cute clever text, destroy the composition, and then I‘m no longer pre-determining the path for success,” said Benavente. “And that’s exciting to me. These turn out to be these kind of chance-based, miraculous paintings where you get a sense of the violence in protest.”

Viewers of the paintings will find at their feet a series of cinder blocks onto which flower petals have been scattered and crushed, their pulp pressing into the objects, leaving stains. The small rectangles are, in part, tongue-in-cheek evocations of the works of Donald Judd, the artist who founded the Chinati Foundation and whose legacy looms large over the town it occupies.

But the crushed petals also evoke the tale of the Virgin of Guadalupe, in which an Indigenous man named Juan Diego is visited by the Virgin Mary and tasked with proving to the Spanish archbishop of Mexico City that his visions were true. The Virgin instructs Diego to gather roses and bring them to the archbishop as proof — when the roses fall to the ground, their pigment creates the image of the Virgin.

It was a “collaborative chance painting that is used to colonize the Indigineous community,” said Benavente, and the story’s dual significance is what makes it so compelling to him. “On one level it’s this terrible colonization thing, but then flash forward a couple hundred years and it ends up being a symbol of the revolution for Mexicans,” he said. The spirit of chance is present in his water-blasted protest paintings; the crushed petals on the cinder blocks are a reference to the image of the Virgin. And in the next room of the studio, a large painting of the Virgin of Guadalupe will thematically coalesce all the exhibition’s different parts.

In a third room, visitors will have the opportunity to become performers in a piece that seeks to make explicit what Benavente sees as the implicit sadness of a party — communal activities that often mark transitions or periods of uncertainty, as with weddings, birthdays and goings away. “You’re celebrating, but you also don’t know what’s next,” said Benavente. “It’s just working your way through it.”

In the space, totems of revelry — an inflatable pool in the center of the room, flashing lights, dance music — will be accompanied by the projected image of a police car and the occasional sound of sirens. Every four or five songs, the upbeat dance music will be interrupted by something slower, forcing participants to contemplate their surroundings.

By way of explanation, Benavente pointed to the experience of being out at night in a city, seeing flashing lights in the distance and wondering if those lights signaled a party — only to realize they were the flashing lights of a police car.

“Nightlife has a way of appropriating states of emergency as a means of working through that trauma,” he said. “Party lights look a lot like police lights; it’s not unusual to hear a DJ drop sirens into music; the language of party — hands in the air, roof is on fire — it’s all borrowing from these states of emergency.” The installation takes those troubling undercurrents and brings them to the fore, and places the audience — now the performers — in the position of reacting.

“They have a choice of how they choose to act in the space: how do you act when you have to acknowledge this undercurrent within a party, this sadness?”

It is, Benavente acknowledges, “messing with people” — and that’s indicative of his approach to his artistry, which uses humor to challenge those who experience it. “I think people would say that I’m tricky,” he said.