‘The Dead Still Speak’: a Q&A with archaeologist Tom Alex 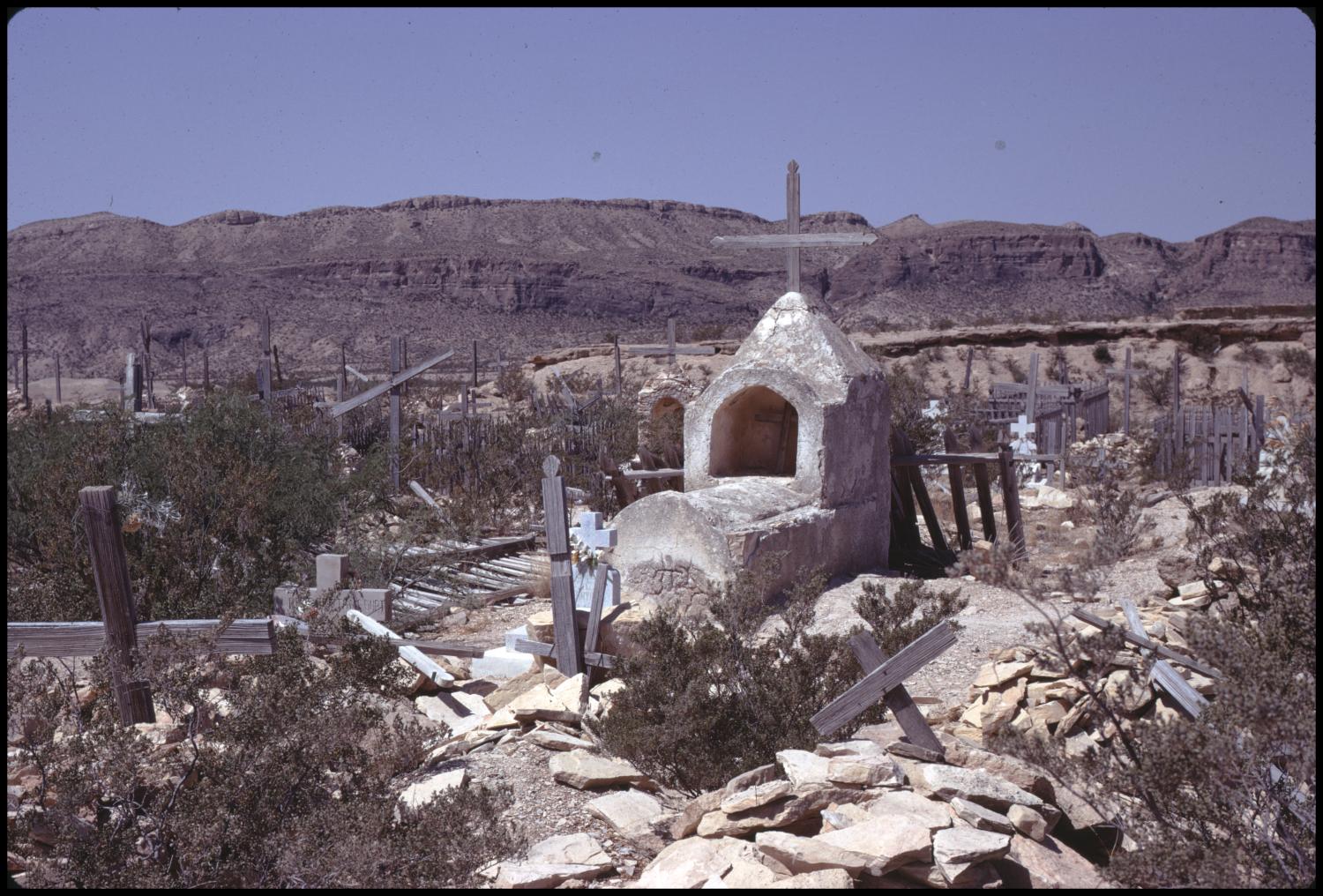 A photograph of the Terlingua Cemetery taken by Evelyn Fiedler Steng in 1971. Image courtesy of the University of North Texas Portal to Texas History.
Subscribe

TERLINGUA — At the end of September, former Big Bend National Park archaeologist Tom Alex published his latest book The Dead Still Speak: a Terlingua Cemetery Inventory. Alex — the author of several books on the Big Bend area — spent the past few years mapping and cataloging the cemetery in hopes of telling the stories of long-lost Terlinguans.

Alex’s work builds on Familias de Terlingua, an exhaustive genealogy website started by Antonio Franco and Louisa Madrid and fueled by the research of Bob Wirt, a former National Security Administration data miner who took an interest in Terlingua history. The Big Bend Sentinel sat down with Alex to talk about the popular Ghost Town tourist attraction and what it can tell us about life and death in the desert.

Why did you feel like cataloging the cemetery was important?

I’ve always been interested in the cemetery and a lot of folks have asked me, “Well, how many people are buried there?” Nobody knew, so I figured I’d go find out.

My research is really geared toward the families that were here — the Hispanic families. You read a lot of histories of the Big Bend and it’s written by Anglos and very Anglo-centric. Very few cover the Hispanic people, even though they were the backbone of everything down here.

How did you choose a title for the book?

Information about these families is in birth and death records; it’s in church records, marriage records, baptismal records. When you start pulling all that together, it shows that this person came from so and so, they worked here, they lived there. It shows how they moved around and what was going on in the community.

All that data painted a picture of what life was like for these Hispanic families just after the turn of the century — the earliest date I’ve found is about 1910. The information that got pulled together brought these families back to life. Through those records, the dead still speak.

How did you get started on this project?

Working in the national park, I recorded cemeteries all over and have tried different ways of mapping the graves. For the Terlingua Cemetery, I worked with Google Earth instead of using GPS. Whenever they took the image of the cemetery for Google Earth, the sun’s angle cast shadows for each of the graves — all of the monuments are very distinct.

Because the cemetery is so big, I had to break it up into four sections. I walked through the cemetery and drew lines on a paper map, creating a sequential inventory as I went through the cemetery. I mapped that onto the Google Earth image, so now you can download that file and click on one of the graves, and the information will pop up. It works really well.

Outside the cemetery, there’s a Texas Historical Marker for Federico Villalba, the first Mexican American in the county to file a mining claim. Who else is buried in the cemetery that you think deserves a special marker?

One is Felix Valenzuela, who was born in Julimes, Chihuahua, in 1882. He was a constable down here and he worked in the mine — he was one of the managers over there. He was working with the deputy one night — this was during the Prohibition era — and there were some local boys down here hauling bootleg liquor. The deputy stopped these guys. He was wearing his gun in his belt, and one of the kids took the gun and shot and killed Felix. There’s a monument here in the Ghost Town, but it’s been broken up. I’ve thought about replicating it and replacing it.

I was reading on the website about how Brewster County doesn’t have any records of deaths from Spanish Flu during the pandemic of 1918, and it’s not clear if that’s by omission. What are some of the ways people would have commonly died back then?

In the older part of the cemetery, there are several multiple graves — you basically have a big platform with individual monuments in it. I think some of those who died all at the same time may relate to Spanish Flu, but because there’s no data associated with it, I don’t know.

There’s also no recorded deaths related to mercury poisoning [Terlingua was the site of a number of cinnabar mines, which is refined into mercury]. I don’t know whether it happened or not — it just wasn’t recorded.

There are a couple related to general mine safety. There were some mining accidents — from falling down a mineshaft or having a shaft collapse. There was one related to a dynamite explosion.

Has heavy tourism in the Ghost Town had an impact on the cemetery?

One of the biggest problems facing the cemetery is that it’s been loved to death ever since the mining town was abandoned in the ‘40s. There’s a lot of visitation, whether from the Chili Cookoffs or Día de los Muertos or general tourism. There’s a lot of crosses and pieces of monuments that have been stolen by tourists over the years.

I think the problem is a lack of respect. Some relic hunters will target old ghost towns just like this one, and they’ll rip this stuff out and use it for yard art at their house or hit the flea market. That’s one of the big problems over here — how much knowledge and information has been lost?

What have you learned through the process of indexing the cemetery?

One of the things that’s really struck me is that we need to take advantage of being able to engage with the elders while those elders are still with us. There’s lots of people buried here and nobody knows why.

We need to be spending the time with these elders, and if they’re capable of traveling, bringing them down here. Once you get people walking around and talking about the location where they used to live, the lights come on. The memory comes back, and the stories start flowing.

This interview has been edited for length and clarity. Alex’s other books, Around Terlingua and Big Bend National Park and Vicinity are available online and at bookshops throughout Brewster County. The Dead Still Speak can be purchased by contacting [email protected]. To learn more about your own family history or to contribute photos and information, visit familiasdeterlingua.com.