Santa Teresa de Jesús festival to be held this weekend 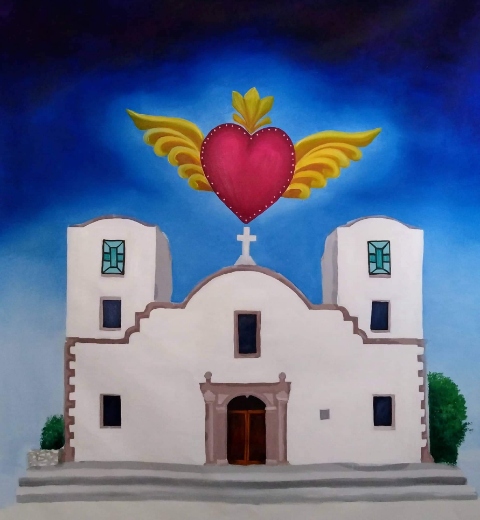 A work in progress by Laurie Holman, depicting the iconic Santa Teresa Church in Presidio. Holman plans to raffle off the painting when it’s complete.
Subscribe

PRESIDIO — This weekend, Santa Teresa de Jesús will be hosting its annual festival in honor of its namesake, Teresa de Ávila, whose feast day falls on Saturday. The fun and festivities will start on Friday night at 6 p.m. and will carry on through late Saturday night, with plenty of performances and food vendors to keep the good times rolling.

Father Mike Alcuino explained that the annual bash is meant to be a celebration of community — but it’s also a fundraiser, too. Congregations in small, lower-income communities like Presidio have been feeling the economic pinch along with the rest of the world, and the churches they attend face the risk of shuttering if they can’t financially support themselves.

That said, Alcuino hopes this weekend’s fiesta will put the “fun” in “fundraising.” He wants the event to encourage folks from within the community and all over the region to reconnect. “It’s in the spirit of community, and first and foremost it’s to honor our patron saint,” Alcuino said.

Teresa de Ávila was a 16th century Spanish nun known as a “doctor of the church,” a special distinction given to canonized saints who claim special contributions to theology through their studies and writing. Presidians honor this saint every year by carrying out a novena, or a nine-day series of prayers. “It’s a form of sacrifice, which is really important in our Catholic religion,” Alcuino explained.

This year, Presidio’s novena celebration for Teresa de Ávila consists of a daily procession from Fort Davis State Bank to the church, with an escort from the Presidio Police Department. The matachines — traditional dancers that blend Indigenous and Spanish traditions — lead the way. “It’s said they cleanse the way of evil,” Alcuino explained. “Our matachines also clear the way for traffic.”

This weekend, the top young fundraisers of the congregation will have an opportunity to be crowned Little Miss and Miss Santa Teresa. There will be a presentation of the candidates and a fashion show on Friday night, and coronation of the winners on Saturday at 9 p.m. Throughout the competition, food vendors will be serving up local delicacies and raffle tickets will be sold, all to benefit the church.

There will be plenty more to enjoy at the festival: parishioners and their neighbors are invited to a parade on O’Reilly Street Saturday at 10 a.m., followed by lotería in Benito Hall at 2 p.m. On Friday night, musical entertainment will be up to the crowd — karaoke will be held until midnight. The following evening, Carlos Rodriguez and Roxy Cabello will provide the soundtrack from 6 p.m. until after midnight.