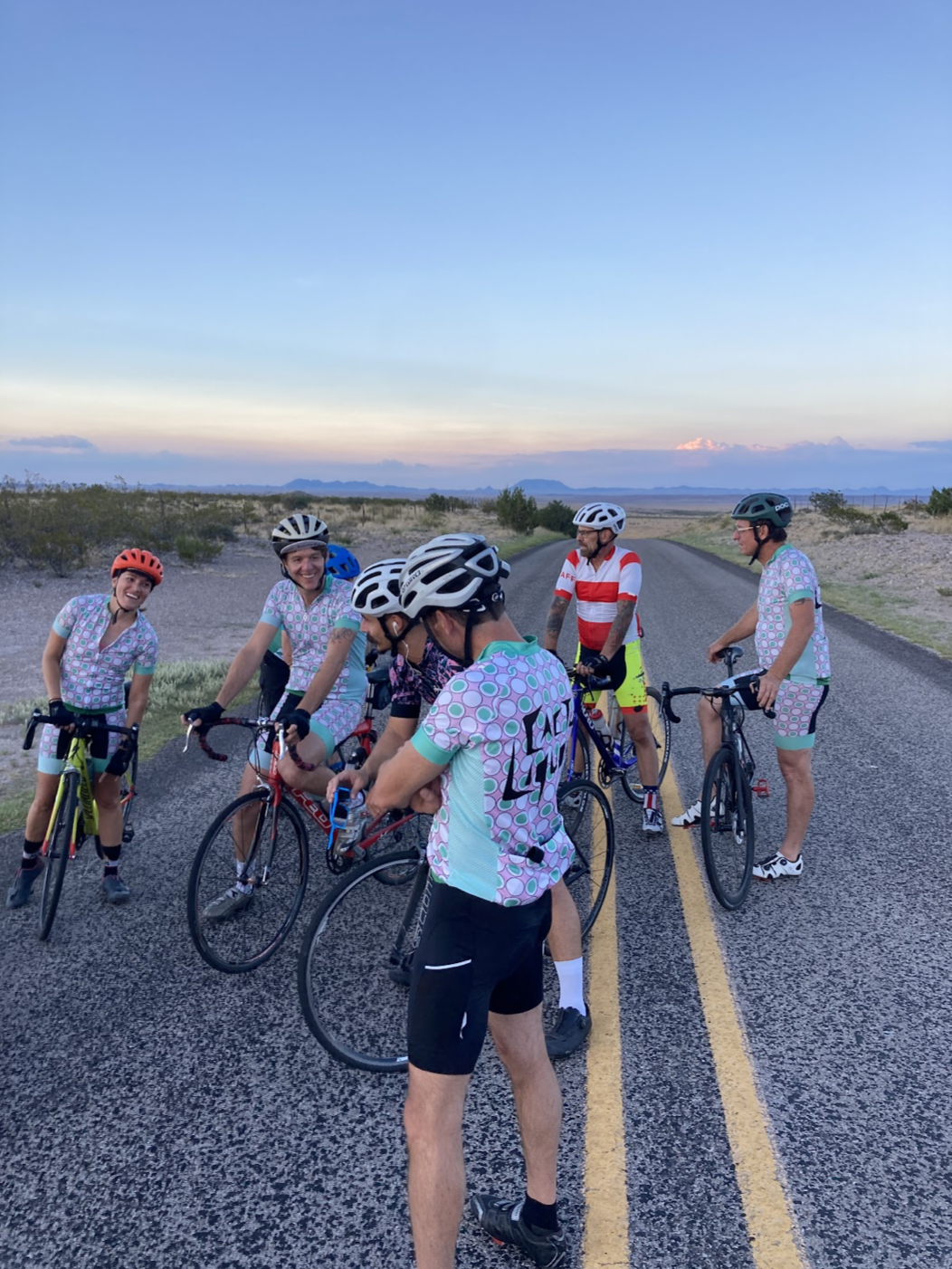 Ranch Road 2810. It’s home to the Marfa 100 Bike Race on October 15. It’s been called the Road to Nowhere, and for good reason. It’s a long, straight, empty, zen-like stretch of two-lane pavement that heads southwest from Marfa, cutting through desolate rolling hills of high desert grassland for some 31 miles. That’s where the pavement ends and the rocky and winding Pinto Canyon Road begins with a dramatic descent down to a rugged canyon floor that carves its way through the foothills of the untamed Chinati Mountains.

Upon setting out from Marfa, you’ll quickly realize there’s not much out there, save the occasional ranch house in the distance set upon a vast tract of land.

If Ranch Road 2810 feels like scenes from No Country For Old Men or There Will Be Blood, that’s because both of these Oscar-winning Western movies include scenes shot just off this road around the same time in 2008. It’s been storied that Daniel Day-Lewis, lead actor in There Will Be Blood, was really into cycling along 2810 during that unique time in Marfa. Supposedly, he stubbornly rode straight through a scene being shot for No Country For Old Men. Perhaps there was some rivalry or a bit of character-driven ego playing out there. Or perhaps, like many other cyclists I know, Daniel Day-Lewis just really loved cycling this otherwise peaceful road unabated.

This paved 31-mile stretch sees a very light amount of traffic and is a favorite among the local cycling community, also enjoyed by runners and walkers. I know several cyclists who ride this road over and over again, and it never seems to get old. The emptiness of the road and its endless landscapes allows for a moving meditation on two wheels, with some exciting sections peppered in, keeping riders on their pedals.

For these reasons and more, this stretch is host to the upcoming Marfa 100, a 100-kilometer (62-mile) out-and-back road bike race on Saturday, October 15, which will bring in a growing number of cyclists for what promises to be a great ride and a fun after party. Going strong for more than a dozen years, The Marfa 100 is now a Marfa institution. After being organized by Joey Benton for a decade, the reins were handed over to Zeke Raney and Elizabeth Farrell three years ago, and they’re keeping the party going.

A casual cyclist myself, I’ve ridden along 2810 several times, including a handful of out-and-back 62-mile rides, the most recent of which was a truly magical Far West Texas experience in mid-August.

It was the annual Full Moon Sushi Ride which follows the same route as the Marfa 100 and is organized by the same good people. Having missed out on these rides too many times, I finally got to go on my first full moon sushi ride and it was probably the best $35 I’ve ever spent in Marfa. Sushi in the middle of nowhere on a moonlit night with a fun collection of cyclists after 31 miles is a surreal experience.

Beginning in town near the start of 2810, some 40 of us headed southwest on a cool mid-August evening out to where the pavement ends. While the route does have its long, relatively flat stretches and gradual ascents, it’s punctuated with a handful of memorable climbs, a few of them quite steep, and the route includes some exhilarating descents near the end as the road drops down off the Marfa Plateau.

From our respective saddles we caught the golden hour in the grasslands, we caught the sunset, continued riding into a dark and starry night, and we caught the full moon rising in the east, which would eventually be casting our shadows onto the road.

With nothing more than moonlight and a fellow cyclist’s headlight behind me, I began the steep descent down the Marfa Plateau. I topped out at almost 50 miles per hour while crouched in an aerodynamic posture, eagerly flying downhill to the feast. In the faint light I found myself praying to the grassland gods that I wouldn’t find a family of javelinas crossing the road at the wrong time.

As we coasted in, there on the grassy shoulder under the light of a full moon awaited a long table with a lovely spread. Upon my first bite of sushi and sip of wine, this pop-up paradise proved not to be a mirage in the high desert, but a very real, very fun, very unique experience. Only in Far West Texas.

After dinner some of the stronger riders then cycled the 31 miles back to Marfa, while others opted for shuttle rides back into town. Having only ridden my bike any considerable distance twice in the previous two years, I lingered at the dinner table in deliberation, but finally decided that the ride out was so much fun, I had to soak up some more moonlight and ride back.

Once the support vehicles had packed up and passed me by, I had the road back into Marfa all to myself for some 20 or so miles. After a grinding and seemingly endless three-mile climb back up onto the Marfa Plateau with at least a few “false summits,” I finally crested the last big climb and it was mostly downhill from there.

I didn’t get back into town until after 1 a.m. Finishing dead last, I was happily exhausted and a bit delirious, and my unaccustomed seat had never been more sore from the saddle.

But that moonlight ride was like no other ride I’d done. Gliding through the gilded grasslands under a bright moon was, simply put, mystical. It was a zen-like experience. It was a reminder of why I love life out here.

This stretch may seem uninhabited, but in terms of wildlife you might find some company, particularly around sunrise or sunset. On my previous rides I’ve seen pronghorn (the fastest land mammal in North America), elk, mule deer, javelina, an assortment of owls and other raptors (including the cutest couple of burrowing owls standing proudly outside their burrows one early morning) and other smaller critters and grassland birds. In warmer months rattlesnakes are not uncommon along 2810 and cyclists have been known to swerve to miss them. And this time of year male tarantulas can be seen on the move. A former state park colleague even saw a juvenile mountain lion crossing the road while on a drive a few years back.

My most memorable wildlife encounter cycling 2810 occurred as I was headed west into the sunset. I startled a nearby cow elk in the pasture which started running ahead of me. That elk then startled a mule deer doe, and both of them began bounding beautifully through the tall grasses, all three of us headed west.

To cycle Ranch Road 2810 is to feel the expansiveness of the Big Bend region. It’s an experience where riders become mere specs rolling through a vast grassland wilderness of a humbling scale. And this year, after a great monsoon season, the grasses are at their greenest and tallest in a long time. Areas once bare from being overgrazed are now bouncing back beautifully.

If you’re lucky, at the end of the pavement on a Saturday in mid-October, you might find an aid station at the Marfa 100 turnaround point staffed with friendly local volunteers offering refreshments and snacks. Or if you’re lucky next summer, you’ll find a long table lined with sushi and good friends under a full moon.

If your timing is right, it’s no mirage. It’s a very real, very fun, very unique experience. Only in Far West Texas.

Tyler Priest is a local outdoor adventurer and bartender who enjoys running, hiking and biking his way across the Big Bend region.

Marfa100
Stay in touch with The Sentinel
Related