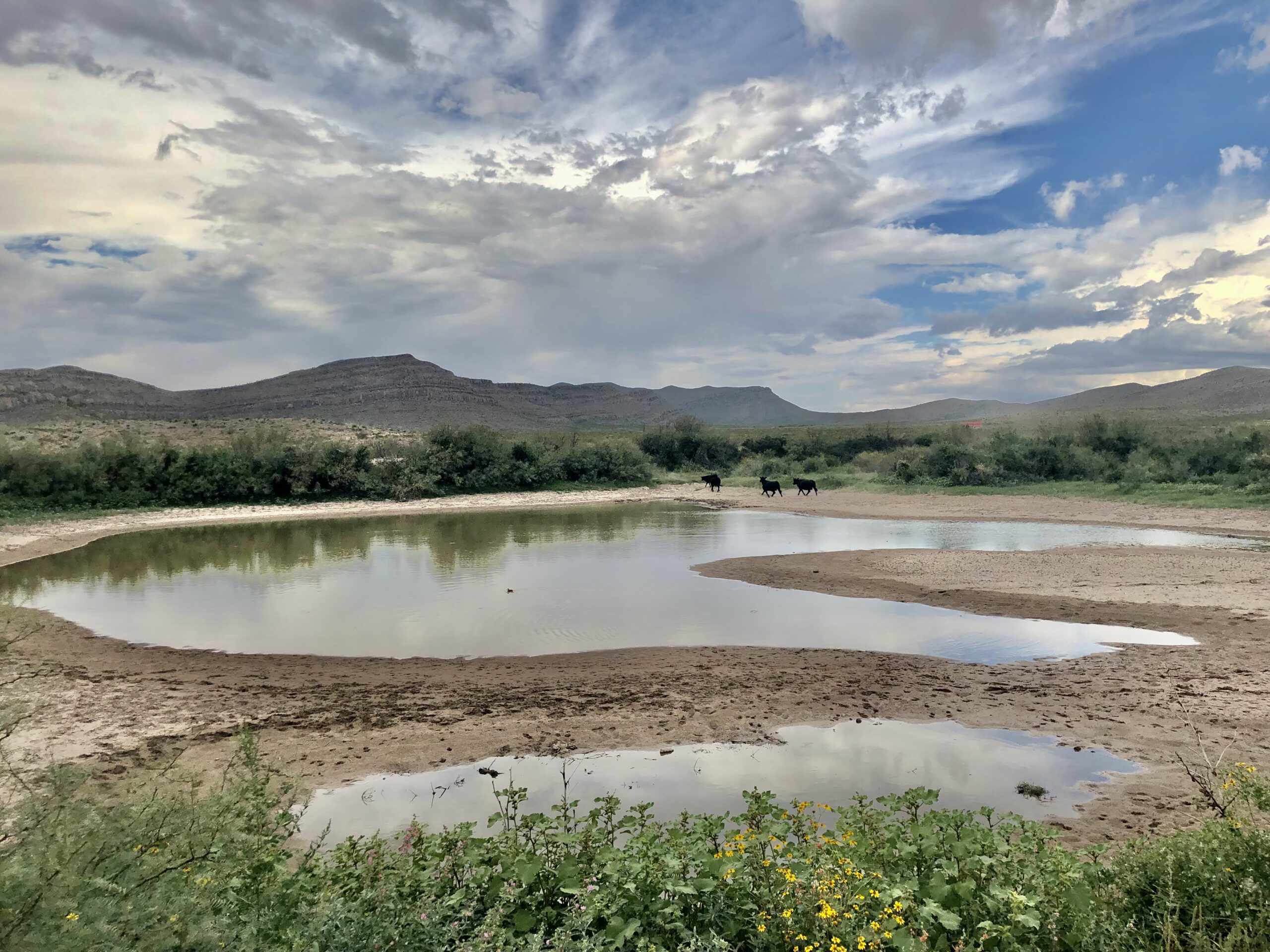 The reservoir south of Sierra Blanca where the shooting took place. Photo by Debbie Nathan.
Subscribe

TRI-COUNTY — Twin brothers Mark and Mike Sheppard, both facing criminal charges in the Hudspeth County shooting that left one migrant dead and another injured, are currently being detained in Marfa and Alpine.

The brothers are facing manslaughter and assault with a deadly weapon charges in connection with the September 27 shooting, in which authorities say the men shot at a group of migrants who were drinking water from a reservoir around four miles south of Sierra Blanca. According to arrest affidavits, Mark Sheppard told investigators that his brother Mike had fired two shots near the reservoir that evening, believing he was shooting at javelinas.

Both men were initially apprehended by the El Paso County Sheriff’s Office and charged with manslaughter on September 29, and were held in the El Paso County Jail for several days. They were then transferred to Hudspeth County before being released on $250,000 bonds, and subsequently turned themselves in when the additional charges were brought against them.

“It was the sheriff’s idea,” said Dodson. “He didn’t want to be a part of the investigation, because he knew him, and that’s always tough on us.”

Sheriff West did not immediately return a request for comment.

According to the affidavits, migrants in the group told investigators that two men pulled over along Farm Road 1111 around 7 p.m. on the evening of September 27 and that the driver fired two shots, striking and killing a man in their group and wounding a woman, who was transferred to Del Sol Hospital in El Paso. Migrants said that one of the men had shouted in Spanish something to the effect of, “Come out you sons of b—-, little asses!” before revving the car’s engine.

Authorities traced the vehicle to Mike Sheppard, who declined to speak to them. But Mark Sheppard did speak to investigators — though he first said the brothers hadn’t been at the location at the time of the shooting, he then said they had been there to shoot animals — first he said birds, then ducks, then javelinas. The brothers did not go to see if they struck anything after the shots were fired, he said, and attended a water board meeting after.

Mark Sheppard’s attorney, Richard Esper, told The Big Bend Sentinel he believes that his client — who allegedly was in the car with his brother, but is not believed to have pulled the trigger — will be acquitted of the charges he currently faces.

“I can confidently say Mark Sheppard is not guilty of committing any kind of homicide or any kind of assault with a deadly weapon,” he said.

Mike Sheppard’s attorney, Brent Mayr, said that he hopes that people will resist “jump[ing] to any conclusions” as the investigation is ongoing.

As of Wednesday, the brothers had not yet been indicted.

In interviews with El Paso Matters, the families of the victims — Jesús Sepúlveda Martinez, who is deceased, and Brenda Berenice Casias Carrillo — have demanded justice for their loved ones. The case has elicited an outcry over what some believe to be a crime driven by bigotry. As activist groups have raised their voices to label the shooting a hate crime, Congresswoman Veronica Escobar has called on the Department of Justice to investigate it as such. RAICES Texas released a statement saying it had blown the whistle, years prior, on alleged abusive behavior by Mike Sheppard when he was warden at the West Texas Detention Facility.

Bill Addington, a Sierra Blanca resident, told The Big Bend Sentinel that he witnessed Mark Sheppard yell at people for speaking Spanish two weeks prior to the shooting. Though one of the brothers is alleged to have yelled in Spanish just before firing and hitting the migrants, Addington said that the brothers do not speak Spanish.

“Though maybe Mike knows how to say a few mean things in Spanish since he was an ICE warden,” Addington told the Sentinel. “Or maybe he yelled in English and some migrants understood enough English to know what he was saying.”

As for the unharmed migrants who were in the group, most of the adults are being held in El Paso Processing Center, an ICE detention facility. A 13-year-old girl who was in the group is in a Homeland Security children’s facility. One adult migrant is being held at the El Paso County Jail.

According to a relative who lives in the United States, the migrant being held in the jail is a 30 year old whose middle name is Luis. The family member said Luis was fleeing fears of torture and death after being shot and hospitalized last year in Mexico, in an incident that one family member surmises was caused by drug traffickers in the area. Luis had spent years in Texas and New Mexico before being deported, trying to return, and being caught and deported again, said the family member. He has three children born in the United States. He found himself in Sierra Blanca because he was trying to travel to the U.S. to earn enough money in order to bring his family to safety in America, said the relative.

At a recent court hearing, Luis’s attorney told a judge that his client was standing next to the man who was fatally shot. After the shooting, his attorney said, he led the group to the road where Border Patrol frequently passes, and he went looking for agents to apprehend them and take them to safety. He is now charged with felony illegal reentry, a federal crime punishable by years in prison or, at the least, another deportation.

Luis’ immigration attorney, Zoe Bowman, with Las Americas Immigrant Advocacy Center in El Paso, is trying to obtain what’s called a U-visa for him and for six other survivors of the shooting. U-visas are given to undocumented victims of crime who help law enforcement to bring their perpetrators to justice. At a recent federal court hearing in El Paso, a judge deemed Luis a flight risk and denied him bond.

“It’s likely that he will be transferred to the West Texas Detention Facility, near Sierra Blanca,” Bowman told The Sentinel, referring to the facility notorious for substandard conditions and reports of racialized violence perpetrated on detainees by staff, including Mike Sheppard himself when he was warden. Sheppard’s employment was terminated just after the shootings.

Luis’ family member in the U.S. said that they have also been in touch with the woman injured in the shooting. “I talked recently with her on the phone and she said she was being released from the hospital soon. She seemed okay, except her voice sounded very depleted.”