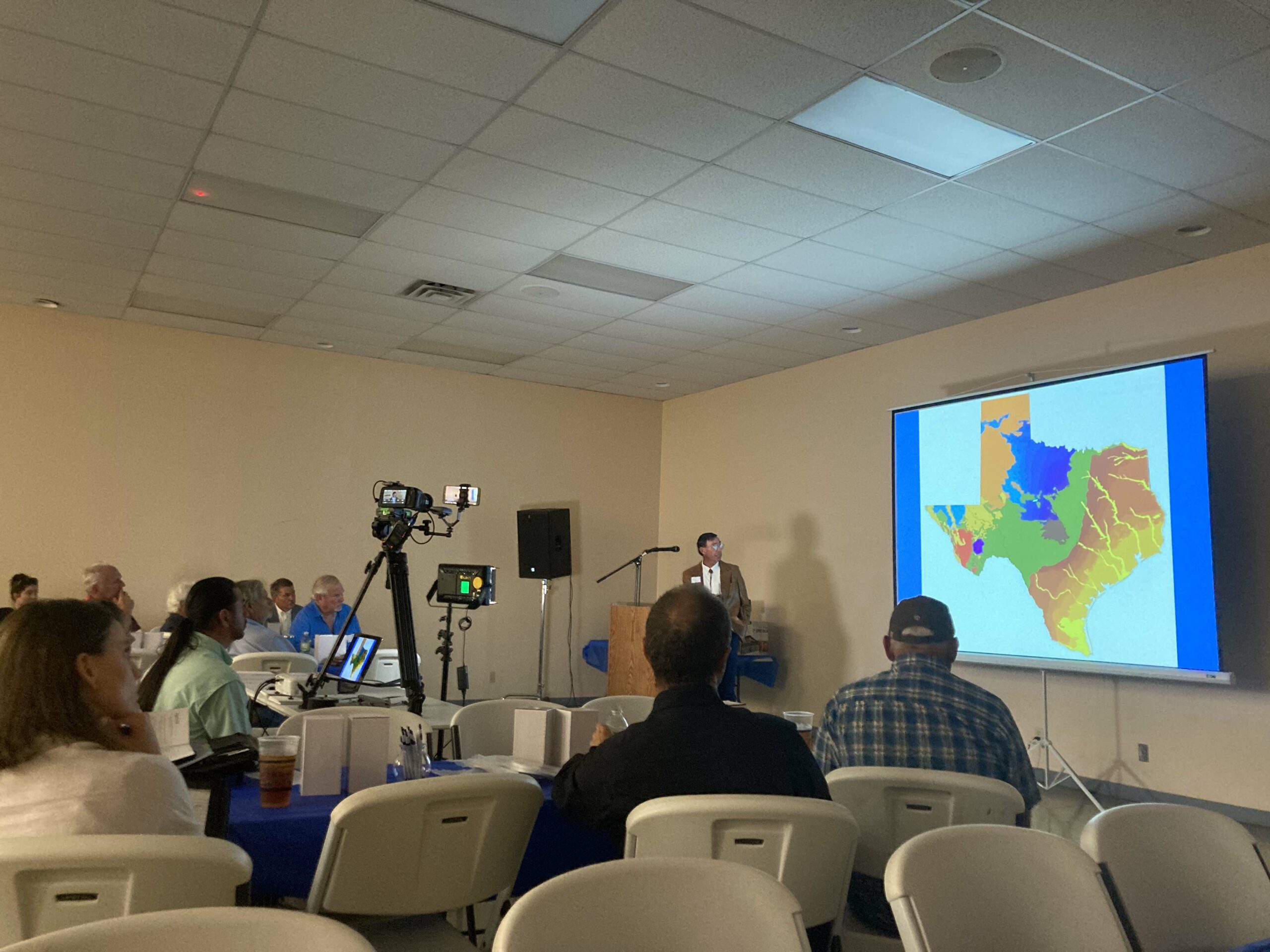 Reeves County Groundwater Conservation District held a conference in Pecos last week in which locals in the oil, agriculture and groundwater fields mingled with visitors from around the state and heard lectures on West Texas’ water resources. Staff photo by Mary Cantrell.
Subscribe

“We want to make this, at least in four to five years, the event that everyone in the Permian Basin wants to come to,” said Reeves County Groundwater Conservation District General Manager Greg Perrin.

Around 55 people attended the gathering, including presenter Sarah Stogner, previous Republican candidate for Texas Railroad Commissioner who lost to opponent Wayne Chrisitian in the primary runoff this May. Topics included the complex hydrogeology of the region, aquifer recharge, San Solomon Springs, water conservation, wastewater recycling, groundwater modeling, the Pecos River and more. Sweet tea and food were in abundance and rain gauges and tumblers were given out as conference merchandise.

“It’s just getting everybody’s viewpoint. I mean, you can’t just think of this as an agricultural area, or an oil and gas area, because we’ve got both going on,” said Winkles. “So everybody’s got to work together for the same cause.”

Reeves County’s GCD, which established its rules for governance in 2019, is working to formally register all of the water wells in their jurisdiction, and currently has about 1,600 registered compared to the over 3,000 they know to be in existence. Winkles said the more water wells they have registered, the more communication with landowners and greater possibilities for groundwater monitoring and modeling. Plus, with Reeves County’s recent boom in oil activity, the district is working to address the need for further oversight relating to local wells drilled by oil companies.

Common themes that emerged from post-presentation discussions were the need for more water level data and greater, consistent access to private land. In Presidio County, a recently-established water infrastructure steering committee is actively working to obtain government funding to increase water level and water quality monitoring — data that could then be used to build a groundwater model to help better assess the health of the county’s groundwater resources.

Conference attendee Dan Mueller, who serves as the senior manager of the Climate Resilient Water Systems department at Environmental Defense Fund (EDF), an national environmental advocacy nonprofit, said it is important that that research, like projects presented at the conference, continue and groundwater management decisions and policies occur on the local level.

“EDF is very interested in highlighting the excellent research that is occurring and stressing the need for the research to continue. This includes highlighting the need for groundwater conservation districts to have the resources and tools to translate this ongoing research into tangible sustainable groundwater management policy and actions and build on the ongoing research and knowledge gaps are narrowed,” said Mueller.

An introduction to West Texas’ complex geology and how it influences groundwater flow and updates on an ongoing study to understand the sources and interconnectivity of the area’s springs systems, including the San Solomon Springs system, were notable presentations at the conference. Mueller said the presence of springs, which are fed by groundwater, in West Texas makes the area particularly unique. The potential loss of springs as a result of excessive groundwater pumping was a popular topic at the conference as well.

“Much of the flow in Texas rivers and streams, particularly in West Texas, originates from springflow. Depending on the spring and location, springflow can, or likely will, be impacted by groundwater withdrawals,” said Mueller.

Mueller said moving forward the efforts of local GCDs and increased public awareness are key for establishing sustainable groundwater management across the state. He said the topic of groundwater — a vital, yet unseen, resource — was gaining momentum on the state level as of late.

“There is a wider realization and more discussion, both nationally and on the state level, about water sources under stress by greater demands as a result of increasing population and recurring droughts,” said Mueller.

“Sustainable groundwater management not only protects private property rights for generations to come, but also the economic benefits and ecosystems that depend on these water resources,” he added.

To watch videos from the conference, visit the Reeves County Facebook page, facebook.com/reevescountytexas