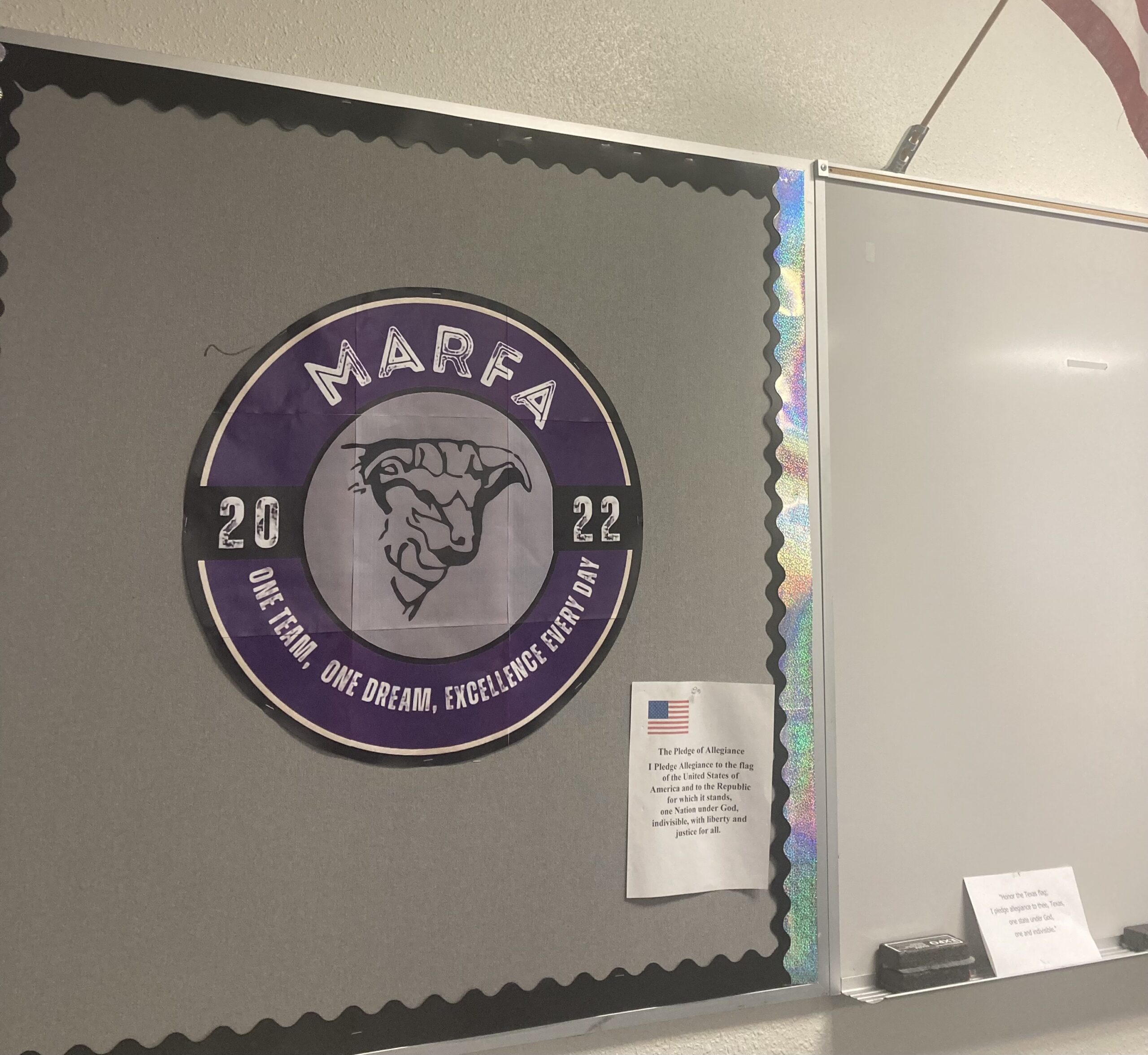 MARFA — This past week the Marfa Independent School Board met for two meetings in which they discussed the $57 million school bond proposal on the upcoming November 8 General Election ballot as well as district operations and goals.

The trustees have been meeting every week since the start of October to talk over messaging and public feedback regarding the bond proposal ahead of early voting. Mike Rhodes, education consultant with Claycomb Associates, Architects, who has been assisting the district throughout the bond process and whose company will likely be chosen to take on the construction of a new K-12 school should the initiative win popular vote, was also in attendance.

The district will continue to ramp up its campaign efforts, producing yard signs, knocking on doors and sending out letters to remind voters 65 and over that they qualify to have their school district property taxes frozen, meaning the bond would not impact their pocketbooks.

School security has also been heavily addressed in bond discussions, with the idea that one K-12 building would keep students safer than the current spread-out campus. Superintendent Oscar Aguero said he is hearing murmurs that the Legislature, which meets this year, could enact stricter security measures for districts in the wake of the mass shooting in Uvalde. Districts could be required to have exterior walls or fences, for example, meaning spending more on their current facilities.

“We’re going to be spending money that we don’t have, we’re gonna have to reallocate a lot of our M&O [Maintenance and Operations] to things like [school security],” said Aguero.

At a later regular board meeting, Aguero gave facilities updates, stating that the leaks in the Shorthorn Gym roof had been repaired and auditorium renovations were taking a little longer than anticipated due to crews having to relevel the floor, but were still on track. Flooring upgrades to other areas revealed termites in the high school secretary’s office that will need to be treated, he said.

The district is anticipating its exterior door safety audit, which will be conducted by the Texas School Safety Center, will happen this week. The district was also working on finalizing a lease agreement with Friends of the Hunter Gym, a newly established nonprofit which will work to renovate the historic adobe gym then give it back to the school.

Next, Aguero provided the board with updates regarding the Blackwell School property, which is owned by the district, becoming a National Historic Site. President Joe Biden officially signed the bill declaring Blackwell, which served as a segregated school for Hispanic students, on Monday, and Aguero was set to meet the following day with state representatives to celebrate at the site in Marfa.

However, there were some technical hurdles popping up relating to the sale of the Blackwell building and land, said Aguero. The way the district’s policies are written, in order to sell the building they would have to put it up for public bid and sell to the highest bidder, while the National Park Service requires the site be donated. Aguero said moving forward, the district will likely donate Blackwell to the NPS and a nonprofit affiliated with the NPS would donate whatever the appraised value is for the property back to the school.

“It can be done in policy that we donate it to them, and another entity donate to us. So ultimately … the safest way to go is to make sure the park gets it,” said Aguero. “I think it’s really great for Marfa ISD that we get to be part of this, because we’re one of the few that gets to tell the story.”

The board approved new goals for early childhood literacy proficiency, early childhood math proficiency and college, career and military readiness that will be measured based on the percentage of students achieving a “meets grade level” or higher on their STAAR tests and more. The district is required by HB3 to set and measure goals in public meetings. Board members worked to set new benchmarks, which they said were more attainable and realistic than goals previously set.

Under the new guidelines, the district will work to achieve meets or higher in third grade reading from 53% to 62% and math from 26% to 42% by June 2027. For college, career and military readiness, the district will assess how many students earned an industry-based certification, completed two advanced or dual credit courses, or met certain state-determined benchmarks in English, language arts and reading and mathematics on the SAT, ACT or TSIA. Their goal is to increase college, career and military readiness from 38% to 52% in 2027.

Marfa ISD MISD
Stay in touch with The Sentinel
Related