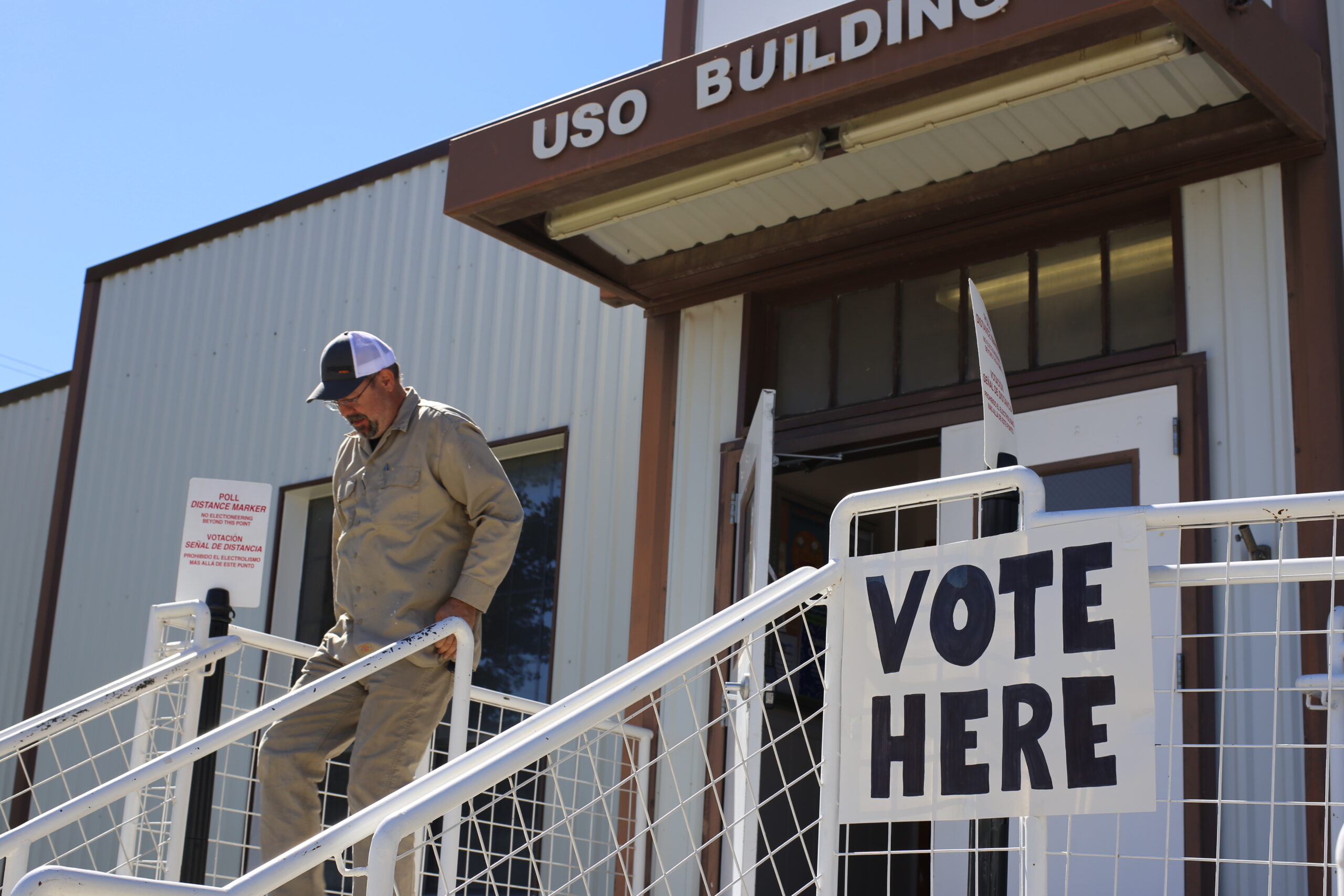 Early voting for the November 8 General Election is underway across the state of Texas. Over 300 Presidio County residents showed up to cast their ballots at polling locations on Monday and Tuesday this week. Staff photo by Mary Cantrell.
Subscribe

PRESIDIO COUNTY — A modest but steady stream of local voters visited the USO Building in Marfa this Monday, the first day of early voting for the November 8 General Election, to cast their ballots in critical statewide and local races.

The ballot this fall includes the gubernatorial race between incumbent Greg Abbott and Democratic challenger Beto O’Rourke, but Presidio County residents will also choose their next county judge, county commissioner and county treasurer.

“I do think that there’s going to be more traffic and voting just because we have local races,” said County Clerk Florcita Zubia of this election cycle. “We’re barely getting over COVID where people are comfortable going to the polling location and actually voting.”

Early voting runs now through Friday, November 4. Early voting and Election Day schedules, polling locations and an overview of local races taking place across the tri-county area can be found in this week’s edition of The Big Bend Sentinel.

In Presidio County, voters are given the opportunity to choose between paper and electronic ballots. Sample ballots for review ahead of time are also available for pick up. In Marfa, there is an additional separate voting station for the school district election — a $57 million bond proposal which would raise property taxes in order to fund a new K-12 school and other campus-wide improvements.

Marfa resident Elisa Vasquez, who wore a red, white and blue “I Voted Today” sticker, turned up to vote early on Monday because she was going out of town, she said, adding that one of the local issues she was passionate about voting on was the school bond proposal.

“I wanted to early vote as soon as it opened [to] make sure that my vote is in,” said Vasquez. “I’m concerned about our school, the betterment for our students. I wanted to come and vote for that.”

Marfa resident Mia Valentini shared similar sentiments about checking voting off her to-do list before traveling. “I just want to get it done and hopefully, if people see more people early voting, they’ll get out and do it,” said Valentini.

Valentini said she chose not to participate in the school bond election because she didn’t feel adequately informed or personally affected by the matter. “There was so much opinion going on that it sort of passed me by a little bit,” said Valentini. “I don’t have children in school, I’m out of school, so the effects it has on me seem a little less; except for my taxes going up, I didn’t have as much of a personal attachment to it.”

She was, however, excited to cast her ballot for Presidio County Commissioner Precinct 4 candidate Democrat David Beebe and Texas Comptroller candidate Democrat Janet Dudding. Valentini said attending recent candidate meet and greets in the area helped bolster her understanding of the roles and influence of local government.

“Meeting and hearing some of the candidates really opened my eyes actually to what more local government involves. The federal government is so sensationalized that we forget that it’s actually the local level that is far more important,” said Valentini.

Presidio County Treasurer candidate Republican David Chavez was reflecting on the democratic process and his motivations for running for the local position after casting his ballot. “I like the idea of getting out there and making change when I think change is required,” said Chavez.

Chavez said in general it is important for citizens not to be complacent with their public officials, and more people need to be willing to put themselves out there and challenge unopposed candidates. “We’re all free to vote, and we’re all free to run for office if we want to,” he said. “It’s a tragedy, and it’s also an insult to our society, when you sit back and let things happen and all you do is complain about it, but you don’t jump in and try to do something yourself.”

Marfa residents Roger and Jeanne E. Amis, too, said exercising their constitutional right was a valuable way of expressing their opinions and getting involved. “If you don’t vote, you ain’t got no right to bitch,” said Roger. “That’s my take on it.”

The couple said one of their primary concerns on the state and federal level is the increasing numbers of migrants crossing the border illegally into the U.S., while one of the key local issues that brought them to the polls was the school bond, they said, which seemed like “a big chunk of money” to spend on a new K-12 school considering the district is still paying off two existing bonds and is experiencing decreasing enrollment.

“We don’t have the tax base for it,” said Jeanne. “We can’t afford it. They got to fix up and make do. And besides that, it’s not the campus that makes the students, it’s the teachers.”

County Clerk Zubia said so far election operations were running smoothly and she was curious to see what the voter turnout would be like on Saturday, October 29, an additional date the Presidio Democratic Party petitioned to add to the voting calendar this election.

Zubia said in Presidio County there has been a decline in voters who choose to vote by mail, down to around 100 individuals from 200 in the pre-pandemic era. She encouraged residents to get out early to vote in case they encounter any complications. Since she first started working elections in 2007, she said, Election Day has always presented challenges.

“It seems that during Election Day, whatever scenario can happen will happen,” said Zubia. “Sometimes it just takes longer to try to figure out how the person can vote, or if they can vote in this county or if they need to vote provisional.”

early voting
Stay in touch with The Sentinel
Related