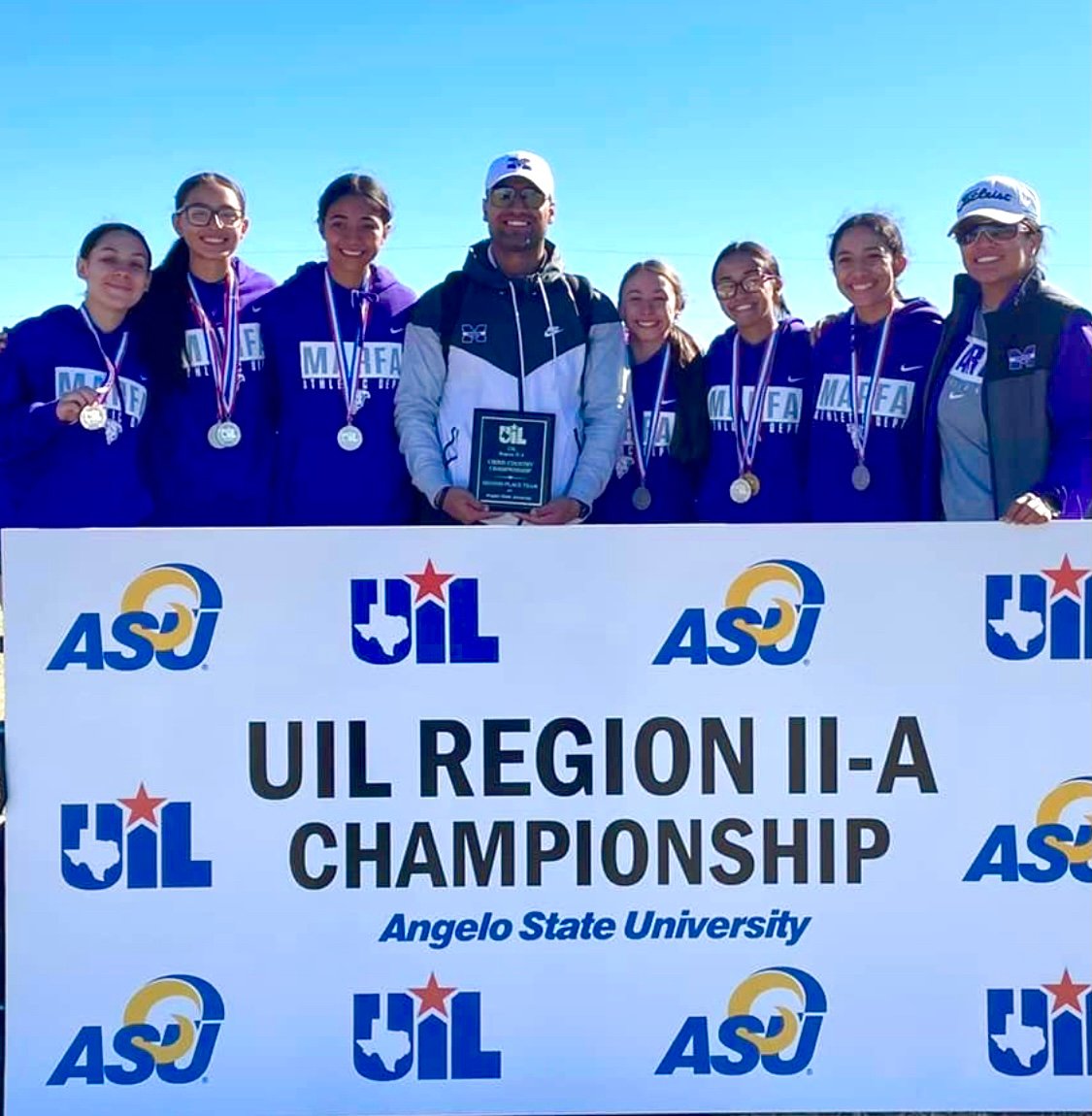 History has been made! Marfa’s Lady Shorthorns have qualified as a team for the UIL State Cross-Country Meet Championships in Round Rock, Texas. The team, led by veterans Ummi Chanez (2nd place at Regionals) and Aundrea Garcia (3rd place at Regionals), was runner-up at the Regional Meet in San Angelo, Texas, Tuesday morning. The Horns had a combined team total of 101 points and missed bringing home the Regional Championship trophy by 1 point and were this year’s Regional Runner-Up. Ava Flores (23rd place), Emily Hernandez (35th place), Liani Salcido (43rd place) and Lesly Torres (45th place), along Chanez and Garcia, all hit personal bests at the regional course to help Marfa have the overall best combined times among the field of competitors.

The team members are collectively excited about their overall performance, but quickly stated they have a lot of work still to do in volleyball playoffs and the state meet in the next few weeks. All athletes are dual sport standouts and are ready to continue putting Marfa on the map! One athlete shared an encounter with a spectator at Tuesday’s meet — “Someone at the Regional said, “Marfa, I’ve never heard of that place before. Is that even in Texas? Where’s that?” The girls later responded — “I bet he won’t forget the name Marfa after today.”

The runners returned home to a hero’s welcome with police sirens, plenty of signage, and lots of hugs and kisses from their family members. The UIL State Cross-Country meet will be held on Saturday, November 5, at Old Settler’s Park in Round Rock, with the start gun going off at 11:40 a.m.

Senior Nathan Pena will lead the Shorthorn stampede into battle Thursday, as the Fort Davis Indians come to Martin Field for a night filled with events. The Horns dropped their district opener at Van Horn with a 0-52 loss via mercy rule as the Eagles held the Shorthorns scoreless. The team looks to bounce back on their home field and will also have the backing of several activities as the district will host a tailgate party and senior and law enforcement recognition.

Pena, Marfa’s lone senior and four-year starter, will be honored during the night’s events, along with senior cheerleaders and cross-country members. The evening will also host several law enforcement entities throughout Presidio County to recognize and thank them for their service.

The Lady Horns find themselves in a possible tie for the district title this week and hope to best Buena Vista in order to have a seeding game to find out where they will land in the UIL State Playoffs. The team recently honored senior players as they played in their final home game.  Volleyball playoffs begin next week and additional information will be available on the Marfa Shorthorn Facebook Page and MISD website.

Little Spikers held their final games in a tournament format last week, along with their awards ceremony at the Marfa Shorthorn Gym. The team was honored by their coaches, Samantha Salgado and Trisha Salgado, and received their team shirts and awards in front of family, friends and many Little Spiker fans!

The Spikers program came into existence thanks to Marfa ISD’s Head Coach Priscila Serrano.  Serrano noted that skill development, confidence, and players’ overall health would benefit from the program.

When asked what was the most difficult part of the six-week league and what was the overall best part of the league, Serrano stated: “It was a little difficult getting a full roster for teams because of our population size, but thankfully, with the help of community members, league coaches, and the hard work of participating parents, we were able to work out practice times, games and closing ceremonies. The best part of the league was how the players developed from week one to the final tournament. On the first day of practice, coaches said players didn’t know the rules, didn’t understand the concept of the game, nor knew basic techniques. Within a month, players were able to serve the ball over net and pass the ball and even hold a rally, but most importantly they did it with fun and confidence. That’s what we want to build with this — build the future of our program’s success, while providing a supportive system for these players with their family members, teachers, and fans in the stands. Thank you to all who helped and special thanks to the teachers who went out and watched these future Shorthorns.”