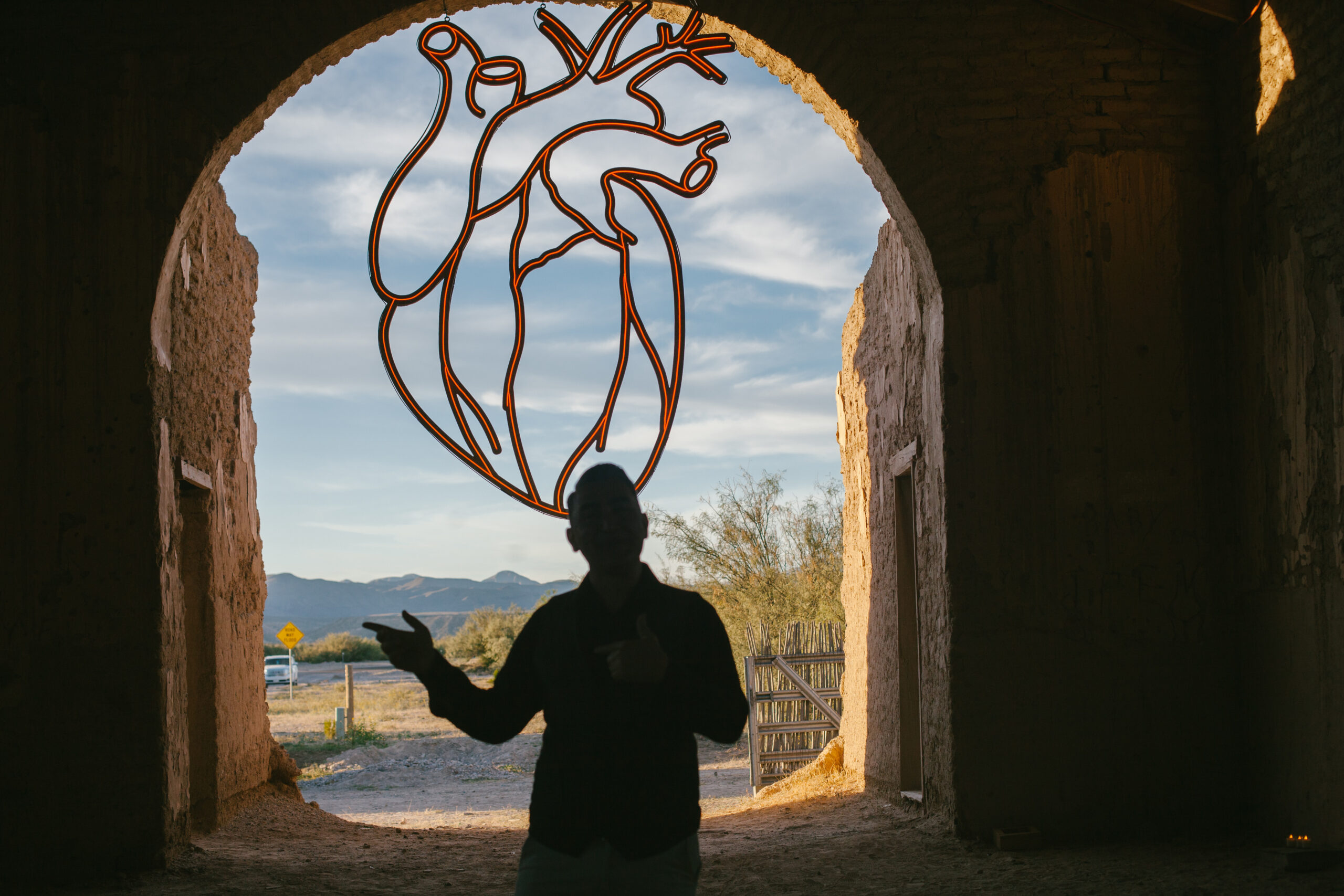 RUIDOSA — At Saturday’s second annual Ruidosa Church Community Day, Chihuahua City-based artist Miguel Valverde lit up the event with Latido de Luz, a large-scale sculpture hung from the ceiling of the historic building. Latido de Luz is a site-specific work commissioned for the event, depicting an anatomically-correct heart made of neon, steel and wood.

Folks from Ojinaga may already be intimately familiar with Valverde’s art — he was commissioned to paint the large scale murals at City Hall depicting the culture and history of the region. He is also responsible for the colorful sculptures on the highway celebrating the city’s storied musical past. “I think we all have a right to see art,” he said of his many public works. “Sharing art is part of my philosophy.”

Valverde is originally from Cuahtémoc, Chihuahua, and currently operates out of a studio in Chihuahua City. Many of his artworks cover diverse local themes from lucha libre wrestling to Mennonite culture, but his art also has a global reach — he has also been commissioned to make and show art across Europe and the southwestern United States.

Latido de Luz is Valverde’s first work on this side of the Big Bend. The name translates to “pulse of light,” though he insists that translation doesn’t capture the full meaning. “Pulse of light could refer to the pulse of the heart,” he explained. “It goes back to the origin of the human body. It’s trying to reconnect with that, to find a new beginning.”

Inspiration for the work struck him back in July, when he made his first visit to the site. The church in Ruidosa is a distinctive adobe structure dating back to the early 20th century — the site was mostly abandoned by the 1950s. As pieces of the church were scrapped for parts, it was left to melt in the distinctive way that adobe degrades when not regularly maintained.

In 2019 — after decades of attempted negotiations with the Diocese of El Paso — the property was deeded to Presidio County, which then transferred ownership to the Friends of the Ruidosa Church, a nonprofit dedicated to restabilizing and restoring the iconic structure. Apart from the building’s cultural significance, its architecture features what many believe to be the largest adobe arches in Texas.

The church’s original name was El Corazón Sagrado de la Iglesia de Jesus — literally meaning The Sacred Heart of the Church of Jesus. Valverde found part of his inspiration in the name itself. The rest came from the greater story of the site — a sacred place, the heart of a community — and its eventual rebirth. “Sometimes art just appears,” he said. “It’s really organic, and this was one of the more organic ideas I had.”

Transporting the delicate sculpture was a work of creativity on its own. Board members David Keller, Jessica Lutz and Clara Bensen traveled to Chihuahua City to tour Valverde’s studio and help pack everything up for the journey to the U.S. The team constructed a wooden rack on top of a truck to allow the piece to lie flat, then shrouded it to protect it from the elements.

Before its bumpy ride along the River Road north of Presidio, the piece had to go through customs. The team gave authorities on both sides of the bridge a heads up before attempting to cross. “It was actually super easy,” Valverde said. The only difficult part was convincing customs agents conducting the search not to tap or knock on the artwork — once the significance of the piece was explained, they were happy to comply.

In advance of Saturday’s event, the team hung the sculpture from an arch in the church using steel cables. Most of the festivities were planned for the afternoon — the early sunset helped set a dramatic stage for the lighting of the sculpture, which was the grand finale for a day of music, storytelling and fun. The bright red neon lit up the night, casting a glow from within the church for perhaps the first time in 70 years.

Valverde said that the response to the debut was overwhelmingly positive. “People said that the place came back to life,” he said. “They liked the atmosphere and the symbolic intensity of this piece of art.” 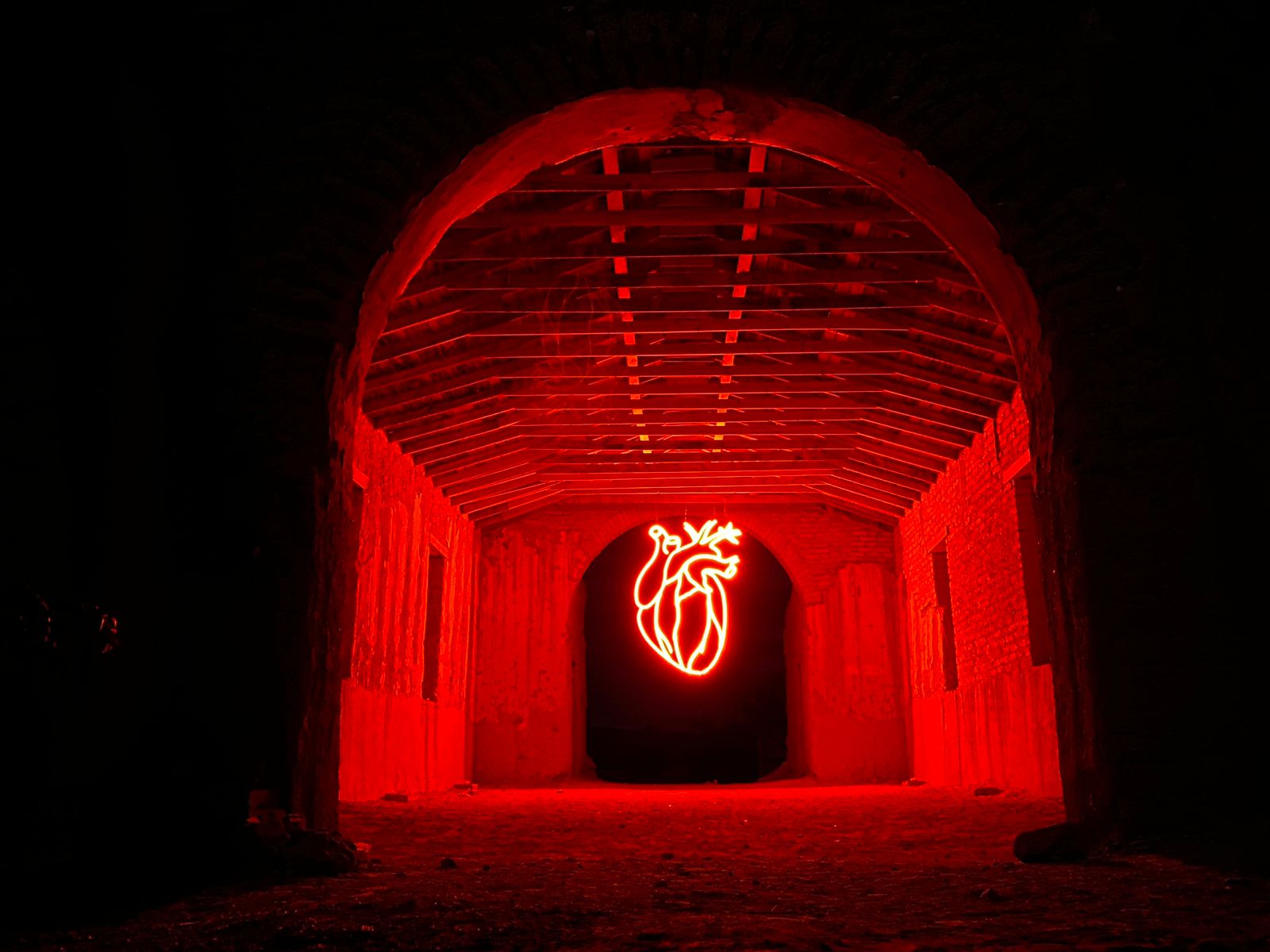 Latido de Luz at night. Image courtesy of the artist.