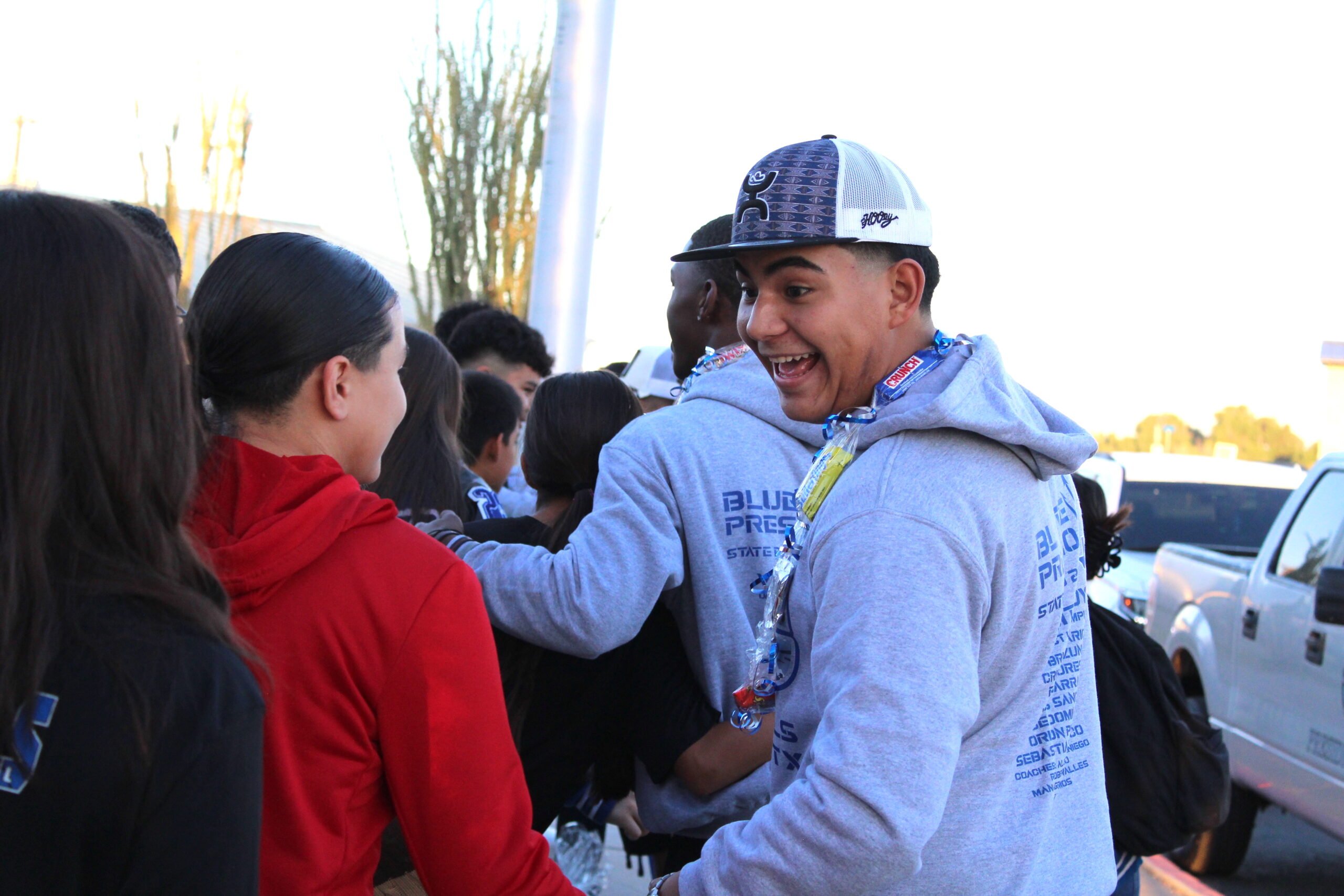 PRESIDIO — On Saturday, the Blue Devils cross-country team came home from the state championships in Round Rock celebrating a sixth-place finish. The team has had a strong year, riding a wave of success from a district championship to a second place finish at regionals and beyond.

The Presidio High School student body sent the boys off in style last Thursday with a special ceremony. The band played pep rally hits while the team received good luck gift baskets and hugged their friends and loved ones goodbye for the weekend. 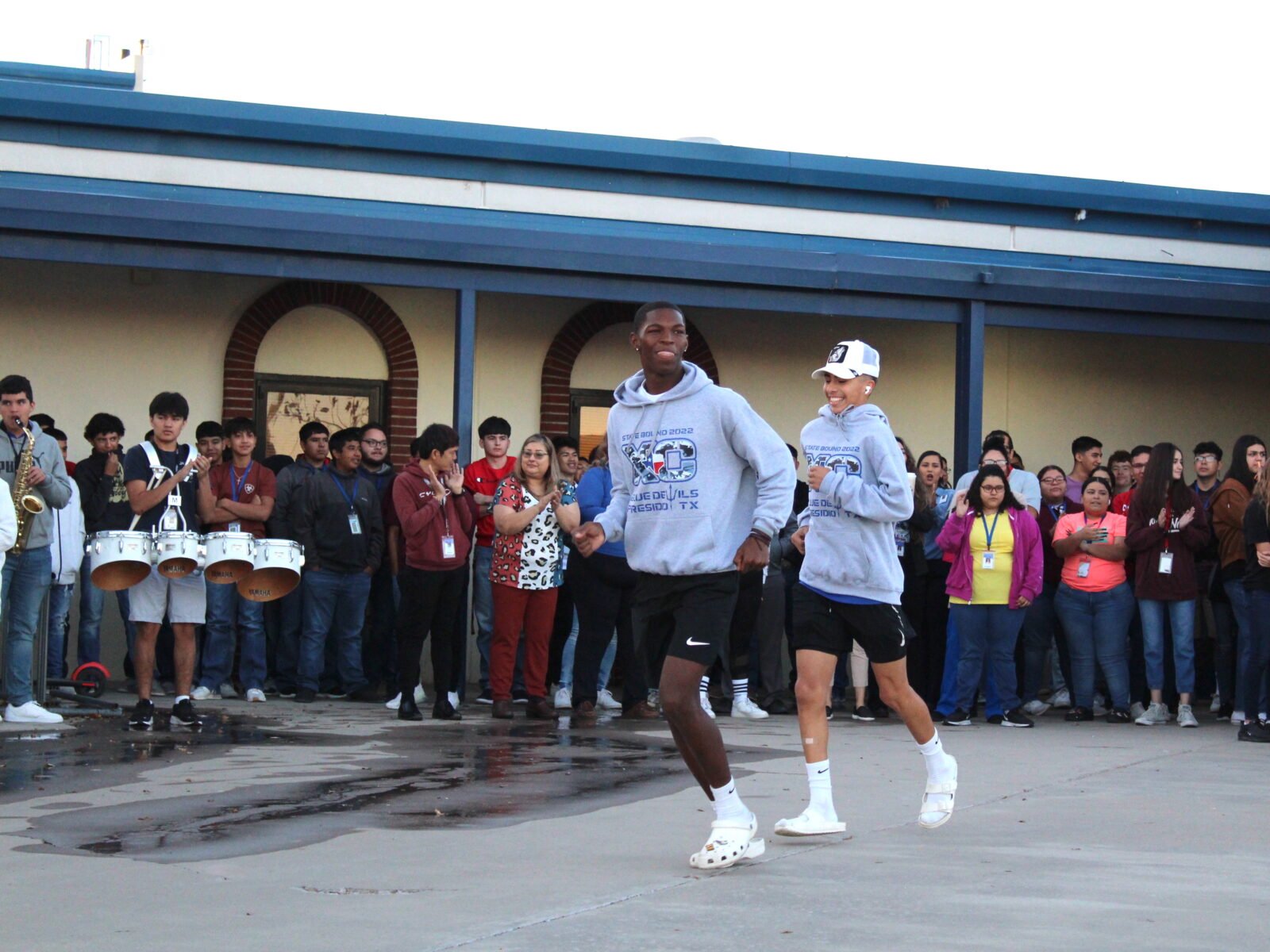 Senior Orion Pierre and sophomore Sebastian Franco get hyped up by the crowd.

Before a big race, the team typically takes an ice bath, which helps soothe sore and strained muscles. As the team cooled off the night before they left for state, a shooting star shot across the sky — the boys took it as a sign of good luck.

Heading into the state meet, everyone was feeling confident. “We’ve been putting in all this extra work,” said sophomore Sebastian Franco. “I think if we run our hearts out, the way we’ve been practicing, we could take state.”

Digital Media and Graphic Design teacher Gabriela Flores attended the state meet as a parent — her son, Eddie Flores, is a junior. The parents typically stay at the same hotel as the team and help everybody keep their focus through the pre-race rituals: a visit to the course, an ice bath, a pasta dinner.

One of Presidio’s special traditions is sitting down as a team to watch motivational videos put together by fans, friends and teachers — sometimes former athletes get in on the fun too. “It gets them pumped up,” Flores said. 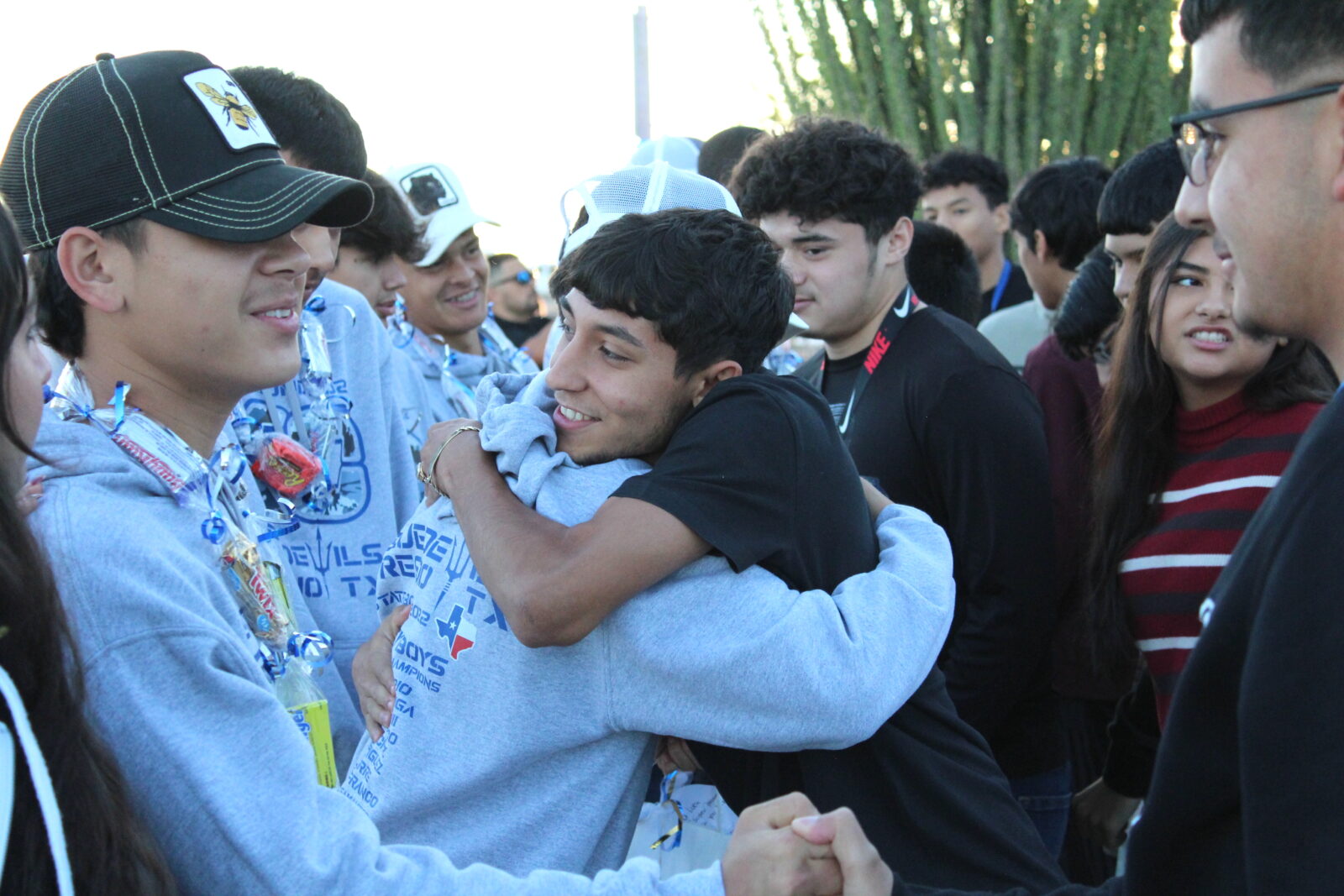 Edgar Galindo hugs his friends on the team goodbye before they take off for the state meet.

Kelvin Valenzuela, a JV runner, was in the same boat. He and his friends made numerous calls to Round Rock for more details. “We were really anxious to know if they won or not,” he said.

When the scores were eventually published, some team members were disappointed they didn’t take first place, though placing sixth out of sixteen was an improvement from last year’s seventh place finish. Cross-country results pile up quickly — the difference between ranks can be fractions of a second. “It all goes by time,” explained Deion Askew, a JV runner whose brother, Orien Pierre, competed at state as a senior.

Askew felt that it didn’t matter if the team won or lost — it was all about community. “Cross-country is more of a family than any other sport,” he said. “You run together, you put yourself through hard work.”

The results shouldn’t be cause for despair. This year’s Blue Devils team is unusually young — five of the seven boys are sophomores and have racked up valuable experience at state. “We’re keeping the core of the team intact,” Flores said. “Our boys will be bigger, faster and stronger next year.” 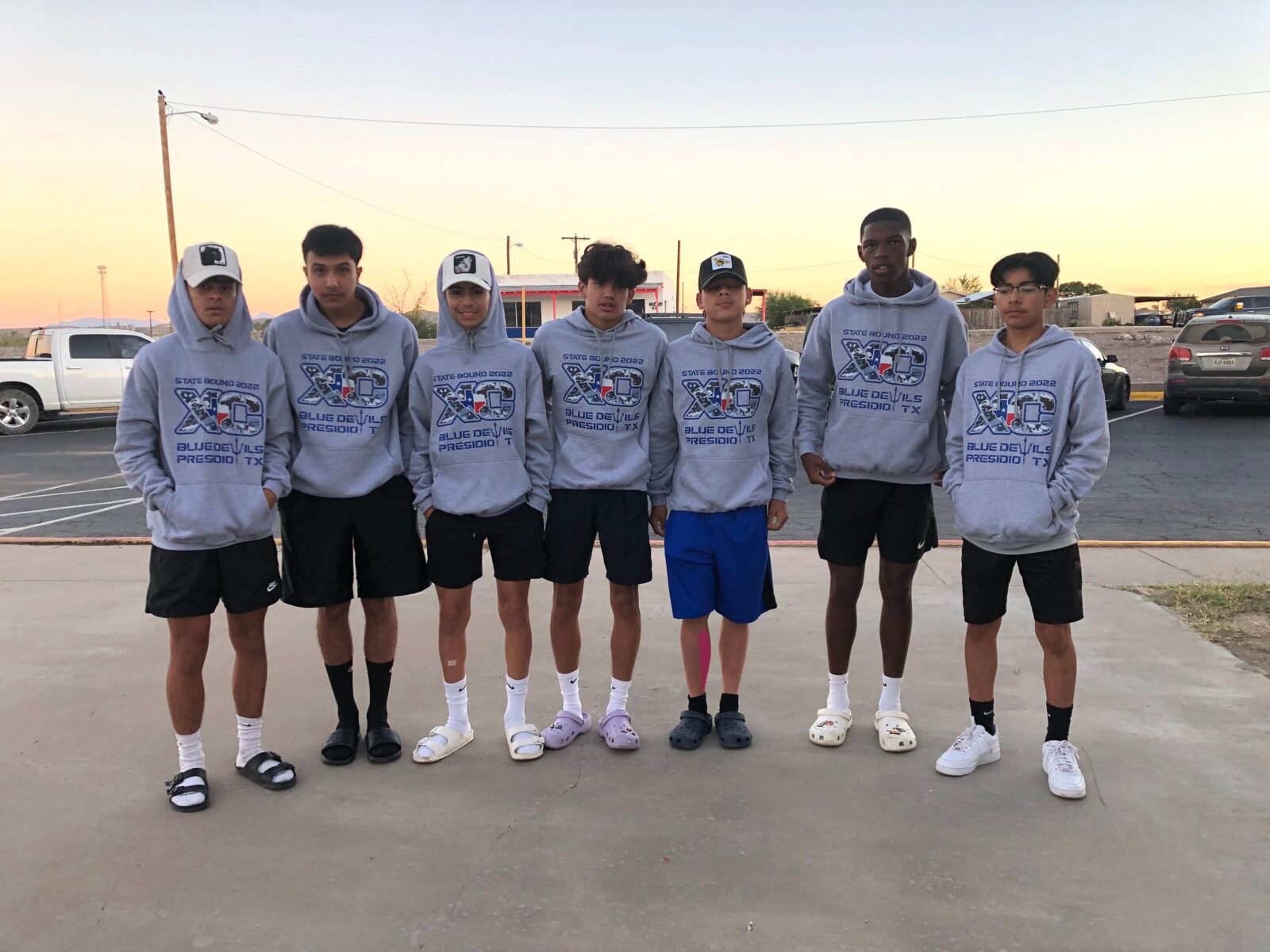 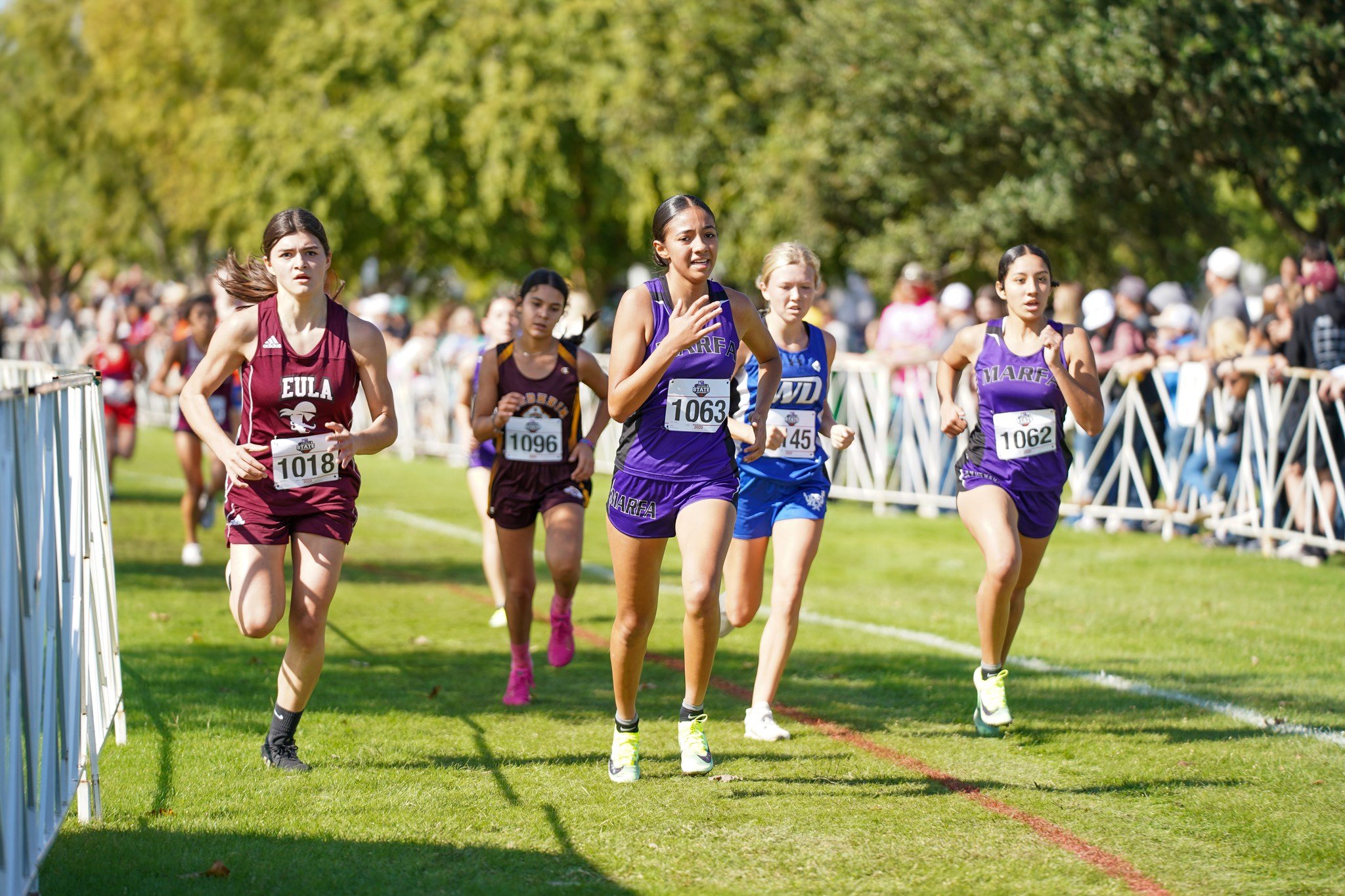 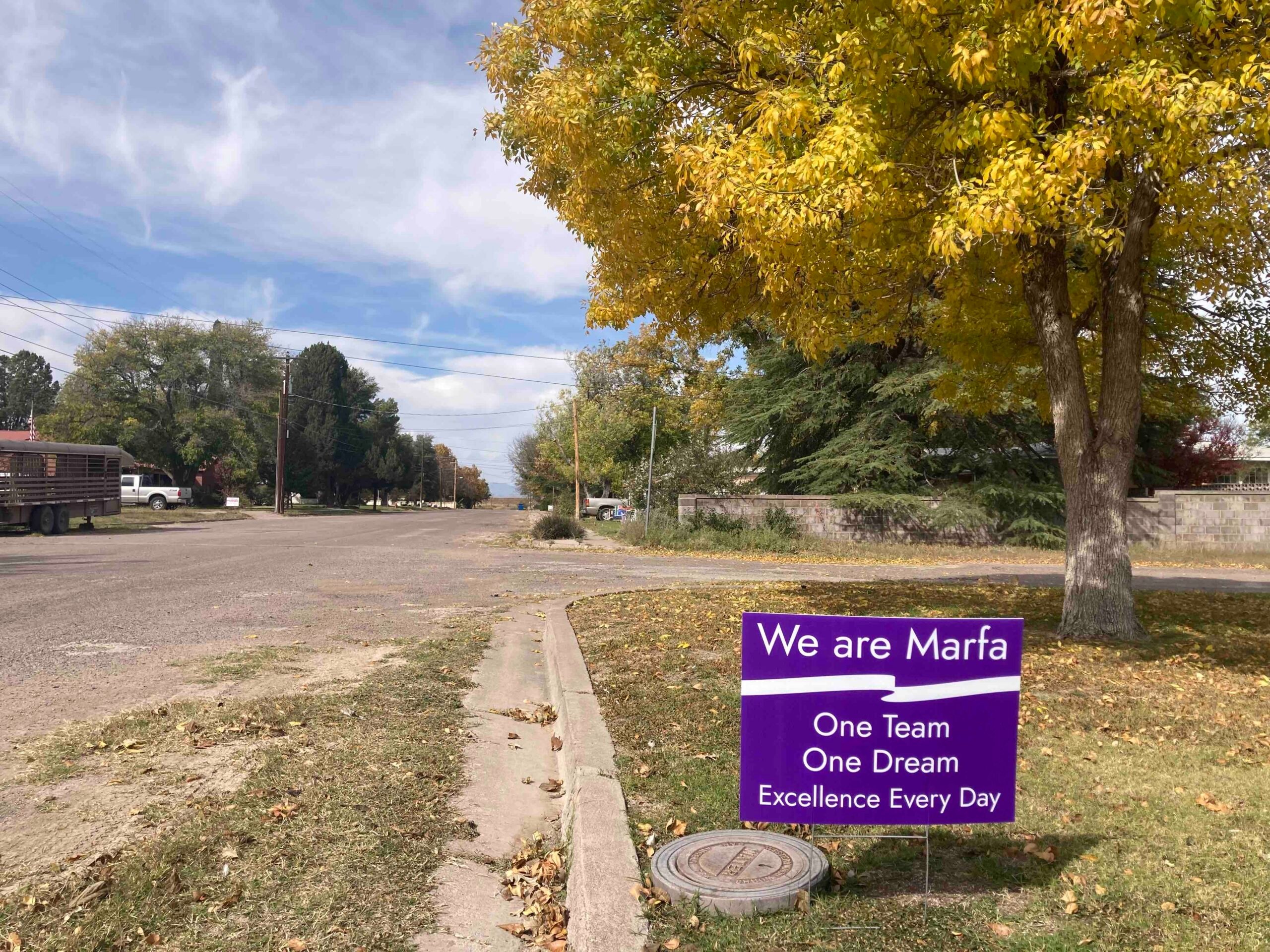 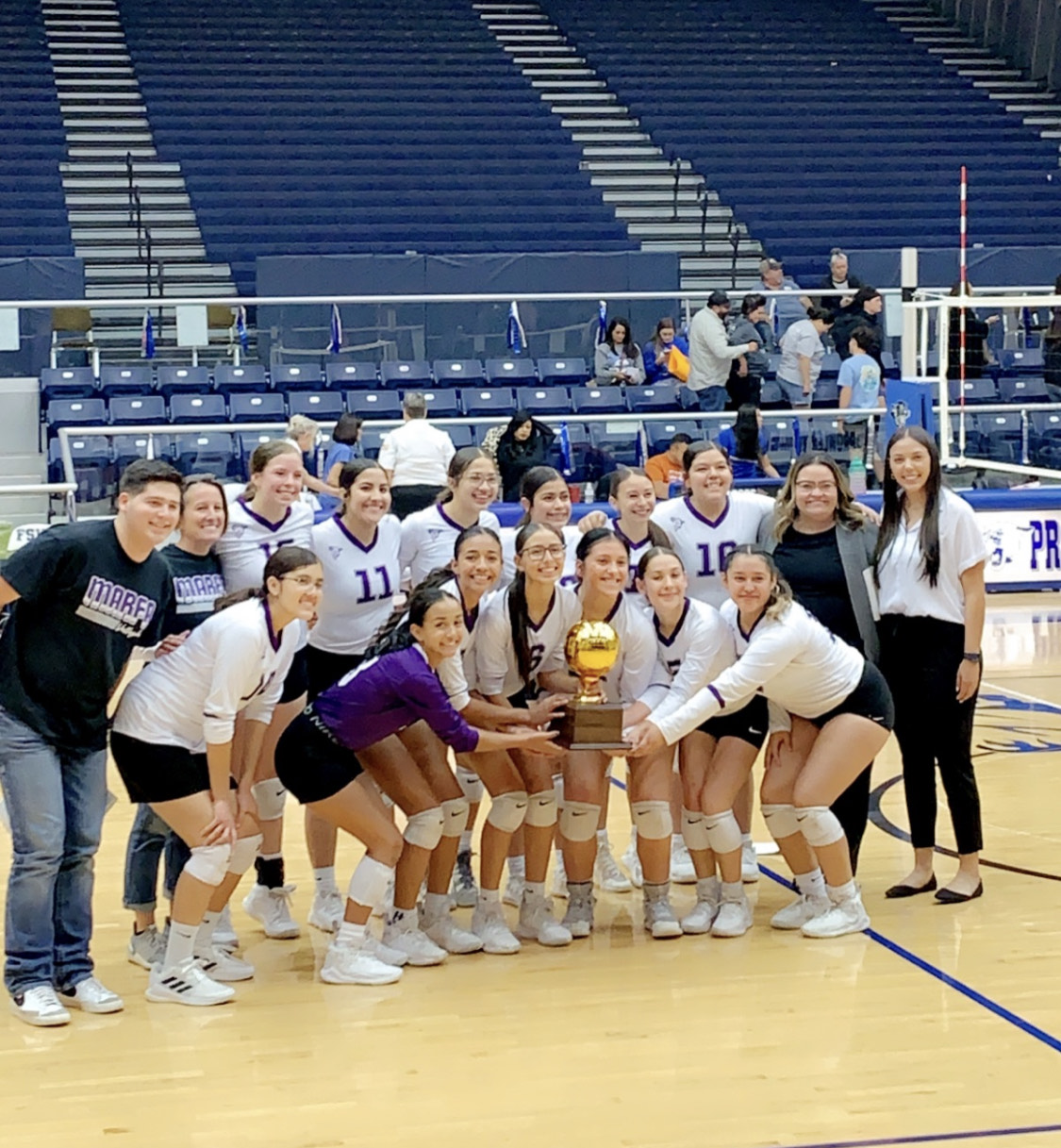