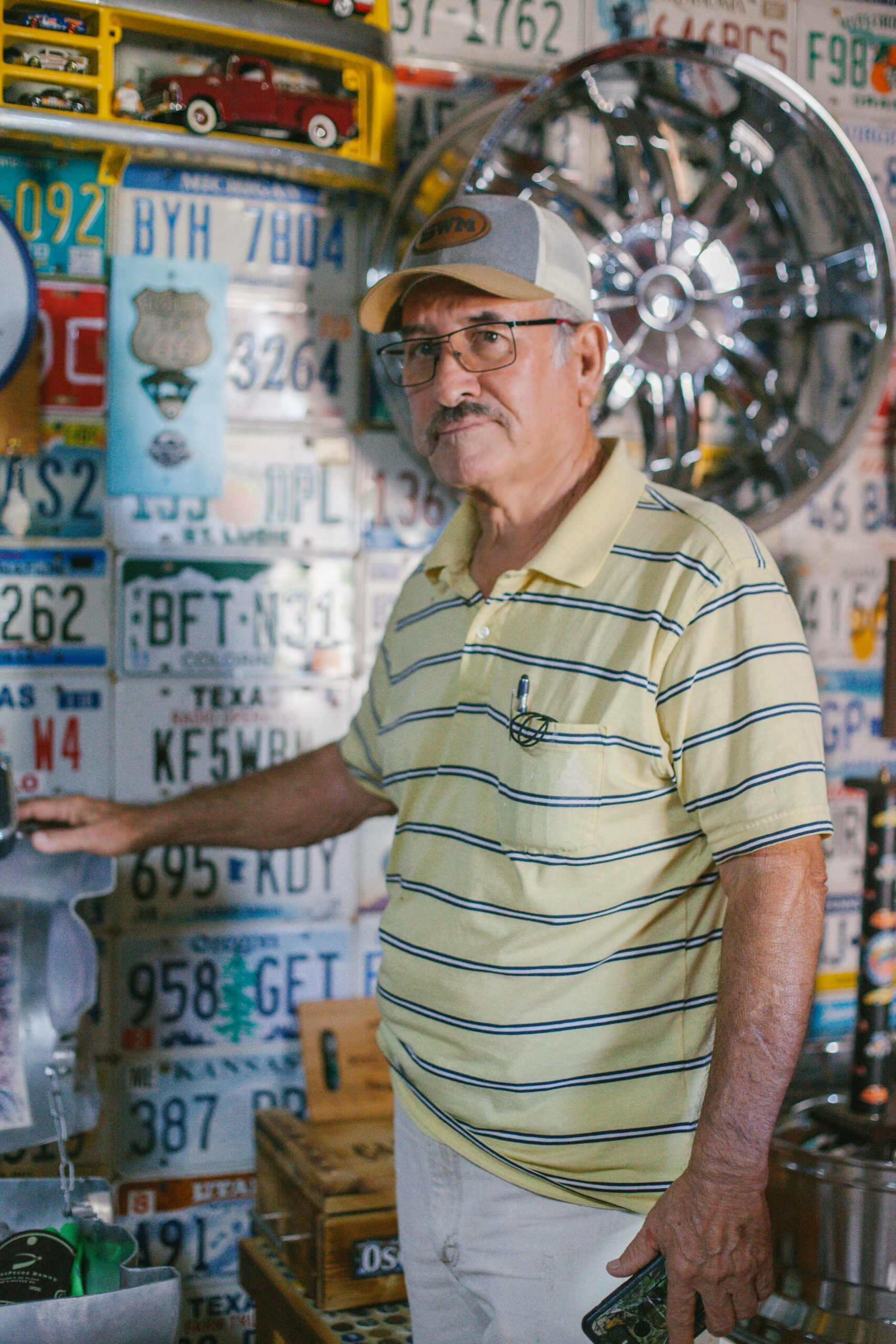 Photos and Text by Hannah Gentiles

Over the last several decades, Oscar Cabello has used his own hands to build and create a space full of practical tools and whimsical treats. On his compound, located across from the Fort Davis State Bank in Presidio, Texas, he has built several apartment units painted a warm terra cotta color; his home, painted an inviting sage color; and a series of storage units the same striking terra cotta color. He built all of these structures by himself with his own hands, gradually growing bit by bit over the many years he’s been in Presidio.

If you follow the driveway between the storage units and apartments, you’ll eventually dead end at his office. The first time I entered the office doors to pay the rent on my storage unit, my jaw instantly dropped at the stunning way Oscar had decorated his office. As Oscar hit the lights, I first noticed the two far walls lined floor to ceiling with old license plates — a wallpaper of sorts, but with metal license plates meticulously laid side by side. As I began to further scan the room, my curiosity about the items that filled the space deepened. I said in shock, “Did you make these?!” Oscar responded with a humble “Yes.” He then gave me a quick tour of the space, pointing out the largely car and road-themed pieces. I told Oscar, “This is a gallery!” He was shy about it, but was also clearly deeply proud of his work. Each time I’d return to pay my monthly dues he’d give me a little bit more of a tour, sharing new pieces or bits I’d missed the last time. 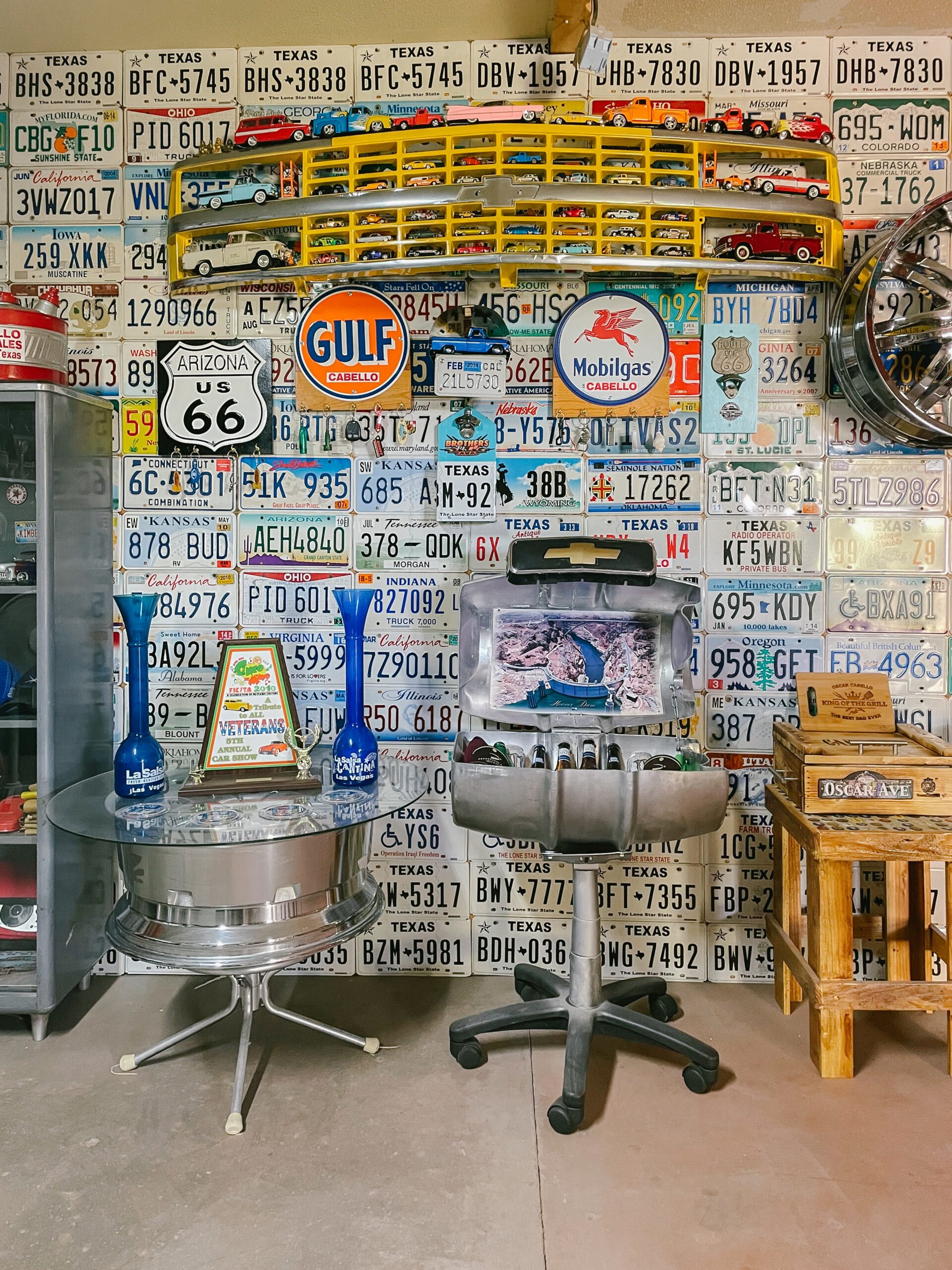 A couple decades ago, what is now several storage units was once one store front, selling various car parts and trinkets and offering light automotive work like tire repair. Oscar’s interest in cars started as a young boy in Mexico and has continued throughout his days. Upon deciding to retire the store, he brilliantly turned the space into much-needed storage units, saving the corner of the building for what is now his office. It all began with a project in the early 2000s using his growing collection of recycled license plates to fill the blank walls; from there he continued to explore. Today, the office is adorned with trinkets and treasures, some gifted and many created by Oscar. His last name, “Cabello,” makes a common appearance on an assortment of items from hats to plates to street signs. Almost all of the created pieces serve some sort of practical purpose but with a quirky twist. Around the room sits a spinning side table made from a metal rim with a round glass top, a beer cooler made out of an old gas tank, an old yellow truck bumper he uses to exhibit a plethora of miniature cars, and many others. Everything is displayed with intention. The hubcaps on the north side of the wall have been carefully patterned and positioned as if they are in a gallery, and the screwdrivers below hang facing down in neat rows. Everything from the keys for the storage units to the photos he has hung up of the 2008 flood are carefully presented.

Crafted furniture ensures a welcoming atmosphere. Using license plates to form a lamp shade, he turns on its light to better see his other creations, offering a seat on the metal bench fashioned from a truck bed or at the table made from an old stop sign. Upon the octagonal table sits a sign that reads “Man Cave.” Oscar agrees –– this is how he views the space. While technically his office, this is where he spends the majority of his time, among his creations, dreaming up what to build next.

Walking with Oscar, he shares tales about attending and often winning at many car shows over the years; part of his wall is dedicated to those awards. He speaks fondly of his prized (literally) burnt orange ‘72 Chevy pickup –– he later walks me out to the shed he’s built to house the truck. It simply shines. From under the hood to the seat coverings, it’s in pristine condition. ‘72 is the year his son Oscar Omar was born. He’s created this entire space by himself and it will someday belong to his kids — that’s his motivation. He speaks very proudly of his (now grown) children: Oscar Omar, Lorena, and local star Roxy (both in her performances and her karaoke skills). He boasts of all of their talents and most specifically, their musical prowess. “I used to be good too, but I never did anything with it, like they are,” he adds with a smile, as he shows me a black hat with Lorena’s name on it that sits on the dashboard of his truck – part of her merchandising.

Just before I make my leave, it hits me what Oscar had been trying to communicate with me about his newest project. When I first arrived, he had pointed to a new sink and mirror set in the corner. I know little about cars, so Oscar kindly informed me about the origin of almost all the pieces he pointed out. As I took a final snap of the sink and mirror set, Oscar commented, “That was from my pickup.” I paused a second, trying to think what that could mean, then looked closer. The mirror was made from a car part, the radiator to be exact. He’d spray painted it gold and attached the mirror to the front. Similarly the sink had been attached to the top of a standing vintage tool box, and the towel rack was in fact a hung steering wheel. Once again, my jaw dropped.

When asked if he would be up for folks to visit his hidden gallery or possibly up for selling or even creating custom pieces, Oscar answered, “The fridge is always stocked with beer, they can come by anytime.”

Thank you for sharing your art with the rest of us, Oscar.

If visiting, please remember this is also his home, treat him and his creations with respect — and consider commissioning him to make a unique piece for yourself! 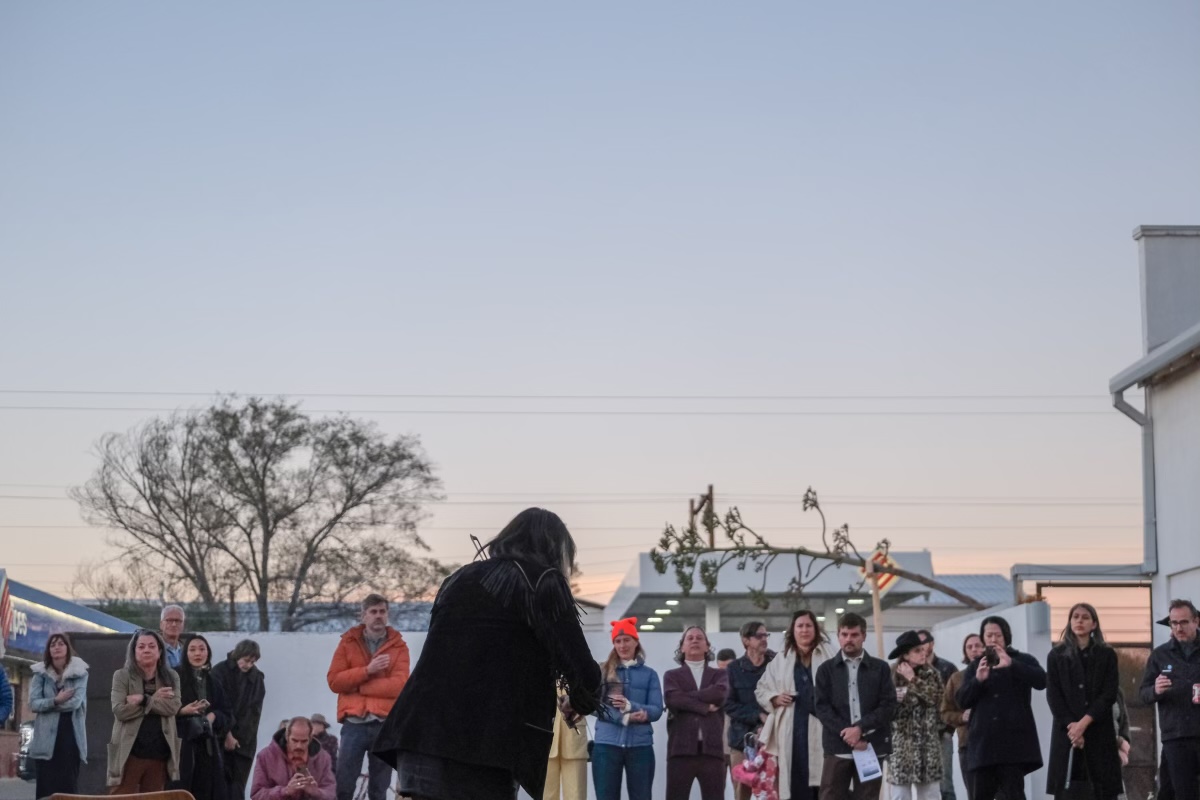 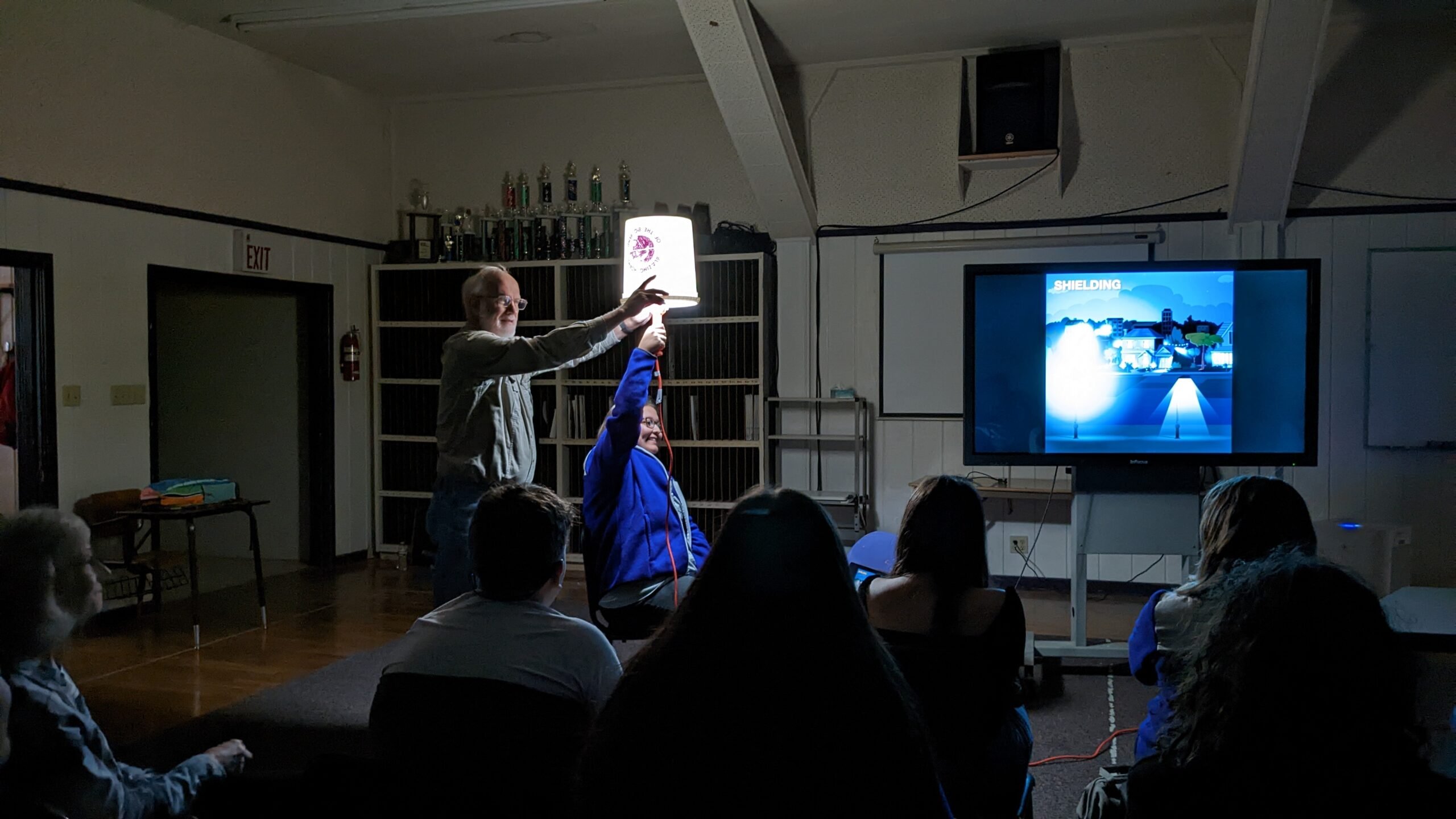