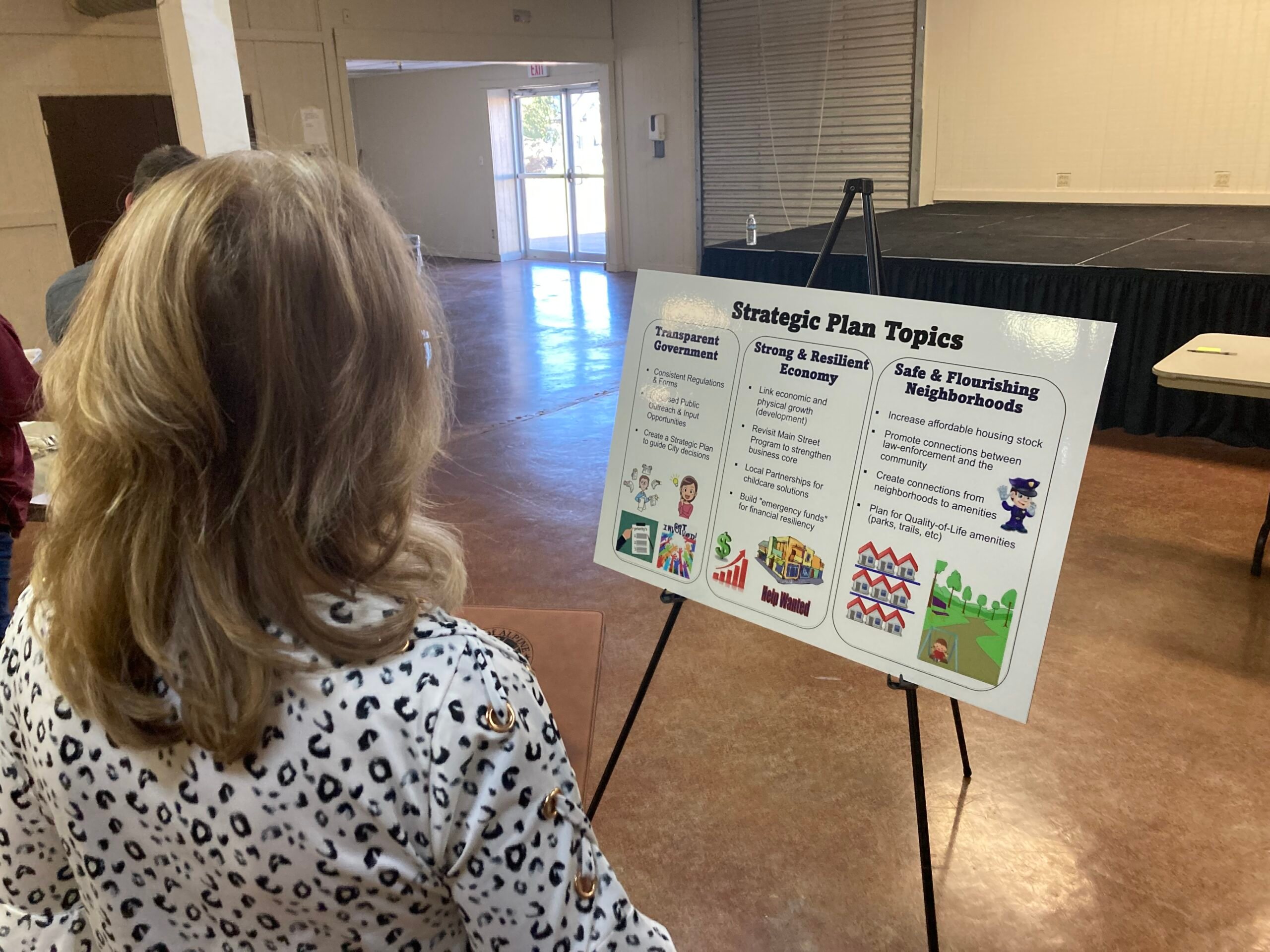 Residents of the City of Alpine attend a series of public town halls this fall to voice their concerns and priorities regarding the town’s future. The meetings are the initial step in the city’s new strategic plan process. Photo courtesy of Marcia Tuck.
Subscribe

ALPINE — The City of Alpine is in the early stages of developing a strategic plan, a process that has begun with a series of six town hall meetings and will ultimately result in a road map for city staff and officials to help set priorities, track progress and achieve government accountability.

Through the town halls, the city is soliciting public feedback on six primary topics — transparent government, strong and resilient economy, safe and flourishing neighborhoods, sustainable infrastructure, effective and efficient services, and an “other” category meant to act as a catch-all for various citizen concerns.

“I really want the residents to know, one, they do make a difference, and two, this is their community,” said City Manager Megan Antrim. “This is our home, our town, this is where we live, so it’s important for them to be involved.”

Antrim, who is spearheading the initiative along with city grant writer Marcia Tuck, said for now, the goal is to set priorities for the city for one-, three- and five-year increments, but could involve a longer-term plan in the future. Currently, the city is handling the strategic planning process in house, but may opt to hire an outside firm down the road, she said. The plan will be a living document, said Antrim, and the first of its kind the city actually plans to utilize.

“I really want to see Alpine grow and succeed, and this plan is the first step. Let’s try it, let’s see how it works. It may work so well that we do it every year and expand on it, and sooner than later we’ve got a 50-year plan and everyone can see the direction the city is going,” said Antrim.

Antrim, who was appointed interim city manager in May 2021, then hired full time in March 2022, previously served as the city’s director of finance, starting in 2013. She said during her time at the city serving in those two positions she saw a need for everyone to get on the same page and begin working toward shared goals, as opposed to carrying out their individual visions.

“For me, in the past, it’s been hard working under different city managers who have different ideas, different plans, different directions,” said Antrim. “I can come in here and [say] this is my plan and this is what we’re gonna do, but that’s my plan. I really want to know, what does the city want to do? What do the residents want to do?”

The city decided talking to its constituents would be the best way to start the strategic planning process, said Antrim. Town hall meetings have been held since October, with the final two coming up this month, one at 6 p.m. Thursday, December 1, at the Alpine Public Library and the other at 12 p.m. Wednesday, December 7, at the American Legion Hall. Antrim said they are only collecting in-person feedback, as opposed to online submissions, due to limited resources.

Anywhere from 25 to 40 Alpine residents have attended the meetings thus far, according to Antrim. “Now in the grand scheme of things is that a lot? No. But it still shows that there’s people in Alpine who care, who want their opinions heard,” she said.

At meetings, locals are given an overview of the strategic plan concept and are invited to brainstorm anonymously via sticky notes on large pieces of paper titled after the major topics. Antrim said the written information is acting as their “raw data” and is being input into a master spreadsheet.

Antrim said she felt it was important to get a better understanding of what Alpine citizens wanted for their city beyond the immediate issues that are typically vocalized to her of fixing potholes and water leaks, though those are a part of the conversation as well, she said.

In establishing a strategic plan, Antrim said the city is seeking to be more transparent than in the past and the document should help keep the city accountable to its citizens.

For example, in regards to street repairs, something Antrim considers a large, multi-year project, the public could better track progress and feel their concerns are being addressed with the guidance of a formalized plan.

How the city will budget for forthcoming infrastructure upgrades that may be brought to the forefront in the strategic planning process is also part of the conversation, said Antrim. Whether the city will opt to pull money out of reserve accounts, or go out for bonds, the plan will have to align with the city’s financial goals.

“If the priority is all paved roads, then the first thing to [ask] is how are we going to fund this? Are we going to bring paving back in house and if so, how do we buy the equipment?” said Antrim.

Financial feasibility and transparency will be key moving forward, she said. The city is currently paying off some debt, and last borrowed money in 2011, said Antrim. In the past, the city has received criticism for borrowing money for a railroad quiet zone, a project which was never completed. It’s a situation she hopes to avoid repeating in the future. Antrim, who is also a resident of the city, said she understands the public’s frustration.

“I want to see that if you say you’re gonna borrow a million dollars and raise my taxes that you’re gonna do what you said — that, unfortunately, wasn’t done in the past,” said Antrim.

The city is currently working to upgrade its wastewater treatment plant to comply with Texas Center for Environmental Quality standards. Antrim said the town’s water and wastewater infrastructure has been a subject raised by locals in the strategic-plan town halls.

Many of the ongoing topics relate to the city of Alpine’s growth, whether it be population, economic or commercial. How could the town expand to offer a childcare facility, more affordable housing and more restaurants, for example. But at the end of the day an increase in growth hinges on the reliability of city systems, said Antrim.

“We want businesses to come in and we want housing developments to start, but our wastewater treatment plant [needs to be able to] handle the additional flow,” said Antrim. “It’s economic development, but I don’t want the business to come in and the first thing they say is, ‘Hey, I’ve got a sewer backup going on.’”

So far, environmental and green initiatives haven’t been a major topic of discussion, said Antrim. Brewster County has been made aware of the strategic plan, but any involvement with Sul Ross State University has yet to be realized, said Antrim.

Alpine City Council has received updates on the strategic plan town halls, but has yet to vote on anything related to the effort. However, when the document is drafted the governing body will need to vote to approve it, said Antrim. Once the town halls have concluded, the city will host a number of workshops starting in January, with the city council and the public, to digest information gathered in the strategic plan forums and outline next steps.

“Once we understand what those priorities are, then we can actually break it down into goals and action items. After December, we’ll actually start having what we’ll call priority workshops to take this raw data and develop what our priorities are and have the council make those decisions,” explained Antrim.