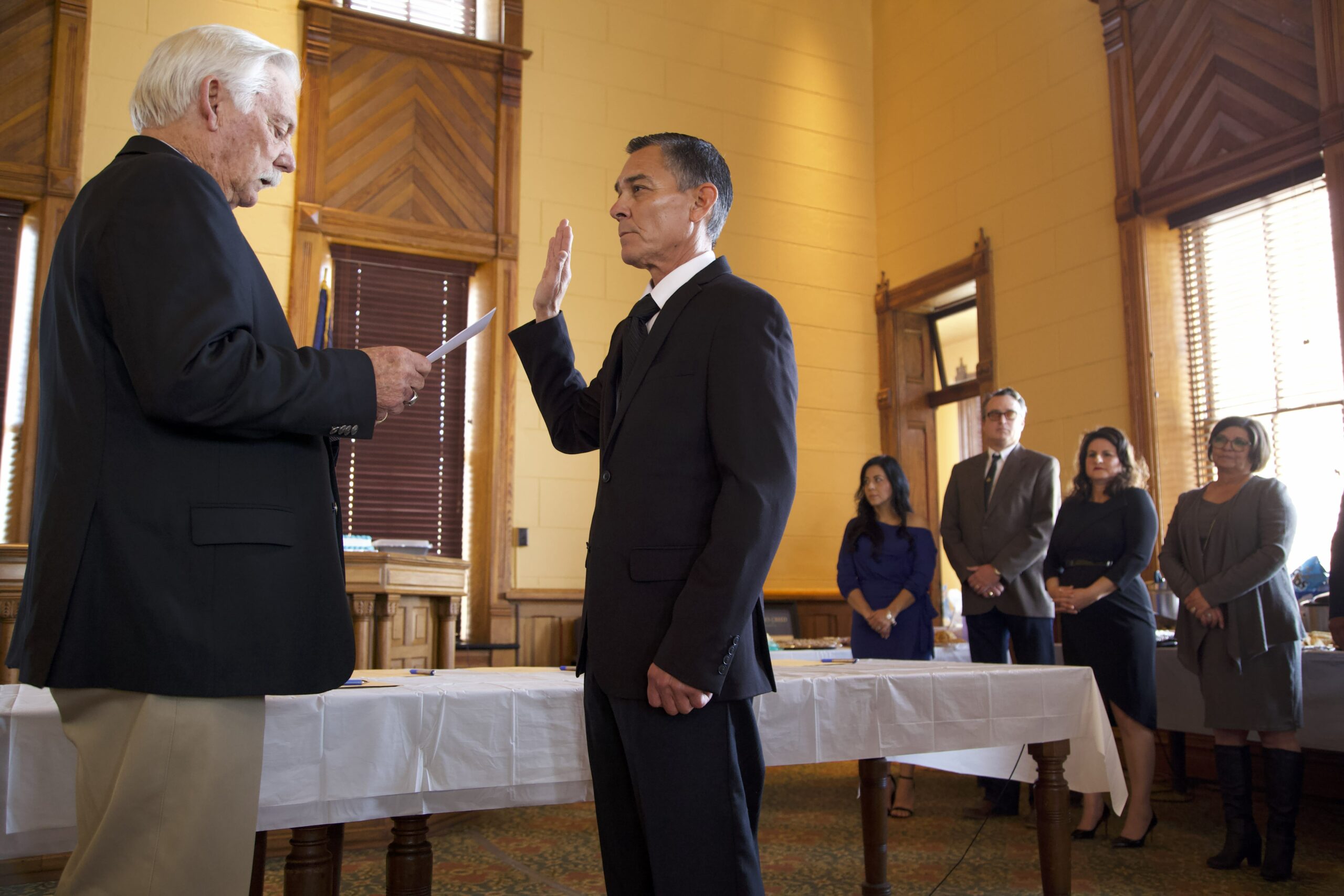 MARFA — Upon the ringing in of a new year, a new county government was sworn into office on Tuesday at a heavily-attended inauguration ceremony in the Presidio County Courthouse.

Local citizens and family members packed into the courthouse chamber to witness the newly-elected officials take oaths of office, before partaking in a generous spread that included chili cooked by County Commissioner Precinct 4 David Beebe.

The ceremony began with Presidio County Judge Jose Portillo — then still county judge-elect, by a matter of minutes — welcoming attendees and expressing optimism regarding the elected officials that would soon be serving Presidio County residents.

“I’m excited about the team that we have coming on board,” said Portillo. “I think we’re gonna do you a bang-up job.”

County Commissioner Precinct 4 David Beebe was sworn in by his father, Roger Beebe, who eight years prior had also sworn his son into his previous role as Justice of the Peace Precinct 1.

“I’m really proud to be here today,” said Beebe as he introduced his father, before giving a tongue-in-cheek nod to those who helped him along the way. “I want to thank everybody who helped me — the people who may not have helped me but actually did help me,” he said. 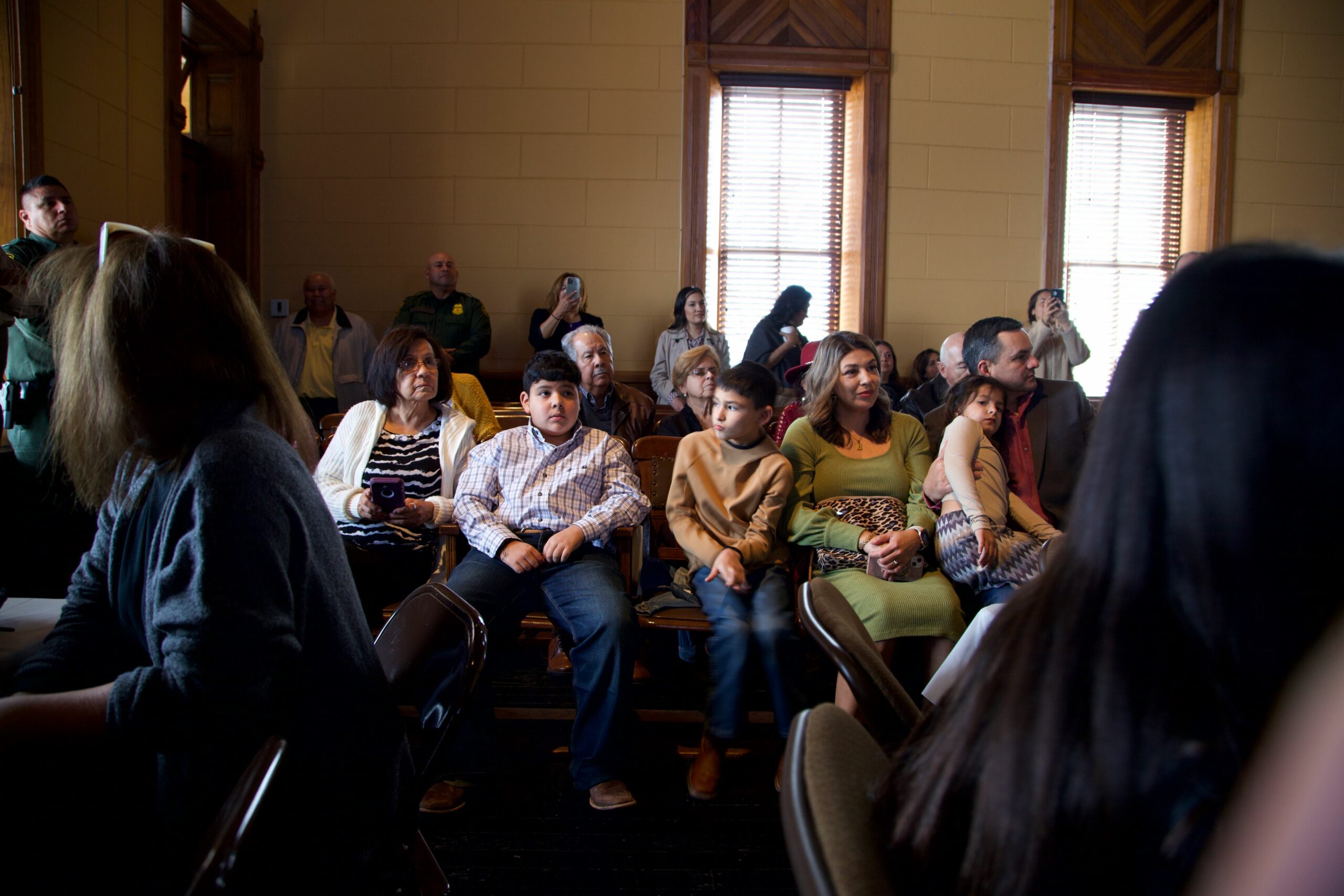 Friends and family of newly-elected Presidio County officials and locals gathered in the Marfa courthouse on Tuesday afternoon to witness the official swearing in of the county’s leaders. Photo by Mary Cantrell.

The ceremony was capped off with the robing of Justice of the Peace Marquez, whose father did the honors. Folks in attendance were encouraged to stay for refreshments and conversation, and to ask any questions they may have for their newly-elected officials.

Precinct 2 Justice of the Peace Juanita Bishop was sworn in at a separate ceremony in Presidio with her son, Mason, by her side — Bishop, who has served since 2009, has traditionally been sworn in in Presidio so she can remain on-call.

Those gathered felt a sense of hopefulness in the proceedings and the following celebration. “I felt like there was a lot of positivity in the room, a lot of optimism for the next four years,” said Hilary Beebe after witnessing the inauguration of her husband David. “I think we have a lot of good leadership coming in and a lot to be optimistic about.”

Judge Portillo remarked that his swearing in “feels very humbling,” and that he was eager to get to work serving the residents of Presidio County. Portillo is the first county judge to hail from Presidio, the county’s most populous city, which shares a border with Mexico — a vital relationship Portillo hopes to foster during his tenure, beginning with the long-awaited completion of the rail bridge between Ojinaga and Presidio.

“Mexico and the United States are great trade partners, we have a port of entry, we have a rail — we’re on the cusp of getting it done and making it a significant port of entry, and that’s why we’re going to need our relationship with Mexico to make sure those things can happen,” he said.

Portillo said he planned to meet soon with Texas Representative Eddie Morales and with the Texas Department of Transportation regarding the bridge’s progress.

Later that evening in Presidio, the American Legion — where Portillo serves as Post Commander — threw a reception with food provided by Iris Galindo of Mayahuel Ojinaga and music by Roxy Cabello.

Presidians packed the Legion Hall to hear brief remarks from Portillo’s brothers — though the siblings poked plenty of fun at each other, they fought back tears as they recreated the official robing ceremony for the crowd. “You’re the man for the job,” said Roberto Portillo. “We are all truly blessed and I am humbled to be your brother.”

Portillo — who began his career in law enforcement — said that it had been a long journey to the top. “I feel the weight of the county on my shoulders,” he said. “Everything that I’ve been through has prepared me for the job I’m about to do.”

In his brand-new robes, Portillo introduced Margarito Hernandez, freshly inaugurated as county commissioner for Precinct 3. “It’s about teamwork,” Hernandez said. “It’s not just about the north or the south, it’s about doing what’s best for Presidio County.”

presidio county
Stay in touch with The Sentinel
Related