Presidio tears up the dancefloor on New Years Eve 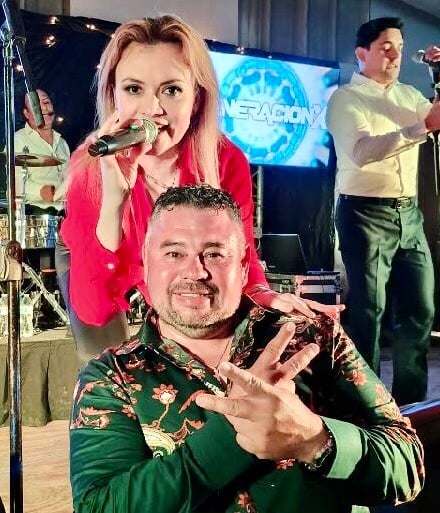 PRESIDIO — On Saturday night, Presidians young and old showed off their dance moves as they celebrated New Years Eve in style. Chihuahua City-based band Generacion X provided the soundtrack for an unforgettable evening — the proceeds for which went to benefit the Santa Teresa Church.

The event was organized by the church’s event planning committee, made up of Steven “Nicky” Alvarez, Netty Marquez and Lorena Tavarez. The trio wanted to bring back the tradition of hosting big community-wide dances for New Years Eve, which traditionally were held at San Benito Hall on the church grounds.

Those events slowed down as church leadership shifted and the pandemic ground social gatherings to a halt. For years, the only New Years gatherings were held by the church’s prayer group — traditional religious ceremonies that blended devotionals with religious songs.

Santa Teresa’s Father Mike Alcuino explained that he’d been hesitant to approve more secular social events at Benito Hall because people tended to be flaky with their reservations — and the proposed gatherings typically didn’t include or benefit the whole community. “I changed my mind because this event was really for the church,” he explained.

The group pitched the event as a way to raise funds for the parish hall, where community events ranging from weddings to funerals are held. The building’s outdated swamp coolers aren’t enough to combat sweltering Presidio summers, and the heaters weren’t keeping people warm in the winter months, either. “When this plan came about, I said, ‘Yeah, let’s do it,’” Alcuino said.

He didn’t regret changing his tune. Though he didn’t bust any moves, he was thrilled to see so many people from the community come together to have a great time. “It was well, well, well attended — Benito Hall was packed,” he said. “That evening, you could truly see the community spirit come alive.”

The band — Generacion X — had been a part of Presidio New Years celebrations in years past and volunteered to come back to town to resurrect the party. The soundtrack ranged from Top 40 reggaeton hits to old-school romantic ballads and Spanish-language versions of country staples.

It was so much fun that partygoers refused to evacuate the dancefloor at 1 a.m., when the event was scheduled to end. “We turned the lights on, and still people wouldn’t leave,” said organizer Netty Marquez. The stubborn party-goers scraped together $900 in a matter of minutes to convince the groundskeepers to keep the space open for an additional hour.

Marquez and her fellow organizers had gotten tons of feedback over the years that Presidians really missed having social events at the church — especially after the pandemic put a damper on celebrations hosted by the city as well. “We had a lot of people say, ‘We’re glad you’re doing this for the church,’” she said.

For Marquez, the event wasn’t just about raising money, though that was the original intent of throwing the party. “It was like a reunion. We got to see people from high school and teachers and people who have moved away come back,” she said. “We’re more than a community — we’re all family.”