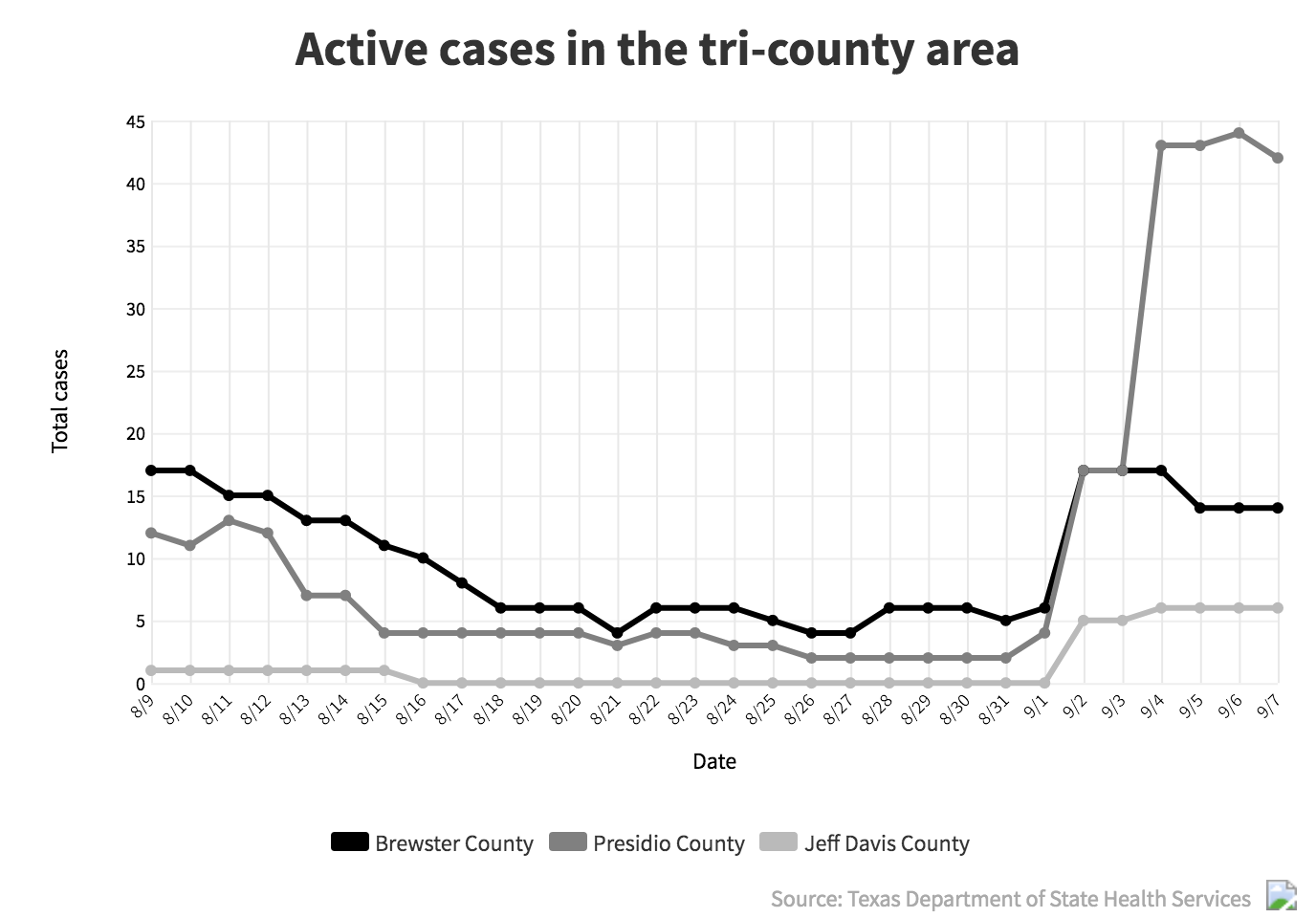 Data from the Texas Department of State Health Services shows active case numbers climbing across the region and particularly in Presidio County, where at press time there were more than 40 active cases, up from less than 20 a week ago. Graphic by Stephen Paulsen and Abbie Perrault
Subscribe

TRI-COUNTY — There are signs of a second outbreak of coronavirus in the tri-county, with state data showing rising case counts across the Big Bend. But unlike the area’s first outbreak in late June, which was largely centered in Alpine, this case surge has been fueled by rising case numbers in Presidio County.

For more than a month, and despite regular mobile testing sites, the tri-county saw few new cases. Case numbers in Presidio, Brewster and Jeff Davis counties even went down at points, as state officials adjusted for people who (for example) may have been tested in Marfa but nonetheless live outside the county.

But after that month-plus-long lull, cases started to climb again on September 1. That day, the number of cases in Brewster County increased by 11, from 192 to 203 — a small number, but nonetheless the biggest case increase Brewster County has seen in over a month.

The situation was the same in Jeff Davis County. There, according to state data, coronavirus case numbers have almost doubled, going from eight at the end of August to 14 at press time.

But by far the worst-hit county this time has been Presidio County, which also saw its case counts double.

On August 31, there were just 50 confirmed coronavirus cases in Presidio County, according to state data. But that number quickly started climbing, hitting 66 confirmed cases by September 2.

At press time, the Texas Department of State Health Services was reporting 91 confirmed coronavirus cases in the tri-county. And in a news release on Tuesday, Presidio County Judge Cinderela Guevara announced a dozen more cases, bringing the total number of locally confirmed cases to 103.

As usual, there are some important caveats with coronavirus data in Texas. When The Big Bend Sentinel reported on the first outbreak in July, we noted that a lack of widespread testing made it difficult to tell how quickly coronavirus was spreading or when the first cases appeared. Were state testing sites in the Big Bend in June accurately showing a spike, or were officials finding more cases because they started doing more testing?

This time around, the Big Bend didn’t exactly have those same problems. Marfa and Alpine now see testing at regular intervals, making it more likely that case rises reflect a real growth of coronavirus in the region.

At the same time, officials have struggled to get testing in some outlying cities and towns — most notably in Presidio city, where officials lamented for weeks that they weren’t getting enough testing. Presidio went almost two months without a testing site, from June 30 until August 24. And with many of the recent cases showing up there, it’s difficult to parse out exactly how much the new cases are the result of new testing versus a growing spread of cases.

On August 24 and 25, state officials did finally organize back-to-back testing in the border city. In total, around 600 people, many of them locals, had a chance to get tested in their hometown.

Of the Presidio County cases reported since then, a vast majority have been from Presidio. In the news release announcing 23 new cases on Tuesday, for example, 19 were from Presidio while just four were from elsewhere.

In the view of some county officials, that isn’t a coincidence. Asked what was driving the recent case surge in Presidio County, Local Health Authority John Paul “J.P.” Schwartz said: “Testing — that’s it.”

“It’s been hard to get consistent testing down there [in Presidio], and they finally managed to test a bunch of people,” Schwartz said. “If they kept testing like that, people would be astounded how many cases there are.” Still, he acknowledged the rise in cases after weeks of relative calm was worrying.

“I’ve kind of gotten away from the terminologies,” Schwartz said, “but you can think of this in a way as a second wave.” The first wave, around late June, demonstrated coronavirus’s arrival in the area, he said. But “now, it’s all well-established in the community.”

Then, of course, there are all the usual issues with Texas’ coronavirus numbers. Local and state counts of cases started diverging months ago and have only grown farther apart.

The same is true in Brewster County, where the state is reporting 203 cases and local officials are reporting 217. County officials typically get announcements on new cases from the Texas Department of State Health Services, making it especially confusing why the numbers have remained disparate.

In Presidio County at least, the region’s international workforce and community life may be adding to the confusion. The county has developed its own case numbering system as it receives reports of cases from Village Farms, said Schwartz.

“Village Farms data also can include people who spend time in Mexico but list residency in the U.S.,” he said. But some of those workers technically “may not be citizens of the U.S., so [they] can’t go on state registers.”

Or, take the news release on Tuesday announcing 23 new cases in Presidio County. Only 14 of those cases included isolation and release dates — but of those, the most recent cases were ordered into isolation on August 17.

Those out-of-date case announcements have been a recurring issue in Presidio County and across Texas, and they raise further questions about exactly how many still-contagious people are out there. Those are questions with big implications for Marfa residents, especially as local schools reopened this week.

Still, looking at state data — which provides fairly accurate snapshots of the coronavirus situation across Texas — it’s clear the surging case counts are more than mathematical funny business. Since the start of September, according to state data, active case counts have climbed from four to 42 in Presidio County, six to 14 in Brewster County and zero to six in Jeff Davis County.

So, what’s driving the latest outbreak? In the United States and across the world — including Indiana, the state of Georgia, France and Israel — case counts have climbed after schools have reopened. But in the tri-county at least, there’s so far little evidence that schools are a big contributor in the trend.

Within days of reopening Presidio Independent School District, school officials discovered a high school student had coronavirus — prompting them to shut down school campuses last month. But since then, school officials haven’t learned of any other infected students or school workers, Superintendent Ray Vasquez said in an email on Tuesday.

In the past month, more than a dozen teenagers and children in Presidio have been confirmed to have coronavirus, according to anonymized state data. But with lots of PISD students taking classes from home — and with those age groups capturing some adults who could have already graduated or dropped out — that data doesn’t reveal much.

Likewise, in Alpine, schools might seem a likely culprit in climbing case counts. But Alpine ISD hasn’t publicly announced any cases by press time, and Sul Ross State University — which has started tracking its own coronavirus numbers — has so far found little evidence of an outbreak among students and faculty. Just one of the school’s 1,496 Alpine students has an active case of coronavirus, according to the school’s online COVID-19 dashboard, as do zero of the school’s 350 faculty and staff members.

Schwartz, the local health authority for Presidio County, doesn’t think schools are driving emerging cases in Presidio County — noting that schools have been careful and have adopted precautions like mask and social distancing rules. Still, he added that he’s “concerned about the inherent risk” — especially with sports games, which bring together both local families and out-of-town athletes.

“My only problem is that sports are continuing,” he said. “ I think they should have mandatory testing of student athletes. That’s the easiest place for [coronavirus] to spread through the population.”

Even in non-COVID times, he added, regional school athletic programs saw semi-regular outbreaks in recent years, including cases of antibiotic-resistant staph infections. And athletes don’t always want to self-report symptoms, for fear they could be the reason a sports practice, game or season gets canceled. “Those same dynamics could come to pass in this thing,” he said.

But instead of being linked to the schools, Schwartz said there’s no common denominator for the recent coronavirus cases. The county has classified its cases as all community spread — meaning county residents could contract the virus anywhere from a school or grocery store to just meeting with friends.

“There’s not a pattern — but it all seems to be local spread,” Schwartz said. “[Coronavirus] is in the community now, and it’s mostly spreading through gatherings. Family reunions, parties or just the little things.”

In Brewster County, Ekta Escovar, the local health authority, did not respond to multiple requests for comment. But Stephanie Elmore, the county’s emergency management coordinator, said she also hasn’t seen a clear pattern in the new cases there — though she also doesn’t think schools are to blame.

“I know the schools have rules,” Elmore said. And at Sul Ross State University, where she’s currently taking classes, she says classmates have been wearing masks and “seem to be taking it seriously.”

Still, she added, schools “can only do so much” and “there are bound to be cases at every school.” And when it comes to college at least, what matters is “what happens after class,” she says — for instance, if students obey on-campus protocols only to then attend a crowded house party.