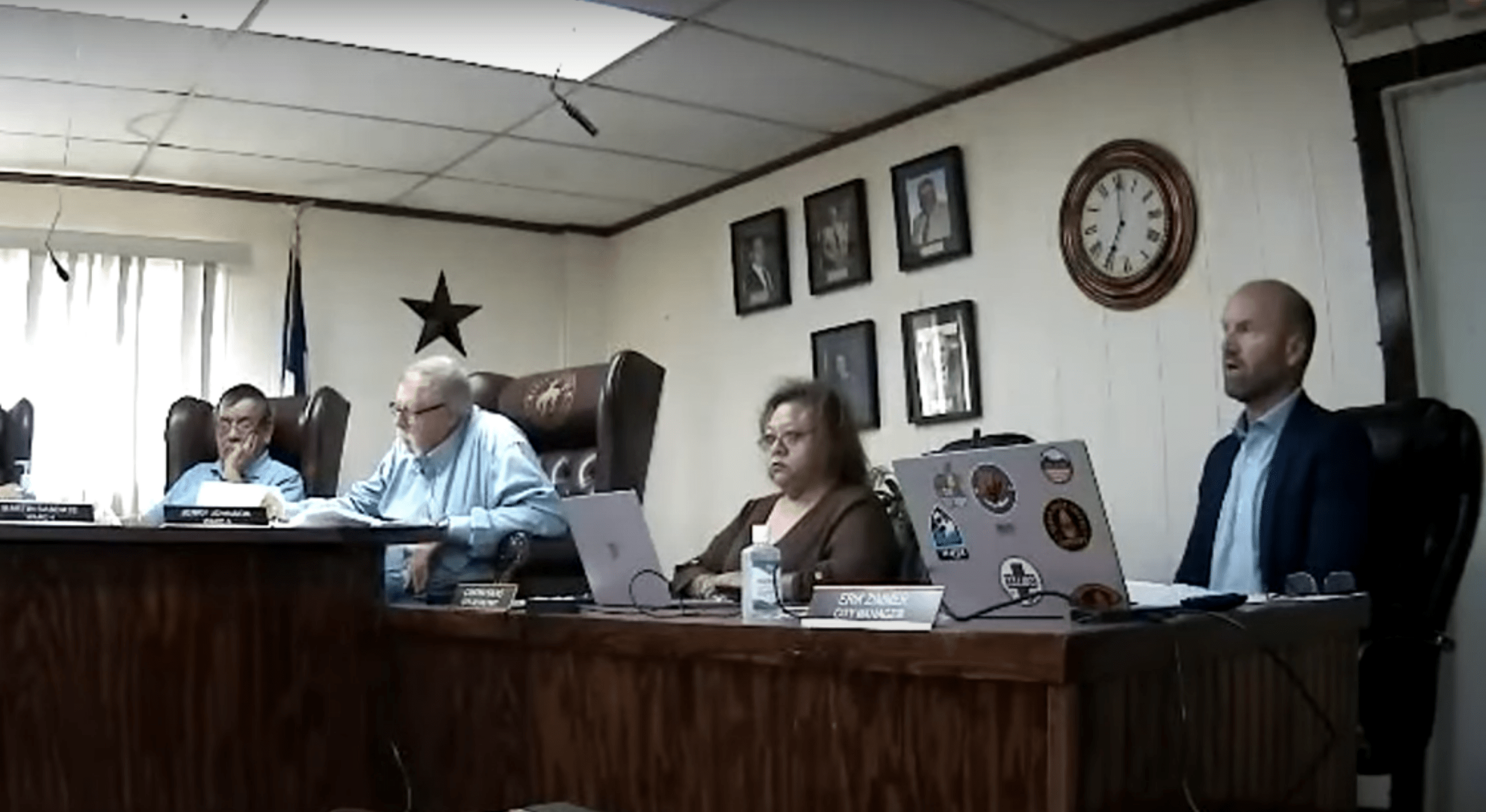 ALPINE — When Judy Stokes ran for Alpine City Council this spring, she promised “a different direction.” At her first meeting at the helm of Alpine’s Ward 1 on Tuesday night, Stokes led the charge to terminate City Manager Erik Zimmer, City Secretary Cynthia Salas and City Attorney Sandy Wilson. By the end of the night, Zimmer and Salas were gone, with Wilson resigning effective immediately, and the chief of police suggesting he might be next.

With terminations on the agenda, citizens turned out in the public comments period to talk about the city’s future. Laura Goldman welcomed the new council “to what feels like a new season,” she said. “Lots of good work has been done, goals have been created and achieved, but we’re just getting started.” She praised the transparency, camaraderie and communication among the current city staff and asked the council, “How will what you do make the city better, and council better and be a better representation of your community?”

The council went through the agenda at a quick speed, with Zimmer sharing information about federal funds coming to the city soon and human resources’ Lorena Crespo-Gonzales announcing the pool would be staffed and reopened on Saturday, May 29.

But the agenda item the crowd and council was anticipating soon arrived. Stokes swiftly motioned to terminate the contracts for Zimmer and Salas, with Councilmember Sara Tandy, another newcomer, seconding it.

As the action item moved into further discussion, citizens in attendance spoke to council about Zimmer’s recent unblemished performance review, programs and initiatives he’s accomplished and the good morale among the current city staff under his leadership.

One Alpine resident in attendance questioned whether Salas could hold public office, given a felony the city secretary had committed for conspiracy to commit bank fraud in 1991. The city attorney clarified that the city secretary position is not an elected office and can be held by someone with a felony charge. Mayor Andy Ramos also clarified the accusation that Zimmer had been terminated at the end of his previous term as city manager in 2017, explaining that Zimmer had resigned for personal reasons.

“I’ve heard rumors about a personal vendetta,” said Alpine resident Karen Cantrell as she approached the dais. “I don’t know what the reasons are, but we’re here to discuss, so I’d like to know what are the reasons and who do you have to replace these people? These people right here have done a good job.”

Though citizens, the city attorney and a fellow council member asked Stokes to provide her reasoning or motivations for the terminations she had slated, Stokes refused to talk. “We don’t have to have those, we are an at-will employment,” she said. “I put it on the agenda and I feel comfortable in my position.”

Stokes did not return requests for comment, leaving the public with little reason as to why she initiated the swift terminations. On social media, some citizens responding to the terminations complained about Zimmer’s salary and his use of a city vehicle to visit his family in Albuquerque – something that had been contractually agreed upon by the city when Zimmer was hired.

The city attorney advised council to consider the risks of terminating the employees, saying, “Just because you’re an at-will employee in the state of Texas doesn’t mean you can blatantly violate somebody’s employment contract. Nor can you go against policy and procedure of the city to fire them at-will. I don’t think that’s a good response. I think you need to give a good reason.”

Zimmer spoke briefly, outlining his time at the city, his positive performance review and the contract agreement he had with the city. “It feels like today we’ve been stood up in a firing line,” he remarked.

The mayor recommended tabling the motion in order for council to review the contract further, saying, “I don’t want to hold the city in liability. It’s taxpayers’ money and I feel that if we go into a lawsuit, it could go either way.”

Wilson advised the council as the city’s lawyer that terminating employees, even in an at-will state, without cause, could have legal ramifications because of the contracts the employees had signed. Wilson also built out a case – presenting printed texts and a timeline of events – that led her to believe these terminations were the machinations of Sheriff Ronny Dodson, Stokes’ former employer of 19 years.

She referenced previous disputes between the county and city, including the leaking of a video of an Alpine police arrest by an employee at Dodson’s gun store, as previously reported by The Big Bend Sentinel. She also pointed to Dodson’s recent practice of denying the admittance of arrestees to the jail until they had been seen by a magistrate.

In an interview after the meeting, Dodson denied the allegations made by Wilson. He said he was not Stokes’ campaign manager, though he had donated to support her campaign. He also denied allegations made by Wilson that he had directed his deputies not to assist Alpine Police, calling it “a boldfaced lie.” The sheriff also said the jail admits the most dangerous criminals without magistration, pointing to the jailing of a recent murder suspect.

The vote advanced, with councilmembers Stokes, Tandy and Martin Sandate moving to terminate Zimmer, while councilmembers Chris Rodriguez and Jerry Johnson voted against the motion. Audience members shouted out of the meeting’s order, asking why Stokes had chosen termination. Mayor Ramos called the meeting to order and responded, “She just said we’re going in different directions.”

Wilson, whose role was going to be considered in an executive session behind closed doors, indicated she wanted it to happen before the public. Stokes motioned to terminate Wilson, but the motion died without any council member seconding it.

“As city attorney, tonight my client’s rights were severely violated,” Wilson said. “This city is about to be subject to probably millions of dollars worth of lawsuits. I will not tolerate illegal behavior, so I am exercising the clause in my contract that is a material breach made by the city council against my city and I am resigning effective immediately.”

Alpine Police Chief Robert Martin addressed council after the resignations, saying he enjoyed working with Wilson, Salas and Zimmer. He said his job with the city has been “a battle,” adding, “I don’t know what’s going on, but if you don’t like me, put me up on the agenda next.”

After the council meeting, Councilmember Rodriguez concluded, “They’ve paralyzed the city,” going on to say, “The mayor talked about appointing someone as interim city manager, but it’s not up to him, it’s up to council.” While council plans to meet next week to discuss personnel, it’s uncertain who will sign off on the agenda, since it is typically approved by the city manager or city secretary.

Rodriguez expressed a lack of confidence in the city’s operations going forward. “Right now we are all freshman councilors. I am considered the senior councilor and I have actively participated for less than six months,” she said. “I relied heavily on guidance from Councilor [Rick] Stephens and I would meet with the city manager right before every meeting to have him explain things I didn’t understand, such as the audit. These people have come on, had never attended a meeting before being elected, didn’t attend the first meeting after their election, and came on board and made changes of this magnitude,” Rodriguez said. “I am scared for our city at this point and question whether I want to continue and be a part of this.”

Stokes promised a different direction, and on day one of her tenure, she ensured that. With no explanation during or after the meeting from the council members leading the charge and no comment from the mayor, what that direction is remains to be seen.