At least 11 fire hydrants in town are malfunctioning, records show 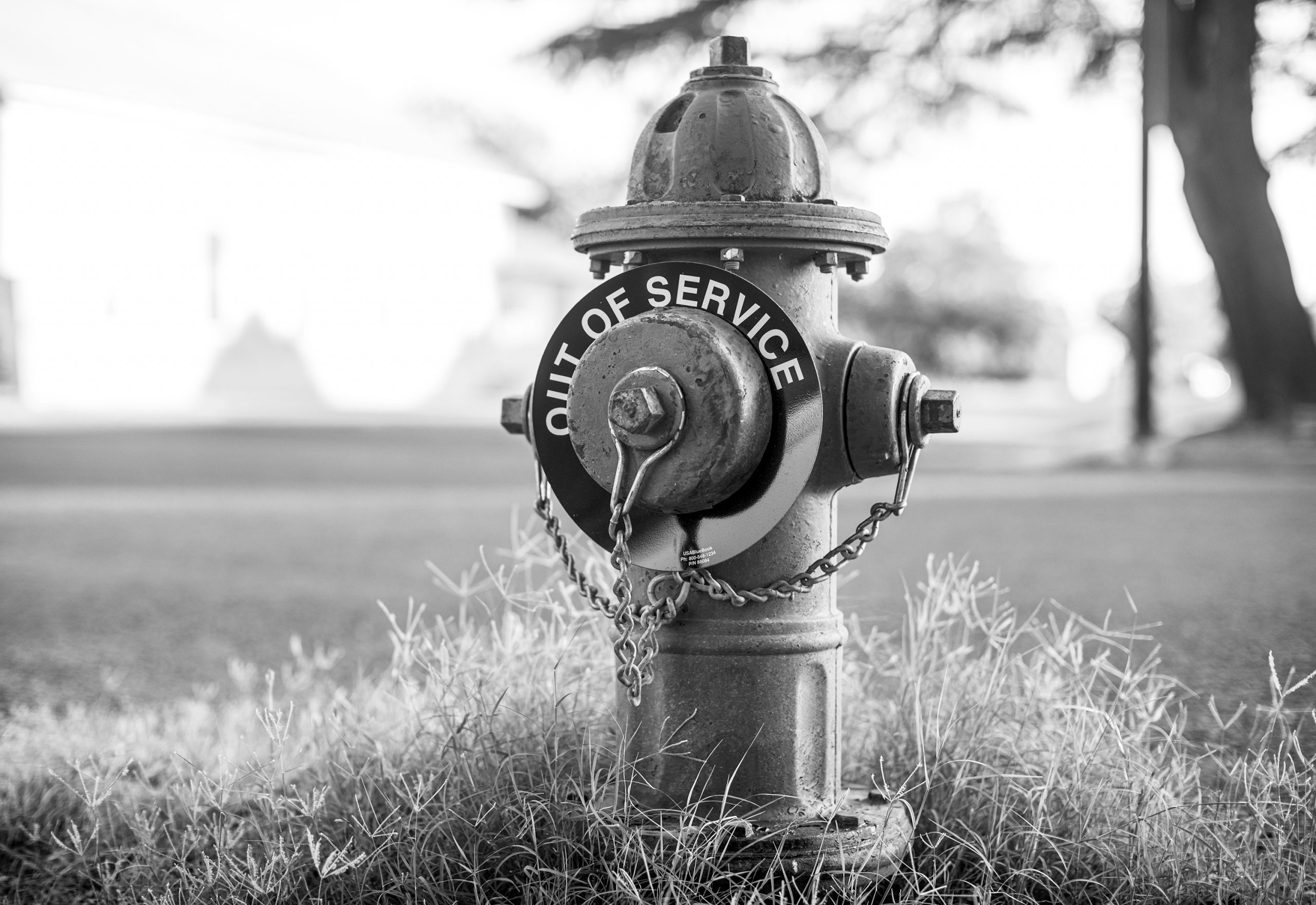 Staff photo by Maisie Crow / After the Judd fire earlier this year, new attention has been given to the state of the hydrants in Marfa, and “out of service” plates were installed on faulty hydrants across town.
Subscribe

MARFA – When firefighters for the Marfa Volunteer Fire Department last inspected all of the fire hydrants in and around town in October 2019, they reported that 11 of them were either malfunctioning or inoperable, according to documents obtained by The Big Bend Sentinel through an open records request.

In the past year and half, none of them have been repaired, said City Manager Mandy Roane. “Our former Public Works director [Jeff Boyd] was given the list of faulty hydrants in 2019, but did not conduct repairs. Additionally, repairs weren’t conducted in 2020,” she said. “With so much shut down because of COVID and Public Works being short-staffed, they weren’t able to complete them.”

The actual number of malfunctioning hydrants may have risen since the 2019 report. As The Big Bend Sentinel reported last week, firefighters could not get the hydrant directly across from the burning Judd Architecture Office building to open. Lonnie Hebert, one of the firefighters that responded to the blaze, said the issue caused a 20 to 30 minute delay.

That hydrant, on the corner of Oak and Highland, does not appear to be on any of the inspection reports obtained by The Big Bend Sentinel. “The main ones downtown are always tested. They’re easy to get to, they’re right there. That leads me to believe that that hydrant, the last time it was operated, it worked –– otherwise it would be on our list,” said Gary Mitschke, the chief of the fire department.

The hydrants in question are in varying degrees of disrepair. The 2019 report indicates that the majority of the faulty hydrants are either stuck shut or produce no water. One hydrant, on the corner of Galveston and Ridge, is so old that the fire department wrote that it needs an adaptor piece for it. According to a 2005 inventory report, that specific hydrant is from 1948 – over 70 years old. At the time, the company that inventoried the hydrants recommended the city overhaul the top of the 1940s hydrant as it was hard to operate.

The inspection reports show that half of the hydrants that were malfunctioning in 2017 were experiencing the exact same issue in 2019, possibly indicating that the city did not conduct repairs on them over the two years in question.

Chuck Salgado recently became the interim Public Works director in April after Boyd’s departure. Salgado was then named Water/Sewer supervisor this month after the city council divided the Public Works director job. Salgado said he doesn’t believe that the Public Works Department had been repairing the hydrants. “I’m pretty sure it’s never been done. As long as I’ve been here I’ve never seen them done,” he said. “We don’t have any repair kits, the tools needed to repair them, so I’m going to have to buy that stuff.”

Mitschke said that in the past the department has notified the city to a malfunctioning hydrant, and when they inspect it the next time, it’s still experiencing the same issue. “I don’t follow up on that until the next time we check them, and if they’re still not working, we report it again,” he said.

The fire hydrant directly across the street from the high school has had the same issue for over three years. According to the inspection reports, the stem where the fire hose attaches to the hydrant is “frozen shut.”

Marfa ISD Superintendent Oscar Aguero was unaware that this hydrant, which is right across from the gymnasiums on campus, couldn’t be operated. “It does concern me in case something happens,” he said.

Nearly all of the faulty hydrants are located in residential and commercial parts of town. The hydrant behind Porter’s has been dead since at least 2017. The hydrant on the corner of Lincoln and Austin, right beside the First Christian Church, doesn’t release water. And, the hydrant right in the middle of town couldn’t be opened as almost three-years-worth of renovations to the Judd Architecture Office burned to the ground.

The Presidio Volunteer Fire Department is experiencing similar problems with their hydrants. As The Presidio International reported this week, the department just wrapped up inventorying all of its hydrants and discovered that five of them weren’t working.

Right now, the Marfa Fire Department, which is made up of volunteers, is in charge of inspecting the hydrants to ensure they are in working order. “Both for training and then to assist the city to make sure things are operating, we simply open them up. When we go up to a hydrant, we’ll open it all the way up and then close it down, and that’s how we test it,” Mitschke said.

After the inspections are conducted, the fire department sends the reports over to city administrators, whose duty is to ensure these issues are fixed. “That’s up to the city to get in there and look at that and see what might’ve happened with it,” Mitschke said. “They’re metal. They’ll rust up and freeze up. It’s possible to twist the stem enough to where it shears off. A lot of different things can happen.”

In the aftermath of the Judd fire earlier this month, new attention has been given to the state of the hydrants around town. Mitschke said the department is busy inspecting all of the city’s hydrants. Water Supervisor Salgado recently had his staff install “out of service” plates on the faulty hydrants. He also signed his staff up for training in August, said City Manager Roane. “They’ll all be working on getting them up-to-date. I believe they’re planning to start the more basic repairs before then too.”