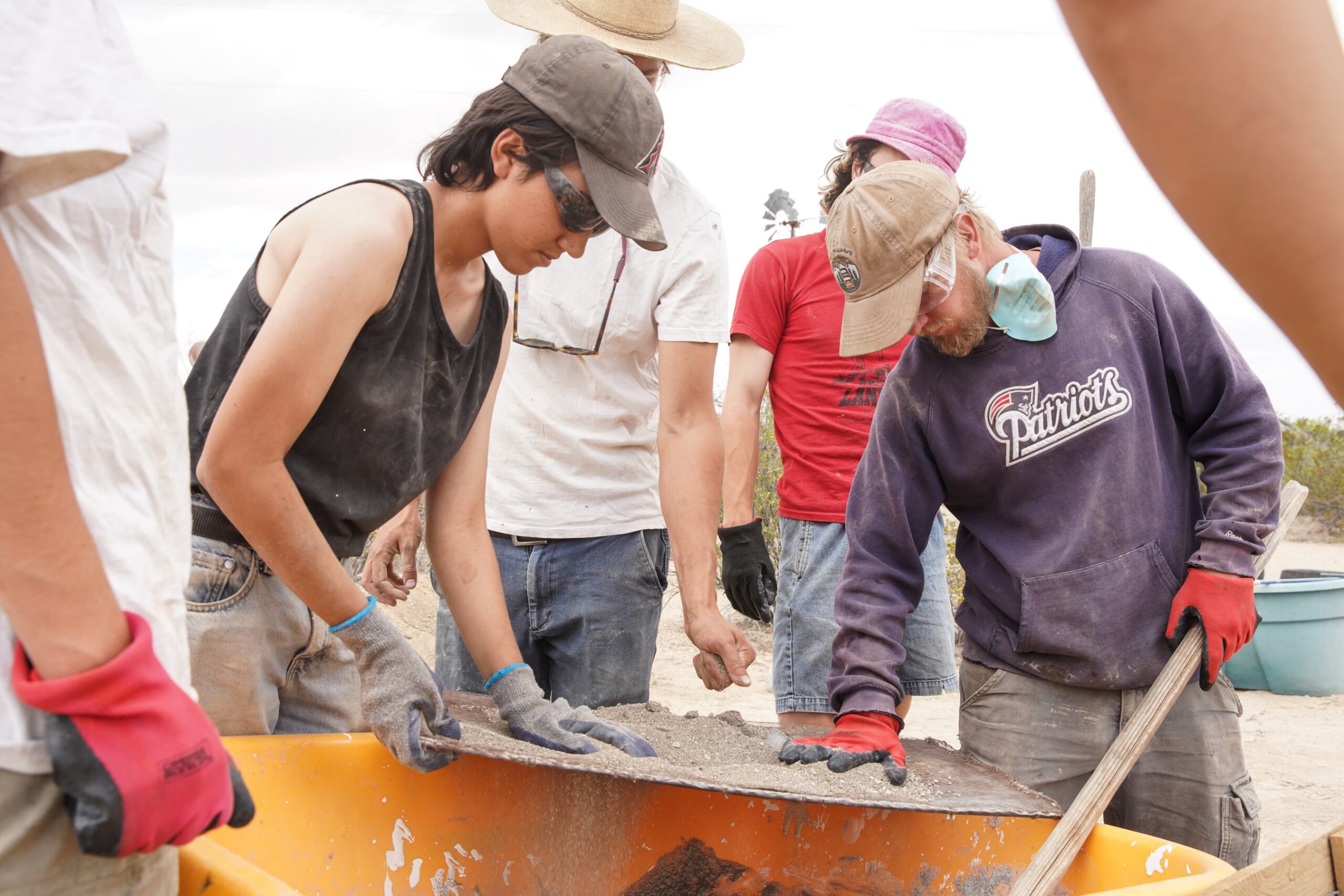 Photo by Rinne Allen. From left to right: T Palermo, Bob Estrin, Jack Brooks and Francis Rosa participate in a workshop at the School of Constructive Arts.
Subscribe

TERLINGUA RANCH — “How do we provide homes from the earth without destroying our home, the earth?” That’s one question that Bob Estrin, executive director of Terlingua’s School of Constructive Arts, uses to guide his organization. In a region known for adobe, Estrin is combining local earth-based building methods with a worldwide focus, pulling insight from ancient building traditions across the globe as well as the latest technology in sustainable living.

The School of Constructive Arts is a field school based in the former homestead of Don Bryant, a longtime Terlingua Ranch resident known for building distinctive domes out of rebar and ferrocement. “He was beloved by many,” Estrin said. “He was a builder, a teacher, a farmer, kind of an eccentric guy.”

Dré Williams, a cook at Terlingua Ranch Lodge’s Bad Rabbit Café, owns 65 acres just down the road from Bryant’s old place. “He used to ride his bike everywhere, or hitchhike the ranch road,” Williams remembered. “I was giving him a ride, and that’s how I was introduced to him. He told me all about the dome houses.” Over the next few years, Williams and Bryant struck up a friendship as neighbors and fellow earth builders. “He taught me a lot about how to do things, working with rocks and all kinds of stuff you can use out here without having to pay a pretty penny at McCoy’s.”

Estrin, an architect, met Bryant on a trip to the Big Bend in 2017. He was introduced to Bryant by James Jackson, a land surveyor and environmental activist. Jackson and Bryant had long wanted to start a field school together on the ranch, then called the Brighter Day School. Just before his death in 2019, a group of locals from across the region formed to help make that dream a reality. It was an unlikely coalition forged by local builders, business owners and oddballs, including notable south county residents Jon Sufficool and Cynta de Narvaez.

While Bryant was still alive, Estrin served as a consultant for the school’s construction. After his death, Estrin’s passion for the project intensified, and he stepped up to serve as a leader for an organization that would advance Bryant’s vision of an educational center for earth-based building, desert living and ecological study. Rumors started to swirl around the ranch about what would happen to Bryant’s place. “We were a little worried when we heard they were going to make a museum, but then we met the guys that were out here, and they were pretty cool. It seemed like they would bring to life everything he started out here,” Williams remembered.

With the community’s blessing, Estrin went full speed ahead, aided by co-founder James Jackson and Lizette Rohana, a friend of Bryant’s from Presidio who has served the organization since day one. “We’re about to grow the board — it’s a great group forming,” Estrin said. “We’re a small organization, so we’re all wearing many hats.”

Last spring, the School of Constructive Arts launched a pilot volunteer program aimed at cleaning up the property and building it out as a campus that could host future students. The cleanup effort was no small feat. Over the years, one of the buildings had become weighed down with over four feet of trash. “We’ve totally cleared it out, stabilized it, got the roof sound. We rewired it and got a basic woodworking shop going,” Estrin said.

In return for all their hard work, the volunteers were treated to a world of eye-opening experiences. On one field trip, the pilot group of six ventured to Ojinaga, where they participated in an adobe workshop led by local adobero Sandro Canovas. Rohana then coordinated a visit to the adobe home of artist Carlos Rohana to study passive cooling techniques. Back at their Terlingua Ranch base camp, they also constructed a solar array, built an earthen pizza oven and hiked to the South Rim.

Estrin wants to expand programming to students of all ages. He’s currently working with a classroom at Presidio ISD to hopefully bring younger students out to Terlingua Ranch for “an experience-based curriculum.” “Why do seasons happen? What’s the carbon cycle? These kinds of questions, but through hands-on programs,” he explained.

The live-in programming will ideally be aimed at college-aged students. “The big idea for the future is to host college-aged students who come out, they learn, they live there, they experience the desert, they experience living minimally close to the land, and then they go back to their programs, and it transforms their education and their professional practice,” he explained. “That’s the long-term goal, trying to integrate with colleges and universities and get an institutional connection that will have a broader reach.”

To house the next class of volunteers, Estrin has launched a fundraiser to help build a shower, a composting toilet and a lightweight shade structure for shelter and cooking. The students who arrive in fall 2022 will then begin work on the campus’ main building, an earth-based structure that will be used to host workshops and events.

For Estrin — a graduate of Cooper Union and a former firm architect — the project is about more than just making mud bricks in the Terlingua heat. “Traditional knowledge, embodied knowledge that people gain from building by themselves, doesn’t make its way into the academic world,” he explained. “And then people will graduate from architecture school and spend an entire lifetime designing buildings with very little experience or direct knowledge of construction, of the material realities which they’re dictating. So a big aspect of what we’re trying to do is bring together those two worlds.”

Locals who wish to visit the school or attend future workshops are encouraged to visit the School of Constructive Arts website and sign up for the newsletter’s “local” option. “Anyone who wants to come out and work with us for a day or two, or just come by and say ‘hi,’ we welcome that,” Estrin said. The school also hosts an Instagram page @constructivearts for those who wish to keep tabs on the organization’s progress. Donations can be made online at constructivearts.org.