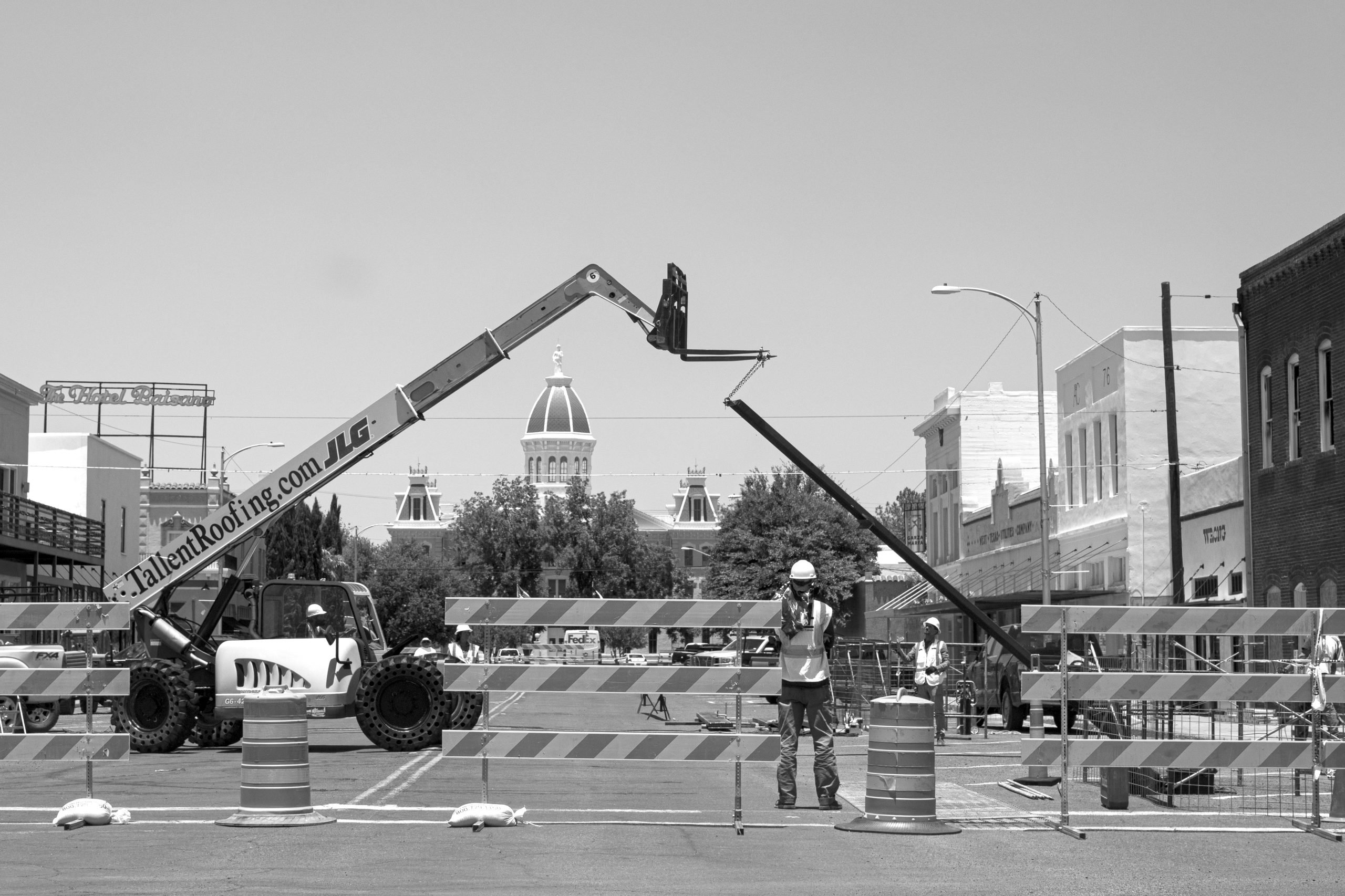 Staff photo by Maisie Crow. After a fire caused significant damage to the Judd Architecture Office, steel beams were put in place to provide structural support and protect from high winds.
Subscribe

MARFA — Nearly eight months after a fire ravaged the Judd Foundation’s Architecture Office on Highland Avenue, the remediation of the building has entered its final phase and is slated for completion by the start of February.

The investigation into the cause and origin of the fire remains ongoing, per a Judd Foundation spokesperson.

The 5,000-square-foot building, which the late artist Donald Judd had used as his architecture office, caught fire in the early morning hours of June 4, 2021, setting the roof ablaze and causing the center of the second floor to cave into the first floor. Marfa Fire Chief Gary Mitschke at the time called the destruction “a total loss for the most part,” noting the building was “basically gutted.”

Now, a multi-phase process to repair the fire damage is coming to a close. The final phase of the process, focusing on the remediation of the basement, began on Tuesday, January 25, and is expected to wrap up by February 1, according to a Judd Foundation spokesperson. Once the remediation is complete, the foundation can once again continue with the historic renovations the building had been undergoing since 2018, which were put on hold by the damage from the blaze — that restoration had been only weeks from completion at the time of the fire.

“It feels excellent, because it’s one step closer to beginning restoration,” said Rainer Judd, president of the Judd Foundation.

The initial phase of the remediation process, which began in September 2021, was focused on stabilizing the building’s structural integrity. The second phase, which began in October, was focused on clearing out debris from inside the building and allowed investigators to begin the process of attempting to determine the fire’s cause and origin. That investigation was led by The Hanover Insurance Group, the Judd Foundation’s insurance company, though other companies and contractors involved in the building’s restoration process were on site during the process.

The current, third and final phase is focused on mitigating the growth of mold in the building’s basement, spawned by the water used to put out the fire combined with the West Texas heat, per a foundation spokesperson.

Once the remediation is done, the foundation will spend the ensuing six months consulting with its project architects and engineers on the continued restoration work, which is expected to kick off in the late fall or early winter of 2022 and last for 12 to 18 months. The project architect attached to the restoration expressed optimism about the project moving forward, noting the team had been on-site to help salvage as much of the existing structure as possible.

“From the moment the fire was extinguished in June, SCHAUM/SHIEH has worked with Judd Foundation and on-site crews to save as many of the building components as possible,” said Troy Schaum, partner at SCHAUM/SHIEH. “This work has included both bracing the still-intact brick walls and sorting through the collapsed and damaged materials on the interior. The building is stable and ready for the future restoration. Moreover, there are varying amounts of every portion of the building we have been able to recover from flooring to decorative molding.”

Despite the damage, much of the original structure remains intact, noted Pat Arnett, principal at Silman, the project engineers attached to the restoration. “The remaining brick structure is largely intact and has been braced to significantly reduce the stress on the historic brick walls,” said Arnett. “The roof has been replaced by a temporary light-gauge steel bracing structure at the parapet. Portions of the north and south ends of the second floor remain, and temporary bracing is in place to fill in for the missing second floor in the center portion of the building. With the bracing now in place, the remaining structure is safe for future work.”

In addition to being thrilled to continue restoration work, Rainer Judd said she has been reminded throughout the process about how much the building means to the surrounding community — she noted she has been approached by community members seeking to ensure the building is being restored.

“It is important for them to know that we’re taking care of their building,” said Judd. ”We at the Judd Foundation are very much stewards, and we consider it our responsibility as caretakers of all these buildings. It’s still the community’s building, and we’re hoping that they know that we’re continuing to work on it and return it to Main Street in the best condition we can.”