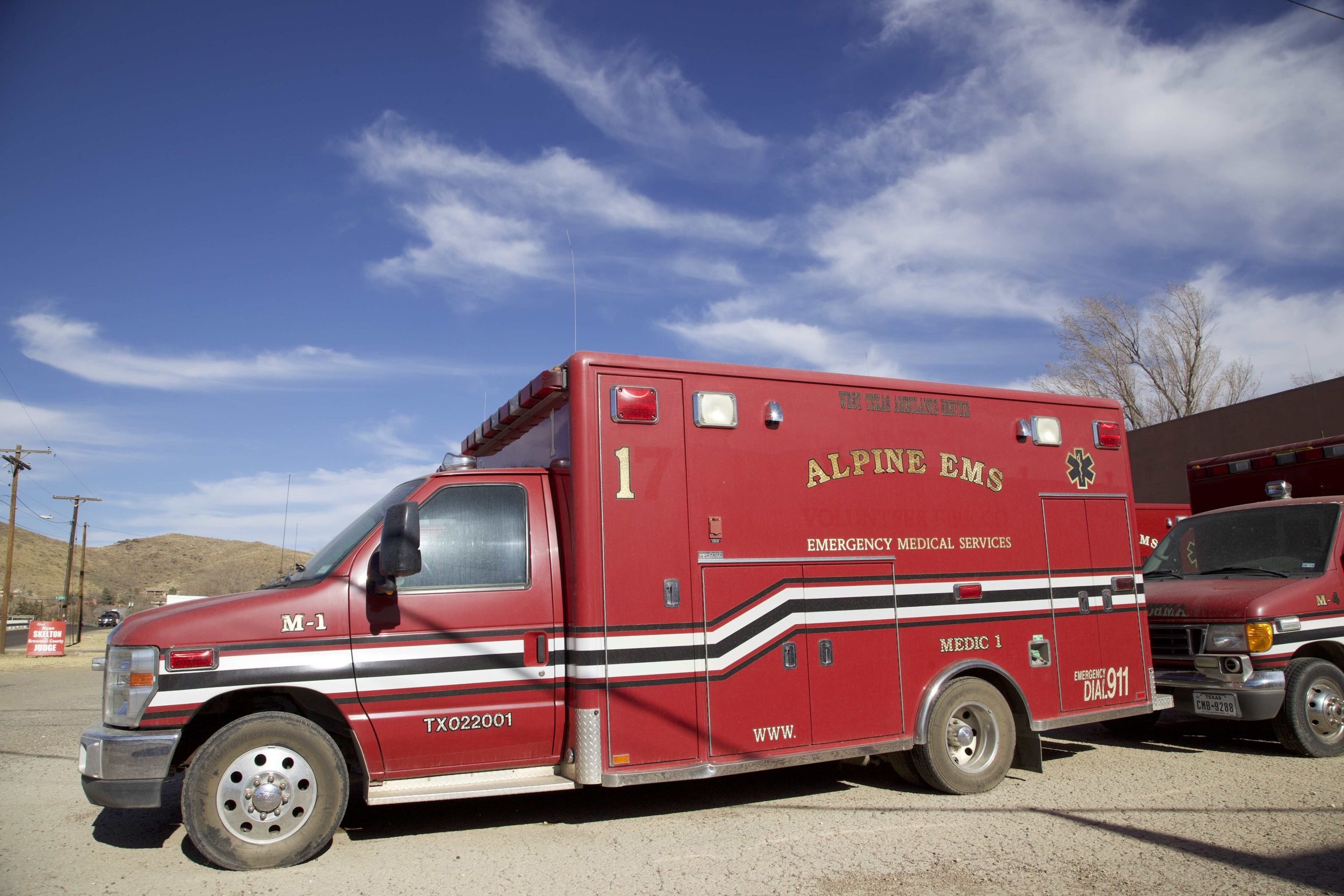 Brewster County Commissioners Court met last week to hear proposals from potential private-sector EMS providers. Michael Scudder, who operated the area’s ambulances since 1985, passed away this past December. County commissioners, the City of Alpine, and an EMS task force are working to select a new provider. Photo by Mary Cantrell.
Subscribe

North Brewster County was suddenly left without an EMS provider this past December after Michael Scudder, who operated the area’s ambulances since 1985, passed away unexpectedly. Terlingua Fire and EMS has stepped in to fill the service gap with an impending deadline of April 30, while the county and city decide the future of the area’s emergency services. County commissioners, the City of Alpine, and an EMS task force are working together to select a new service provider.

Interested vendors include American Medical Response (AMR), Emergent Air and City Ambulance Service. All have existing ties to West Texas and a desire to expand their services to the area.

“First and foremost, we want a service that will respond to emergencies quickly with a well-trained and professional crew. In my opinion, each of the three vendors is well established and capable of running the EMS service,” said Big Bend Regional Hospital District Executive Director J.D. Newsom, who is a member of the EMS taskforce. “I think the decision will come down to which of the vendors will be the best partner and fit with the community.”

All three vendors agreed to operate North Brewster County EMS services on pre-existing subsidies previously provided to Scudder by the county and city — $13,397.75 a month from the city and $15,000 a month from the county, adding up to a total of $336,000 a year.

In previous meetings, county commissioners, Judge Eleazar Cano, and Terlingua Fire and EMS’ Greg Hennington expressed doubt that any private EMS provider would take on the project, citing a lack of profitability due to the vast rural area and low call volumes. In 2021, Alpine EMS responded to a total of 1,200 calls.

A Big Bend Regional Medical Center-run EMS was on the table as of early February, but that option has since been dropped in lieu of a private vendor, said Newsom. While a county-run EMS option has not been officially ruled out, Newsom indicated that an outside vendor now seems most likely, given the time crunch.

Judge Cano previously stated he hoped a transition of the new EMS provider would be underway by now, but the commissioners court ultimately voted to table a decision on the matter both in Friday’s special meeting and this Tuesday’s regular meeting in order to give Alpine City Council more time to review vendor proposals. The council will hear the providers’ presentations this week, and the commissioners court will then meet again on March 24.

Present at Friday’s special meeting to hear EMS-provider presentations were Judge Cano, all commissioners with the exception of Ruben Ortega, as well as many city council members, city administrators and members of the public. One resident who spoke at the start of the meeting advocated for a locally-run EMS, and another urged the importance of citizen feedback.

Presentations focused on 911 ground services, but all vendors have the capacity to provide emergency air services as well.

Lee King, principal of Emergent Air, a company based out of El Paso, was first up to present to the commissioners court. Emergent offers air ambulances as well as ground services. King said Emergent is experienced in flying into the area and is already in discussions with the hospital regarding an interfacility truck. Emergent currently services El Paso, McAllen and Roswell, New Mexico.

King promised flexibility and offered to act temporarily should a county-run EMS eventually materialize. Without robust data on the previous EMS, King said it was hard to gauge the scope of services, but Emergent would work closely with the county going forward to assess needs. As for staffing and equipment, he said they could pull staff from El Paso, provide training and utilize used ambulances for the time being. King said renting the fire station, where EMS is currently dispatched from, for their operation would also be a possibility.

King said that Emergent was up for the challenge of providing emergency services in a sprawling region full of unpaved, rural roads. Commissioner Sara Colando said whatever entity is chosen to take on EMS for Brewster County will have to be aware of long drive times and accidents in remote areas making them unavailable for 911 calls that might come in elsewhere. King said they would likely pursue mutual aid agreements to help in those situations.

Hennington asked if Emergent would be open to adding a local physician to their medical advisory group and join the Texas “J” Regional Advisory Council (JRAC), a local trauma system network, to which King was amenable.

Next up was City Ambulance Service, represented by four staff members. City Ambulance is the third largest private ambulance company based out of Texas, with over 100 trucks across the state. They currently run EMS in Crane County and Upton County’s emergency services district, both located in the West Texas region. The company also has an existing relationship with the Big Bend Regional Medical Center, where they assist with discharges and interfacility transfers.

Their ambulances are fit to a mobile intensive care unit level and can accommodate behavioral health issues, said Richard Trevino, vice president of business development at City Ambulance Service. He said the company would hire locals whenever possible and seek to be a part of the community.

On the subject of community involvement, City Ambulance often gives tours of their ambulances to schools and churches, said Trevino, and performs educational outreach in the form of CPR and Stop the Bleed training.

Trevino said they intend to allocate an ambulance to cover civic events, like football games, while ensuring another ambulance is available for emergencies elsewhere. City Ambulance stations their crews in hotels to funnel money back into the local economy, they said.

Trevino assured commissioners the company will work to have a local face on the operational side. Trevino said they can start in 30 days and would like to be able to continue to utilize the fire department building.

Last to present was Randy Wideman, regional director for American Medical Response. Wideman said AMR has been serving the area for 34 years, with EMS in Pecos and Aerocare, their air ambulance service, in Fort Stockton. AMR currently operates in 42 states, said Wideman, and provides ground ambulance services for 40 Texas counties.

AMR is the main contractor working with the Federal Emergency Management Agency to provide ground and air ambulance services in emergency situations. Their office of emergency management is based out of Dallas, said Wideman, where 911 calls would be routed.

AMR operates a registered nurse line, which can help cut down on ambulance needs, said Wideman. Commissioner Mike Pallanez inquired whether AMR would have bilingual staff available, to which Wideman assured him the company did.

AMR also pays EMTs to go to school in order to become paramedics and prioritizes training, said Wideman. The company would strive to hire locally and would have a local medical director.

As for community involvement, AMR would host Stop the Bleed and CPR training for local citizens, would provide an ambulance for large civic events, and consider using the fire department for operations, said Wideman.

After the presentations, Vernon Tucker, a local EMT who previously worked with Alpine EMS and is now commuting to Pecos, said if a private vendor was chosen an anonymous platform operated by the county for citizens to rate services and provide feedback would be paramount.

As an EMT with 12 years of experience locally, Tucker expressed a desire to serve his local community and work with a local supervisor. Tucker encouraged the commissioners to review potential EMS providers’ Glassdoor pages, where employees leave anonymous reviews of their employment experiences.

“There are quite a few negative employee reviews for some of the services that were here today,” said Tucker. “I’m looking at that, and I’m going, that’s a nice paycheck. But is it worth the stress for me and my family?”

Hennington, who has been working closely with the county throughout the new EMS planning process, discussed a county-run EMS option. The proposed budget was based on three people on duty at all times, performing a three days on, four days off schedule. Hennington voiced concerns about acquiring new ambulances in a timely manner and said it would take the remainder of the year to get a county-run system up and running.

Hennington said if Terlingua Fire and EMS were to extend help past the original April 30 deadline, they would need staffing assistance.

Commissioner Sara Colando asked Hennington, who previously argued a public-run EMS would have the best staying power for constituents, why he seemed to now be favoring a private vendor route — Hennington clarified he would still be on board with a public option.

“I mean, if you guys decided you want to go the county route, I still like the idea, I think there’s still a romanticism to building us a really first class [service] — you get it in Terlingua, you could do it here,” said Hennington.

Colando said because they solicited proposals from companies with the understanding that the subsidies would not increase, she expressed concerns that the companies would end up saddling customers calling 911 with higher prices.

“The people who call 911 are going to be paying for this service, and –– whether their money stays in Brewster County with a public run entity or whether it goes out to an international, national or a statewide company –– what is going to get them the most bang for their buck?” said Colando.

Discussions around the selection of a provider continued at Tuesday’s regular commissioners court meeting, where officials tackled criticism of the process. Some citizens had expressed concerns regarding the transparency of the EMS task force meetings and the level of involvement on the city-level.

“I am a little bit taken back by the comments, ‘We’re having secret meetings,’ and ‘We’re conspiring.’ We’re trying to figure this thing out folks — that’s it,” said Cano.

Commissioner Jim Westermann, who represents Precinct 1, said his constituents were reaching out to inquire why the court was delaying in voting on the EMS providers and to express frustrations regarding meeting upon meeting without a decision. He expressed frustration with the process but acknowledged procedural setbacks and an unexpected recent increase in city involvement.

“The city was involved in all this. They had representatives the whole time. And so here we are, six weeks out from our self imposed deadline, and we want to revisit everything again. I have no answers for my constituents other than to say: stay tuned,” said Westermann. “But this is a rather unfortunate development right at the end.”

Judge Cano rebutted, stating majority votes were needed in both commissioners court and city council in order to approve a new EMS provider, because they each hold separate contracts with the provider.

“We are winding down versus picking up again,” said Cano. “We would like to reach a consensus as [soon] as possible.”

EMS provider proposals for AMR and City Ambulance can be found online on the City of Alpine’s website here, starting on Page 35, and Emergent’s Air’s proposal can be found here.