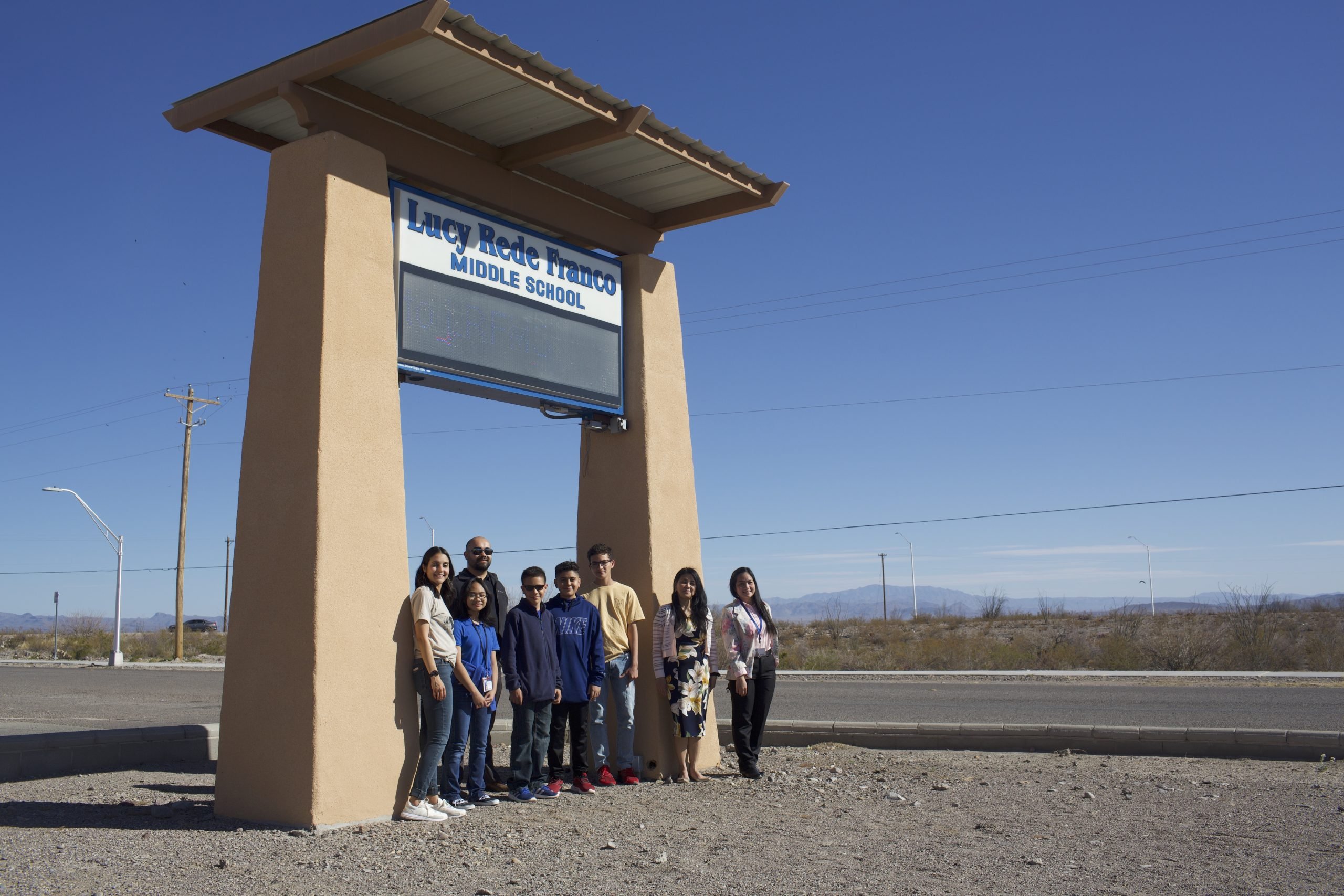 PRESIDIO — Four middle school students and their teachers are helping bring back a Presidio institution designed to get young people invested in the health of the Rio Grande River. The Presidio River Rangers will visit the Rio Grande in Big Bend Ranch State Park once a month, collecting water samples and learning about the complex ecosystems beneath the murky surface of the water.

The program was originally the brainchild of Patt Sims, a beloved Presidio High School teacher and nature lover who helped found the local chapter of the Texas Master Naturalists. Sims retired from teaching in 2010 and the program faded away not long after. Now, with a little help from Elvira Hermosillo, community liaison for the Big Bend Conservation Alliance, Presidio students will be able to learn important scientific skills in their own backyard.

“We’re going to be checking for pollution on the Rio Grande River, the river that divides the U.S. and Mexico,” Hermosillo explained at the group’s kickoff meeting. “We’ll be going to the river once a month, on Saturday, and we’ll have this really cool kit that can test for things like pH levels, conductivity and dissolved oxygen. If you don’t know what those terms are yet — we’ll be learning all of that together as we go.”

She asked the kids if anyone had ever been to the river. Though the river runs through Presidio, it’s heavily patrolled by cameras, drones and cruisers — not exactly a top destination for a relaxing afternoon with friends. A handful — though not all — of the students had been to either Big Bend Ranch or Big Bend National Park. Nobody had ever been canoeing, which the group plans to do to wrap their season of hard work.

The Presidio River Rangers will work closely with the Texas Stream Team, an initiative of the Meadows Center for Water and the Environment at Texas State University. There are 191,000 miles of waterways in Texas, and the Stream Team trains citizen scientists to monitor water quality across the state. Over 11,000 people have been trained to collect samples over the program’s 30-year history, lightening the load on state agencies like the Texas Commission on Environmental Quality and engaging everyday Texans with the intricacies of their local waterways.

There are only a handful of testing sites between El Paso and Laredo, so the River Rangers’ efforts will make a big difference in understanding the health of the Rio Grande along some of its most remote reaches, including the federally protected Wild and Scenic River stretch. The Presidio River Rangers will test from the mouth of Colorado Canyon in Big Bend Ranch State Park, about 40 miles downstream from Presidio.

“It’s one of the most beautiful drives you can do in America, maybe even in the world,” Presidio River Rangers alumna Cynthia Wright told the students of the trek down FM170 to Colorado Canyon. Wright Zoomed into the orientation to get the students excited about the program. She grew up in Presidio, and her love of hydrology sparked by the program led her to get a PhD in ecosystem science and management from Texas A&M. She’s currently a postdoctoral researcher at Oak Ridge National Lab in Tennessee.

“It was having that time outside that I really enjoyed,” she explained. “Mrs. Sims would take us to the Rio Grande, and we would perform a bunch of different water quality tests on the river. They were a little bit hard for me to understand, but over time, I started to learn how the tests were important and how they’re interesting.”

She vividly remembered the first time she put a drop of river water under a microscope: “I was just amazed that the river was alive and moving — it wasn’t just a drop of water.”

In Wright’s day, a big draw of the program was getting to miss a morning of school, but this time around, the River Rangers will have to sacrifice a Saturday morning to travel to their outdoor laboratory. The 2022 Rangers told the Presidio International that they’re not worried about getting up early — they’ve had plenty of practice leaving home at the crack of dawn for sports. “I just really want to see the river,” said seventh grader Santiago Ramirez. “I want to go outside, instead of being inside all of the time.”

Aidan Samaniego was looking forward to the chance to better explore the area. “And it’s cool that we get to help the river,” he added.

Wright ended her conversation with the kids by offering a pep talk on the value of growing up in Presidio. Her experiences at Presidio ISD led her to a career as a scientist and the opportunity to travel the world. She’s done fieldwork around the globe from Kenya to the Amazon River in South America. “I’d like to tell you to dream big — you guys are just starting out. So you can literally do anything you want. You’re living in a time where access to information is basically limitless. You have access to so many resources just by having a computer and internet connection. So I would just encourage you guys to try to figure out what it is that makes you tick and what drives you and go after it.”

“I also want to tell you guys not to sell yourself short,” she continued. “I think coming from Presidio, we tend to think that we’re at a disadvantage. But actually, you guys have a very unique background. You’re growing up in two different cultures, most likely two different languages. So that means you’re very adaptable, and you’re able to navigate cultural differences. That’s huge, especially in the context of globalization — the way the world is becoming so connected now. You guys have a huge advantage simply because of where you grew up and where you come from.”