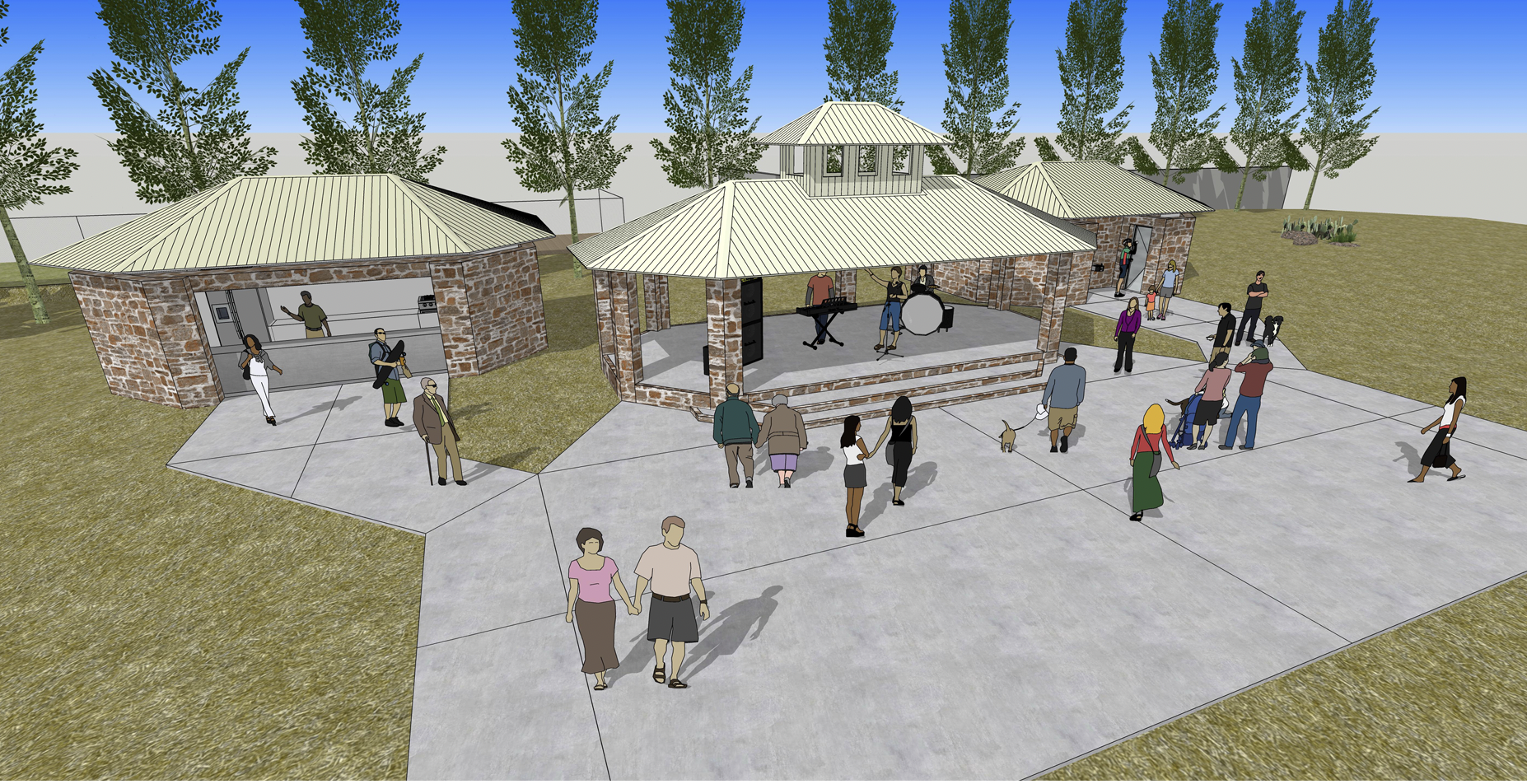 A preliminary design for two additional structures which will be built to accompany the existing Coffield Park gazebo. At a meeting hosted last week by Marfa’s Parks and Recreation Board, members of the public weighed in on two potential designs, voting unanimously for the option with separate kitchen and bathroom facilities. Architectural rendering courtesy DSGN Associates.
Subscribe

MARFA — Windswept park-goers filtered into the Marfa Activities Center gymnasium last week to shelter from the dust and voice their opinions on the Coffield Park Improvement Project’s latest design plans. Those gathered settled on a design that will see separate bathroom and kitchen structures built behind the existing gazebo.

The Marfa Parks and Recreation Board is presently looking to improve the park’s amenities while keeping in mind future larger-scale upgrades, dependent upon the MAC feasibility study, which is currently underway, and a forthcoming master plan for the park.

“We are putting the buildings behind the gazebo so that they enhance the gazebo that’s there without changing the whole view and feel of the park,” said Board President Trey Gerfers.

Robert Meckfessel, president of DSGN Associates, who lives part time in Marfa, led the presentation on two potential design schemes for gazebo additions. Both included new three-stalled restrooms for men and women, a full kitchen complete with stove, refrigerator, sink and counter, plus a storage area.

In keeping with the look of the existing stone gazebo, additional structures would be built from the same materials and include a similar pitch metal roof, said Meckfessel. The concrete plaza will also remain. Facilities will not be air conditioned but will include open air ventilation.

“They’re not going to be smelly, grungy restrooms, they are going to be very airy and open –– think like a good TxDOT restroom which you might go to,” said Meckfessel.

When put up for a vote, meeting attendees unanimously voted for the scheme that involved building separate bathroom and kitchen structures on either side of the gazebo, which would allow for the area directly behind the gazebo to remain open. The less-favored design situated the bathrooms and kitchen in the same building directly behind the gazebo. The two-structure scheme was slightly bigger and more expensive than the singular build scheme.

Marfa resident Luis Pippen brought forth the idea to further optimize the chosen design by swapping the locations of kitchen and the bathroom in order to make bathrooms closer for people utilizing the park. Resident PJ Serrano agreed, saying it would be better to have a clear vantage point from the fields and courts to the restrooms so parents could keep a close eye on their children.

Serrano also wondered whether traditional concrete paths connecting the three structures could be expanded to envelop the whole area, offering more space for chairs and tables. Meckfessel suggested decomposed granite might be a more suitable option in order to prevent runoff. Ensuring the gazebo, plaza, bathrooms and kitchen are handicap accessible is also one of the major challenges going forward, said Meckfessel.

A discussion ensued as to what location would allow for optimal handicap parking spots. The idea of a handicap parking spot near the volleyball courts would allow for a straight shot to the gazebo over flat terrain, some said. Gerfers agreed and said the final design will also include an accessible, temporary spot for cars to drop off supplies, whether it be band equipment or coolers, at the facility.

The next steps in fully realizing the designs are to obtain construction drawings, permits and hire a construction crew. Meckfessel said construction would likely take around 6 months to complete.

“This is a pretty simple job,” said Meckfessel.

Funding for the project has already been obtained, said Gerfers. But one of his major concerns is finding a construction company that could be made available sooner rather than later, he said.

“Anybody good is gonna be booked,” said Gerfers.

With many board members expressing optimism that the straightforward construction could be done in a timely manner, though the exact construction timeline is up in the air, the meeting moved toward discussing the future of the park as a whole. Gerfers said a master plan has yet to be created, and is somewhat hinging on the completion of the MAC feasibility study, which is set to be done in late April. The city and the parks board split the fee to have the feasibility study performed, Gerfers said.

Gerfers insisted meeting attendees there would have many more opportunities for public comment regarding the park’s forthcoming master plan design. One of the long-term goals of the parks board is to close West Texas Street, which runs through Coffield Park, in order to decrease traffic, adding parking instead around the park’s perimeter. The city has already approved the eventual closure, said Gerfers.

Gerfers said while it would be the most organic to be able to address the entire park as a whole, bathrooms are badly needed as well as electrical upgrades, and funding is there to fix those issues now.

“We want to do this, so we’re gonna make the gazebo amenity now. And then we’re going to fold that into whatever other design things we add — a skate park, a tennis court, there’s lots of different ideas out there,” said Gerfers.

Situated in the center of the MAC building, fields and courts, the gazebo and future accompanying amenities are essentially the heart of the park, said Meckfessel.

“This is the high point of the park, the gazebo sort of sits up there like the Acropolis, it has pretty great views in all directions,” said Meckfessel.