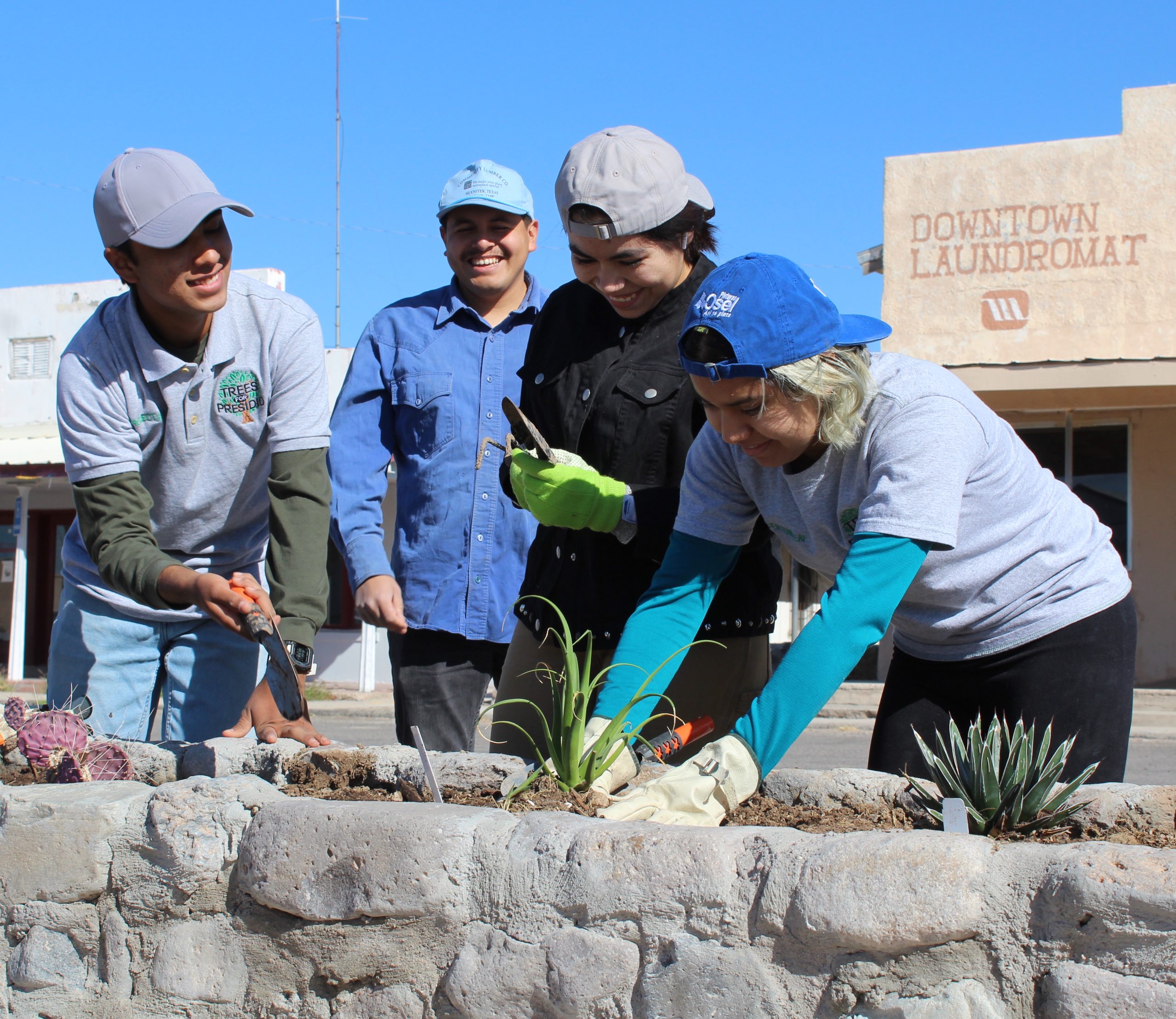 PRESIDIO — On the last Friday of their spring break, the Project Homeleaf kids once again got up early to do what they do best: bring community spirit and a little bit of green to Presidio. This week’s project concerned the rock planters on the sidewalk between the Slack building and City Hall along O’Reilly Street.

Clarissa Villagran made a hole in the dirt with her hands and skillfully unsheathed a fresh cactus from its disposable planter. Before she made the final placement, she held it up to the light to get a look at the bundle of roots underneath.

The planters were constructed last summer by the now-defunct Presidio Cultural District Association (PCDA), a nonprofit organization that used funding from the Presidio Municipal Development District (PMDD) to beautify downtown. City Hall rescinded support for the organization in August in response to controversy over the group’s mural project.

Local residents sounded the alarm, hoping to protect Presidio from gentrification and to keep Presidio-based projects Presidio-led. PMDD started fresh that fall under new leadership, and the conflict faded into the background. For months, the rock planters sat empty, gathering dust and the occasional scrape from folks accidentally backing into them with their vehicles.

“PMDD is incredibly proud of the Project Homeleaf volunteers,” new Executive Director Jeran Stephens said. “They have become shining stars in a project that had been mired in some controversy and disputes along the way. I think that the initiative and the gumption they’ve shown is something we’d like to see repeated all over the city.”

Ramon Rodriguez Aranda, a Presidio High School junior and founder of Project Homeleaf, worked with Water Works Director Cesar Leyva at City Hall to install an irrigation system for the planters. “We want to make it easy for them to maintain,” Aranda said. The solution? A three-tiered system: one bed full of plants that don’t need watering, and two beds with varying water needs so the group can monitor what works best.

“We did it as an exhibit style because it creates different scenes about diversity — like when you go to the zoo,” Aranda explained. “That way people can get a little bit of everything, a little bit of our hometown roots.”

Aranda would eventually like to put up placards for plants with special local significance. One example is candelilla, an indigenous plant that grows in clusters of pale green pipe-cleaner size stalks. Wax from the plant can be used in cosmetics and was used throughout the Big Bend as a roofing material. In the early 20th century, settlers smuggled candelilla into Mexico for profit.

Aranda has been investigating a story about an old wax factory in Presidio, where candelilla wax was turned into lipstick, candles and other products. Eventually, the factory struck a deal with Wrigley’s gum, and candelilla from Presidio became part of a product distributed nationwide. “We want to implement history because a lot of people don’t know about it,” he said.

Project Homeleaf applied for funding from PMDD, and after they were approved, Stephens took the group to Fort Davis to go cactus shopping at the Chihuahuan Desert Research Institute’s annual sale. Stephens and the kids underestimated the degree to which the CDRI plant sale is like Black Friday for north county succulent shoppers.

“We got there at 8:30 knowing the gate would open at 9. I thought we’d be the first ones there — it’s just plants, right?” Stephens said. “There were people lined up on both sides of the highway. I told the kids, ‘I’m an old lady. When the gates open, y’all get out and y’all run.’”

City Councilmember Arian Velázquez-Ornelas helped the kids design a shopping list of plants that had the best chance at survival in downtown Presidio’s glaring summer sunlight. “We were a little stressed trying to find them all,” said volunteer Adilene Porras. “This weather is crazy, and not everything can survive this type of heat.”

The group made it out with carefully-packed crates of desert plants and enjoyed touring the greenhouse to learn about the local desert ecosystem. They were especially drawn to the bright colors native to a landscape misunderstood by outsiders as drab and dusty. Villagran couldn’t remember the scientific name of her favorite plant from the greenhouse, but “it looked like something out of the Lorax [by Dr. Seuss].”

The group was also treated to a tour of Marfa’s Judd Foundation, led by Rainer Judd, Xavier McFarlin and Dallas Thundershield-Lambert. In between viewing original works by Donald Judd in his home and studio spaces, they talked about landscaping, art and getting ready for college.

For many of the kids, it was a first. “It was my first time going to Marfa, like actually hanging out there,” Porras said. “It’s amazing to meet different people. Sometimes I feel like I just live in Presidio, and I don’t pay attention to other small towns out here. But when you see each town and what they’re known for, it’s crazy.”

On their way out of town, Stephens helped purchase additional plants from Cactus Liquors, and the group headed back home to Presidio to accept a generous donation of plants from City Councilmember Trisha Runyan’s personal garden. Stephens felt the new round of plants was in the spirit of what the project was intended to do before all the turmoil at City Hall.

“The controversy last summer about how the PCDA was making their choices for contractors for artists kind of rolled into who was making the decisions about what types of plants should go in the planters,” she explained. “It had always been the goal of the program, as far as PMDD was concerned, that we would use native indigenous plants. We’re very fortunate that Arian Velázquez-Ornelas was able to contribute and educate everybody on the kind of plants we’d need.”

As the group wrapped up their work for the morning, community members drove by and honked. The kids waved back with muddy gloves and talked amongst themselves about the future of the project. After an incident where someone ran into the gate at the Recycling Center with their vehicle, which Project Homeleaf volunteers care for and staff, there was some concern that the unattended rock planters would become a free-for-all.

“It’s something we’re trying to spread awareness of,” Aranda said. “If you take the plants out, you’re harming your community. So hopefully people will just come by and appreciate.”

Stephens hopes to eventually install three benches along the path, an effort that community members can donate to with commemorative plaques. Alongside the planned exhibits, the rock planters will hopefully become a focal point for downtown — a place where locals and tourists alike can stop and smell the flowers, figuratively speaking.

“There are these misconceptions about these high school kids — all they think about is boys or girls, cars, prom, making a little money to buy beer and sneak around and drink. That’s not these kids,” said Stephens. “These kids are super focused on the future, and they’re also focused on the betterment of our community as a whole.”