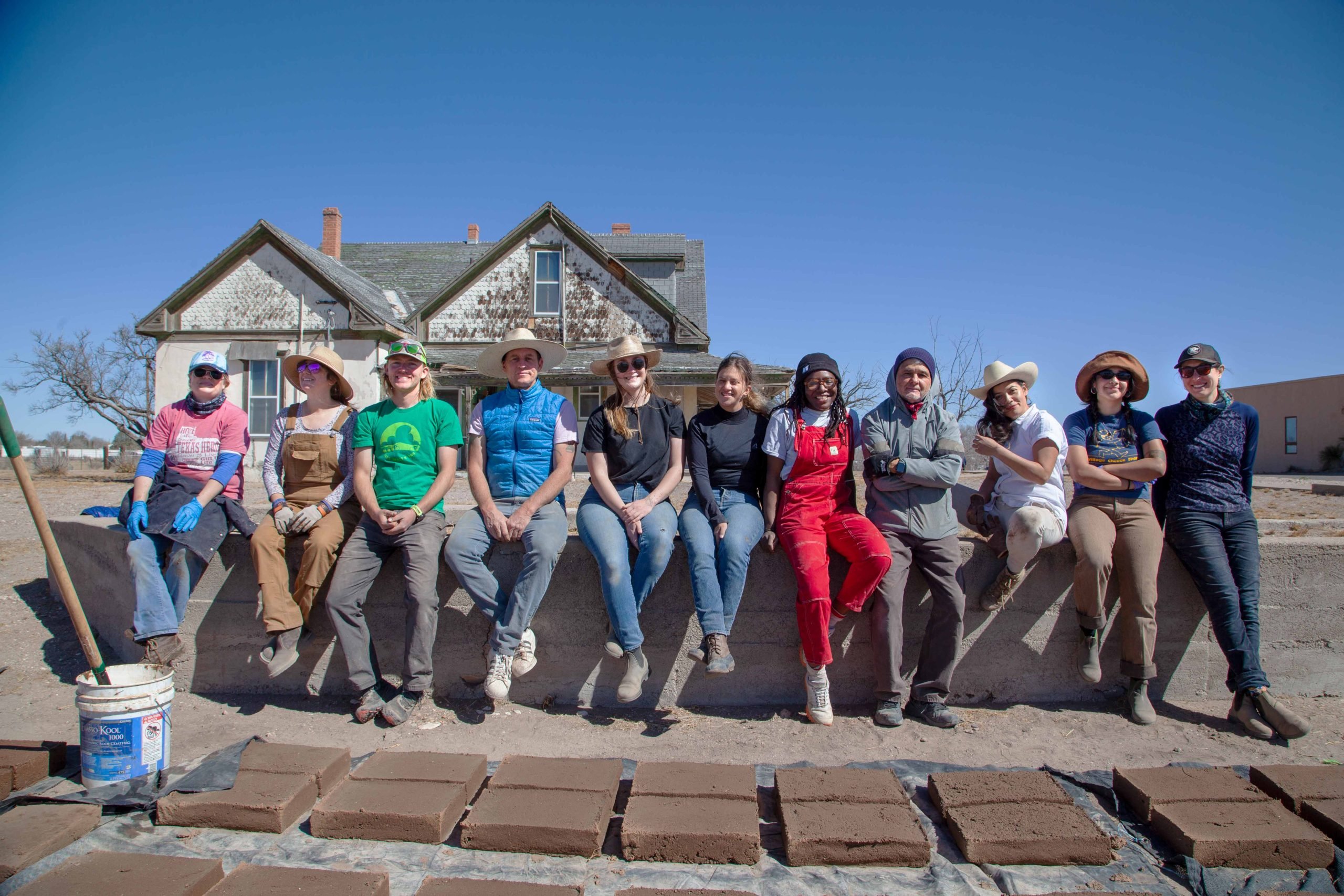 MARFA — Last Thursday, rows of neatly laid out, fresh adobe bricks dried in the West Texas sun as their creators — participants of the Chinati Foundation’s new adobe apprenticeship for tri-county women — mixed together soil, sand, sotol fiber and water in wheelbarrows and washed brick molds, working in sync to start the process over again.

The cohort, made up of women from Marfa, Alpine and Fort Davis, was starting off their fourth day in a six-week program. The previous day, the group made a total of 146 adobe bricks using traditional processes. In addition to gaining hands-on construction experience, apprentices are also attending talks hosted by adobe experts and taking field trips to area sites, like the Ruidosa Church.

Tina Rivera, a workshop participant who lives in Marfa, said she was drawn to apply to the course because of its all-women focus, having been energized by her past participation in Lumber Club Marfa, a woodworking club for girls. She said she was interested in learning how to build her own home out of sustainable materials and how to preserve Marfa’s history.

“The cultural erasure — I don’t want to see that happening,” said Rivera.

Another apprentice, Jackie Zazueta, a ceramicist who also lives in Marfa, said the opportunity to get outside and work with her hands was appealing after mostly working from home during the pandemic. She, too, was drawn to adobe’s rich history, and said she wants to go on to incorporate the skills she is learning even after the workshop ends.

“I don’t want to just do this for six weeks and stop thinking about it,” she said. “I want to continue talking about it, working with adobe and with future restoration stuff — and then also incorporate it into my own art practice at home.”

The steady flow of the worksite, an open area near Chinati Foundation’s Young House, was aided by the apprenticeship’s leaders: adobe practitioners Joey Benton, of custom design and fabrication studio SILLA, and Elizabeth Farrell and Zeke Raney, both of local architecture firm MUDLAB.

Raney said in this early phase of the program they are focusing on giving participants a feel for what it is like to work with the materials and are taking the time to dispel some of the myths about adobe. While the instructors have plans to introduce a mixer later on, they first opted to go fully manual to facilitate an intimate build site. 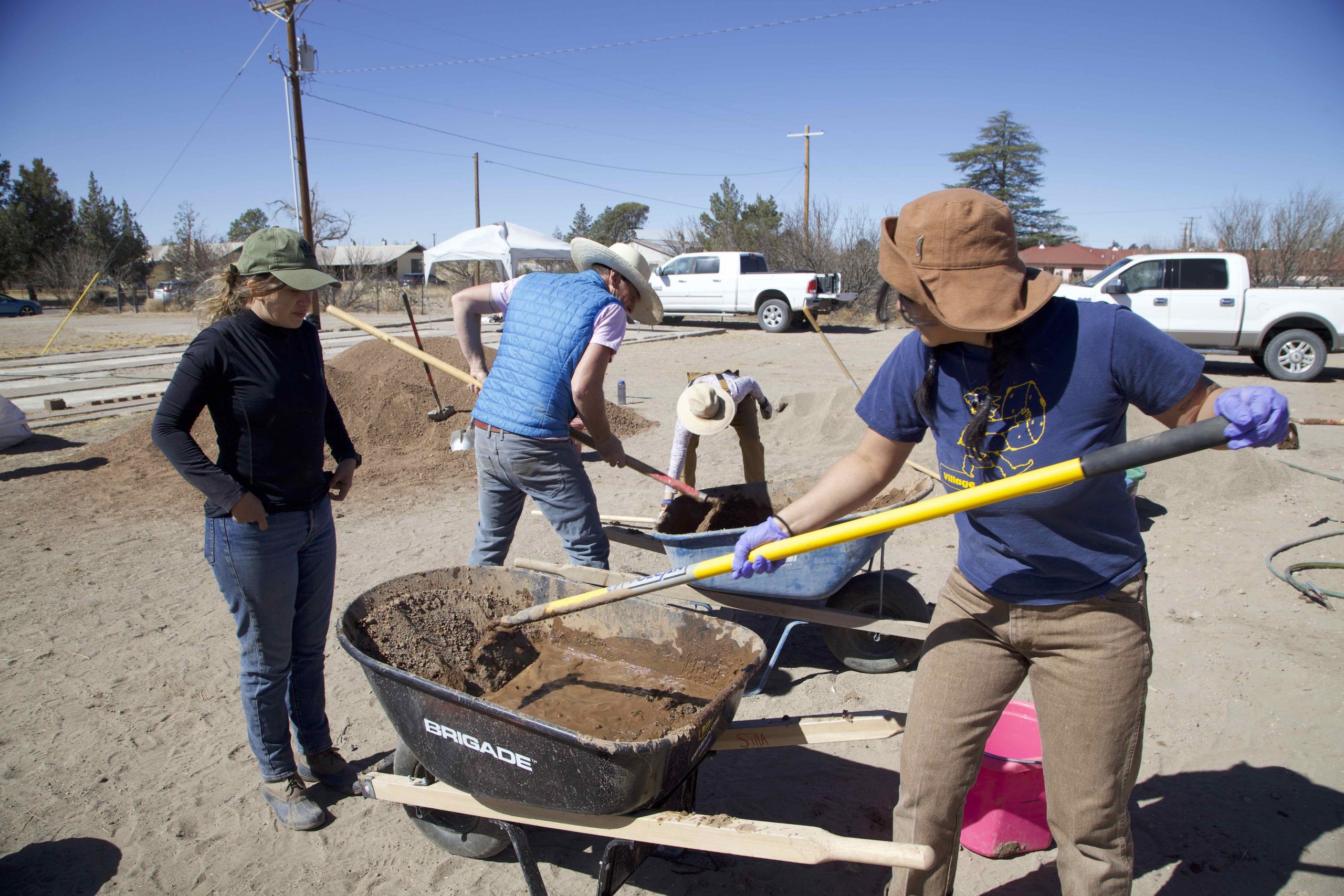 Adobe apprentice Jackie Zazueta mixes together ingredients which will be used to form adobe bricks. Photo by Mary Cantrell.

“You just wash everything off with water, there are no chemicals, no machines. This is all by hand. There are a lot of different ways you can bring machinery into it. But we decided first let’s start it quiet, let’s converse, let’s take it easy,” said Raney.

Farrell said the science of adobe can be simple or infinitely complex, depending on the level of detail involved, but the six-week course focuses on developing the practical skill set needed to build basic adobe structures.

“It’s not like when you take a woodshop class then you realize you don’t have a woodshop. Everybody can have a shovel, a wheelbarrow, sand and dirt. I think it is something that once you’ve taken this workshop, you could go off and feel confident doing yourself,” said Farrell.

She said it was exciting to hear the participants already brainstorming ways to use their newfound knowledge of the material in their artistic practices and more.

“People are already thinking about, ‘How am I going to apply this to my life and what I do?’” said Farrell.

Jenny Moore, director of the Chinati Foundation, said the adobe apprenticeship’s genesis came out of a desire to turn a straightforward restoration project into a training program that would involve the community. The apprentices will help with repairs to the distinct Judd adobe wall at the John Chamberlin building — the museum recently announced an April 30 reopening of the newly-restored structure. Architectural preservation was outlined in Chinati’s 2017 Master Plan as one of the museum’s primary goals, said Moore.

The foundation wanted to offer the program to women, not only to bring more of them into a traditionally male-dominated field, said Moore, but because women were harder hit by unemployment during the pandemic. Apprentices they hired all share an interest in the sustainability of adobe structures and want to learn how to construct and maintain them, said Moore. Moore involved Benton and MUDLAB, who came up with the program’s curriculum, to spearhead the course because of their knowledge of the area’s adobes.

“They were really interested in spreading this knowledge and skill — not being proprietary about it, but really sharing it as widely as possible, because each one of these folks as apprentices then could develop their own crews and then tackle their own projects,” said Moore. “There’s a lot of opportunity out here for this field.”

The program is being funded by a $1,250,000 grant Chinati received from #StartSmall, Square and Twitter CEO Jack Dorsey’s public fund for pandemic relief. Four apprentices are being paid an hourly wage to participate in the program, and a few others — including two representatives from the museum’s conservation department — are volunteering their time. In addition to performing on-site repair work of Judd’s adobe wall at the Chamberlin building, apprentices are also going to use the Young House as a case study for adobe home repair, building a test wall and covering it with earthen plaster.

Many apprentices remarked they were feeling more competent after just the first few days of the program and mentioned they hope the apprenticeship can become a regular occurrence rather than just a one-off. 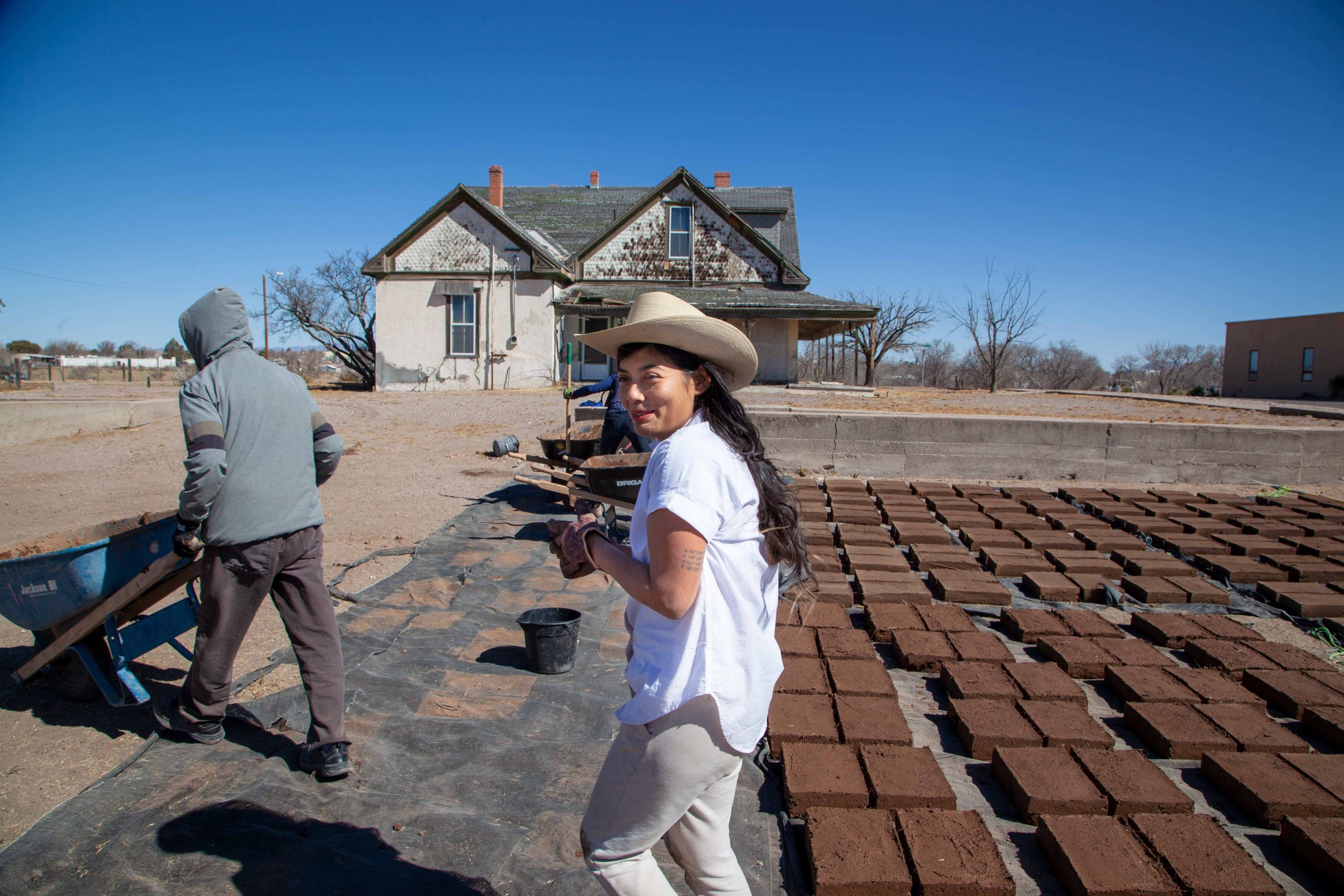 Tina Rivera, Marfa resident, participating in a six-week adobe apprenticeship program at the Chinati Foundation. Rivera was at work forming fresh adobe bricks with fellow apprentices at a job site near the museum’s Young House. Photo by Mary Cantrell.

Benton, who recently completed adobe restoration projects of the Alvino and Dorgan houses in Big Bend National Park as well as Balmorhea State Park’s motor court and frequently partners with MUDLAB on similar undertakings, said the program is designed to give the women a little bit of everything as far as the field of adobe is concerned.

“At the end of six weeks they will have knowledge of materials, construction, restoration, preservation and structure. So we’re trying to kind of get all of that into this one little six week moment,” said Benton.

More than a third of Marfa’s buildings are adobe structures, said Benton, and by passing down these skills of how to build and repair adobe to the next generation, they will be able to be better stewards of the town’s architectural heritage, which is already being lost to demolition of old adobe buildings.

“There’s a real need for people [to be knowledgeable about adobe] in this community. We don’t have the people to take the next generation — we don’t have a place to hand this off to,” said Benton.

Because the tradition of adobe was mostly passed down through oral history, he said, it is important to bring back the practice and instill the concept of adobe as a viable building material into the community. By teaching people how adobe works, they can hopefully perpetuate its existence, he said.