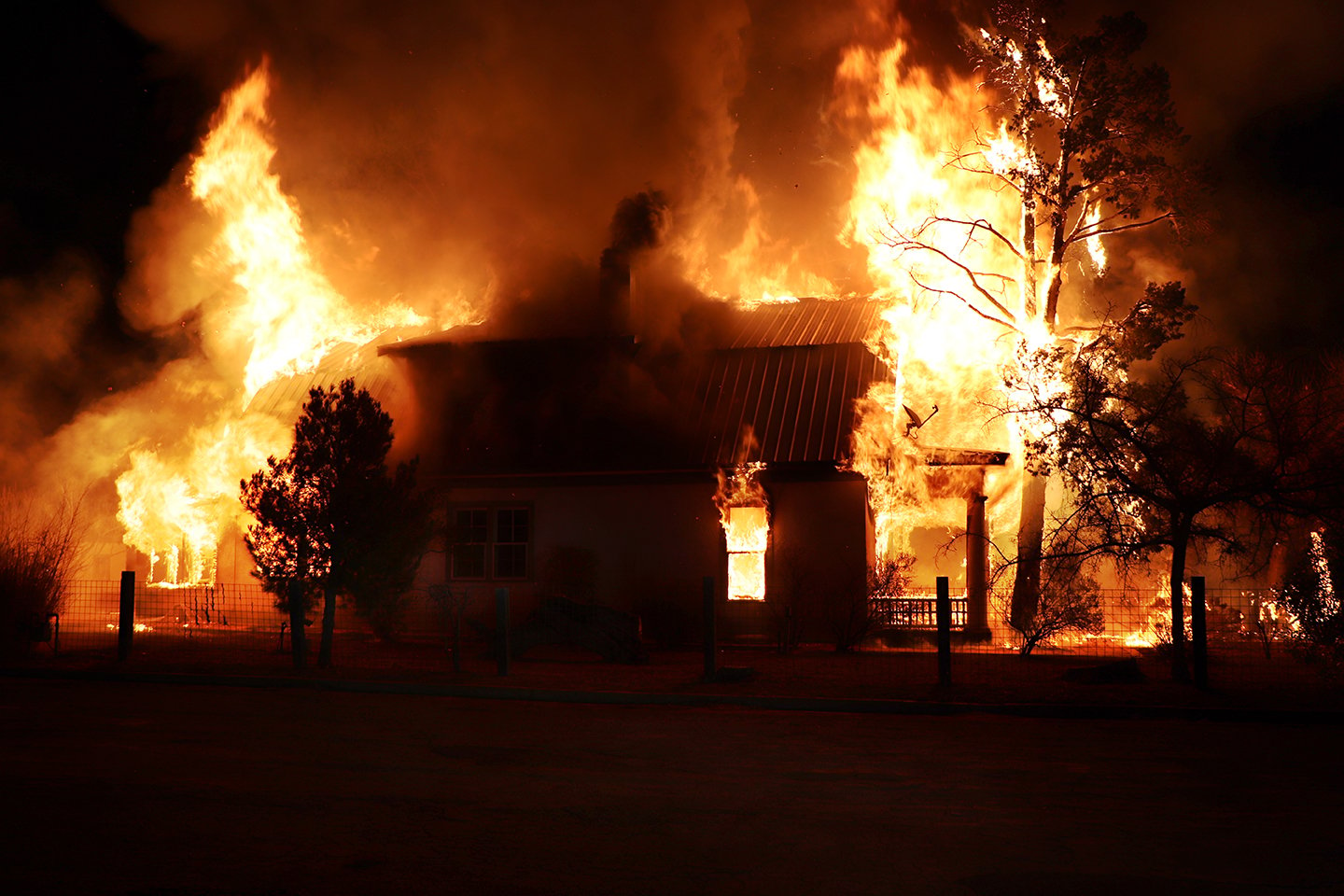 A residential fire broke out early Saturday morning on the corner of Nevill and Columbia Streets in Marfa. A family of three was in the home at the time but were able to escape. The house was destroyed. / Photo by Humberto Hernandez
Subscribe

MARFA — A fire broke out in the early morning hours on Saturday at a Columbia Street residence, home to two adults and a small child, largely reducing the structure to a pile of debris. All occupants were evacuated safely, and the Marfa Volunteer Fire Department was able to subdue the flames. The cause of the fire is still under investigation.

First responders who happened to be near the structure leapt into action around 5 a.m., when screams for help could be heard coming from 401 E. Columbia Street, near North Nevill Street. Presidio County Sheriff Danny Dominguez, who lives nearby, was outside barbecuing with his son-in-law when he heard the screams and ran to help.

“We heard screams, and I told my son-in-law, it sounded like a lady screaming in distress, so we better go look,” said Dominguez.

When Dominguez and his son-in-law arrived on the scene, a woman and a small child were already outside, he said — he asked her if anyone else was still inside, and she said her husband was on the top floor.

They raced to help the man, who was trapped on the second floor of the building and “trying to gasp for air,” said Dominguez. “He said, ‘I’m ok.’ I said, ‘No, you’re not.’” The first responders grabbed a ladder and helped the man climb down to safety, said Dominguez.

The man was treated by EMS for smoke inhalation, but was not transported to a hospital, according to Marfa Police Chief Steve Marquez.

Humberto Hernandez, a retired Border Patrol agent, had already arrived to assist in the rescue — he also happened to live nearby, and heard the screams for help. “I was just being a caring neighbor,” he said.

By the time the fire department arrived, shortly thereafter, the house was engulfed in flames. The department quickly got to work and had the fire under control within an hour and a half, said Marfa Fire Chief Gary Mitschke, but there was no saving the building. “When we got on the scene, it was already gone,” he said. 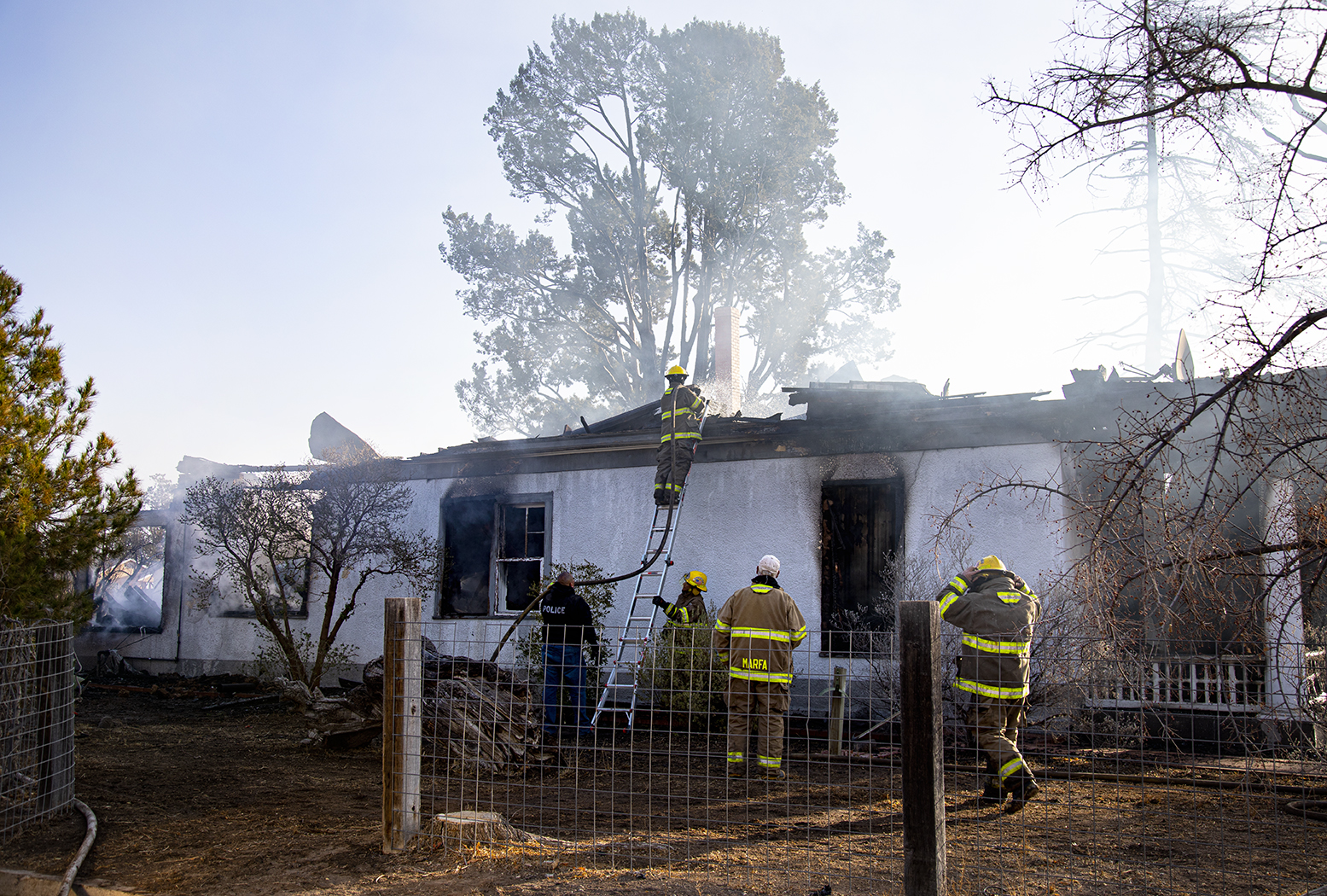 Firefighters from the Marfa Volunteer Fire Department at the scene of a house fire on Saturday morning. / Photo by Maisie Crow

According to property records, the house was owned by the late artist Donald Judd, who purchased the property in 1990.

There were heavy flames on both the north and south sides of the structure, said Mitschke. “We went in a defensive mode trying to keep anything around the structure from catching fire, which we did for the most part,” he said. Thankfully, the house is isolated enough that the fire was prevented from spreading to other homes, he said.

The second floor collapsed onto the ground floor, said Mitschke, trapping “seats of fire” underneath. Though the flames are under control, the department will remain on scene to cool those hot spots.

“It’s a lot like the Judd building fire — when you have that much debris come down, you can’t reach it with water, so you just let it cool,” he said.

Mitschke said that while the department has a rough idea of where in the house the fire started, the amount of debris and the condition of the structure make it difficult to pinpoint a cause.

This is a developing story. The Sentinel will provide more information as it becomes available.