Chamberlain Building to re-open this weekend 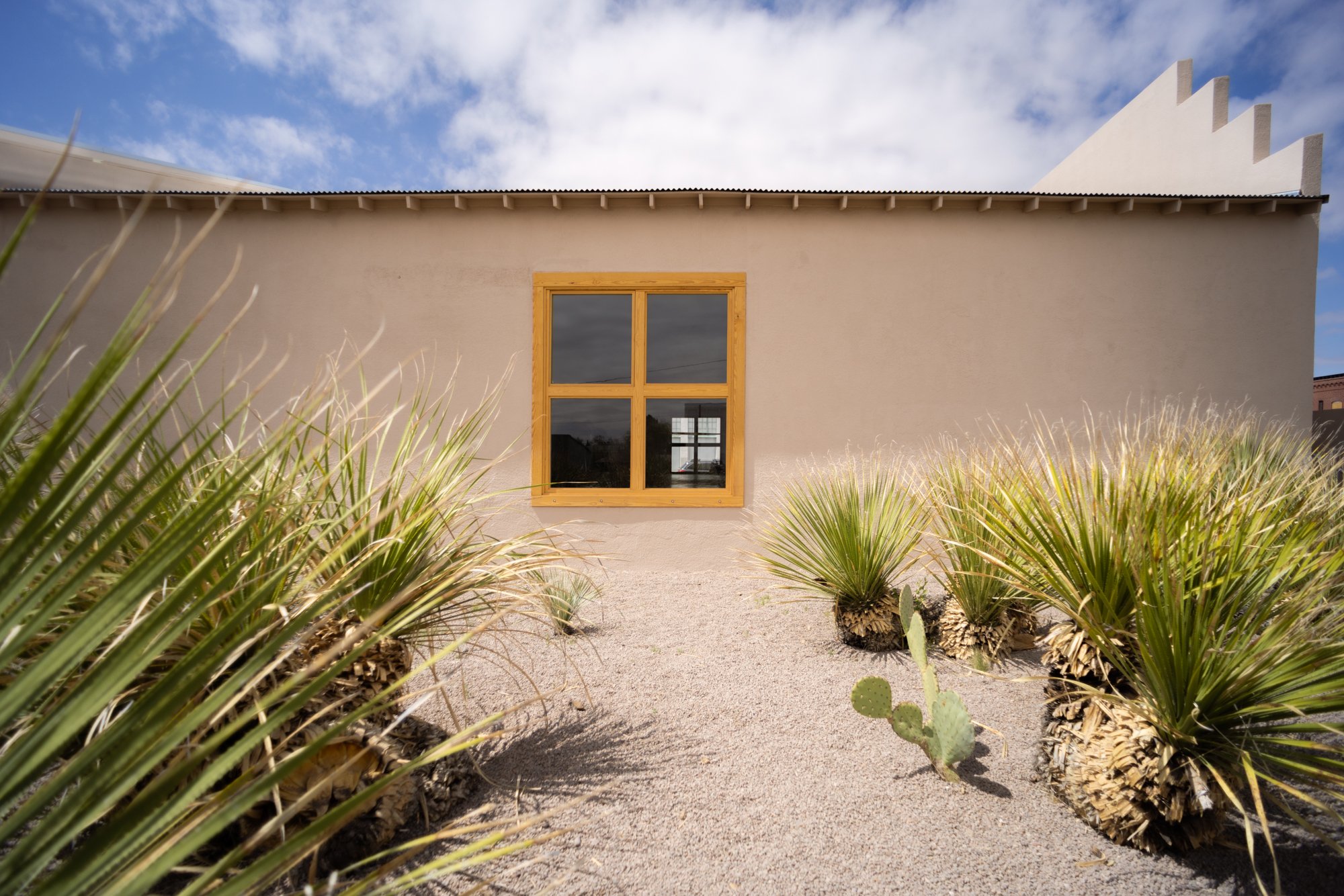 By Alex Marks. Courtesy of the Chinati Foundation.
Subscribe

MARFA — For the past year, the Chinati Foundation’s John Chamberlain Building has been closed to visitors while undergoing an extensive restoration spanning not just the structure but the land around it — finally, on Saturday, the restored building will open its doors to the public amidst a day-long celebration of the project’s completion.

Locals and visitors to Marfa alike will flock to Highland Avenue for a free open viewing of the building beginning at 10 a.m. and lasting until 5 p.m., with a chance to dive deeper into both the building’s history and fresh renovation. Chinati Curator Ingrid Schaffner will host a talk on artist John Chamberlain and his work in Marfa at the Crowley Theater at 11 a.m., then at 3 p.m., at the Chamberlain building itself, Chinati Director Jenny Moore will moderate a discussion with project architect Troy Schaum, landscape designer Jim Martinez, and adobe preservationist Joey Benton.

Beginning at 5:30 p.m., community members will be treated to the welcome sight of Highland Avenue closed to all traffic and filled with tables for a free dinner, catered by Walter Burke Catering out of Santa Fe and accompanied by music from Alpine-based band The Swifts. The dinner is a revived tradition generally associated with the foundation’s Chinati Weekend in the fall, which this weekend will coincide with the unveiling of a long-awaited triumph for the foundation, for downtown Marfa, and for the art world.

The building closed at the beginning of 2021, and so the construction has successfully ridden out both an earlier, pre-vaccine period of the pandemic and a more recent omicron wave, with all the uncertainty that has entailed. “Thankfully, with no small amount of relief, we are on track,” said Moore. “We’re really looking forward to a celebration, to be able to have completed that project despite the challenges of the pandemic and the supply chain crisis, to be able to do it on time and on budget.” Through it all, the worksite never had to close, said Moore, allowing the foundation to stay on schedule.

On Saturday, locals and art-lovers familiar with the Chamberlain will enter a changed structure, but they will hardly be hit in the face with the transformation — the work is more subtle than that, noted Moore, so as to be noticeable but not dramatic. “When you walk into the building it shouldn’t be obvious,” said Moore. “It shouldn’t feel different, but it should feel like a great improvement on that space, really bringing it back up to the ideal level that both Judd and Chamberlain wanted it to be experienced in.”

The foundation and the architects overseeing the project were up against the elements of the desert, working to repair weathering and reinforce the structure to better preserve it for the coming decades. The roof has been structurally reinforced to better cope with high winds in the region, said architect Troy Schaum of Schaum/Shieh, which oversaw the project; the roofing, meanwhile, has been completely replaced. And where part of the southwest corner of the building had been sinking into the ground and in need of reinforcement, architects underpinned it with a new foundation.

Then there are the Judd-designed quarter-panel doors and windows lining the space, the top left square of which pivots open — that feature had been structurally degraded over the decades, but Schaum said the team was able to recuperate it by reinforcing the wood with steel. “The struggle with that has been the kind of weathering of the wood and the way the wood ages,” said Schaum. “So a lot of the work was not operable, but we were able to introduce some steel detailing — some steel that’s encased in the wood that lets it perform better in that environment.”

Moore said restoring those details allows a fuller realization of Judd’s intentions for the building. “Those may feel like small things, but they’re kind of revelatory in terms of demonstrating Judd’s ideas about the space,” she said. “None of our buildings are climate controlled in conventional art industry ways, but to get air circulation through the building that way, to have those windows open and hear birds outside, is kind of beautiful.”

Adding to the aesthetic upgrades, architects installed new skylights to shed fresh light onto the artwork housed in the space, said Schaum.

The foundation has also done work to make the space more accessible to all visitors — architects installed ADA-compliant ramps at the entry, plus ramps leading into the Judd-designed courtyard. The bathrooms are also now ADA-accessible, said Schaum.

“Making the building fully ADA accessible was incredibly important for us,” said Moore. “ Each one of our restoration plans, as we achieve those, it’s very important that the buildings be fully compliant with code and accessible to everyone.” That includes access to the exterior courtyard, of course, but Moore noted that space had not been accessible to anyone for some time because the pivot door leading into it had structurally failed — now the doors and windows have been repaired and their functions reinstated. All of these improvements allow for the recuperation of the courtyard — bounded by the adobe wall, which has been repaired with help from the women of the foundation’s adobe apprenticeship — as “a really beautiful, intentional space that’s a part of the experience of that art and building,” said Moore. “To be able to reclaim that and make it fully accessible for everyone is a really exciting moment.”

The sotol garden has also been treated with renovations, including replanting the plants that had been lost and giving a trim to others, and replacing gravel. The building has also received a fresh coat of paint, which Moore expects will be challenged by the Far West Texas elements, but this time the foundation has a full maintenance plan in place for the future.

This is all in keeping with the foundation’s Master Plan — a multi-year, multi-project plan launched in 2017 aimed at the conservation of art and buildings, the restoration of the land, and improvements to the visitor experience. Now, the foundation’s conservations goals have been further aided by a recent development that has coincided with the Chamberlain Building’s return — the designation of a historic district in the center of Marfa, which includes the Chamberlain Building. The nomination of the Central Marfa Historic District to be granted an official designation within the National Register of Historic Places won unanimous approval from the State Board of Review in January; in recent days, the Texas Historical Commission announced that the district had been added to the register.

The Chinati Foundation and the Judd Foundation together revived efforts in 2019 to garner the historical designation, after initial efforts launched by the city in the mid-2000s had lost steam; ultimately, the boundaries of the district were re-drawn to include Judd properties outside the downtown core.

The 23,000-square-foot Chamberlain Building was originally constructed in 1940 as three separate warehouses, then was transformed by Donald Judd into one large space — Judd built the four-panel windows and doors with pivots, planted and designed the grids of sotol plants around the property, and added the courtyard bound by the adobe wall. The building, with Judd’s adaptations, stands out as one of the late artist’s major architectural projects. The building houses John Chamberlain’s 24 large-scale sculptures, made of painted and chromium-plated steel, which the foundation has also worked to conserve –– it is the largest installation of Chamberlain’s work in the world.

Saturday’s visitors will get to experience the space in a new way, with Judd’s additions revived by careful restoration work, the space flooded in natural light from skylights overhead and filled with fresh air from the newly-recuperated windows. Moore said that trustees and longtime friends of Marfa are expected to fly in for the celebration; additionally, the town is booked with weddings this weekend, so Moore hopes some of those out-of-towners decide to pop over. “I think it’s going to be a really interesting mix of folks coming specifically for [the event] — whether locally or farther afield — and then folks who are curious that something really exciting is happening down on Highland Avenue and maybe they want to come check it out,” she said.