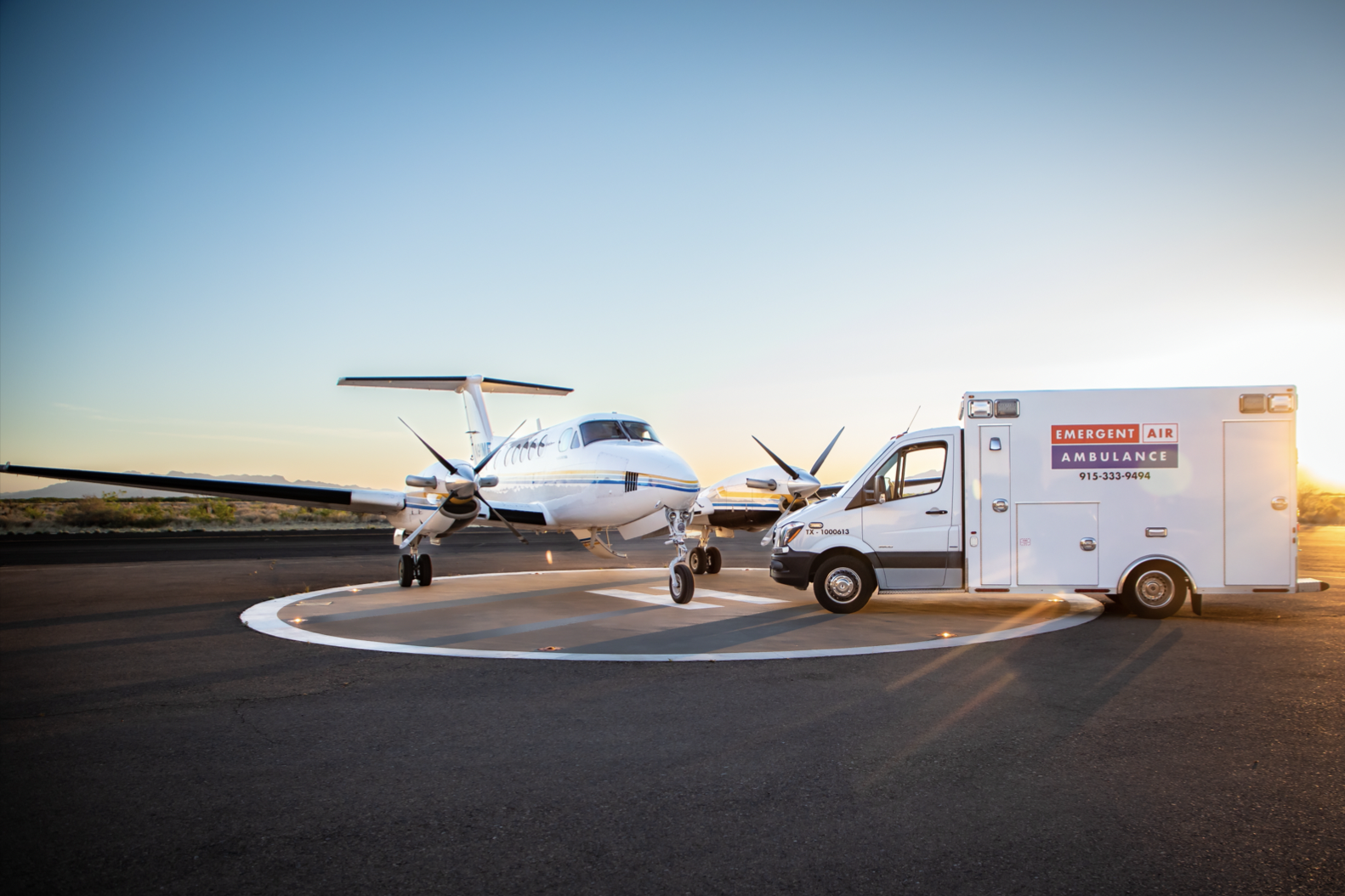 Emergent Air is set to officially take over 911 calls for North Brewster County this Sunday, May 1. Photo courtesy of Emergent Air.
Subscribe

BREWSTER COUNTY — Brewster County officials and the Alpine City Council voted in separate meetings Tuesday to approve an EMS services contract with company Emergent Air, which was recently selected by both governing bodies to take over 911 services for North Brewster County.

The decision comes just in time as Emergent Air will officially take over 911 calls for the area this Sunday, May 1. In an interview with The Big Bend Sentinel, an Emergent Air representative shared that they have obtained the necessary personnel, vehicles and equipment to take up the service as planned.

City and county officials have been working since December 2021 to secure a new EMS provider after the sudden passing of Alpine EMS Director and Fire Chief Michael Scudder. Weighing the option of a private contractor versus a county-run service, officials ultimately opted to partner with El Paso-based company Emergent Air in mid-March, giving the company a little over a month to establish staff, ambulances, supplies and equipment for an Alpine-based EMS operation.

In a comissioner’s court meeting on Tuesday, Judge Eleazar Cano said in ramping up services Emergent Air was spending a considerable amount of money on equipment, inducing new ambulances, and seemed determined to get off on the right foot.

“I think their commitment to their charge is pretty high. They want to make sure that they have what they need,” said Cano.

Walter Kuykendall, program manager for Emergent Air, who is getting the company up and running in Alpine, called in to the meeting. Terlingua Fire and EMS Chief Greg Hennington, whose service stepped in to provide 911 coverage for North Brewster County while officials searched for a replacement, said they were in productive discussions with Emergent Air and he was optimistic about the transition.

“We’re excited to have these guys here. We’re already talking about how we can work together in South County,” said Hennington.

The contract’s terms were designed to provide flexibility for the county and city as well as Emergent Air in the case the agreement isn’t suitable to any party. Under the contract, Emergent Air will serve a two-year initial term, followed by three subsequent one-year extensions. The contract can be terminated by any party with 120 days notice.

In an interview with The Big Bend Sentinel, Kuykendall, who is currently serving as Emergent Air’s Alpine manager while the company seeks out a more permanent EMS director for the newly-established service, said they also intend to honor the contract by regularly appearing at commissioner’s court and city council meetings.

Primarily an emergency aeromedical transportation service, Emergent Air was founded in 2020 by Lee King. This is its first ground transport 911 contract, but the company’s leaders, including Kuykendall and King, who are both paramedics, have previously served in a 911 ground service capacity. A company they previously worked for ran 911 calls for Deming and Carlsbad, New Mexico.

Kuykendall said he thinks because they are local, out of El Paso, and added personal touches to their presentations to the commissioner’s court and city council, they were able to win the EMS services contract.

“I don’t think anybody else, any of the other companies, had their owners here,” said Kuykendall. “And it helped that we know rural EMS. That’s what we came up doing.”

Kuykendall has been busy hosting orientations and onboarding Emergent Air’s new employees. He said the company is looking to hire 10 to 12 people full time, and currently has eight people hired — half of whom are Brewster County locals. Medics will perform 48 hour shifts, said Kuykendall. He said so far he’s been attracting candidates by word of mouth and has been successful recruiting, but now that the contract is finalized he’ll broaden their search.

“Whenever we were doing our presentations, we said we were trying to make our pay competitive, very competitive for the local market, which includes El Paso,” said Kuykendall. “That’s what we’ve done, so that had the effect we hoped it would.”

In addition to offering competitive pay, Kuykendall said because the North Brewster County area experiences lower call volumes than that of a heavily developed area, it can be a suitable place for nearby medics to pick up extra shifts, which some of their El Paso employees tend to do, acting as support staff while the service gets up and running.

“It’s worth the three hour drive to come work down here,” said Kuykendall. “Here’s a pretty good place to come and learn 911 calls and get experience.”

For now, Emergent Air will utilize three Alpine EMS ambulances it purchased from Schudder’s estate, which it will have remounted. The company also intends to phase in two to three newly-purchased, used ambulances specifically for the Alpine service. It has also ordered a brand new ambulance, but it may take around a year to arrive.

“The used ambulances we have are lower mileage and have already been gone through by the mechanics, they’re great ambulances for this location,” said Kuykendall.

For now, while Emergent Air awaits new logo designs, the ambulances will appear the same as the old “Alpine EMS” ambulances. The new logo will likely appear as “Brewster County EMS, operated by Emergent Air,” said Kuykendall in the commissioner’s court meeting.

Emergent Air will lease space at the Alpine Volunteer Fire Department for $1,000 a month and continue to use their preexisting office and sleeping quarters located at the Alpine-Casparis Municipal Airport. Equipment and medications will also be stored at the airport. Kuykendall said he’s hoping to have staff housing secured by June 1, but in the meantime will likely host staff at an Airbnb.

Emergent Air benefits from a preexisting relationship with Big Bend Regional Medical Center, performing air transfers for the hospital, which it plans to continue to do, said Kuykendall.

The contract stipulates money the county receives from the Texas “J” Regional Advisory Council (JRAC), a local trauma system network, will be deposited into a special account for public education and training of Brewster County medics — although Emergent Air can request to utilize JRAC funds directly for EMS, if needed. Their long term goal is to partner with other entities in order to build up the local workforce, said Kuykendall.

After much back-and-forth with the commissioner’s court and an EMS taskforce, the city and county cited a lack of funding and time as the major factors contributing to their decision to go with a private company over a county-run ambulance service. But a regional EMS solution for the tri-county area has been widely discussed, which Kuykendall said they would get behind, should it eventually come to fruition.

He said since his time in Alpine setting up the new service, he’s had conversations with a variety of stakeholders and Emergent Air has felt the support of the community at large.

“So far, everybody’s been great. Everybody supported us from the word ‘go.’ It’s been a pleasant experience here,” said Kuykendall. “The employees have all been nice and very open to some of the changes we’re going to bring.”

emergent air EMS
Stay in touch with The Sentinel
Related