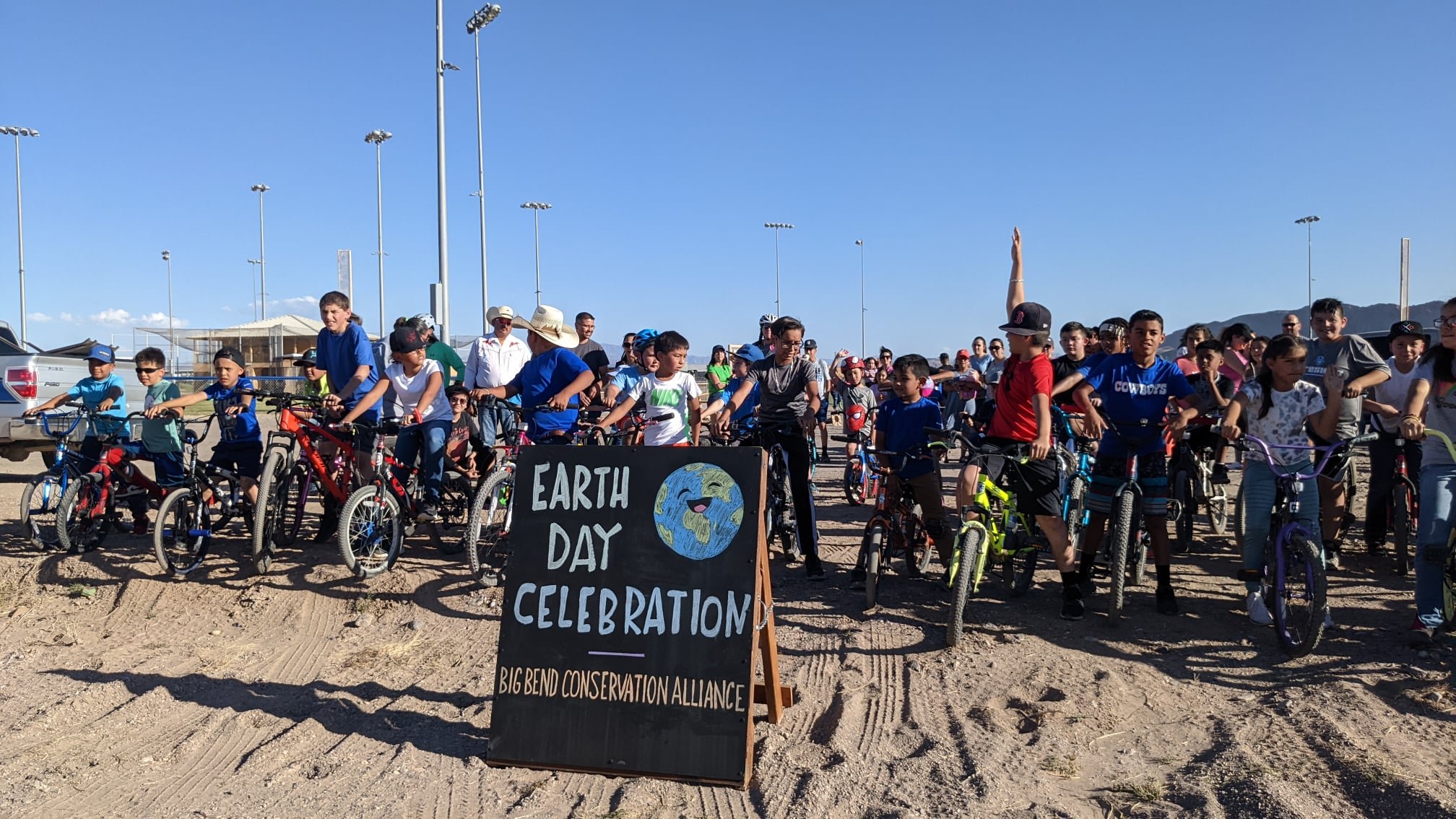 PRESIDIO — Last week, Presidio residents celebrated Earth Day with a pair of events that brought people together to learn eco-friendly habits with family and good food. On Thursday, the elementary school crowd turned out in huge numbers for the Earth Day bike races, hosted by the Big Bend Conservation Alliance, and on Friday, folks gathered in the PAC and over Zoom to learn about climate change and ecology from guest speakers.

On Thursday, the Big Bend Conservation Alliance hosted a full evening of events for the younger crowd, kicking off with “Burritos for Boxes,” where local families were invited to trade their recycling for coupons for free burritos at the Bean.

Elvira Hermosillo, Presidio’s community liaison for the Big Bend Conservation Alliance, kick-started the city’s recycling program a decade ago. She got local youth excited about recycling with fun events and even negotiated a deal with the school to use a district cardboard baler for a municipal recycling center.

The recycling center came under fire last fall, and Project Homeleaf, a youth-led environmental organization made up of students who learned about recycling as first graders from Hermosillo, struck up a deal with the city to keep it alive. With almost a decade of work put into teaching Presidio residents about recycling, seeing so many families drop off their cardboard, plastic and aluminum last Thursday was emotional for Hermosillo.

“We gave out all 48 coupons we printed,” she said. “I had to turn people away because it was after 6 and we had to get to the next event. But I was so happy and excited — I kept telling people to come back.”

Hermosillo’s strategy has always been teaching young people good environmental habits in the hopes that they’ll pass the message along to their parents. “A lot of people were there because their kids told them to take them. So a lot of them were surprised to find out that they can bring detergent bottles and shampoo bottles, all kinds of plastics and paper envelopes, magazines, boxes. People just need to be educated.”

After the recycling center closed its gates, the festivities moved over to the Little League fields, where a huge crowd assembled for the bike races. The organizers separated the kids by age group and gave out medals for the winners of each race held on the blocked-off street between the PAC and the pool.

Elvis Medina, director of Parks and Recreation for the City of Presidio, was Hermosillo’s right hand man in setting up the event in a way that was safe and enjoyable for all. “I gave her some ideas about how to set up the cones for the races, what baseball fields to use, how the sun sets, where the most shade is,” he said. “That’s all part of my line of work so I was just trying to help out. It was a great project.”

The American Legion served up hot dogs and lemonade, and the Presidio ISD Police Department made a huge batch of popcorn to share with the crowd. The Presidio Police Department was also on the scene to help block off the street. Roxy Cabello performed bilingual hits before the evening was capped off with a sprinkler party.

“That was my favorite part,” said Hermosillo. “Thanks to the city, they allowed us to turn on the sprinklers in the biggest baseball field for 15 minutes. There were kids of all ages — I saw high school kids playing in the water. Everyone was running around and having a good time.”

On Friday evening, locals were invited to join the youth organizers of Project Homeleaf for a series of guest speakers as part of Presidio’s first climate summit. Scientists from around the country Zoomed into the event for talks, alongside presentations by local organizations like Project Homeleaf and Big Bend Conservation Alliance.

Dr. Alex Mayer, a professor of civil engineering at El Paso, joined the summit virtually to present on climate change and the Rio Grande. The research Mayer presented on Friday night forecasts the potential impacts of climate change on the upper basin of the Rio Grande — the part of the river that runs from Colorado to El Paso.

The Rio Grande doesn’t always flow between El Paso and Presidio, but Mayer believes that his work still holds valuable insight. He has been working to study snowmelt in the upper Rio Grande Basin — unlike rivers in some more temperate areas that are fed by precipitation along their route, the Rio Grande is fed almost exclusively by yearly snow melts from the mountains in central New Mexico and Colorado. The Rio Conchos, which feeds into the lower Rio Grande between Presidio and Ojinaga, is also a desert river originating at high elevations.

“If we were to have to live on the amount of water in El Paso and Juárez and Las Cruces, we wouldn’t be able to make it. We’re reliant on that snowpack water, and that’s relevant because these basins are more vulnerable to climate change,” he explained. “It’s not so much about getting less precipitation overall — snow is melting earlier. There’s less snow and more rain.”

Warmer temperatures and earlier snow melts have an amplifying effect on pre-existing patterns of climate change. Snow is reflective, meaning that sunlight bounces off of snowy surfaces. Bare ground absorbs sunlight. “When the snow melts, you start to have exposed ground. That exposed ground is darker than the snow. The sun will warm up that bare ground much more quickly than if there was snow there.”

Mayer stressed the importance of getting people out to see and enjoy the river. UTEP administers the Rio Bosque Wetlands Park, a “slice of the historical Rio Grande” that helps to educate people about what a healthy river could look like.

“I don’t know if you’ve been to El Paso, but we experience the river primarily as a concrete ditch. Our experience with the river is this very kind of industrialized looking thing,” he explained. “I think bringing people to places where they can experience what the river looked like before European settlement is important to let people imagine what the ecosystem can look like.”

Mayer found the experience of participating in Project Homeleaf’s climate summit “humbling.” “I was really excited to hear the enthusiasm of the organization that ran the event,” he said. “Those young people in Presidio can shoot for the stars and not just have to listen to what adults are saying — ‘This is the way it is and get used to it.’”