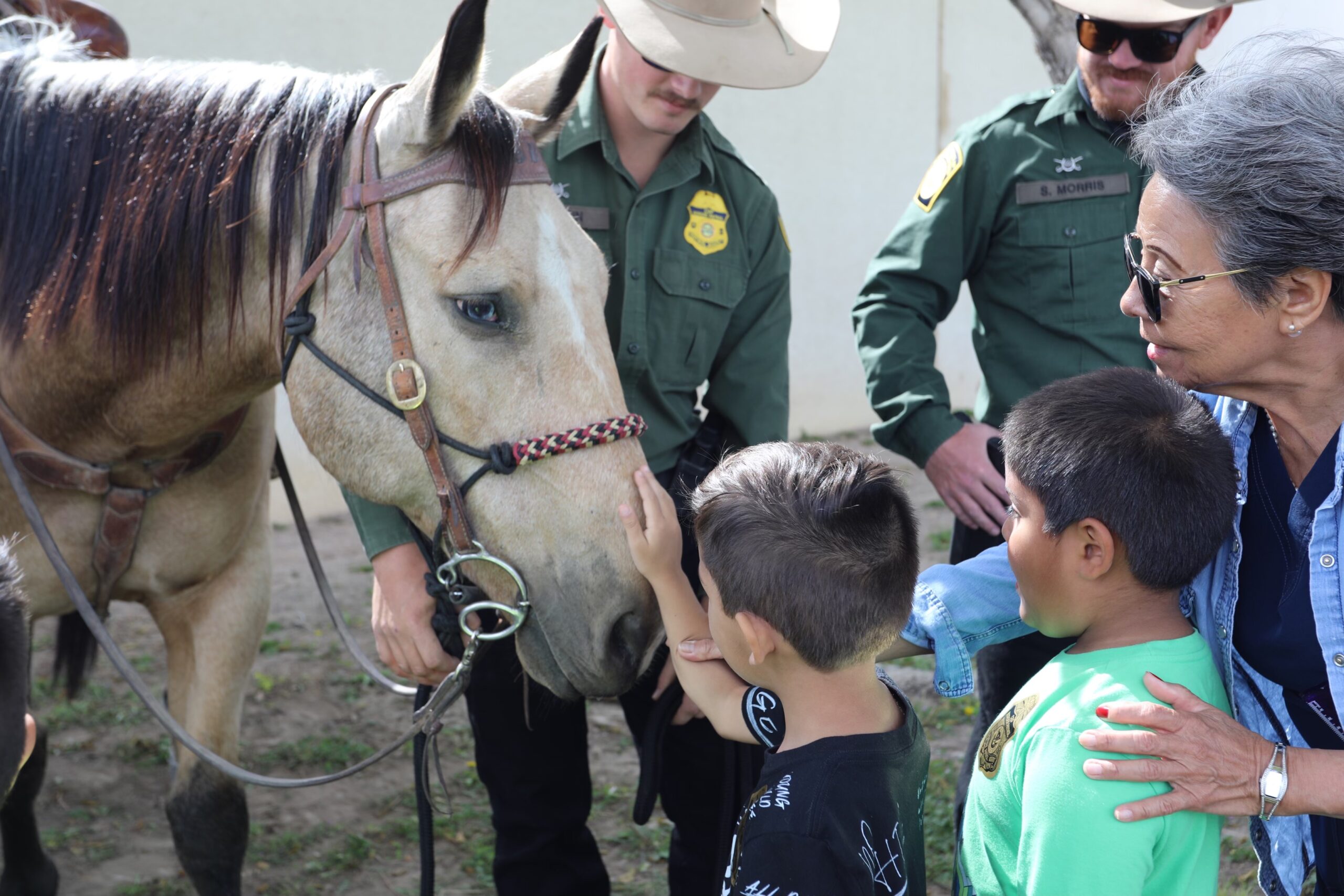 Border Patrol, as well as sister organizations Air and Marine Operations and the Office of Field Operations, set up various booths outdoors and showcased tools of the trade. Students from Marfa, Valentine, Presidio and Van Horn independent school districts viewed everything from high tech vehicles and devices — including a new mobile surveillance system mounted onto a truck, rescue beacons, a helicopter and all-terrain vehicles (ATVs) — to more old school methods, including mustangs handled by mounted Border Patrol agents and dogs with the canine program.

“A lot of these kids don’t get to see exactly what it is we do. We can’t take them out [in the field], obviously, because of the dangers of the job, so we open up the sector so they can come by,” said Sergio Nava, acting special operations supervisor with the Big Bend Sector.

The sector’s large garage was opened up and many vehicles were parked outside, doors ajar. The sound of sirens was ever present at the event, with kids pressing the buttons setting the sounds off in the patrol vehicles and speaking through vehicles’ loudspeakers.

Janet Enriquez, Marfa Elementary School teacher, whose class was being guided to various stations by a Border Patrol staff person, said her students were happy to have the opportunity to get out of the classroom, and particularly enjoy the hot dog lunch and canine demonstrations every year.

“I think they’re getting something out of this. A lot of their families work here, so they get to see what their parents are doing. And this is a big part of the community, and a big part of Marfa,” said Enriquez, who has attended the open house in years prior. 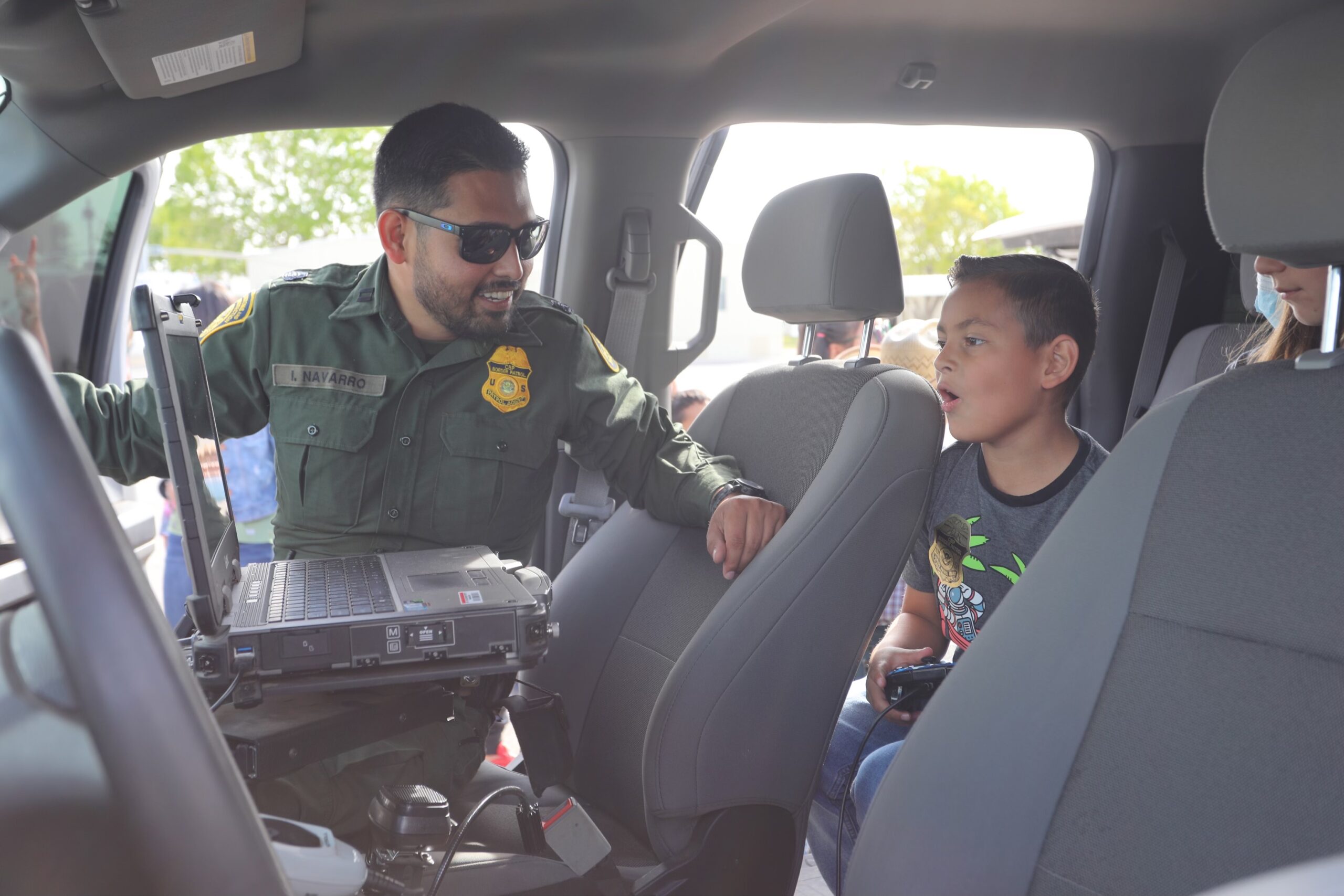 The event is, in part, aimed at the recruitment of students who will one day enter the workforce. A recruiting booth passed out fliers and Border Patrol merchandise. Border Patrol agents who are also certified emergency medical technicians (EMTs) were present to discuss their roles. On display was also a new mobile video surveillance system, in which an adjustable, up to 27-foot high mobile camera and laser range finder operated by an Xbox controller, are mounted onto the back of a truck, allowing for agents to scan areas in a multi-mile radius. Rescue beacons the agency launched last year, which act as alert systems for undocumented migrants in distress, accompanied the mobile surveillence systems.

Border Patrol Sector Chief Sean McGoffin said the agency is currently operating nine beacons and working on establishing more, but it could be a complex process, involving proper cell signal, intelligence information about undocumented migrant paths, and the cooperation of private landowners.

With the level of migrant crossings continuously rising and the possible suspension of Title 42 — Texas Attorney General Ken Paxton recently filed a lawsuit against the repeal — many state Republican leaders have expressed concerns over adequate staffing levels across Border Patrol sectors on the Southwest border. In regards to the Big Bend Sector’s staffing levels, McGoffin said he could use more staff, but that is almost always the case.

“All of us are busy working, doing our jobs, doing the best we can. We utilize the resources that we have. We’re getting more technology, we’re getting more things to help us with our mission,” said McGoffin. “The reality is we have to deal with what we’ve got.”

President Biden recently proposed a budget that would allocate $15.3 billion to U.S. Customs and Border Protection –– of which Border Patrol is a part –– and $8.1 billion to ICE, amounting to a roughly 13 percent increase in funding for both immigration enforcement agencies. The budget includes $19 million for border fencing and infrastructure. On the state level, Gov. Abbott’s Operation Lone Star costs $2 billion per year to deploy around 10,000 National Guard troops to the border, and Abbott’s office recently allocated an additional $495.3 million for the program. 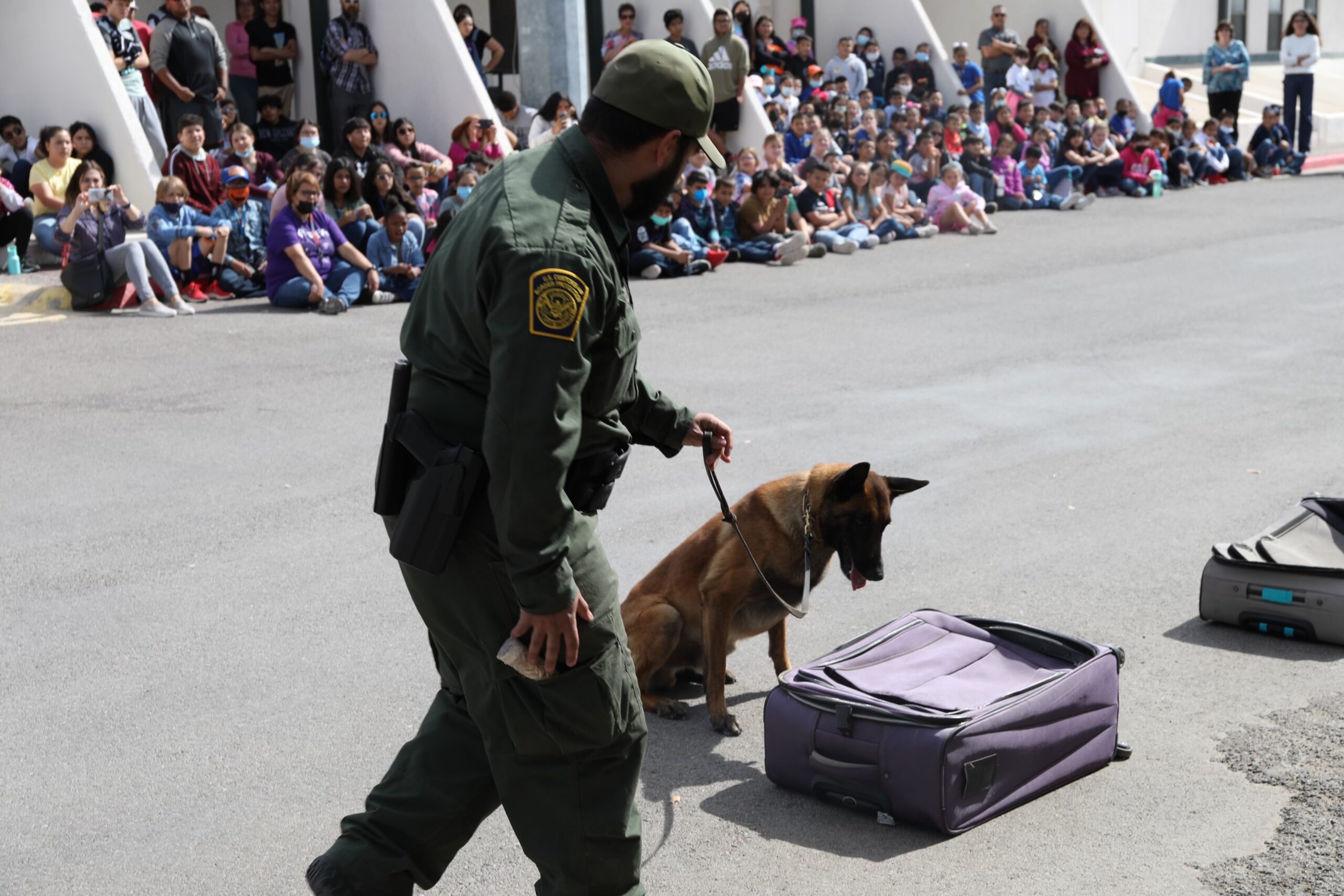 Special Operations Supervisor and Canine Coordinator William Perez, who was hosting program demonstrations showcasing the dogs’ abilities to detect humans and narcotics, has been working with dogs since 2003 and worked his way up to his current role after training others at the Border Patrol Academy. He was educating students and the public about the dogs’ performances at Border Patrol checkpoints. He said lately they have been working on expanding the capabilities of their canines to better help with locating migrants and missing people.

“We’ve been training our canines on tracking and trailing capabilities. These dogs actually have the ability to follow the ground disturbances, whatever it is, it could be rocks. The scent actually gets impregnated into the ground and they have that ability to track that scent,” said Perez.

For Perez, the open house also acts as an opportunity to educate the community’s youth about the dangers of drugs transported across the southern border. According to CBP data, drug seizures peaked in 2020 and have seen a significant decrease this year to-date, compared to last year.

“I mean, we are there to facilitate, help and make things harder for those narcotics that come into our country and corrupt or damage our youngest,” said Perez.