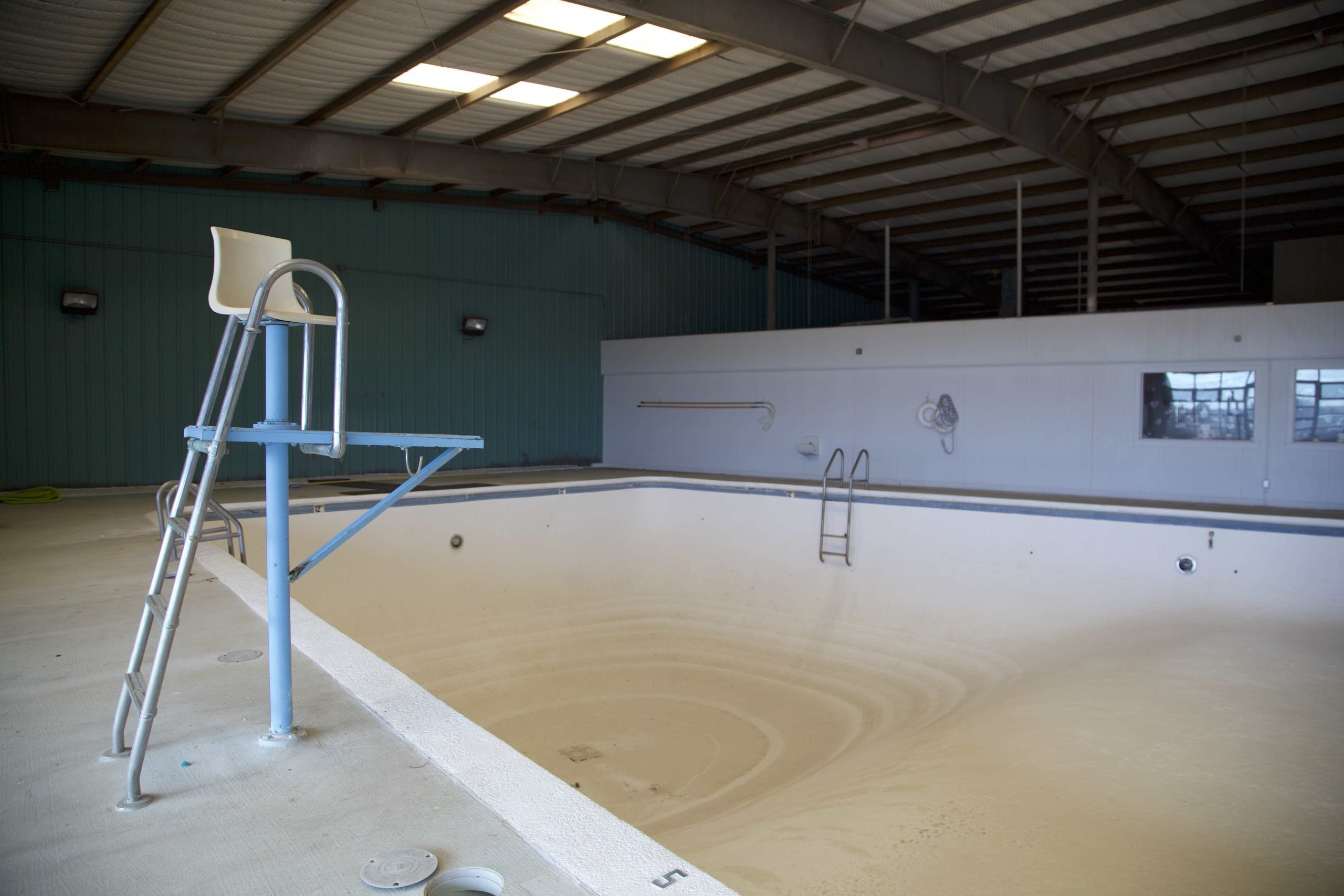 The pool at the Marfa Activities Center, which has been closed since the start of the pandemic. The city is seeking feedback via a public survey regarding the future of the pool. Photo by Mary Cantrell.
Subscribe

PRESIDIO COUNTY — As daily temperatures creep toward 100 degrees, tri-county residents are counting down the days until the opening of their local pools. The following is a round-up of the latest pool news, with some suggestions for out-of-county waterholes worth a day trip.

At a Presidio Municipal Development District (PMDD) meeting held on April 20, Presidio Parks and Recreation Director Elvis Medina, stopped by to ask for financial assistance ahead of the upcoming pool season. PMDD members had discussed publicizing and prioritizing the pool at prior meetings in order to potentially draw tourism — board member and business owner Patrick Manian, who runs a bakery across the street from the pool, reported fielding numerous questions from tourists about when the facility would open.

Medina reported that Workforce Solutions out of El Paso had, in previous years, contributed $8-10 thousand  toward wages for lifeguards, but had just announced that they would be cutting that funding. Medina currently has a workforce of 10 certified lifeguards who are paid around $56 a shift for their services.

As the city has struggled to stay on a positive financial trajectory, city officials have had to approach each expenditure with a ruthless eye. “When you really look at it, the services that the city provides through the general fund are all running at a loss,” said Financial Specialist Malynda Richardson. “They’re all cost centers, they’re not something that the city is making money off of.”

“I don’t necessarily think we ought to be making a profit on the community swimming pool, but boy, there’s got to be a way to get closer,” said PMDD Executive Director Jeran Stephens.

The board discussed a number of options to increase revenue and offset costs: charging tourists higher admission prices, expanding the menu at the snack bar, adjusting hours. Brenda Witty, a retired Presidio ISD educator and a frequent patron of the pool’s morning lap swim, made the case that investing in the pool was a worthy project for the city, even if it had to operate at a loss.

“People who come in from somewhere else to Presidio — school personnel, Customs — often they end up leaving because there’s nothing for their kids,” Witty said. “I think in order for us to build a thriving municipality, we have to offer things in the way of recreation and amusement.”

The board eventually voted to table a donation to the pool until Medina could gather more information from potential grants and state programs that could offer assistance, but planned to chip in for the pool down the line. At Monday night’s city council meeting, council voted to set the rates and hours of operation for this year’s pool season.

Kids 12 and under will be charged $2 for admission, and adult tickets cost $3. Season passes can be purchased for individuals for $80, $100 for couples, and family passes for $120. The entire facility can be rented out for special events starting at $250 with a refundable cleaning fee of $50.

Medina hopes that the pool will be able to have its grand opening for the season on May 20. “Things could change, but that’s what we’re shooting for right now,” he said.

Last Thursday’s Marfa City Council meeting was mostly dominated by discussion of the fate of the aging Marfa Activities Center pool, which has been the subject of a feasibility study and public discussion around whether to repair it or replace it altogether.

At the end of Thursday’s meeting, at which a representative for the company conducting the study presented its findings, council voted to set a special meeting and workshop for June 15 at 6 p.m. in the MAC building, where the community can weigh in before plans are finalized.

The current pool is riddled with cracks, and leaks approximately one inch of water per day, while the facility enclosing it has been corroded by perpetual exposure to the chlorinated water, said George Deines of aquatic design, planning and operations company Counsilman-Hunsaker at the start of his presentation. But the question of how best to tackle those problems comes with a set of “complexities,” said Deines — the pool facility shares space with the Nutrition Center and thrift store, so any extensive overhaul raises the question of what to do with those facilities.

A community survey, which had 188 respondents, indicated a preference for an indoor, recreational pool that would be open year-round, equipped with lap lanes, a children’s area, a waterslide and a diving board.

Deines laid out several options for how to proceed, ranging from an estimated $1.04 million-$1.4 million in cost up into the $4.4 million-$4.5 million range, depending in part on whether the pool would be indoor or outdoor and what kinds of amenities it would include. The cheapest option would be to simply renovate the existing pool while keeping the current structure around it — in this case, Deines recommended a dehumidification system to help dispel chlorinated air. At a slightly higher cost, a new pool could be built inside the existing structure, in the existing pool’s footprint.

Finally, Deines presented the possibility of re-doing the entire MAC site, which would include an aquatics center, nutrition center, office spaces, locker rooms, restrooms and a gym.

Mayor Manny Baeza ultimately advocated that the council “leave everything on the table” moving into the June workshop, rather than winnowing the options down, but it was clear that a reconsideration of the entire facility would be up for discussion.

Trey Gerfers, Parks and Recreation Board president, was also enthusiastic about reimagining the MAC, and argued that with an attractive enough plan, the necessary funding could be secured. “If the whole site can be reimagined, maybe the next step is you figure out what you do with the site, then you hire a designer to come up with options for what the whole site would be like after integrating all the input from the public, and then you figure out how to integrate the park better, and then if you have a really sexy plan, then you do a capital campaign,” said Gerfers.

In the meantime, the existing pool is slated to open on May 31 and stay open until August 6.

In addition to the public pool, Marfa residents will have another option this summer: Arlene Acosta of the Thunderbird Hotel announced last week on Facebook that the iconic Marfa hotel would be opening its pool to the public for a small daily entry fee.

In previous years, the Hotel Saint George pool hosted a family night for local kids, but ended the practice during the pandemic due to liability and safety concerns. Marfa residents looking to catch some sun can now head to the Thunderbird, where snacks and sodas will be served poolside, and adult beverages can be purchased across the street at the hotel’s lounge.

Admission for the public to the Thunderbird pool will be $5 for children and $10 for adults. Children under 15 years of age must be accompanied by an adult. Outside food and drink is not allowed, and guests must be careful to keep glass bottles 5 feet from the edge of the pool.

City Secretary Geo Calderon said that the City of Alpine hopes to open the municipal pool, just down the road from Kokernot Field, in time for Memorial Day weekend. Admission to the pool will be $3 for adults and $2 for children. Season passes are available for $85 for families up to five members and $105 for families over five members. The facility can be rented out for private parties for $80 with a $30 deposit.

The city doesn’t yet have an end date for the season. “It just depends,” Calderon says. “If we have the staffing and it doesn’t start raining, we’ll continue to keep it open.”

North Brewster County swimmers also typically have the option of visiting the Sul Ross pool, the region’s only true lap swimming pool. That may not be the case this summer — Branden Lewis, a Sul Ross freshman who works at the gym’s front desk, explained that the recreation department was facing staffing shortages. “We need another lifeguard,” he said. Lewis wasn’t sure when the public could expect an update on a reopening date for the pool.

After years of sporadic construction and closures, Balmorhea is set to be open all summer long. The state’s largest spring-fed pool is a bona fide road trip destination — with a maximum depth of 25 feet and a natural bottom home to catfish, turtles and an endangered species of salamanders, it’s a unique place that draws scuba divers and snorkelers in addition to swimmers and high divers.

In recent years, the pool has implemented an online reservation system to help manage the crowds. “It’s been really busy, we’ve sold out the past three weekends,” said Edith Peña of Balmorhea State Park. “We’re seeing more people coming out earlier in the season.”

Passes can be purchased online through Reserve America for two daily slots: 8 a.m. to 3 p.m. and 3 p.m. to 7:30 p.m. If all passes for a specific day sell out online, the park will not accept walk-ups.

The park’s campground and RV sites are currently closed for renovation, and won’t reopen until the end of the season.