Artist Renluka Maharaj gives a talk at RULE Gallery in Marfa. RULE was one of several local galleries to host exhibitions in tandem with the Marfa Invitational, which took place last weekend. Photo by Mary Cantrell.
Subscribe

MARFA — The third annual Marfa Invitational Art Fair took place this past weekend, bringing galleries in from around the world to showcase artist’s work. While visitors holding $700 VIP passes flocked to town for the weekend’s desert-set cocktail soirées and cultural performances, local arts organizations stepped up to provide accessible spaces for art viewing and appreciation for event VIPs and locals alike.

Christopher Blay, chief curator of the Houston Museum of African American Culture, who was attending the Marfa Invitational for the first time this year, said the highlights for him were ultimately the local art shows coinciding with the Marfa Invitational. Exhibitions at RULE Gallery, Jeff Marfa, Marfa Open and a neon sign installation on Blue Mountain in Fort Davis by Alicia Eggert were among the most notable. He said Marfa Open’s group exhibition, Forbidden Boundaries, which dealt with regional issues along the border was particularly well done.

“Adjacent shows were worth seeing and worth going back to,” said Blay.

Those local spaces coexisted with a wealth of out-of-town attractions for Marfa Invitational attendees. Saint George Hall, the hub of the Marfa Invitational, hosted a total of 11 booths featuring gallerists and artists from around the world. Event attendees sported canvas totes with “Marfa Invitational” printed in a sans serif font.

The Valley, a gallery based out of Taos, New Mexico, was exhibiting for the first time at the Marfa Invitational. Established in 2020, The Valley focuses on craft practices, mysticism, connection to place, natural materials and self-taught artists. They were exhibiting all-new work, a total of 32 paintings, by one of two artists they represent, Fernanda Mello. 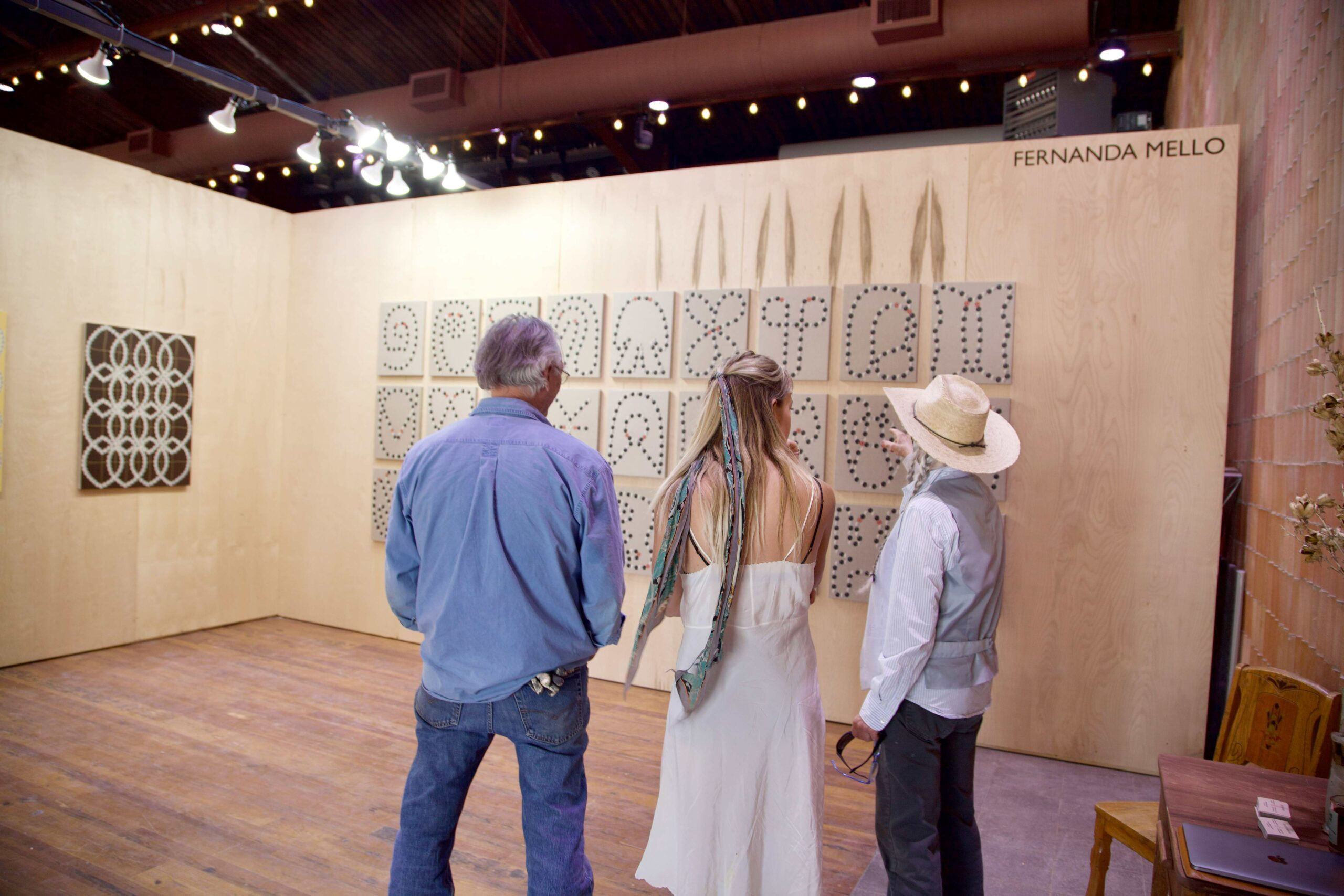 Mello, a self-taught artist who is originally from the Amazon region of Brazil, is now living and working in New York. The Valley’s booth held two series of works by Mello, one series of 27 paintings titled Image Skin, and five additional works titled Earth Constellations. Mello’s work often deals with folklore, personal memories and ancestral narratives through painting, sculpture and more.

Image Skin, a series of acrylic paintings on linen, were inspired by shamanistic healing practices by which spirits of the natural world are invoked through song and dance. The artist personifies the spirits by creating various patterns of black and white beads, along with two red beads that appear as eyes. Through playing with shape and pattern, the artist allows for many unique iterations of the spirits. The works are part of a continuous series of which the artist has done over 200 sketches.

The other works on view, titled Earth Constellations, related to shamanism, the Yanomami people of the Brazilian Amazon, and a prophecy which states that when the last shaman dies the sky will fall. Mello’s paintings involve a series of connected beads that are meant to act as a net, holding up the sky and symbolizing the continuation of indigenous practices and land stewardship.

Celeste Miles, gallery manager for The Valley, said Marfa Invitational offered a smaller, intimate art fair compared to the Dallas Art Fair, where they exhibited weeks prior. The focus on singular artists at each gallerist’s booth was also refreshing, she said.

The Valley is looking to bring different voices into the world of contemporary art, said Miles, and their booth set up signifies, in a sense, what they are trying to achieve with their gallery.

“We focus a lot on curation and creating a space where people feel comfortable. That’s why we have a candle, flowers and our desk from home,” said Miles. “We want to bring a little bit of Taos to other places we go.”

Baldwin Gallery, based in Aspen, was showcasing the all-new work of artist Austin Eddy. Along with a number of paintings by Eddy — all of which sold before the fair opened, as the gallery has seen a recent increase in demand for his work, according to a gallery representative — were six cast bronze, bird-like abstract sculptures. A 40-page catalog on the sculptures sat atop a pedestal for fair-goers perusal.

Baldwin Gallery primarily represents established, contemporary, mid-career artists and does not typically attend art fairs. Eddy was asked by Marfa Invitational founder Michael Phelan to join the fair at a previous visit to the artist’s Brooklyn studio, so Eddy worked with his gallery to make it happen.

“It seemed like a great opportunity to show the work in a really unique place,” said Eddy.

The bronze sculptures will next travel to the Le Consortium Museum in Dijon, France. Eddy, who years ago attended a wedding in Marfa, said it was nice to be back in Far West Texas, and he especially enjoyed the newly-reopened Chinati Foundation John Chamberlain Building and wandering around the area.

“Beyond just the art, the landscape is so beautiful. It’s such a nice experience because you can [participate in invitational-led events] but you can also escape that by going out into the desert and seeing something else,” said Eddy. 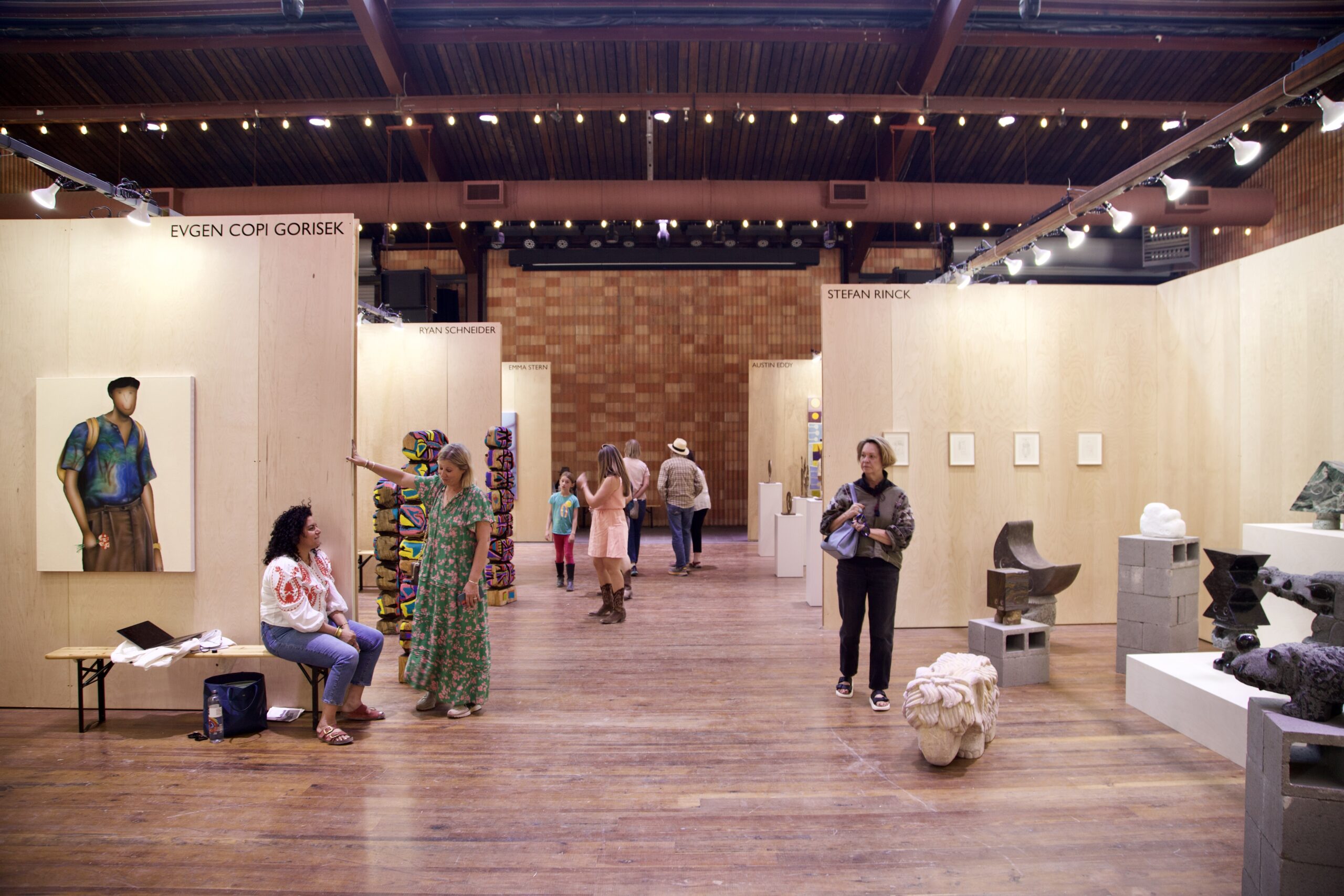 Saint George Hall in downtown Marfa hosted the 2022 Marfa Invitational Art Fair this past weekend, where a small number of galleries sold works by singular artists. Photo by Mary Cantrell.

Dedie Taylor, a Fort Davis resident, wife of the late Lonn Taylor and Marfa Invitational attendee, purchased a drawing by artist Stefan Rinck, whose sculptures and a handful of sketches were being shown by Nino Mier Gallery. Alongside epic, yet lighthearted, sculptures constructed out of marble and sandstone, Rinck’s small, simple, cartoonish figures stood out to Taylor for their humor, she said.

“One of the things about being a widow is I don’t spend that much money because I don’t buy that much food,” Taylor laughs, explaining why she decided to add the affordable piece to her art collection.

Taylor said her interests in art and architecture drive her to see what’s current and she likes being introduced to new ideas via Marfa Invitational, she said.

“I love seeing strangers. I’m gregarious, and I have great conversations with total strangers,” said Taylor.

While people-watching at the event, Taylor said she also likes to pick up on fashion trends, noting there were more dresses, prints and florals amongst the ladies and sensible footwear at this year’s event.

“The first year they did this nobody was wearing the right shoes. Women were walking around in heels,” Taylor laughs.

For Blay, the standout artists at the fair were Vera Girivi, Carter Flachbarth and Evgen Čopi Gorišek. He said he had some good conversations with some of the art dealers and described the four-day event as an “over-the-top art party.” Blay noted that the schedule of events was, at times, unclear as to which events were exclusive to VIP pass holders and which were open to the public.

Marfa Invitational associated exhibitions within local spaces included a showing of Will Cotton paintings at the Brite Mansion, and an exhibition of NFTs at Art Blocks by Leo Villareal.

Along with a handful of others, local gallery RULE hosted open hours coinciding with Marfa Invitational weekend for a new exhibition titled Lambi Kahani (Long Story) by artist Renluka Maharaj, who was in town to visit with gallery goers and host an informal artist talk. Maharaj is based in Colorado and Lambi Kahani is her second solo exhibition with RULE.

Maharaj is of Indo-Caribbean heritage and often explores impacts of Western colonialism and consumerism on those populations. In Lambi Kahani, Maharaj presents posed portraits of  indentured Indian women in Trinidad and Tobago made in the 1800s by a French photographer which were used as advertising materials to draw tourism to the West Indies. Exoticized and objectified, the names of the women were not recorded, said Maharaj, which led her to give them each names and title the works after them.

After a brief Q&A, the artist’s talk concluded and Maharaj introduced the gathered audience to her “mascot,” her dog Stella. Warmed from standing close together in one of the gallery’s small front rooms, talk attendees retreated to the kitchen bar to top off their Aperol spritzes.

Valerie Santerli, owner and director of RULE Gallery, which has locations in both Marfa and Denver, said she was pleased with the turnout and to see more people connecting with Maharaj’s work. One of the gallery’s goals is to facilitate longer conversations and engage people with artist’s practices, said Santerli.

“We’re not necessarily showing artwork that’s trendy. For us, we want to have sole conversations with people,” said Santerli.

Sales this past weekend were fair, said Santerli, but are not the gallery’s primary focus in their day-to-day operations.

The installation was organized by Brenden Cicoria, a freelance art handler and MSA board member, among other roles. Cicoria was motivated to organize a show of the artists’ work after a studio visit revealed a multitude of solo and collaborative projects just waiting to be seen.

“It just felt really cool to have the opportunity to have access to a space and give it to local people,” said Cicoria. “People who are living in the community and making really incredible artwork.” 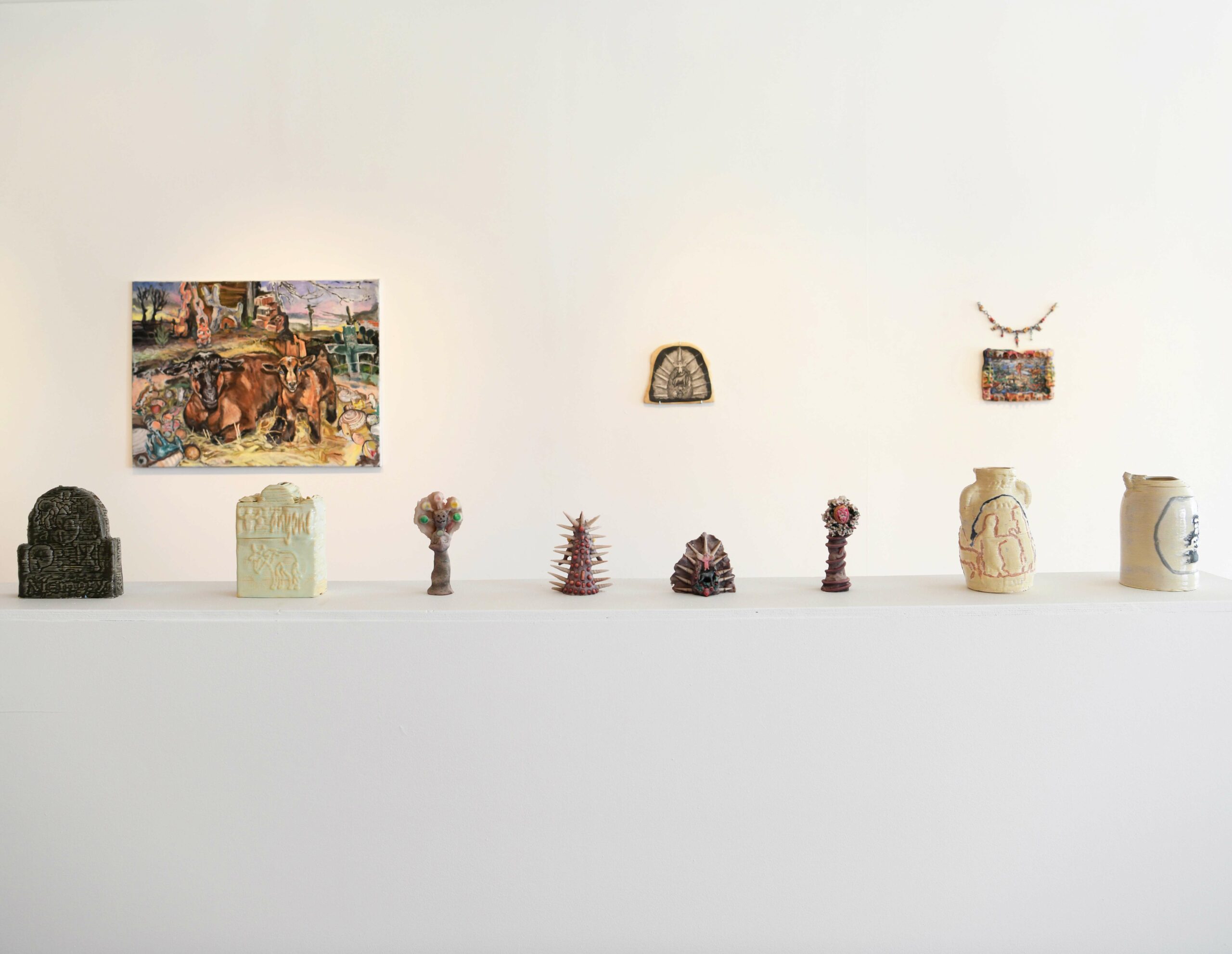 Exhibition view of Restland, a multimedia exhibition by emerging local artists Jacquelin Zazueta and Zak Ziebell which celebrated a closing reception at the Marfa Studio of the Arts this past weekend. Photo courtesy of Jacquelin Zazueta.

Partial proceeds of any artwork sold in the show are being allocated to support MSA’s programs providing arts programming for local children and young adults. Cicoria said it was nice to see Marfa Invitational galleries invest further into the community, like Nino Mier Gallery operating a more permanent space. Plus, the event being in its third year has given locals time to plan programming and pop ups around the influx of visitors.

“Seeing the town and smaller galleries and locals adapt has actually made me like this time a lot,” said Cicoria. “[The Marfa Invitational] being the thing that’s bringing people here is leading to all these other beautiful mushrooms of other cool things happening.”

Restland was a multimedia exhibition complete with paintings, ceramic tablets, and 3D printed ceramics and gypsum sculptures. It was Zazueta and Ziebell’s first real exhibition out of art school — they both attended Rhode Island School of Design — and most of the pieces were made in the past year since they moved to Marfa.

The artists said the fact that the show was taking place in a space which often showcases the artwork of children, who are free from the scrutiny of the adult and art world, seemed fitting.

“I feel like secretly every artist wishes to have like the looseness that kids [have],” said Zazueta. “When we first were setting up there was children’s art all over, which we were actually really excited about.”

The works on view were well balanced between the artists, who work closely together, often blending themes and techniques. The 3D printed ceramic vessels, for example, are an even showcase of their skills — Zazueta coming from a ceramics background and Ziebell more familiar with the technologies of 3D printing.

Paintings by Ziebell in the exhibition heavily feature adult and baby goats, which he chose for their unusual eyes, inquisitive personalities and symbolism. The theme of life is intentionally met with opposing themes of decay. Both artists are influenced by their catholic upbringings, they said.

Zazueta said she was surprised by the warm reception they received from the community for Restland, and now that they are more enmeshed in the local scene, is eager to see if, and how, that may influence their art practices.

“I don’t think we were expecting that to happen, especially in a town with a super minimalist artwork background. Because our work is––” began Zazueta, only for her partner to finish the sentence.

“A reaction against minimalism,” Ziebell laughs.