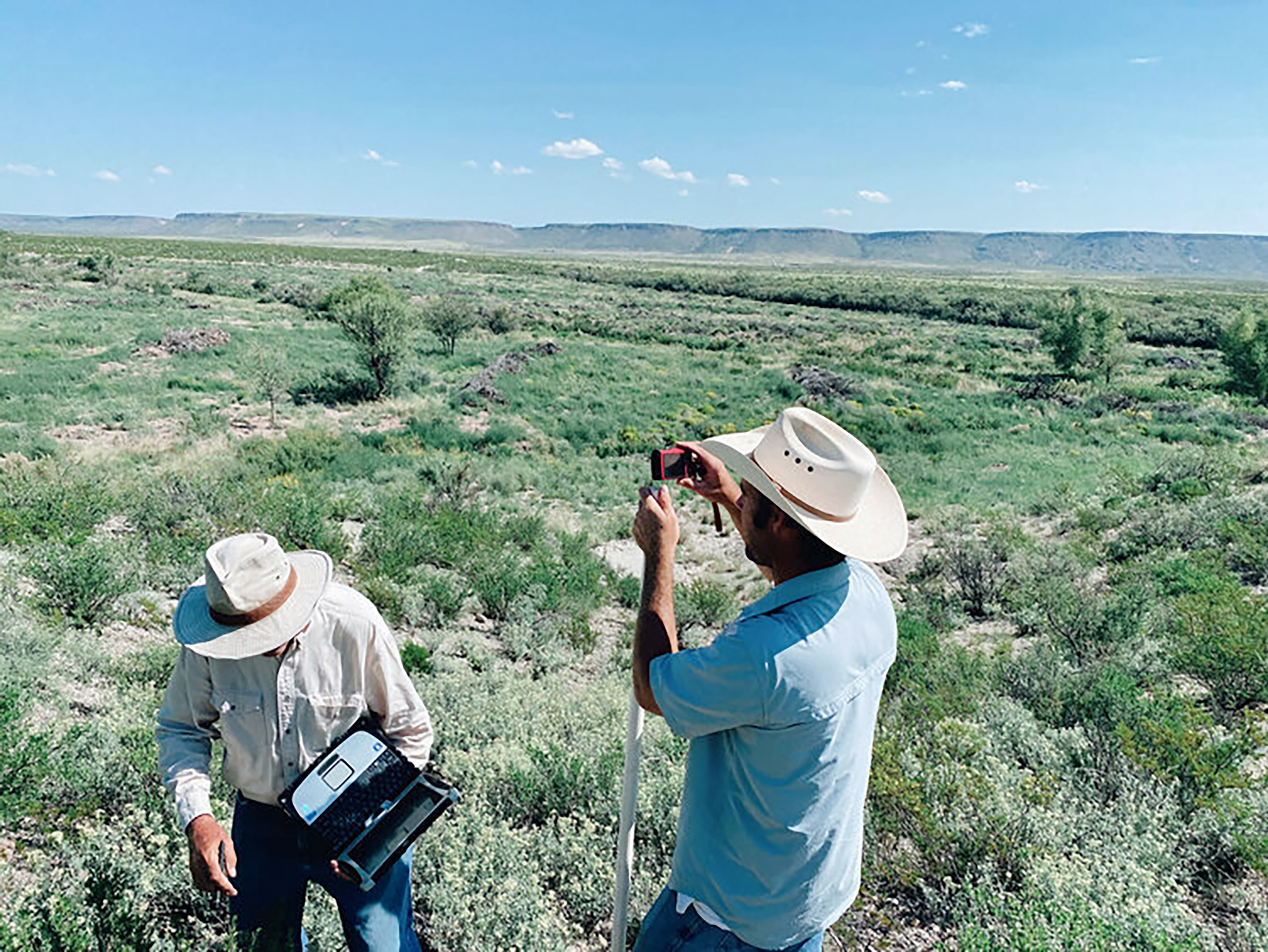 PRESIDIO COUNTY — The Alamito Foundation, a recently formed nonprofit organization so named for the 3,400 acre ranch it operates in the Alamito Valley just 20 minutes south of Marfa, is spearheading local efforts geared towards a unique twofold mission — to better the lives of Big Bend’s youth and to practice responsible land stewardship.

The foundation was first created last year by Garey Willbanks — Republican candidate for County Commissioner Precinct 4 and retired founder of hot water system supplier TEAL Systems — and just recently received its 501c3 accreditation from the Internal Revenue Service, allowing it to officially operate as a nonprofit entity. The foundation employs Caroline Travis as its programs director and Dr. Lynn Loomis as its land operations manager. Willbanks, inspired by the ecological restoration efforts of the Bamberger Ranch Preserve in Central Texas, acquired the land in 2021 with the intention of preserving it for future generations.

“It’s about people and cultivating in people the pleasures of the outdoors and the things you can enjoy outside that you can’t get on a computer screen or iPhone,” said Loomis.

While the organization is still, in part, in its discovery phase, it has a significant number of ongoing initiatives and projects relating to land restoration, educational and career opportunities for Marfa’s students and more.

“It’s taken us a year to really figure out what we’re going to do and what we’re excited about,” said Travis.

Over the past year, the foundation has been active in exploring its mission and implementing land management strategies to mitigate the process of desertification — the degradation of land as a result of drought, agriculture and more.

The ranch is primarily located within the Alamito Valley, an area complete with mixed prairie and desert grassland vegetative zones. The area, in addition to being well-defined by the presence of volcanic ash, consists of an escarpment, mesas, cliff faces and rocky canyons. The foundation has welcomed a number of students onto the ranch for educational opportunities including groups from the University of Chihuahua and Sul Ross State University. 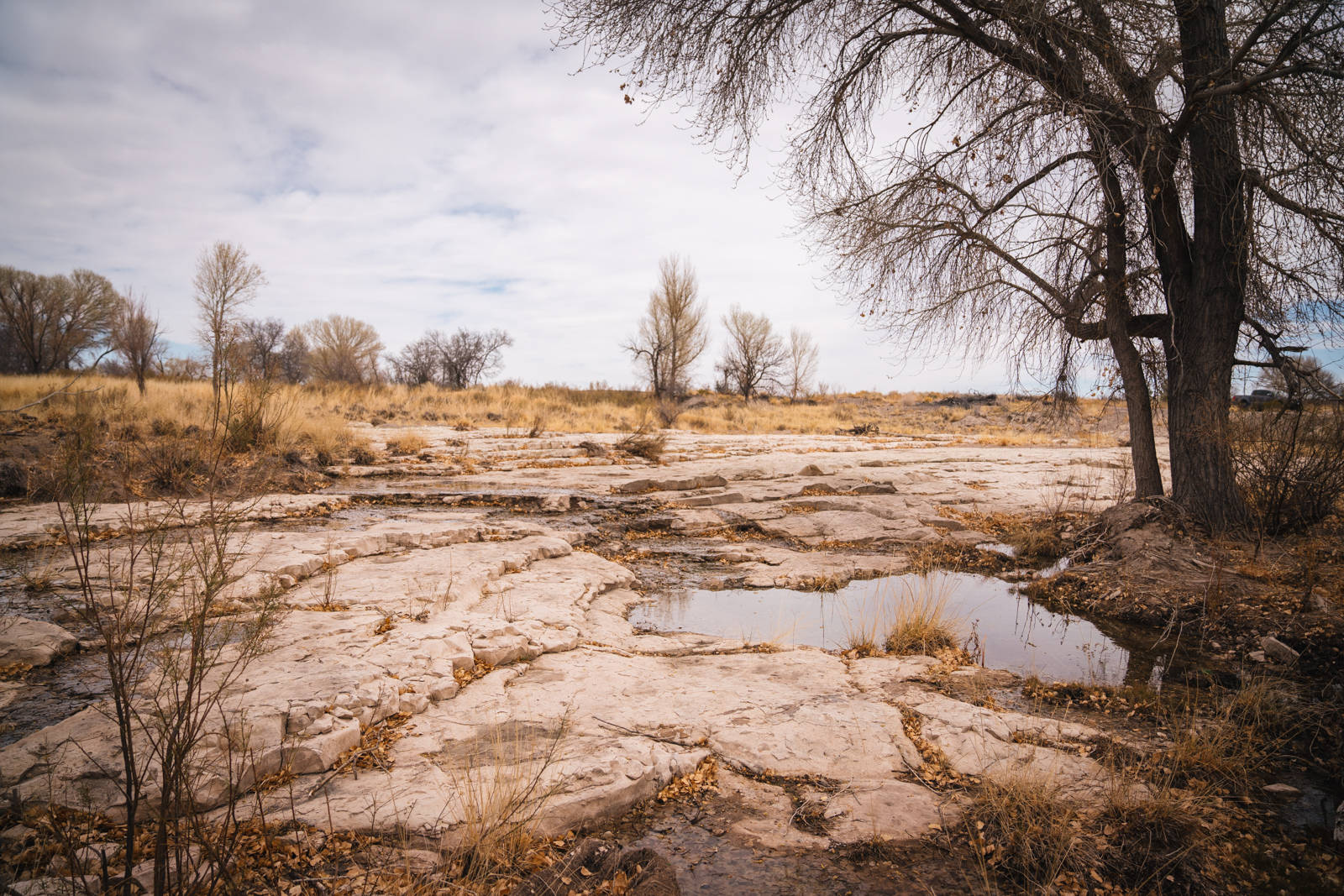 To date, various projects are underway on the ranch to restore the land to its preagricultural conditions, said Loomis, who worked as a soil scientist in Marfa for the United States Department of Agriculture for over 25 years and serves as an adjunct professor in the Natural Resource Management department at Sul Ross.

Loomis said the history of cattle grazing on the land dates back to the 1880s, when grass and water availability in the Alamito Valley first attracted ranchers to the area. The Mitchell and Aufdengarten families have historically utilized the ranch for raising cattle and still maintain some livestock on the property. The Alamito Foundation aims to harness conservation benefits that result from keeping livestock on the land while promoting the growth of native grasses by controlling cattle grazing via exclosures and cross fencing.

“The environment drew people to West Texas to start with. And through the years, the environment has degraded some, heaving grazing year in and year out in areas has reduced grass cover,” said Loomis. “We just want to make efforts to put it back to the condition it was when people first thought ‘hey, this is where we want to live’.”

The foundation is also seeking to remove mesquite and creosote — native woody plants which suck up water and lead to reduced groundwater recharge and springflow — via processes referred to as spiking and grubbing. Native grasses on the land were consumed by cattle while the shrubs remained. Over the past seven years, due to a grant provided by EQIP, around 40 to 50% of the Alamito ranch has been “spiked” for creosote, a method involving herbicide, or “grubbed” for mesquite, mechanical removal via an excavator. In the absence of mesquite and creosote grass begins to sprout, said Loomis.

Alamito Creek, which runs through the property, is another key focus of the foundation’s ecological restoration processes. Through a Texas Parks and Wildlife Landowner Incentive Program (LIP) grant, the Alamito foundation has received funding to install brush weirs along the creek which are meant to slow the velocity of runoff, giving water time to back up against creek channel walls in order to infiltrate into the soil and aquifer. The Alamito Creek Preserve, owned and operated by the Dixon Water Foundation, employs the same strategy.

Because Alamito Creek drains into the Rio Grande River then flows downstream to Lake Amistad, Falcon Lake and more, positive results could extend far beyond the boundaries of the ranch and affect the overall health of the watershed, said Loomis.

“The impacts of these projects can go all the way to the Gulf of Mexico,” said Loomis. “Downstream users benefit or are affected by the things that have happened in the watershed upstream.”

Loomis said another one of the foundation’s goals is to encourage young cottonwood trees to grow along the creek in order to continue to provide shade when the older trees perish. In Spanish, los alamitos translates to ‘the little cottonwoods.’

The foundation is currently brainstorming ways to express their goals depending on whether the ranch is experiencing a dry or wet year, said Loomis. A weather station that was installed earlier this year on the ranch provides real time data on the area’s temperatures, rainfall and soil quality. Those metrics, measured overtime, might also help provide further insight into the effectiveness of their land management strategies and allow them to share successful techniques with their neighbors.

Most recently, Alamito broke ground on a garden on the property that will be the site of an educational, entrepreneurial program for students who will be hired to maintain the garden and sell their produce at the local farmer’s market. The 140 by 100 foot garden is situated near Perdiz Creek, a valuable spring-fed water source for wildlife and one of two creeks on the property in addition to Alamito Creek, which only flows during heavy rains.

Not long ago, Alamito hosted sixth through eighth grade students for Summer Shake Up via Marfa Independent School District, a program which pairs local kids and entities for camp-like activities. Visitors to the Alamito Foundation ranch explored the property and participated in workshops on animals held by TPWD as well as a soil and plant class led by Loomis in which children made seed bombs for their yards. Travis said kids enjoyed the opportunity to experience a private ranch and to become familiar with the area’s biological diversity. 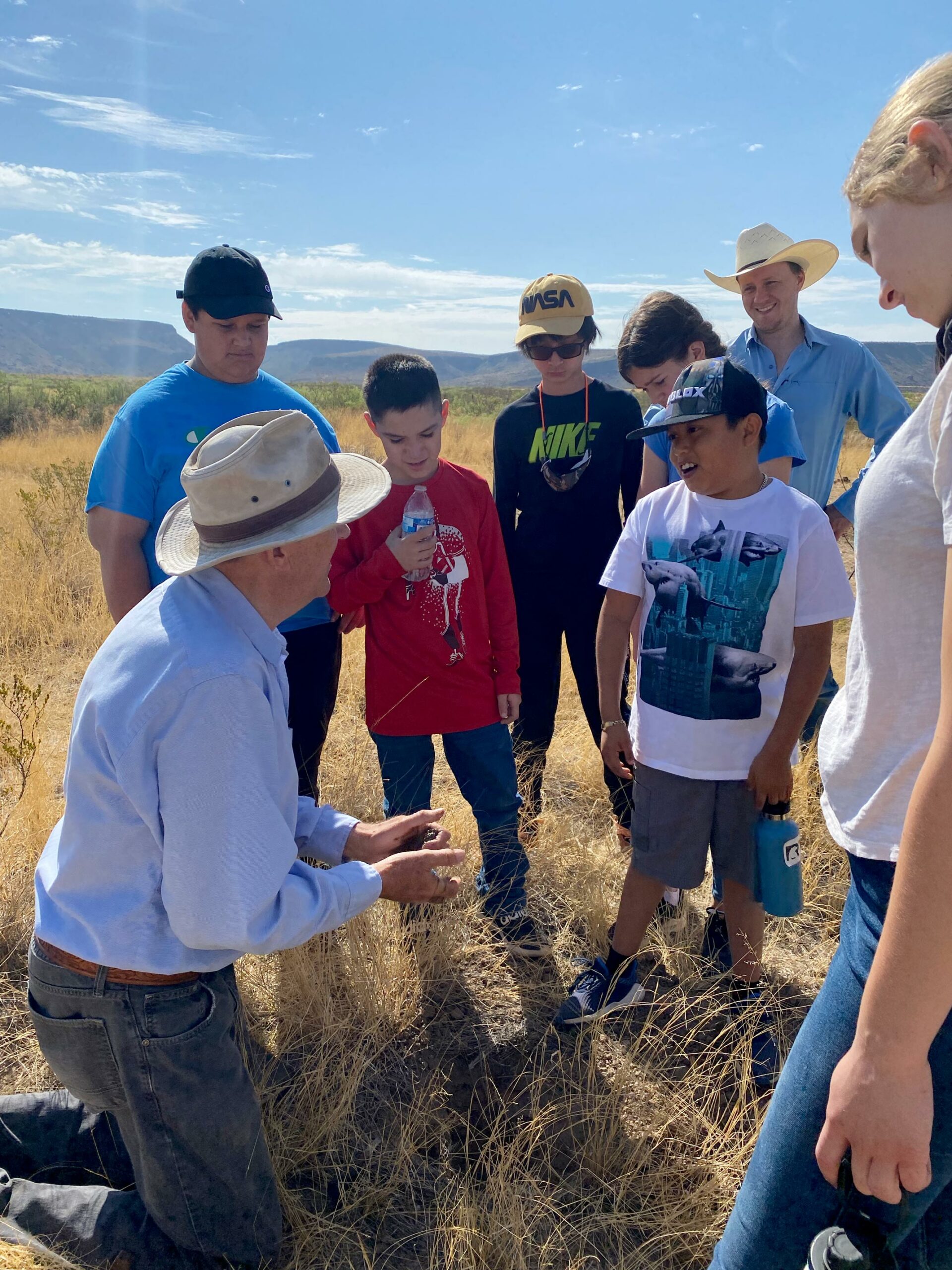 “The exposure to the native species, to what’s surrounding us and just exploring, there’s no expectation, there’s no test. It’s just, let’s enjoy this creation and experience it together,” said Travis.

“The Alamito Ranch was fun because you get to learn a lot about plants that are there,” said incoming sixth grader Aidyn Gonzales. “You learn how you could survive in the wilderness. You also learn about types of deer and bears around the area and a bunch more animals.”

Travis, who before working for the Alamito Foundation taught math and science at Marfa Elementary School, has been busy this summer taking incoming MISD juniors and seniors on college tours across the state to Texas A&M Corpus Christi, University of Texas Rio Grande Valley and more.

“Visiting all the colleges really opened my eyes to a world of possibilities right here in Texas,” said incoming junior Luis Solis. “My favorite experience during the trip was touring the beautiful campus of [Texas] A&M Corpus Christi. Overall it was such a good and eye opening experience to have had and shared with amazing people.”

Along with her husband Connor, Travis helps run the local Young Life chapter, a Christian organization serving young adults, and has been able to bring her existing experiences and relationships with the local high school students into her work at Alamito, which sponsors the college tours. Alamito has also conducted tours of trade schools for students and offers scholarships for students pursuing various types of continued education. 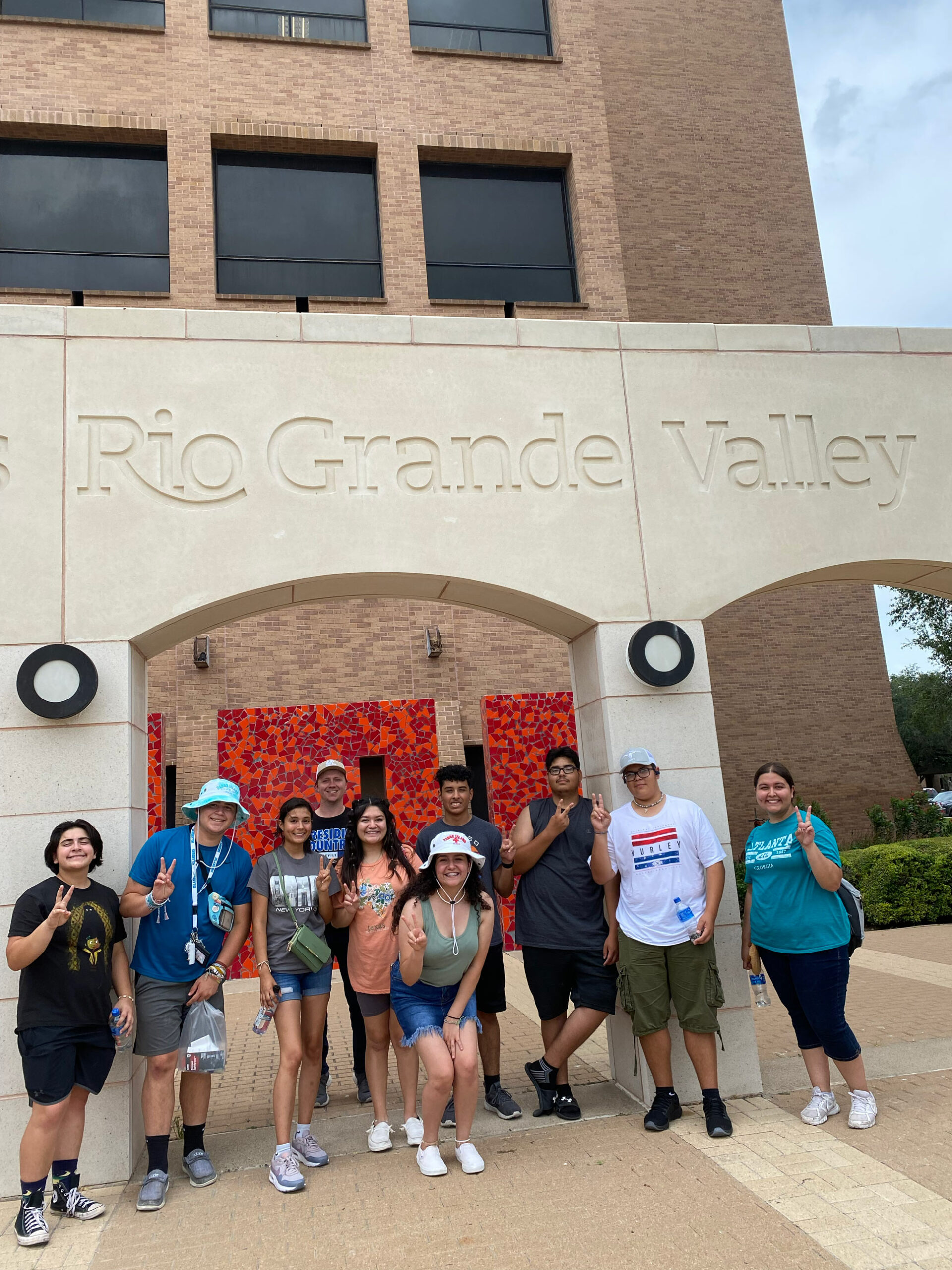 Helping local students explore options for their futures and connecting them with the necessary resources, whether it be mentors or scholarship funds, is at the heart of what Alamito Foundation is looking to provide, said Travis, who underscored her fondness for Marfa’s youth.

“The importance is that kids feel honored and supported, and then from there they figure out what do I want to do? Not just what do I have to do?” said Travis. “If I was a college, or if I was a business, I would want them on my team. That’s how I feel about Marfa students.”

Of the younger generations, particularly those who are becoming landowners, said Loomis, many are adopting different values than their predecessors, prioritizing ecological health and aesthetically pleasing environments with elements like running water and trees over land production. And private landowners are well positioned to be good stewards of the environment, he said, because they are able to make decisions and may be more motivated than public land operators.

“It’s about instilling in people the appreciation for the outside environment and the other things it can provide besides just a hamburger or a pair of wool socks,” said Loomis.