Heavy rainfall brings some relief, and flooding, amidst extreme drought 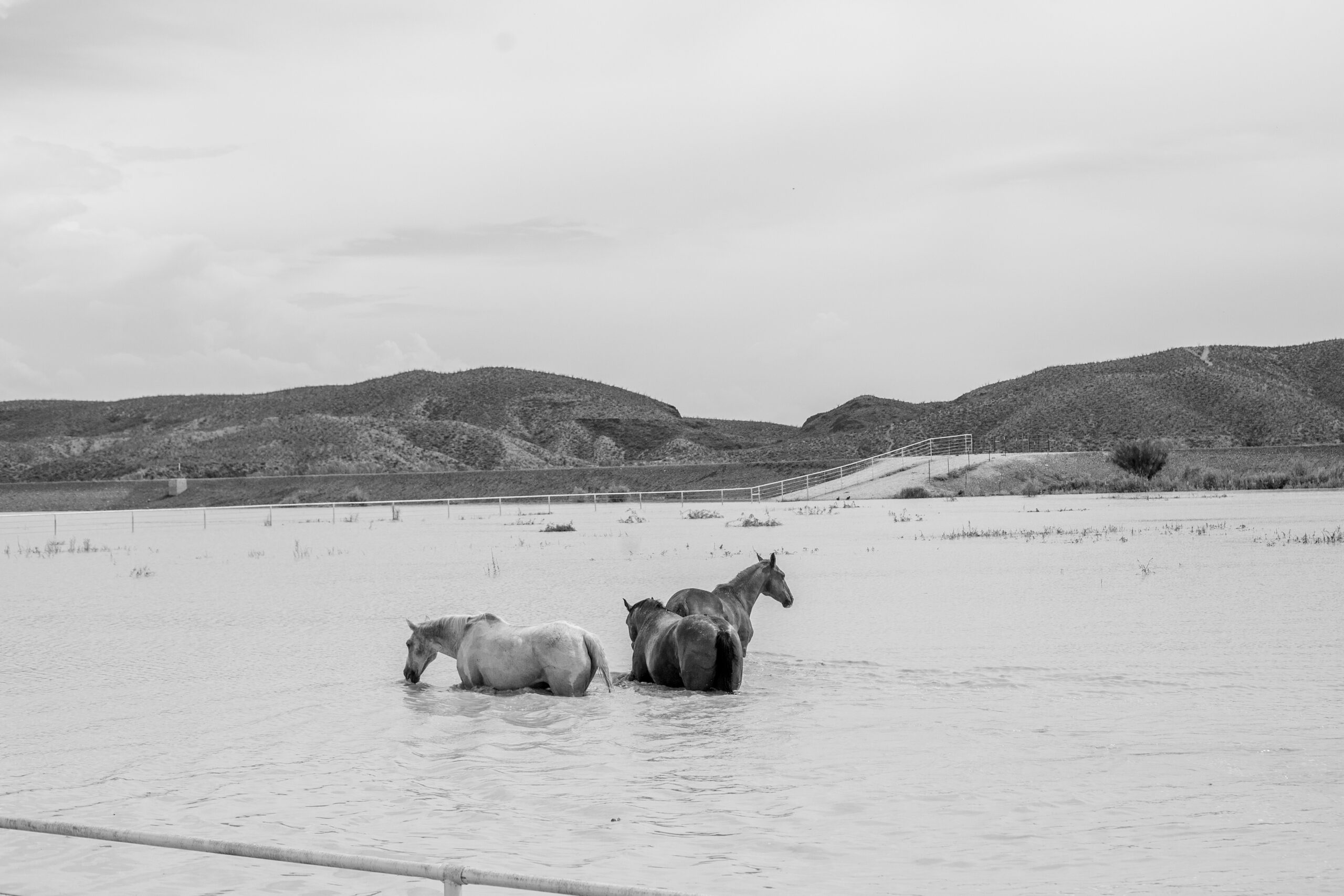 A pasture along River Road outside Presidio was flooded when heavy rainfall swept the region on Thursday. Photo by Hannah Gentiles.
Subscribe

TRI-COUNTY REGION — Last month, large swathes of Presidio and Brewster counties were declared to be under “exceptional drought,” the highest category on the U.S. Drought Monitor — a continuation of a troubling trend that had persisted through the year. The Rio Grande’s Santa Elena Canyon had dried up in the spring. Further north in Presidio County, the bone-dry terrain led the Marfa Fire Chief to warn residents of “extreme wildfire conditions.”

But a recent wave of rainfall has turned much of the land from arid and lifeless to a vibrant green. Currently, the drought monitor shows Presidio and Brewster counties, previously either under exceptional or extreme drought, brought down to a mix of extreme and severe drought — a notable step down. Over the weekend, the banks of the Rio Grande overflowed in Presidio County, and the water was high and fast enough to facilitate river runners. Flooding overtook parts of the county, including in Big Bend Ranch State Park.

“We have flooding right now, mostly in our arroyos,” said Ranger Laura Jennings of Big Bend Ranch State Park on Tuesday. “So the river is up pretty high right now.”

Jennings said the park has seen an uptick in day use for river permits — a telltale sign that the Rio Grande has bounced back, if only temporarily. The flooding that accompanied the river’s rise, meanwhile, led to camp ground roads being washed out. “We don’t do a lot of advertising to bring people into the park in the monsoon season,” said Jennings. “We want to make sure people are enjoying their vacation and not getting their vehicle trapped or getting trapped in an arroyo for several days.”

But the heavy rainfall that has revived the river this past week is not exclusively due to the region’s annual monsoon season — which generally kicks off around August or September — according to Julie Phillipson, a meteorologist with the Midland office of the National Weather Service. Recent rain activity is actually a byproduct of a tropical storm in South Texas that moved up through the Rio Grande Valley, plus a recent cold front, she explained. An additional storm that formed in Mexico contributed to recent flooding in Presidio.

“It is partially attributed to the monsoon, but there are a lot of different factors involved,” said Phillipson.

Phillipson added that the varied terrain of the Big Bend region primes it for flooding in some areas.

On Wednesday, the National Weather Service issued flood warnings for the Rio Grande from Presidio to Boquillas. And while rain chances could decrease over the weekend, they may pick up again next week, leading to yet more flooding.

The precipitation is a welcome relief from exceptional drought conditions, said Phillipson — but the drought is by no means over.

“Droughts aren’t unusual, but the longevity of this drought is one of the worst droughts that we’ve had since 2011, and the precipitation is definitely going to help provide a little bit of reprieve from the drought that we’re in,” she said. “But it’s still going to take a lot of rainfall to recover — there’s still replenishing the lakes and aquifers … that will take more precipitation, but this will definitely help in the short term.”

Jennings said she and the rest of the park staff have been enjoying the effects of the rainfall — avid birders with the park have been pointing out the emergence of new species, monsoon clouds make the colors along the River Road pop, and there is some relief to knowing the wildlife will benefit.

“It’s encouraging, especially after the river’s been so low, to know the critters aren’t as stressed out and to know we’re getting some recharge in our backcountry,” said Jennings. “I’m really grateful everyone’s getting a second wind.”