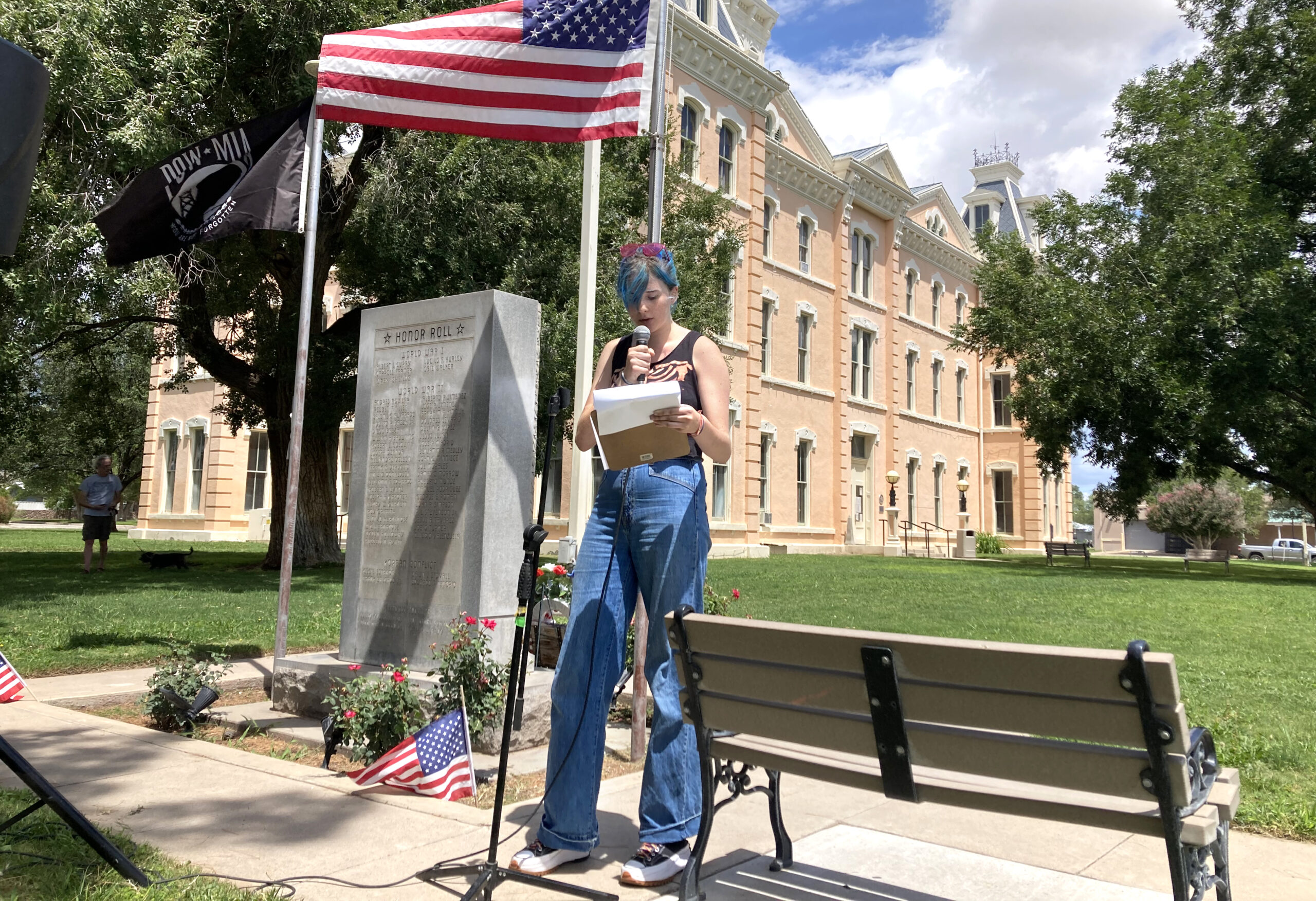 Louise Culbertson, 14, organized the March for Our Freedom rally outside the Presidio County Courthouse on Saturday along with the Big Bend Reproductive Coalition. Staff photo by Allegra Hobbs.
Subscribe

MARFA — When a sizable group of locals turned up at the Presidio County Courthouse lawn on Saturday afternoon to rally for reproductive rights, it was a blue-haired teenager who addressed the crowd on the urgency of the moment, the grim reality of lost abortion access, and the next steps for political change. When the crowd moved down West Lincoln Street holding handmade signs, the teen led the way, equipped with a megaphone.

By the estimation of the Big Bend Reproductive Coalition, which co-organized the event with Culbertson, around 75 people attended the “March for your Freedom.”

Culbertson is a born-and-raised Marfan whose family has relocated to Paris — but she makes it back to her hometown once or twice a year, and already has a history of local activism. At only 10 years old, with the help of her mother, she organized a local March For Our Lives in support of gun control legislation in Marfa. In Paris, she is currently active in the Democrats Abroad organization.

“My entire life, I’ve been very interested in politics and politically active,” Culbertson told The Big Bend Sentinel, adding that she continues to feel a deep investment in American politics. “Being that it’s my home country, I feel more connected to it than I do to Paris or France.”

And in her home country — specifically, in her home state — a government crackdown on reproductive rights has now spurred her to action. In June, the Supreme Court voted to overturn Roe v. Wade, ending the federally guaranteed right to abortion; in Texas, days before Culbertson’s rally, a “trigger law” took effect which makes performing an abortion in the state a felony, with rare exceptions.

At Saturday’s protest, Culbertson shared her fear of what such restrictive laws could mean for her and those of her generation.

“As a 14-year-old, I have to fight for my reproduction rights for my future and the future of many others,” she said. “The fear that I hold that I will grow up in a country where I don’t have the freedom of choice in abortion is horrifying. What if I am the one holding the stick with two pink lines? At that point, what will the laws be?”

Culbertson also criticized the lack of sex education in schools, called for free, accessible contraception and spoke on the need for childcare “no matter what.”

The action comes as campaign season is in full swing, just ahead of some contentious local and statewide November elections — speakers on Saturday used the opportunity to advocate for more progressive candidates than currently hold office and to encourage voting. Precinct 4 County Commissioner candidate David Beebe advocated for Rochelle Garza for attorney general. Marfa City Councilmember Jason Ballman was present to help register people to vote.

Lisa Kettyle, co-founder of the Big Bend Reproductive Coalition, encouraged those gathered to vote for Beto O’Rourke for governor of Texas — “I don’t want to hear we can’t have a Democratic governor in the state of Texas,” she said. But she pushed for hyperlocal change as well when pointing to some earlier controversy around Saturday’s event.

Culbertson had appeared before the Presidio County Commissioners Court the previous week to seek permission for her gathering, sparking discussion as to whether such permission was even necessary. Presidio County Judge Cinderela Guevara’s new project manager, Cecy Bejarano, had told her to seek permission, said Culbertson, and Guevara had told her to get on the court’s agenda so she could speak at the meeting. Culbertson was quickly given the green light, and county officials contended there was merely confusion about what events were allowed without a permit — plus, explained Bejarano, there were concerns about Culbertson’s safety and the safety of attendees. (As it turns out, events with fewer than 250 attendees, with no water or power hookups, do not need permission from the county — Culbertson’s event qualified as small enough but did end up using amplified sound).

Still, the matter prompted some backlash, becoming a flashpoint of local political controversy — Beebe spoke out on social media and at commissioners court on Culbertson’s behalf — and Kettyle, at Saturday’s protest, called out the court and Guevara specifically in her speech, noting citizens should not need permission to gather in a public space.

“Cindy Guevera is up for reelection this year — let’s get her out of there,” said Kettyle, prompting a mixture of cheers and booing. Guevara, previously a Democrat, is now running for county judge as a Republican. Kettyle said she had yet to meet with Guevara’s Democratic opponent, Joe Portillo Jr., to discuss his stance on abortion, but her mind was made up.

“I can say this: Cindy Guevera does not have your best interest at heart,” she said.

When reached for comment on the matter, Judge Guevara said the permitting mishap was a misunderstanding — it was normal procedure for a citizen seeking to use a county facility for an event to go through the facilities coordinator, she said. Ultimately, however, Culbertson’s right to assemble was protected by the First Amendment.

“This was not an item that should have been considered by Commissioner’s Court. As County Judge, I am responsible for the agenda. I apologize. I am completely committed to preventing this from happening again,” said Judge Guevara.

After the rally, the protesters marched down West Lincoln Street to the Marfa High School before turning around and making their way back to the courthouse. Culbertson, for her part, when asked how she feels about the future of Texas, said she was “not very hopeful,” especially when assessing the state of the Supreme Court, but that she does have hope for O’Rourke winning the governorship — “I do think that’s going to happen.”

Optimistic or not, Culbertson expressed a resolve to keep advocating for her home state, her hometown and her country, and encouraged her fellow protesters to do the same.

“We cannot go backwards anymore than we already have,” she said. “We shouldn’t even have to be fighting for our rights and our freedom of choice in the first place, and even if it’s just in a small Texas town, we are making a difference.”

abortion reproductive rights
Stay in touch with The Sentinel
Related