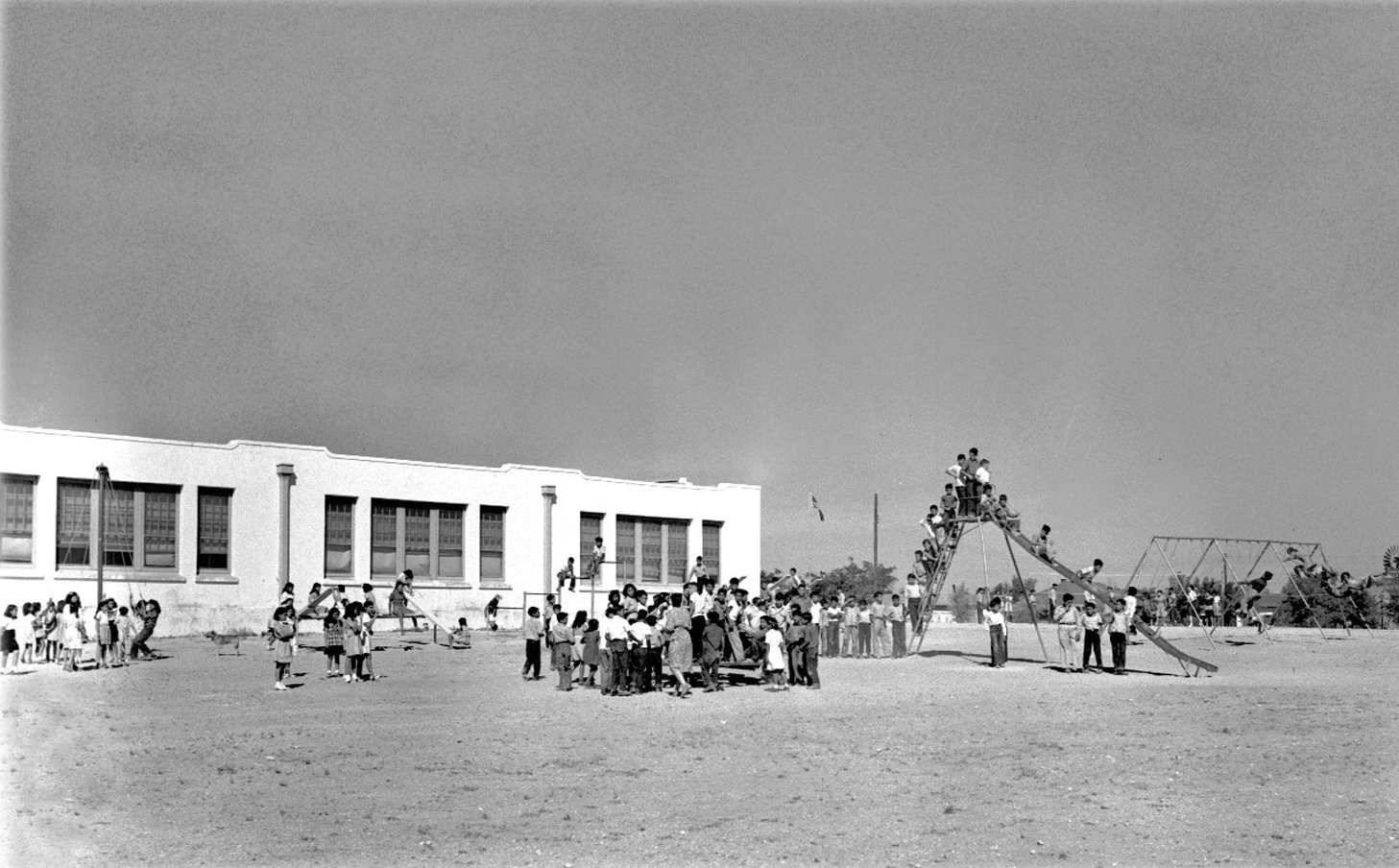 A vintage photo of the playground at the Blackwell School. The Blackwell School provided education to Marfa students of Mexican descent from 1909 to 1965 and was officially designated as a National Historic Site this week. Photo Courtesy of Marfa and Presidio County Museum.
Subscribe

MARFA — This Tuesday, Congress voted to pass a law designating Marfa’s Blackwell School, which served as school for Mexican American students from 1909 to 1965, a National Historic Site.

The designation has been 16 years in the making and dates back to the formation of the Blackwell School Alliance, a local group of alumni and school proponents, which currently operates the one-room adobe schoolhouse as a museum. Blackwell is one of the only remaining original structures that tells the story of de facto segregation for students of Mexican descent in the Southwest and was listed on the National Register of Historic Places in 2019.

“The message that Mexican American students received when they stepped through the doors of the Blackwell School was simple: you are second-class citizens,” wrote Theresa Pierno, president and CEO for The National Parks Conservation Association (NPCA) in a statement. “They were given hand-me-down furniture and outdated textbooks. They were told to bury their native language and leave it behind. They were threatened with punishments if they disobeyed. The odds were stacked against them, but many Blackwell students persevered and even saw their school as a place of joy.”

Many involved in the effort to gain historic site designation for Blackwell School, including senators, representatives of the NPCA, Blackwell alumni and more, emphasized the significance of obtaining national recognition for a site that specifically commemorates Latino history — stating it was a monumental step towards the National Parks System encapsulating a more complete, diverse story of the country’s history.

“With the Blackwell School National Historic Site, we can commemorate how far we have come, while also remembering some of the wrongs that happened here in Marfa. The lessons taught here can help us understand discrimination and racism, and better equip us to fight back against those forces in the present,” said Mario Rivera, Blackwell School alumnus and founding Blackwell School Alliance board member in a press release.

“Our historic schoolhouse speaks to an experience of segregation that was common in schools and many aspects of daily life in Texas and other border areas, yet is now forgotten. The Blackwell School is as significant today for understanding American history as it was to us decades ago as we began our education,” Rivera continued.

The Blackwell School National Historic Site Act passed the House of Representatives Tuesday with 414 members voting yea and 12 voting nay. The bill, which was first introduced in 2020 by former Representatives Will Hurd and Filemón Vela of Texas, passed the senate in May but was sent back to the house for minor revisions. The bill will now be sent to the president’s desk to be formally signed into law.

Congressman Tony Gonzales, whose district includes Marfa, backed the bill, and applauded its passage in a statement on Tuesday.

“For decades, the Blackwell School has been an important piece of history for the City of Marfa, West Texas and Mexican Americans across the country. Establishing the Blackwell School as a National Historic Site will cement its rich, complicated legacy for generations to come,” said Gonzales.

This past July, the Blackwell School Alliance and the NPCA held a community workshop in which alumni, descendants and others talked through changes associated with the school transforming into a National Historic Site operated by the federal park system. Attendees discussed what they wanted visitors to take away from the site, how to present a layered, complex story that reflected both the positive and negative experiences of Blackwell students, and more practical day-to-day concerns about how increased traffic to the area might affect the neighborhood.

At the time, Gretel Enck, president of the Blackwell School Alliance, urged continued participation from the local community as the National Historic Site continues to take shape. Enck said public meetings such as the one held in July will continue to take place moving forward.

The Marfa Independent School District currently owns the Blackwell School and adjacent lots and leases the property to the Blackwell School Alliance. Superintendent Oscar Aguero said discussions about the sale of the property were just beginning, but the school district will benefit from the sale. The National Park Foundation will likely be the entity acquiring the property, according to NPCA spokespeople.

For Daniel O. Hernandez, a descendent of an alumnus and a member of the alliance, the news that Blackwell will become a National Historic Site was both exciting and humbling. He said the recognition helps honor the collective memory of students who experienced discrimination across Texas and the country.

“This designation validates the experience of these students who lived through a difficult chapter in our nation’s history — an experience that deserves deeper study and greater awareness,” wrote Hernandez in a press release. “I’m immensely proud that our nation’s newest venue for examining difficult history will reside in Marfa, Texas.”

the blackwell school
Stay in touch with The Sentinel
Related