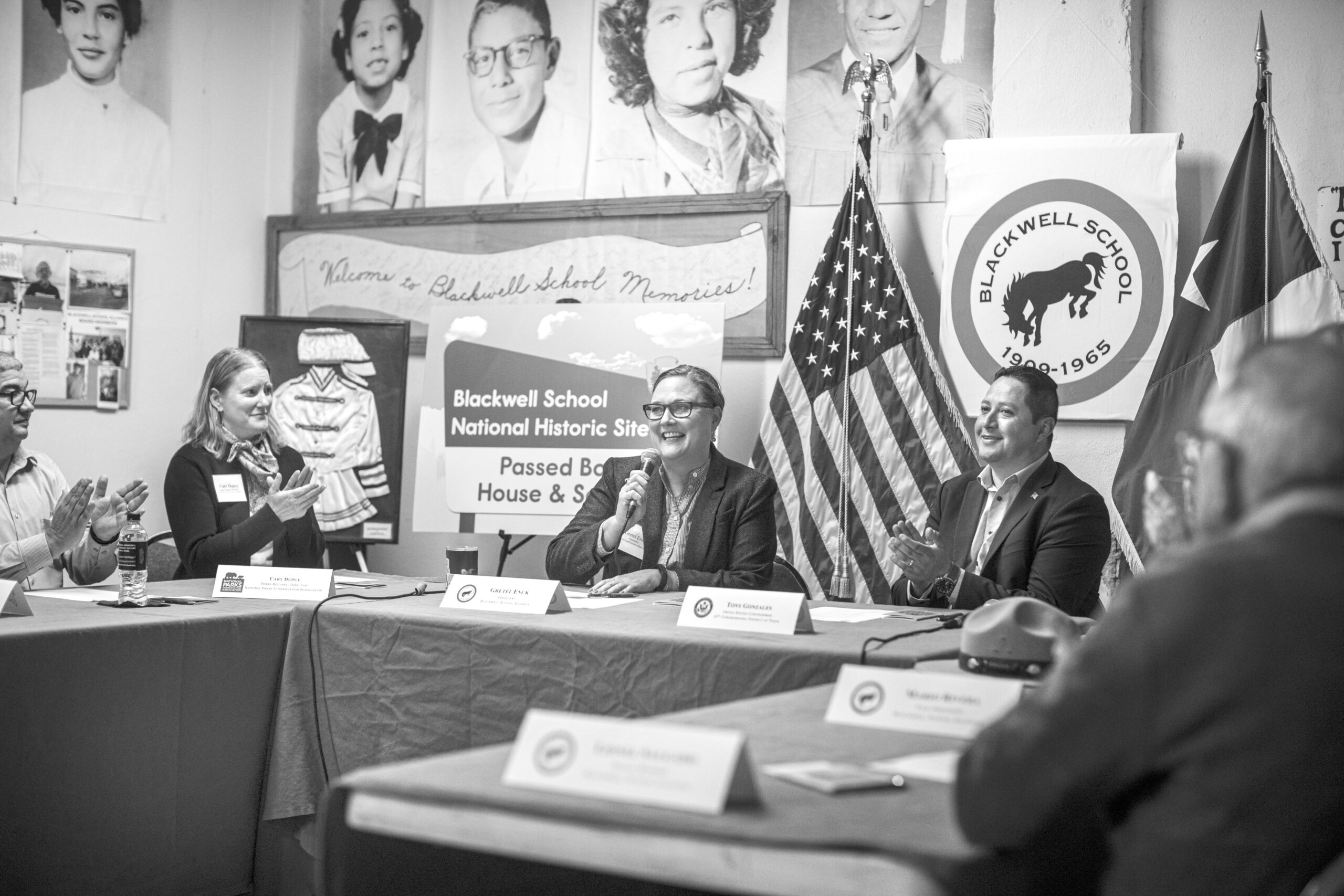 MARFA — On Monday, President Biden signed the Blackwell School National Historic Site Act into law, marking the conclusion of a yearslong quest by alumni, activists and lawmakers to see the adobe structure, which served as a school for Mexican American students from 1909 to 1965, designated a National Historic Site.

Members of the Blackwell School Alliance, a group of alumni and school proponents that had lobbied for the designation, gathered with supporters at the site on Tuesday to celebrate the long-awaited victory. For alumni, the designation is an important milestone in the preservation of the school’s history, now formally recognized not only for its personal significance to those who attended, but its national significance as a site commemorating the segregation of Mexican American students in the U.S.

“I have so many memories of Blackwell — bad ones, but I learned from them. Starting today, it’s going to be a new tomorrow for me. This will be my past,” said alumnus and Blackwell School Alliance member Jessi Silva.

The alliance was formed 16 years ago, beginning with an informal reunion of alumni passionate about seeing the school’s history preserved. When those alumni got wind of rumors that the Marfa ISD Board might be selling the property, they struck a deal with the board to lease it in order to ensure its preservation. The group’s efforts grew exponentially from there — several years ago, a letter writing campaign urged the designation of the schoolhouse as a National Historic Site. Legislation to that end was first introduced last year, and was finally passed by Congress in September. On Monday, with President Biden’s signature, the alliance’s yearslong fight is finally over.

The designation makes the site a part of the National Park System, and it will be maintained by the National Park Service. The next step is for NPS to acquire the land the structure sits on from the City of Marfa, a process the service said could take more than a year.

Gretel Enck, president of the Blackwell School Alliance, noted on Tuesday that the victory of the designation is just the beginning when it comes to preserving and conveying the vital slice of local — and American — history.

“Everybody’s stories matter, and we hope that this is the tip of the iceberg, that this is the beginning of opening a new era of people understanding that borderland stories, Hispanic-Latino stories, are American stories,” said Enck. “This is a critical piece of American history, and yes, it is a very personal, local story, and it is so much more than that. We are celebrating a great milestone today, and know that this is just the beginning of a big, new chapter.”

The site is now one of few devoted specifically to the commemoration of Latino history. Congressman Tony Gonzales, who had backed the bill, came to Marfa to celebrate with the alliance and noted the designation’s national significance — the only other National Historic Site commemorating Latino history, to his knowledge, is the Cesar E. Chavez National Monument in California.

Senator John Cornyn was unable to attend due to weather conditions, but representatives from his office were present at the small gathering.

In an interview with The Big Bend Sentinel, Gonzales echoed Enck’s sentiments that the designation is just the beginning. Now, the Congressman hopes to work with the alliance and alumni to “keep that momentum going,” which will include working with House Committee on Natural Resources Chairman Raúl M. Grijalva, the White House, and the National Park Service to assess what the group needs moving forward.

“I sit on the appropriations committee, and part of this is to go, what appropriation funds do you need in order to make this site one of the nation’s most amazing sites, that brings to life the stories, so it’s not just a plaque on a wall that people drive by?” said Gonzales. The input of alumni, he said, will be integral to that process.

Blackwell alumnus Lionel Salgado told The Sentinel that he is hopeful the new designation will bring more attention to the site and the history it has to tell.

the blackwell school
Stay in touch with The Sentinel
Related