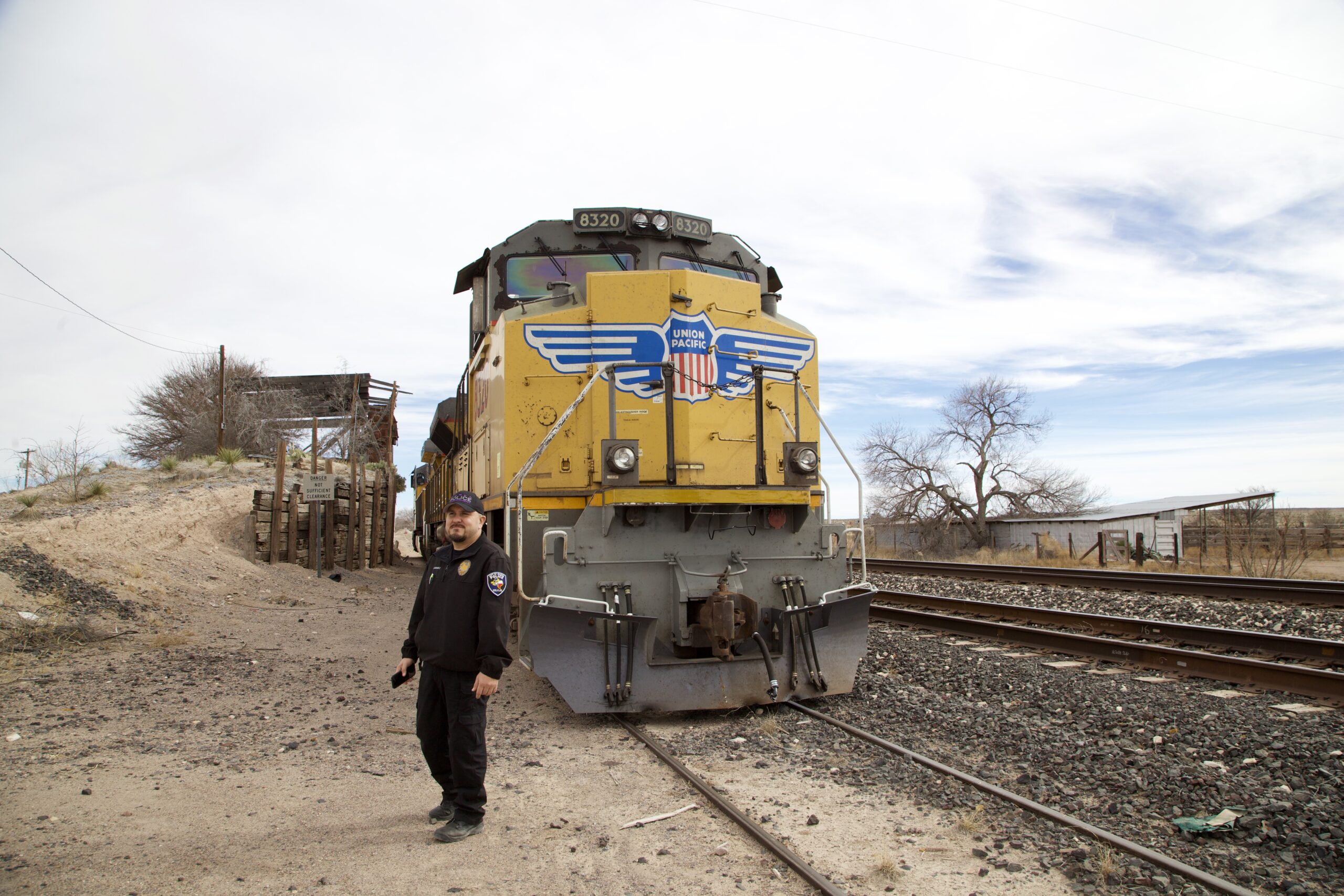 MARFA — Union Pacific on Tuesday hosted a course in Marfa for local law enforcement focused on public safety around the railroad tracks that run through the city and surrounding region.

Union Pacific hosts the course in communities along its tracks every few years — the company has done so three times in Marfa within the past decade, according to Union Pacific spokesperson Robynn Tysver. Marfa Police Chief Steve Marquez estimated the last course held in Marfa took place in 2018.

Mike Brucks, Union Pacific’s public safety special agent in El Paso, said the company’s goal is both to educate law enforcement officers and first responders and to increase public awareness about track safety. “It’s for public awareness, so we can get the word out that the railroad tracks are dangerous,” said Brucks.

The course’s return is not in response to any one incident, he said — but a series of incidents.

“It’s in response to a collection of incidents,” said Brucks. “Every year, trains strike about 2,000 people — that’s vehicles and pedestrians — and of those 2,000, probably 1,500 of them are seriously injured or killed.” He was careful to note that was roughly 2,000 collisions total, not collisions involving Union Pacific trains.

The railroad tracks in Marfa have, in fact, been the site of several tragedies.

In 2013, Marfa resident Melaney Parker Rayburn was struck and killed by a train near Russell Street. Her death was ruled a suicide, though the family claimed her death was not properly investigated.

In 2016, Marfa teenager Jason Molinar was struck from behind and killed by a Union Pacific train in Marfa while walking on the tracks with headphones on. The child’s mother sued the railroad company, alleging operators failed to properly notify her son or slow the train in a timely manner. A 2019 trial concluded with a jury verdict in Union Pacific’s favor; last year, the Eighth Court of appeals in El Paso upheld the trial court’s ruling.

And more recently, in 2021, a less severe incident took place at a crossing, resulting in two injuries. City of Marfa Public Utilities Supervisor Chuck Salgado was driving his truck over the railroad crossing near the cemetery when struck by a Union Pacific freight train. Salgado and his nine-year-old son, who was in the truck with him, were injured in the incident. Salgado was charged with failure to yield right of way at railroad crossing.

Chief Marquez said for his department, the local tragedies are top of mind. “We all know about the tragedies we’ve had along the railroad tracks,” he said.

Brucks said the public should be aware that land within 25 feet of the rails is railroad property, and that anyone on that land is trespassing. That land is not labeled as such, he said — “Union Pacific owns 35,000 miles of straight line track — there’s no way that we can mark all of that” — but police may enforce trespassing laws to keep the space around the tracks clear.

Marquez said his department’s protocol is to inform anyone too close to the rails that they are trespassing, and to issue citations if necessary. Tuesday’s course will not result in any new or increased enforcement, he said — it simply serves as a reminder of existing protocols and informs new officers who have joined the department since the railroad’s last training.

Marquez said his department had dealt with people sitting on the tracks or getting too close for the sake of a photo — his officers tell those tourists to keep a safe distance. “We try to tell them to stay off the tracks — if you want to take a picture of the train on the other side, from the post office or from where the St. George parking lot is, that’s fine, but we want everyone to stay away from the train. We explain to them that we’ve had incidents in town.”

Following an overview of the laws and protocols, as part of the course, Union Pacific took officers on a train through Marfa, “observing motorist and pedestrian behavior at all four crossings in Marfa,” said Tysver. Officers were also stationed along the tracks during the exercise to ensure safety rules were observed and enforced.

Tysver issued a few safety reminders for Presidio County residents: drivers should expect train traffic from either direction on the railroad, and trains can be “closer, faster and quieter than you think”; trains can take more than a mile to stop once operators have applied emergency brakes; drivers should never drive around lowered gates, and if their cars end up stalled on the tracks they should get out and notify the number on the blue sign near the crossing; lastly, Union Pacific urges drivers and pedestrians alike to only cross at designated crossings.