Gina Chavez dances with the crowd during her Friday night set at Planet Marfa. (photos by Sarah M. Vasquez)
Donate

FAR WEST TEXAS – It was a weekend of rock ’n’ roll, cumbia and two-stepping. The annual Viva Big Bend music festival returned to the tri-county area for its eighth year with an eclectic mix of over 50 Texas bands playing at various venues in Alpine, Marfa, Marathon and Fort Davis.

The festival kicked off with a free show at the Starlight Theater in Terlingua with Butch Hancock of The Flatlanders. Hancock was eventually joined on stage with one of his bandmates, Jimmie Dale Gilmore.

The dance party didn’t stop all weekend, no matter the genre, with the performers at times joining in. Mélat, a first-generation Ethiopian-American, brought her soulful R&B tunes to Planet Marfa. At first, people sat while they took the music in, but after her spot-on cover of the beloved ‘90s tune “Weak” by SWV, some started to cut loose.

Patricia Vonne opened Saturday night’s show with her bilingual fusion of rock music at the Saint George Hall. After her set, Vonne joined the crowd for The Tex-Mex All-Stars featuring Shawn Sahm, the frontman for the current incarnation of the Texas Tornados, guitarist John Jorgenson, violinist Bobby Flores, and Freddie Steady Krc, who has worked with Jerry Jeff Walker and Carole King.

The summer heat didn’t hinder the dance moves at the Kelly Pavilion in Fort Davis either. Doug Moreland returned to his hometown to start the Saturday afternoon of free music, followed by Gina Chavez, Donovan Keith, and Western Youth. Keith is a familiar face to Viva Big Bend, as he has performed at the festival every year–either solo or fronting his band, Soul Track Mind.

Moreland tested his musical endurance with two additional shows after his Fort Davis performance. He played at the dedication ceremony for the new mural honoring the Texas Rangers in Alpine. The mural, located at the Prescription Shop, was painted by Stylle Read, who has done many of the murals in town, and was commissioned by Alpine Artwalk. Moreland then traveled to Marfa to close out a night of music at the Lost Horse Saloon.

Viva Big Bend ended with a free show presented by the City of Marfa, featuring Primo Carrasco of Marfa, and Paul Minor & the West Texas Tycoons at Planet Marfa. Minor spent time in this part of the state to record a solo album, called The Marfa Project,over 10 years ago, and he was also an owner of Padre’s back in its heyday.

Over in Alpine, fans packed Railroad Blues to hear the Selena tribute band, Bidi Bidi Banda, perform some of the slain-singer’s favorite hits, with Marfa musician Juan Tarango Martinez filling in on bass. Frontwoman Stephanie Bergara initiated a large cumbia circle filled with a mashup of tri-county residents, including a woman in crutches, until Alpine’s Doodlin’ Hogwallops wrapped up the festival. 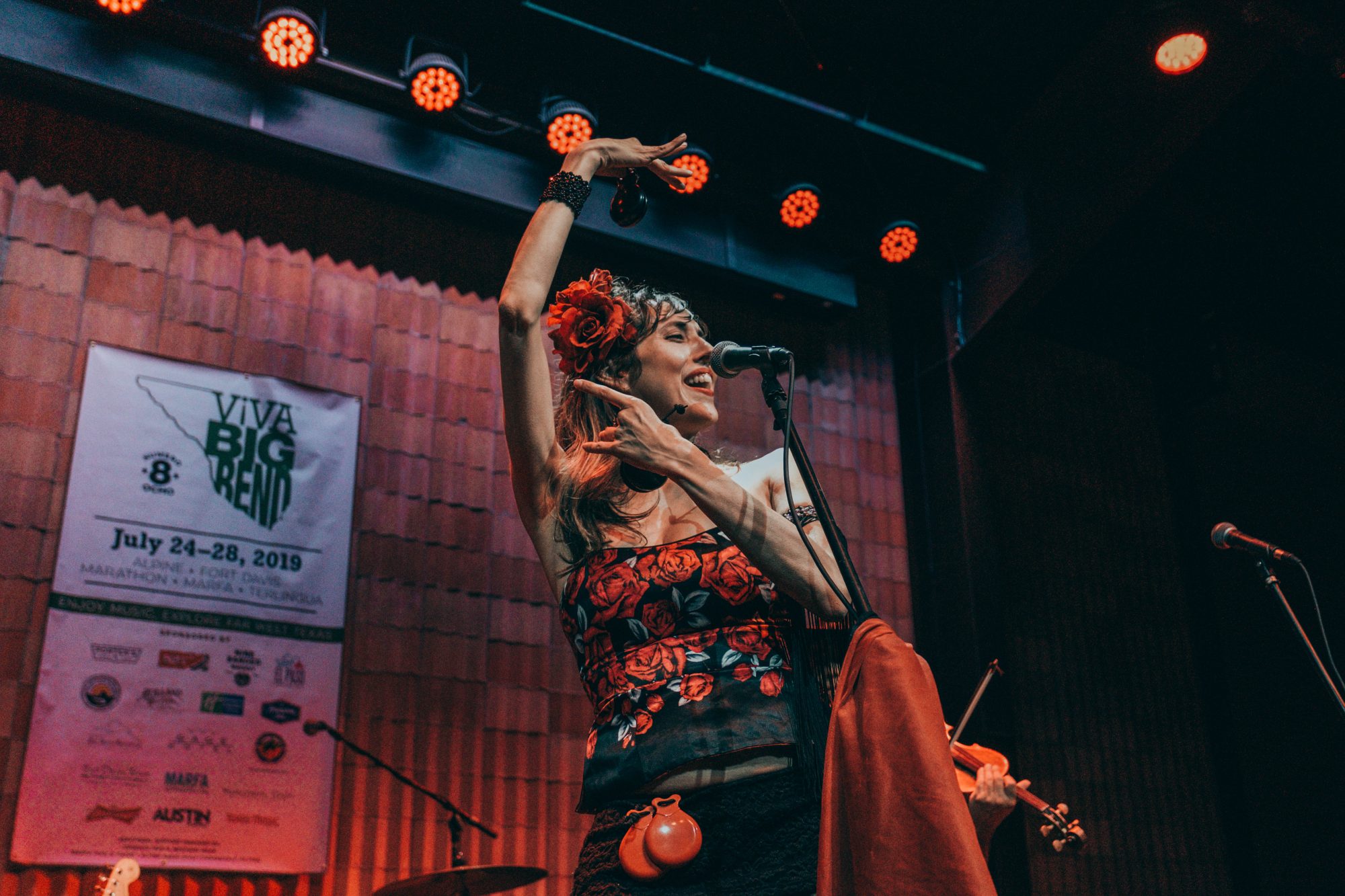 Patricia Vonne opened for The Tex-Mex All-Stars Saturday night at the Saint George Hall in Marfa. 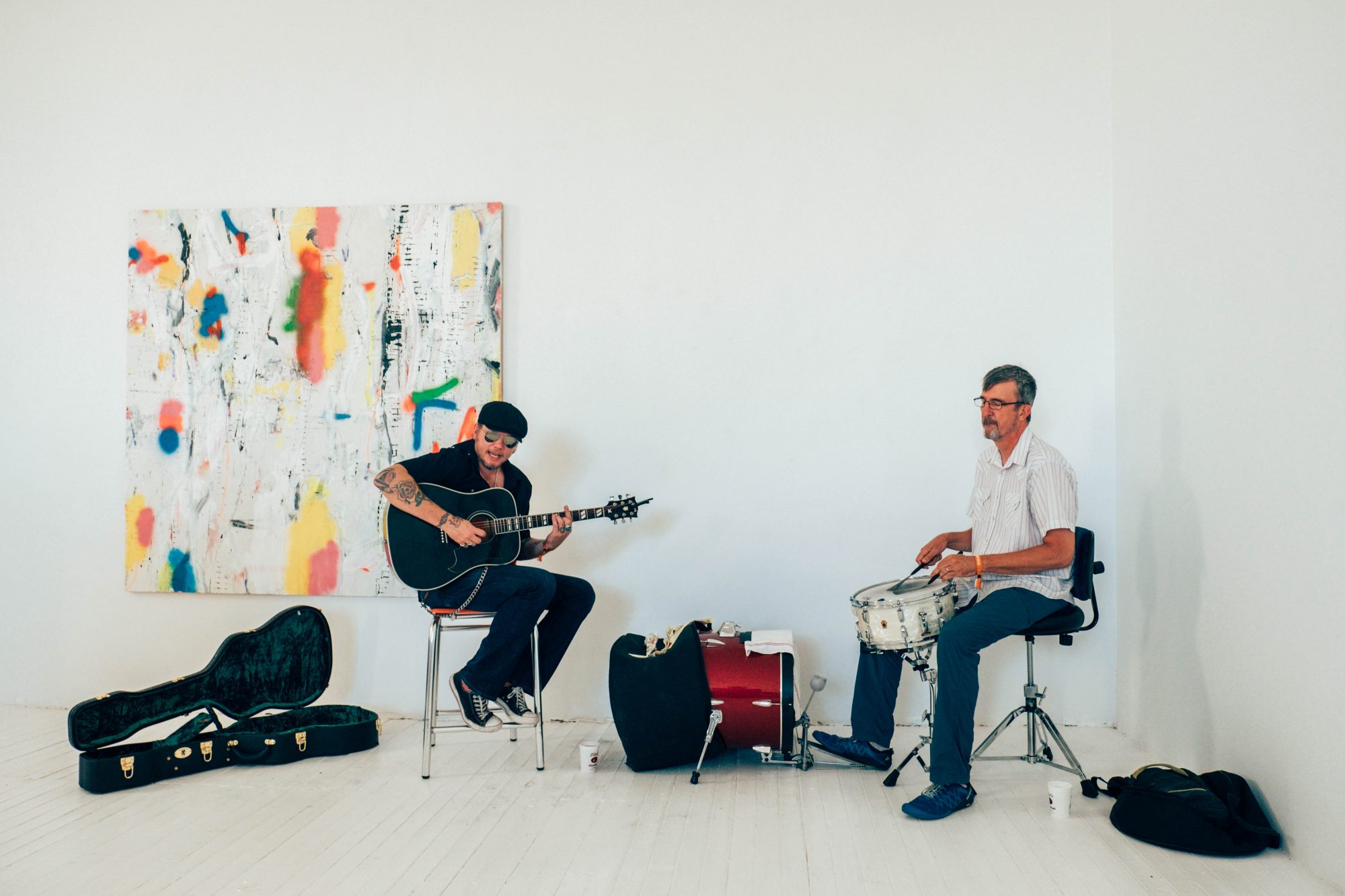 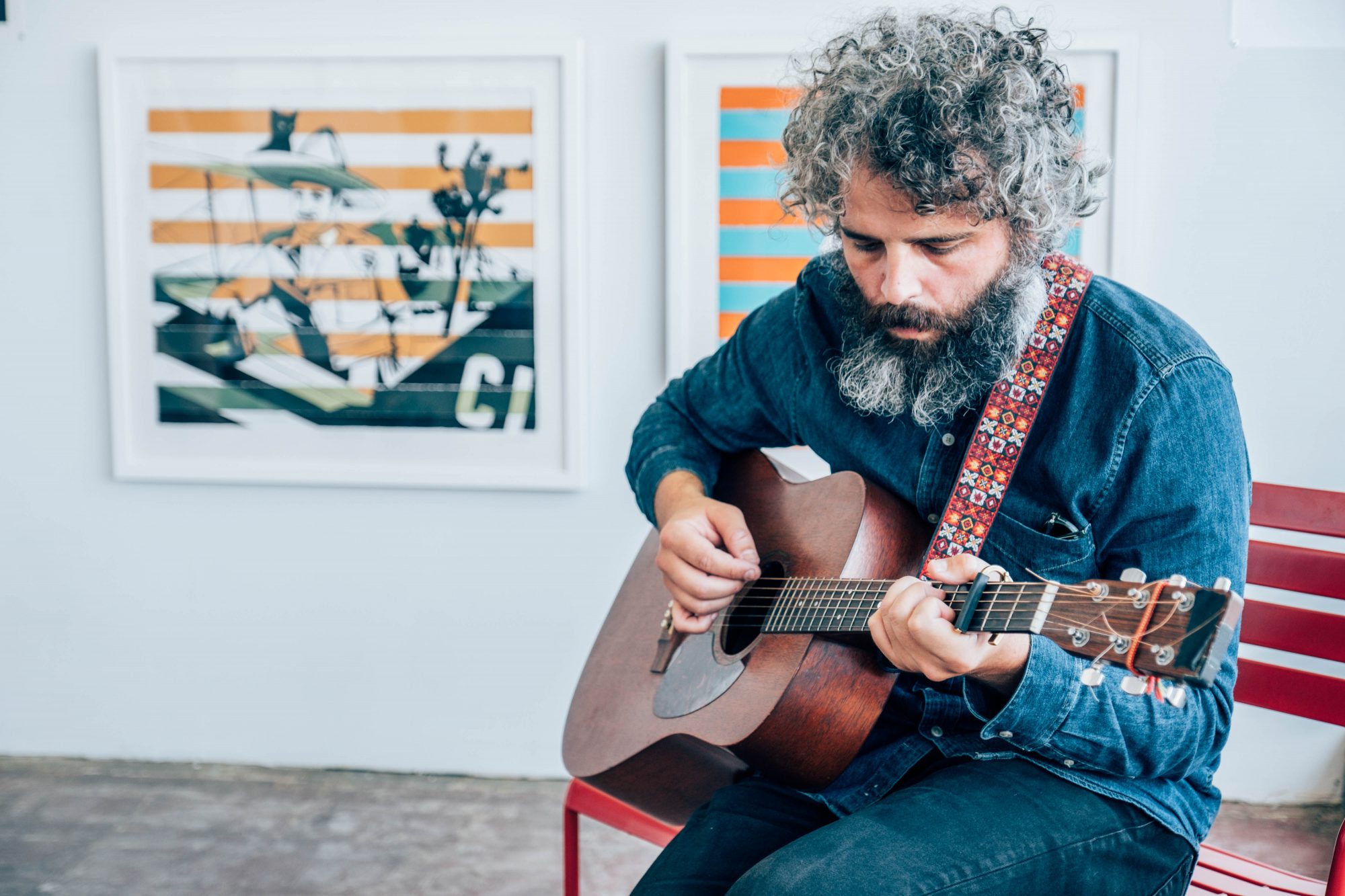 Rainstorm Brother performs at the VIP Happy Hour and art show benefitting Hi, How Are Your project at Big Bend Coffee Roasters. 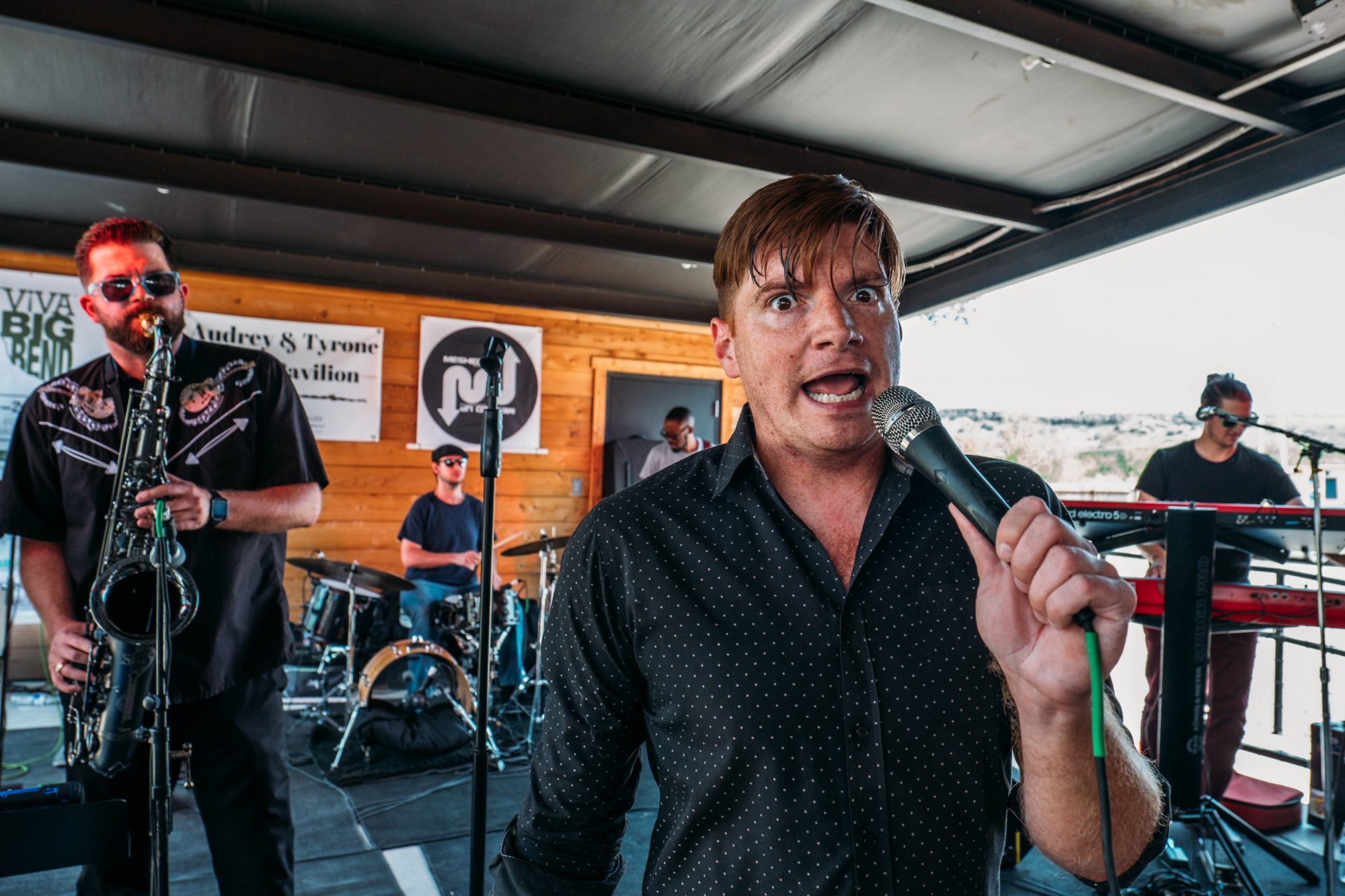 Soul-singer Donovan Keith entertains the crowd at the Kelly Pavilion in Fort Davis. 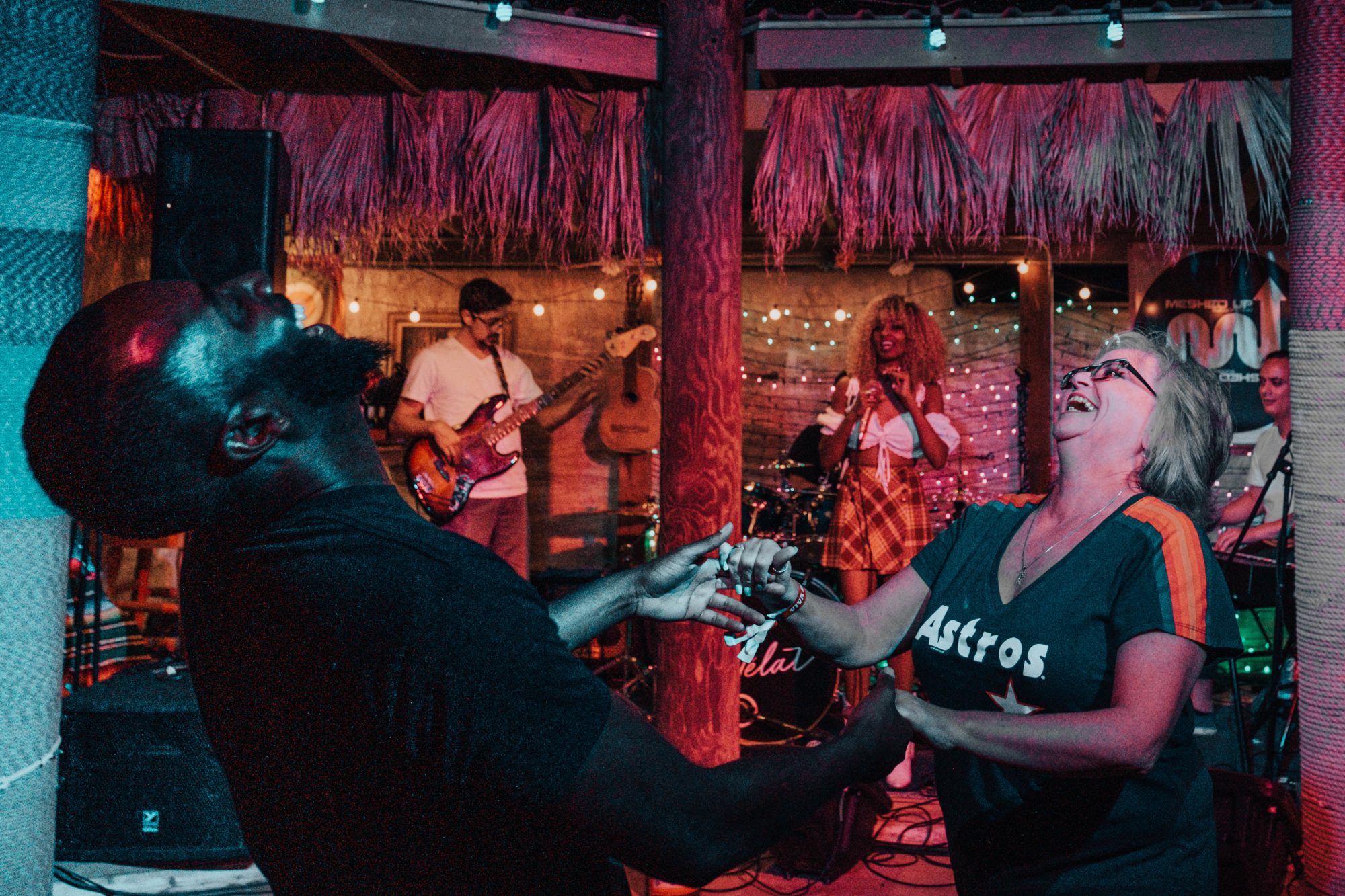 The crowd dances to R&B singer Mélat at Planet Marfa.