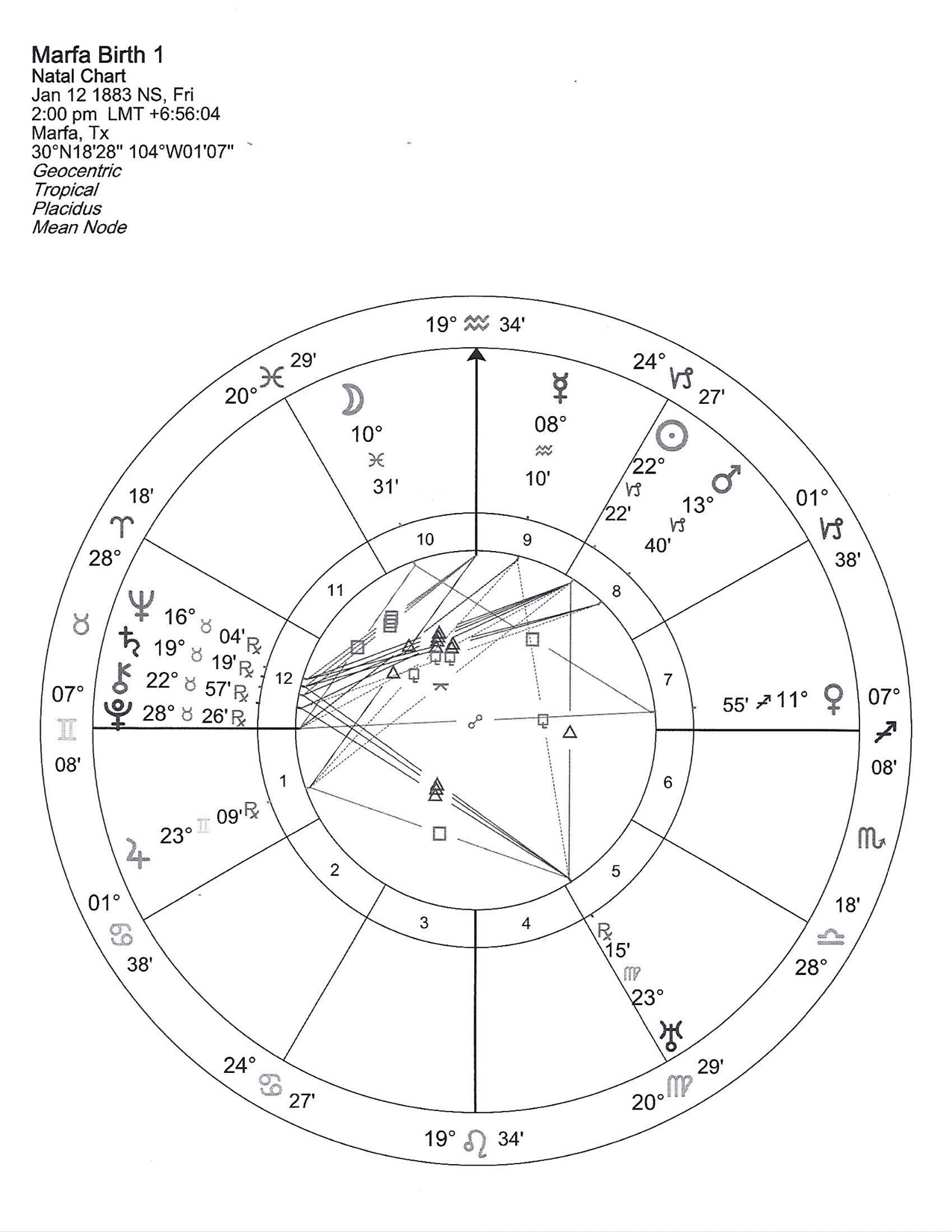 In Birth Chart Marfa: Part One, we explored Marfa’s gestation and birth. Determining that January 12, 1883, at precisely 2 p.m., was the foundational date for Marfastrology, we cast her natal chart. Bill Nolan, an astrologer with over 40 years of experience interpreting such celestial blueprints, made the following observation after studying Marfa’s newly-minted scorecard (see diagram above): “If this were the chart of a person, I would insist they regularly consult not one but two, maybe three, psychotherapists.”

Before we stampede for the salutary waters of Balmorhea (once it reopens), let’s take a deep breath. Yes, it’s true Marfa was foaled with a powerful stellium of Pluto, Neptune, Saturn and Chiron in her 12th House. In astrology, the 12th House is uncharitably called the dustbin of the horoscope, because it is here where we sweep away problems too painful to face. Let’s just say that it can be the kind of place that might give Stephen King a restless night. But it’s also a place of creativity, inspiration and hidden strengths. What’s more, this potent stellium is conjunct in Taurus, a zodiac sign which is patient, practical and earthy – all excellent qualities that help us survive and thrive in our high desert.

Like any good fake astrologer, I like to address the skeptics out there. You’re thinking: even if there’s a speck of verisimilitude to this Marfastrology business, how do we know that you’ve chosen the right birthdate? Well, if the cogent and exhaustive arguments presented in “Birth Chart Marfa: Part One” did not convince you, I offer a kind of astrological proof-checking. It’s known as chart rectification. Now granted, we’re not talking randomized, double-blind, placebo-controlled scientific protocol. But it is a technique which can test whether Marfa’s historical identity conforms with our natal chart assumptions. In other words, it’s an approach that’s got horse sense, a commodity well prized in these parts.

So what planets, signs, and aspects dominate Marfa’s birth chart? Appropriately for this column, we begin with Uranus. It occupies Marfa’s 5th House, the house of creativity and self-expression. What’s more, Uranus has the whole 5th House to itself – a powerful and exclusive accommodation. Where Uranus sets up shop, you get a place that’s iconic, quirky, unique, innovative, rebellious, freedom-loving and independent. Starting to sound a little familiar? To strengthen the brew, Uranus trines Marfa’s Sun sign Capricorn. The Sun sign of a person (or place) is how one shines out into life, and a trine is a favorable alignment. We end up with an interesting, if slightly schizoid, mix where unpredictable Uranus disrupts Capricornian caution and conventionality.

Uranus isn’t done. It’s also working behind the scenes, through a trine, to energize Marfa’s 12th House. And just to gild the desert lily, Marfa’s Midheaven, which represents life’s direction and calling, is in the sign of Aquarius (see the upper vertical line in the chart below). Guess who rules Aquarius? Uranus, of course. Where you find Uranus in the horoscope is where you tend to do the unusual.

Now to Venus, our lead actress. She represents art, love, beauty, sensuality – and she’s got the full run of Marfa’s 7th House, the house of partnerships and relationships. So who has partnered with Marfa in this Venusian realm over the years? There’s opera and theatre, from the Marfa Opera House to the Crowley Theatre; literature, drama and poetry – from a Dostoevsky-reading railroad engineer’s wife to Marfa Book Co./Lannan Foundation/Marfa LiveArts; painting and sculpture, let me count the ways: Chinati Foundation/Judd Foundation/Ballroom Marfa/Building 98, and galleries and studios too numerous to mention. Marfa’s got Venus in spades.

Marfa’s Ascendant, the zodiac sign that was rising over the eastern horizon at the time of her birth, is in Gemini. The Ascendant represents how the world sees you, a sort of first impression. What’s key here is that Gemini is ruled by the planet Mercury, which governs transportation and communication. So how did the world first see Marfa? Quite literally, as a water stop for the Harrisburg, Galveston and San Antonio Railway. Bingo! Score another touchdown for chart rectification. And we can add a two-point conversion when it comes to communication. How many towns our size have an NPR station? How many communities this size host internationally acclaimed writers, poets, playwrights, musicians and dancers to regularly perform? How many whistle-stop tank towns still maintain a local newspaper? (And a darn good one at that, all conflict of interest aside.)

The planet Mercury itself occupies Marfa’s 9th House – the house of expanding one’s horizons. To begin with, Marfa was literally born with expansive horizons. Every morning we can waltz out our front door and behold a fabulous sky. It’s a huge part of why we’re all here, and a big part of what attracts travelers from so many distant lands. Speaking of expanding horizons, let’s not forget that world class observatory just up the road, or the Blue Origin Spaceport an hour’s drive from here. And another cosmic piece of the chart rectification puzzle falls into place.

We conclude with Marfa’s 12th House, the final house in the zodiac. This is the part of our chart that would compel any sane astrologer to give the zodiac equivalent of medical informed consent. That’s because we’ve got Saturn, Chiron, Neptune and Pluto all conjunct in our 12th House – the house of seclusion, secrets and the subconscious.

These house guests are dominant, slow-moving planetary bodies that exert strong and long-term influence on our affairs. To say that they can wear out their welcome would be an understatement. Let’s take them one at a time, beginning with Saturn. Described as the god of time, Saturn is about discipline, responsibility and knowing one’s limitations. This ancient teacher means serious business. He’s a demanding taskmaster who challenges us to succeed in this remote landscape that Spanish explorers once called despoblado. Saturn also rules Capricorn, Marfa’s Sun sign, which doubles down Saturn’s grinding effect.

Chiron, discovered in 1977, is variously described as an asteroid/comet/planetoid body orbiting our Sun between Saturn and Uranus. In Roman mythology, Chiron was a centaur and son of Saturn. (I guess Son of Saturn, while no picnic, beats Son of Sam). Centaurs are wild half-human, half-horse creatures given to excess, and occasionally still spotted at the Lost Horse on a Saturday night. But Chiron, mentored by Apollo, was gentle and gifted in the arts of medicine and music.

In astrology, Chiron symbolizes the “Wounded Healer,” successfully ministering to others but unable to cure himself. While his own wound could not be healed, his message is to learn how to live with that pain and prevent it from ever happening again. What has been the Marfa/Big Bend community’s greatest wound? I refer you to Lonn Taylor’s article “The Worst Thing That Ever Happened On The River,” included in his book Marfa for the Perplexed. It’s a historical account of the Porvenir Massacre on the night of January 27, 1918. That’s our Chiron.

Neptune may seem an odd bedfellow to take up residence in Marfa’s chart. After all, Neptune makes us think of the ocean, and there’s not much maritime activity up here on the Marfa Plateau (non-geologically speaking, that is). But Neptune also symbolizes the depths of imagination, the spirit and dream world, and escapism. It rules film and television, and Marfa is no stranger to the cinematic arts. Sadly, drug addiction is part of Neptune’s shadow side – and I’m afraid that Marfa cannot claim immunity in this arena.

To have Pluto in your natal 12th House is like inviting Al Capone to audit your taxes. Or asking Jeffrey Epstein to chaperone your junior prom. It’s Trouble, with a capital T that rhymes with P that stands for Pluto. This Greek god of the underworld is comfortable with that which is hidden from view. But Pluto is also about empowerment, reform and rebirth. To quote astrologers March and McEvers: “Where you find Pluto in the chart, you’ll find complexity; it is where you’ll have to solve problems alone and unaided.” Scary, but trust me brothers and sisters, Marfa has done it before and will do it again. We reinvented ourselves when Fort D.A. Russell closed in 1946. We survived a decade-long drought through the fifties. With each new crisis we found a new identity, or reformulated an old one, to keep our tank town on the map. As writer Sterry Butcher noted in her article “The Marfa Mystique”: “My theory is that Marfa’s isolation…forced its people to be open to the eccentricities of whoever came along…It’s an act of faith to be here – faith that it’ll all work out…”

Reinforcing that faith is the fact that Marfa’s natal 12th House is in the sign of Taurus. The Bull’s qualities of patience, practicality and earthiness help these outer planetary visitors become more comfortable with the real estate. What’s more, Marfa’s Sun sign is Capricorn, which connects us to the land, and how to thoughtfully and successfully live on it. In Marfa, even the cattle and sheep ranchers managed to get along.

Above all, the 12th House is known as a place of mystery. “Mystery Lights” anyone? First reported in 1883, we continue to celebrate them every Labor Day weekend. Now that’s what I call positive chart rectification. Albert Einstein wrote that the most beautiful and deepest experience anyone can have is a sense of the mysterious. And with that, the astrological defense for Marfa’s birth chart rests.

P.S. – As I write this column, and as you read it, Mercury is retrograde (through March 9).

So, as the Brits say, mind how you go.

Jack Copeland is a retired busboy radiologist and active Judd Foundation tour guide. Historical resources for this column include: “History of Marfa and Presidio County, Texas: 1535-1946,” by Cecilia Thompson; “Marfa for the Perplexed” by Lonn Taylor, with Foreword by Sterry Butcher. Astrology sources include: “The Only Way To Learn Astrology: Basic Principles, Vol 1,” by Marion March and Joan McEvers; and notes from astrologers Tom Brady and Bill Nolan.