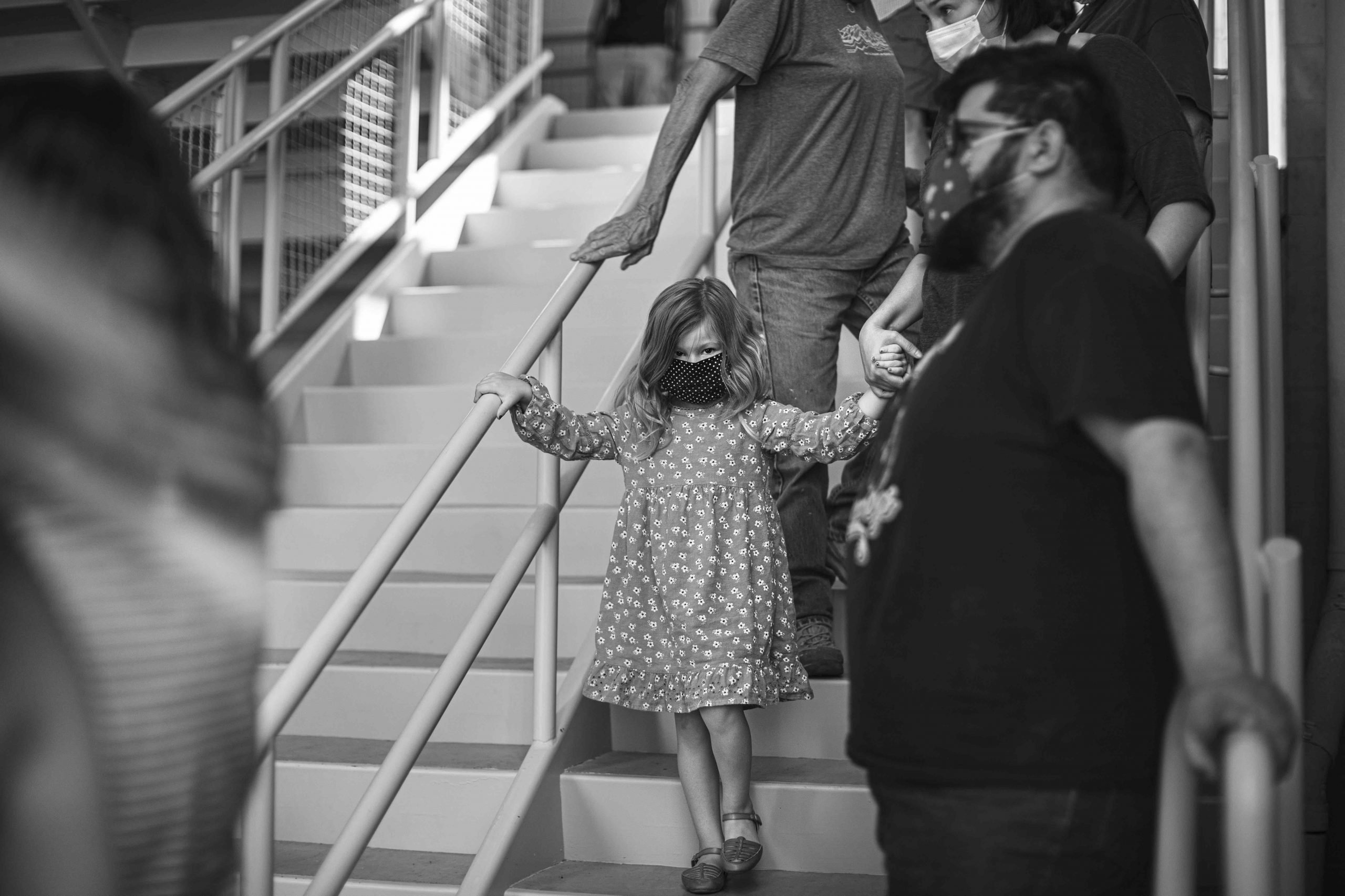 Magnolia Garza, 5, of Marathon waits with Melissa Garza in the stairwell at the Pete P. Gallego Center at SRSU on Friday to get tested for Covid-19 after officials moved testing inside. Photo by Maisie Crow.
Subscribe

TRI-COUNTY — Last week, as coronavirus case-counts in the tri-county continued to climb and residents grew more concerned, Pete Gallego, the new president of Sul Ross State University, put in a call to the office of Texas Governor Greg Abbott.

Gallego, who previously served in both the U.S. and Texas House of Representatives, hoped to ramp up testing in the region — and his call paid off. “I have to tell you, the governor’s office was extremely helpful,” Gallego said. “Within 24 hours of my phone call, we had a team on the ground.”

So began the tri-county’s biggest testing push to date. Testing in the region has so far mostly consisted of day-long mobile testing sites, as well as limited supplies at local clinics and the Big Bend Regional Medical Center. But with hardly a day’s notice, SRSU pulled off two-and-a-half days of back-to-back testing.

Working with Governor Abbott, the National Guard and the Texas Department of Emergency Management, Sul Ross opened testing on Thursday afternoon. Within hours, dozens of cars were lined up in the university parking lot.

By the time testing ended on Saturday, health officials at Sul Ross State University had managed to test more than 750 people. Gallego was thrilled with the results of the initiative, describing it on social media as “record-breaking turnout” for a small community like Alpine and “amazingly fast constituent service” on the part of state health officials.

Local health workers were also happy with the initiative. “Pete Gallego should be commended for making an attempt to get a reasonable amount of testing,” said Dr. J.P. Schwartz, the local health authority for Presidio County. “The governor has just absolutely abdicated any responsibility.”

The testing numbers from that two-and-a-half day blitz, Schwartz noted, were “more than has been done in the entire region.”

“That’s a heroic thing,” he added. “I hope they can continue.”

Locals were less effusive, though — and SRSU officials acknowledged the push faced logistical challenges. On Thursday, the high turnout overwhelmed testing officials, leaving residents waiting in their cars for hours. Some complained of running low on gasoline or needing to use the bathroom, Gallego said. Others left without getting tested.

Among them was Brielle Gonzales, a Marfa resident. As case-counts climbed in Marfa, she decided to get tested, just to be safe.

Gonzales showed up early for Thursday’s testing, thinking she could get ahead of the lines. Instead, it was a “total circus,” she said. There were around 100 people already in line, she said, and another dozen soon joined the line behind her.

Gonzales waited in line for hours, but “I was one of the cut-offs,” she added. A testing official came by and said they’d run out of tests. Gonzales left.

Shawn Shields, a Terlingua resident, had a similar experience. One of her friends had exposure to a coronavirus patient, Shields said. She wanted to make sure she didn’t have the disease.

“It was so incredibly weird and not organized,” Shields said of her experience at the SRSU testing site. And after waiting in line for around three hours, she said a National Guard official told her around 4 p.m. that they’d run out of tests. (A Sul Ross official said the site was short on time — not tests — and that any reports of test shortages were likely “a misunderstanding.”)

Hoping to bring better organization, Gallego said on social media on Thursday afternoon that reservations for testing, though not required, were “preferred.” But with such short notice for the initiative, there was no way to book an appointment through Texas’s online testing reservation system, TXCovidTest.org.

By Tuesday, the site was down “due to appointment availability,” according to a statement on the homepage. And meanwhile, the state’s phone reservation system, 512-883-2400, was experiencing two-hour wait times, according to a Sul Ross State University spokesperson.

Then, on Friday morning, officials made the abrupt decision to move testing inside the Pete P. Gallego Center. In a social media post that morning, Gallego cited the hot weather and concerns for the safety of National Guard test-takers. It also allowed officials to split people into two lines, in an effort to speed the process.

Still, the changes also meant that people worried about their coronavirus status were left to congregate not outside in their cars, but inside, in-person, where coronavirus can spread more easily. And while officials say they tried to maintain social distancing in the main testing area, people in line nonetheless crowded together on stairwells.

On Friday, another Marfa resident came by with several other residents. (He asked not to be named, citing concerns that people might interpret his interest in getting tested as a sign that he was a presumptive patient.) When officials abruptly moved testing inside, that group decided to leave.

“It just felt like they’d changed the procedure without considering safety protocol,” that resident said. Like Gonzales, he’s now also hoping to get tested this week in Marfa.

Shields, the Terlingua resident, also came back to try again on Friday. She waited in line outside for about an hour. But when the line continued on inside — where she worried she could be further exposed to coronavirus — she decided to once again leave.

Shields was angry about the experience. “I’m really mad at myself for walking into that building,” she said. She had spent months taking precautions, and she felt her Friday visit to get tested possibly put her at greater risk than she had experienced “through this entire pandemic.”

Shields was also angry at officials. She questioned why health officials had people congregate inside for coronavirus testing when “you don’t even let 10 people into the gas station.” And she questioned why National Guard testers couldn’t stand outside in West Texas weather for a day when some of them had likely served in the Middle East.

In his interview, SRSU President Gallego acknowledged that there had been issues with the testing push. “Logistically, an operation this size is always a challenge,” he said.

And as for the biggest criticism — regarding people waiting indoors for testing — Gallego said the National Guard, and not SRSU, had made that request. (The National Guard did not respond by press time to a request for comment about this decision and whether local safety was considered in making it.)

Last week’s scene further reflects the high demand and short supply for testing in the region. Texas has the seventh worst testing rates in the country, even as Governor Greg Abbott has continued with his “reopening” plans.

So far, the main way tri-county residents have been able to get tested has been through mobile testing sites that show up once every one or two weeks. It’s a situation Schwartz has called “sporadic.”

In a phone call on Tuesday, Schwartz said that benefits of increased testing outweigh any issues.

“We are so behind on testing. The state has totally dropped the ball,” he said. “I don’t see anybody but Pete Gallego attempting to do anything about it.”

He also defended health officials for their decision to move testing inside, noting that “heat stroke is a real thing.” And while some residents complained of crowding indoors, Schwartz said all residents in that line also had a personal responsibility.

“This is like wartime,” he said. “The authorities can do as reasonable a job as they think they can. But with COVID, you’ve got to take care of yourself.”

Gonzales, the Marfa resident, thought the high local demand for testing had added to the chaos.

“They thought maybe 20 people would come — maybe,” she said.“And the whole county showed up, and they didn’t know what to do.”

Like others who had tried and failed to get tested, she was annoyed with the experience. But when Gonzales realized the extent that local school officials went to organize the testing push, she was more understanding of the challenges.

“I’m glad Sul Ross at least stepped up to do something about it,” she said. “It’s a step in the right direction.”