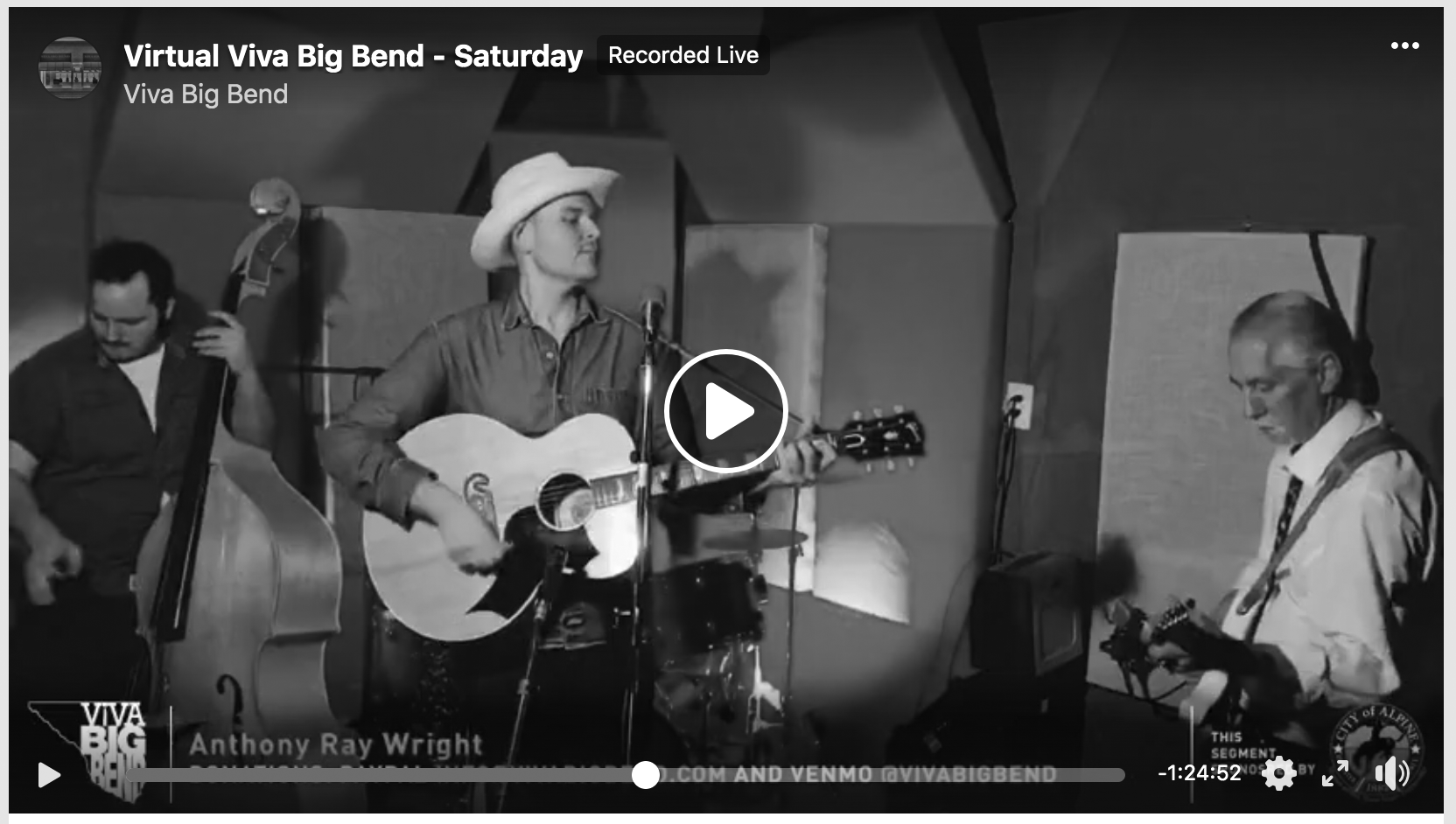 TRI-COUNTY — The ninth annual Viva Big Bend festival kicked off this weekend, with a mix of familiar music acts (Graham Wilkinson, Anthony Ray Wright and Chubby Knuckle Choir, for example) and the new addition of archival footage. But with the entire festival streamed online due to the coronavirus pandemic, founder/producer Stewart Ramser wasn’t sure if he should count this year as an actual festival.

To figure it out, he posed the question to attendees on social media. The answers, he said, were overwhelmingly positive.

“Unanimously, every single person was like, ‘This year counts,’” Ramser said. They told him that “we’re not there, but we’re watching it and having a festival.” And with that feedback in mind, Ramser decided that next year’s festival — currently scheduled to run from July 29 through August 1, 2021 — will officially be the 10th.

Ramser acknowledges that some aspects of Viva just weren’t the same this year. “I love the energy you get from having a full band,” he said — adding that with coronavirus restrictions still in place, “a lot of our artists right now are just playing solo.”

“It sounds great, but it’s different than if you’re in a live show and you’ve got the energy of the crowd feeding the band,” he said. “There’s just a buzz around it. That piece isn’t the same online.”

Still, for a festival that’s normally held at venues across the tri-county and this year was held at exactly zero, going virtual did have some perks. For one thing, Ramser — who in a normal year might be running around and figuring out logistics during Viva — got some time to sit back and enjoy the show himself.

And just as the organizer had hoped, holding a virtual Big Bend festival allowed people to attend no matter where they’re physically located. Attendees tuned into the livestreamed festival from at least as far away as Alaska.

In total, Ramser says, Viva’s three days of streams racked up 21,000 views. (By press time, the number had risen to at least 22,000, with the full show still available on the Viva Big Bend Facebook page.) Still, he stressed that number isn’t exactly analogous to ticket-counts.

“That doesn’t necessarily translate to people,” he said. “A person watching for the whole time would count as several different views.” By comparison, Viva Big Bend normally has a total attendance around 10,000 over the course of four days.

Instead of tickets, Viva this year took donations through Venmo and PayPal. In an interview Tuesday, Ramser said he hadn’t finished compiling numbers but estimated that donations were in the range of “several thousand.”

Those funds will be split three ways between the festival organizers, the bands and nonprofits like the West Texas Food Bank and Grand Companions. Not bad figures for a festival that normally sells tickets for around $45 to $60.

As coronavirus case counts started climbing across the state this year, planning for the festival proved complicated for Ramser and others. As recently as June, he told Marfa City Council that he was still hoping for an in-person celebration.

That same month, Governor Greg Abbott ordered the closure of bars — where Viva might have normally held a festival — and Ramser grew increasingly skeptical of holding an in-person event.

“If things were to go south and they were to start closing things back up, that’s a different story,” he previously told The Big Bend Sentinel. “It’s not a situation where we’re going forward regardless.” Viva started scaling back, landing on the current virtual format a few weeks ago.

“We probably changed formats eight times,” Ramser said this week. “We were working on this up until almost the time it started.” As the situation on the ground and orders from the state continued to change, Ramser found himself talking to musicians and constantly reassessing.

In the end, all things considered, he was pleased with how the festival turned out.

“It’s a unique festival,” he said. “I think it’s something that people can rally around and enjoy — even if they’re not all in the same place.”

“It’s my favorite weekend of the whole year,” Teresa Todd, city attorney for Marfa and county attorney for Jeff Davis County, said of the event. In a typical year, Todd might get some friends together and rent a hotel room, so they can stay out late enjoying the festivities.

This year was different, though: not only had coronavirus nixed a live festival, but Todd herself was quarantining after contact with someone who tested positive for coronavirus. Given those circumstances, a virtual festival was “the only way I could have experienced it anyway,” she said.

As a virtual attendee of Viva, Chris Ruggia enjoyed the event. And as the tourism director for Alpine, he also thought it was a success.

“Things like that that don’t require a visit — how I look at it is, it’s a longer-term promotion,” he added. In a normal year, city leaders and festival planners might have tried to bring tourists to the region. This year, though, it was about “keeping the area visible to people” so that “when things calm down,” the Big Bend region would still be “in their minds.”

Ruggia saw Viva as part of a larger effort to build up community spirit and morale while maintaining social distancing. For another example, he cited the 2020 #AlpineTXPhoto Contest, which increased its prize amounts this year to help support photographers.

“There was a lot less music than usual,” Ruggia added, and “the sets were short.” But for Texas state officials, there was apparently still enough music.

On Saturday, Chip Adams, an official at the Texas Music Office made an announcement via video: The state was formally recognizing Alpine as a music-friendly community. “That was cool,” Ruggia said. “It’s an extra thing for Alpine.”

And while Viva this year was interspersed with archival news footage and other clips, Ruggia said that — if anything — he and his wife saw more music. “I don’t stay up particularly late, I don’t drive at night and I don’t love crowds,” he said — normally disqualifying factors when it came to seeing some Viva Big Bend shows. But this year, “I saw the whole thing.” (He also played on Saturday with the band The Swifts.)

“In the comment threads, everybody who was watching seemed to really be into it,” he said. “There was a lot of enthusiasm expressed.”

For Ruggia, that was no surprise. “We had a really good time,” he said. “I really enjoyed watching it.”