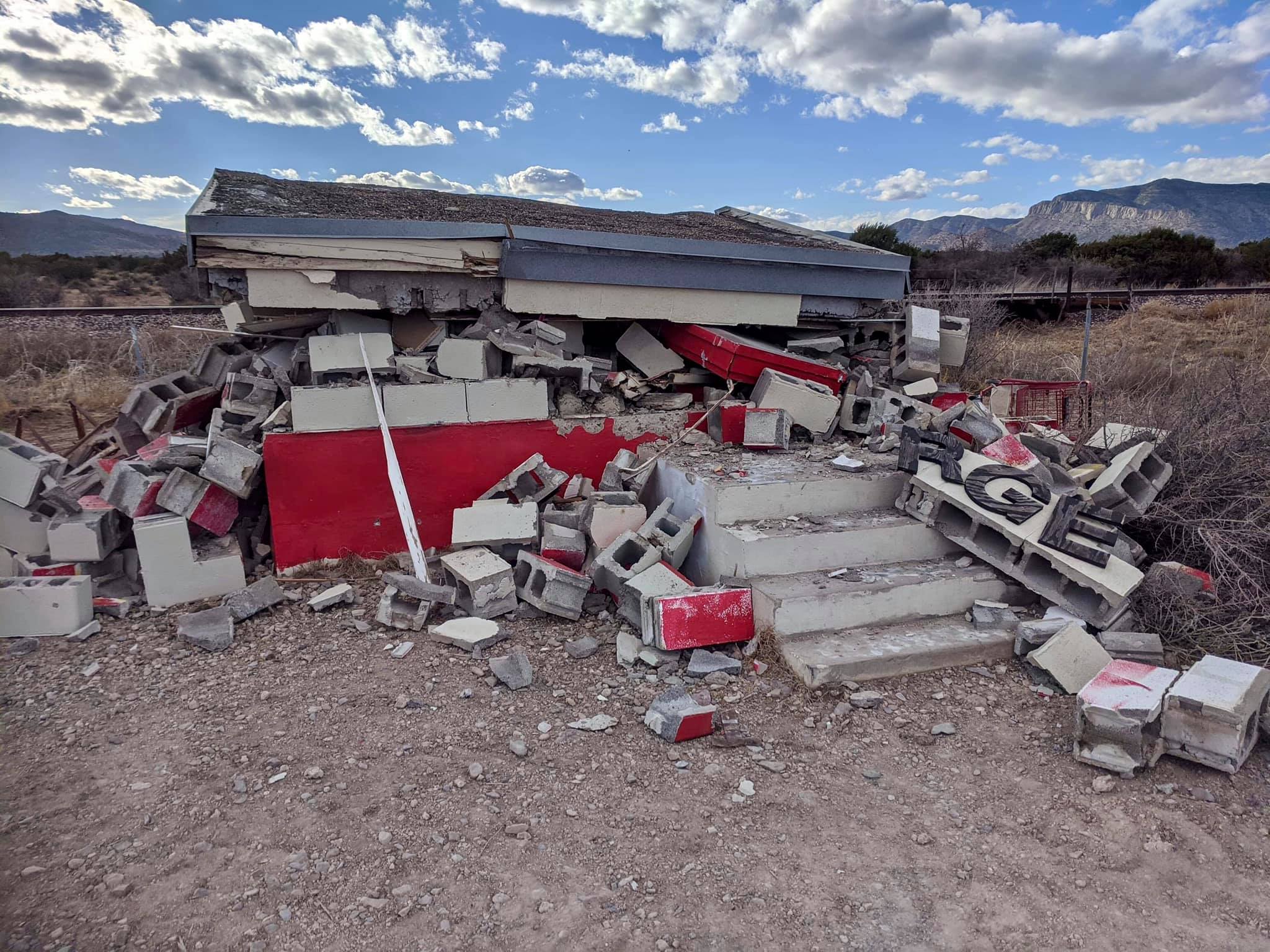 BREWSTER COUNTY — It was a funky public art destination and a draw for tourists in the region — but now, the Marathon Target is no more. Workers last week started demolishing the icon, posting a no-trespassing sign in front of rubble of the former landmark.

News of the demolition quickly spread far and wide. On social media, residents and tourists posted homages to Marathon Target and cracked jokes.

“I was just there on December 6th,” one person wrote. “[I] didn’t find any toilet paper.”

“It even had a Starbucks!” another person wrote. She posted a photo of a coffee cup in front of the Target.

A tongue-in-cheek parody of Prada Marfa, the Marathon Target was painted under the cover of darkness in 2016. To this day, no one has stepped forward to publicly claim credit for the piece. Given its proximity to the luxury store-inspired Prada installation, the two pieces shared a kinship.

The (relatively) nearby Prada Marfa, which was built by artists Michael Elmgreen and Ingar Dragset in 2005, was often seen as a critique on consumerism. But that message has become more muddled in recent years, as models and Instagram celebrities have flocked to the site for glamour shoots. In a 2009 paper, Nicky Ryan, a British art critic, argued the piece “unintentionally reinforced the capitalist values it criticised.”

In that sense, the Marathon Target was a working-class play on Prada Marfa, a fake store with a brand name and a cult following but without the high-end connotations. Tourists still flocked to the landmark, but models and influencers were less common.

There were no doors on the Marathon Target, meaning tourists could walk right in, even if they were technically trespassing. Someone later added a red shopping cart, but there was never any merchandise. That was a different experience from the one offered by Prada Marfa, which is closed to the public but suffered at least one break-in by burglars seeking designer shoes.

The Marathon Target, which was originally built as a railroad structure, had started falling into disrepair, Brewster County Sheriff Ronny Dodson said in an interview last week. Earlier this year, there was a local effort to repaint the building after it was heavily graffitied.

But the building was still a safety hazard, Dodson said — and the Paisano Cattle Company, which owns the property and never approved its status as a landmark, was growing tired of the trespassers. (The company did not respond to requests for comment.)

“People were taking bricks from it, and the structure was unsafe,” Dodson explained. “It was full of bees.” Making matters worse, social media posts show that in the hours before its demolition, someone had riddled the structure’s front wall with bullets.

Last week, Dodson said, the owners finally decided they’d had enough of the vandals, tourists and bees. After being demolished last week, the Marathon Target was finally bulldozed on Tuesday.