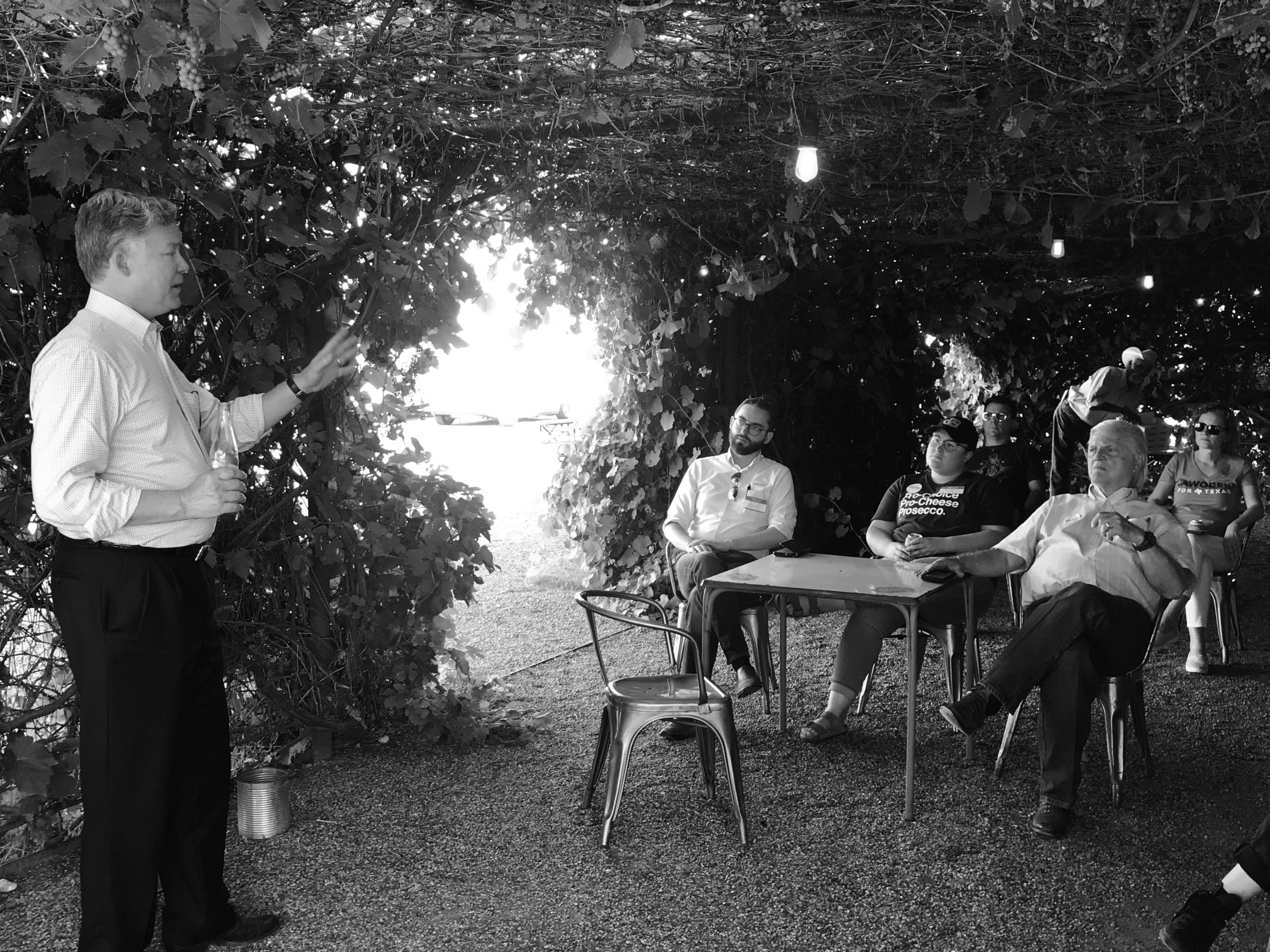 Staff Photo by Abbie Perrault / Democrat Joe Jaworski told West Texans about his candidacy for Attorney General at El Cosmico on Friday night, sharing his plans to end “frivolous” litigation in the office, support the effort to legalize recreational cannabis in Texas and turn the current AG’s Voter Fraud Division to a Civil Rights Division.
Subscribe

WEST TEXAS – Spring primaries and November 2022 general elections are still off in the distance, but in West Texas one candidate is already hitting the campaign trail. Last week, Joe Jaworski visited eight local cities on his “West Texas Swing,” hoping to shore up support for his bid to become the next attorney general of Texas.

The former Galveston City Council member, former mayor and longtime trial lawyer said that if elected into state office, he would stop the current AG’s practice of filing “frivolous” lawsuits, become a figurehead for the legalization of recreational cannabis and offer his office’s support to local governments.

“Your local government cares about you – your mayors, your county judges, your school superintendents – and right now the GOP leadership is in an ideological battle with local control,” Jaworski told residents during his campaign stop in Marfa. “[Local control] is something that Republicans used to promote as part of their ideology and they have long abandoned it.”

In the tri-county area, counties and cities had power wrested from their hands just last year when the governor created coronavirus-related ordinances that superseded local ones. The current administration has also limited local ordinances elsewhere.

“If you want to have a plastic bag ban in Corpus Christi, or if you want to limit aggregate mining in Kerr County because you’re worried about the purity of the Guadalupe River, or if you want to do any other innovation on voting like Harris County did, and it’s not black letter law legal –– have at it. I’ll have your back, because I’m a former mayor and I understand the incubator innovation that local government brings.”

Alpine residents Doug Gray and Asia Cornelius came out to the event at El Cosmico on Friday knowing little about Jaworski but hoping to learn more about the candidate. For Cornelius, two things from his speech resonated. Jaworski addressed the new legislation that would allow anyone in Texas to sue any person who accesses an abortion or helps in the provision of one, speaking vehemently against it.

The two Alpine residents especially liked one proposal from Jaworski’s platform: to convert Paxton’s Voter Fraud Division into a Civil Rights Division. “How in God’s name does an AG’s office anywhere not have a civil rights division?” Jaworski exclaimed in a passionate moment before a small crowd of about a dozen.

“As a Black woman, I’m a minority in two ways, so those are issues that I think about a lot. It was nice that he talked about that,” Cornelius said, with Grey adding, “Representation matters, so if it makes people feel more comfortable, it’s important.”

If elected, Jaworski said another major goal is to end the numerous lawsuits the state has brought against the federal government. He was very outspoken about his distaste for current AG Ken Paxton during his visit to Marfa. Paxton has often used his time in office to challenge the federal government, bringing lawsuits over presidential election results in Georgia and Wisconsin, various immigration issues and trying to stop the expansion of Medicaid in Texas.

“It is a culture war posing as a government, what we have right now. It’s wrong, it’s not the way it’s supposed to be,” Jaworski said. He also threw jabs at the embattled incumbent who is facing a securities fraud indictment from 2015 and an FBI investigation for potentially abusing his power in office to help a wealthy donor. Paxton has denied guilt on both.

Still, Jaworski believes his advantage –– even as a Democrat in a red state –– is the coming battle within the Republican AG primary. The incumbent faces two challengers, George P. Bush and Eva Guzman. “When they spend lots of money cutting each other up as to how bad the other is, and how they are the only one worthy of Trump’s endorsement, let reasonable Republicans, Independents and Libertarians, and all Democrats take notice and say, ‘That’s just not going to work anymore,’” he said.

While Jaworski was still unchallenged during his West Texas Swing tour, by Tuesday, he found his first primary opponent. Civil rights attorney Lee Merritt announced he would run on the Democratic ticket, becoming the first challenger to Jaworski’s primary campaign.

Jaworski faces an uphill battle in a state where recent elections have yielded very few victories for the Democrats, but he isn’t deterred. He asserted, “I think if the Democrats have a positive, productive policy, this will be our year.”