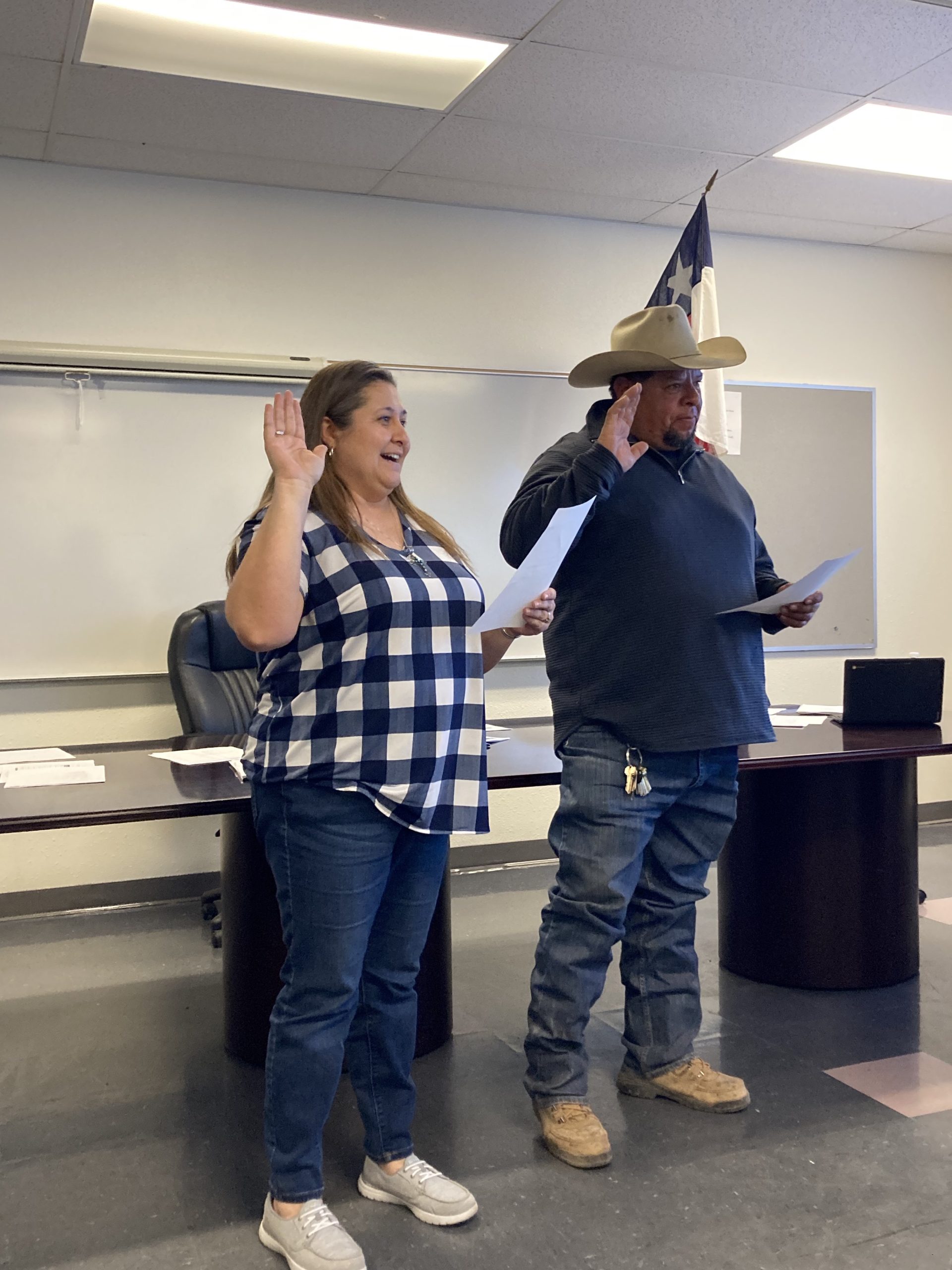 MARFA — The Marfa Independent School District board room was abuzz Monday night as board members, staff, and students clutching trifold poster boards shuffled into the crowded room where nearly every plastic school chair was occupied.

The meeting began with a jump to new business — the cancellation of the May 7 general election. Traditionally held in conjunction with the city’s city council election, the joint election will be canceled this year due to a lack of candidates. Superintendent Oscar Aguero said they had exactly four applicants for the four open slots.

Current board members Teresa Nuñez and Ernie Villarreal will keep their positions. Katie Price-Fowlkes, who resigned from the board last month, was originally going to stay on the board until April but she and Shawn Brugette resigned effective this week in order to be replaced by two new board members. The board unanimously accepted their resignations.

Aguero said there were a few options moving forward but his recommendation was to appoint the new board members as soon as possible in order to have a full eight-person board.

Lori Flores, the city utilities clerk who previously served on the school board, and Ruben Martinez, the father of Marfa ISD eighth grader and maintenance tech crew chief with the Texas Highways Department, will be filling in for Price-Fowlkes and Brugette respectively. Martinez, Nuñez and Villarreal will be sworn in for their three-year terms in May. Flores will also be re-sworn in come May to serve the remainder of Price-Fowlkes’ term, which is up in May 2023.

Their appointment passed unanimously among the council and they were sworn in by the superintendent’s secretary, Griselda Hinojos, who delivered the oath of office. The freshly sworn-in members then took their seats at the board table to a round of applause from meeting attendees. All board members were now present.

Next the meeting advanced to the reports from staff, with High School Principal Allison Scott honoring the students whose presentations recently advanced to the national science fair. Alexis Gonzales, Juan Avila and Aubrie Aguilar showed off their project “Germs and You” to the board. Aguilar also received fourth place in a University Interscholastic League (UIL) film competition for her short film, “Heartbeat,” Scott said.

Next to present to the board was Clint Alsobrook, regional manager with Texas Association of School Boards. He walked the board through an online “Educational Facility Services” dashboard which graded the district’s facilities on many levels, from ADA compliance to safety and security. The dashboard outlined priority projects, which included HVAC upgrades as well as roof repair and associated costs.

Alsobrook said many school facilities were operating with over 15-year-old equipment.

“The HVAC, plumbing — you’ve got units that are past their anticipated life. So it’s something that does need to be addressed relatively quick,” said Alsobrook.

Aguero then discussed the ongoing issue of district infrastructure upgrades — from school security to HVAC replacement.

Aguero said while they will be taking nearly a million dollars out of their fund balance account for the new track, they will likely need to tap into fund balance again for some of the major infrastructure repairs that are needed for the facilities. The elementary school is unable to open windows, he said, as he gave board members a heads up that expenses were on the horizon.

“I do believe in the next few years, [we will be] lowering our fund balance to be able to fix some things to make improvements. I just want you to know that I’m probably gonna come to you about spending money,” said Aguero.

He said the district has $350,000 budgeted for maintenance this cycle that they should start using for such projects. It might be possible to use ESSER funds — COVID-relief grant monies — for HVAC repairs, but restrictions on how to use those funds are tricky, said Aguero.

Aguero said an estimate to upgrade locks on both campuses came out to $200,000, and security camera upgrades were coming in around $28,000, not including both gyms.

The option to put up fencing around both campuses came up, in order to create one entry and one exit and cut down on the numerous access points — the elementary school has a total of eight entrances and the high school a total of 15.

“So let’s say we go out and go perimeter, one entrance, one exit, we could cut down the cost on the locks,” said Board Member Rene Gonzales.

A fence, which Aguero said would cost around $100,000 to $150,000, would allow them time to save money for the next layer of security, he suggested. But fencing off the brand new track to resident use didn’t make sense, said Aguero. In the end, no decisions on new security were made but most voiced support for the fence concept.

Aguero then reported three active COVID cases across both campuses and said the school would continue performing vaccination clinics and testing. The district’s website is now tracking COVID cases, but hasn’t been updated since late January, which Aguero said he would remedy.

The 62 percent is classified as “approaches expectations,” not “meets expectations,” the desired benchmark. Aguero said it was important to consider the numerous changes brought on by the pandemic, but the score needs to improve in the future.

Similar to the track overhaul, a renovation of the district’s auditorium has been long discussed, said Aguero, and now was the time to act. He said auditorium upgrades would signal that the district cares about all students, not just student athletes.

“Not every kid is going to be super excited that we got a brand new track. It’s a different thing that says, hey, look, now we have this to perform in,” said Aguero.

Bianca Gonzalez, business specialist with MISD, was present at the meeting to present her findings on what an auditorium renovation would look like. The existing auditorium is not suiting the needs of the students, she said, and one of the major upgrades to the space would be to lengthen the stage so it is the proper size for one act plays. Also on the wishlist are new seats, a new floor, lighting and sound upgrades, electrical upgrades, plus a new HVAC. The existing facility is not ADA compliant, which would also be addressed.

Many alumni in the room recalled the unchanging ‘80s sound equipment and stagnation of the performance space. Seat removal estimates were coming in at $14,500, with the cost of new seats and installation totaling around $65,000. Gonzalez was still working on a flooring estimate, she said.

New seats, floors, and lengthening the stage are the primary objects for the immediate future. The ideal timeline would be to start the project in the spring or summer and complete it in time for one act play season next December, said Gonzalez.

There is an available $8,700 donation for the project, but the board would like to raise additional money and will likely take $71,000 out of fund balance for the effort. Aguero said money raised could possibly be put back into fund balance. Maybe they could offer commemorative plaques or host a fundraising event, some said, and partner with boosters and PTO.

Nuñez said a nice, new auditorium would help boost students’ pride in their school. Others commented on the auditorium as a space for visitors, similar to the track. Scott said the high school’s one act play program garnered a lot of interest this year and students would only be more attracted to participating in performing arts with an upgraded facility.

“I think having that auditorium will build that enthusiasm even more,” said Scott.

The board, prompted by Villarreal, discussed rental fees for teaching living in district-provided housing. There was discussion of lowering rent for the homes, and Aguero said they would readdress the matter when leases are up in May.

In contrast to the start of the meeting, only board members and a couple of staff members remained when the board reconvened from a lengthy executive session. Board Secretary Nuñez announced they would accept the resignations of teachers Melanie Harms and Amy Mackie, effective at the end of the 2022 school year, and the meeting adjourned.

MISD marfa schools
Stay in touch with The Sentinel
Related